GeoEx’s Story Krishman, just back from China, shares her experiences about the country, China tourism, and some of her photos.

What Surprised Me Most About China

Visiting China was one of my most memorable trips to date. Truthfully, though, I was a bit nervous before the trip. I had heard China can be quite the culture shock for first-time visitors. I knew that at some point I would have to deal with lack of personal space, smog, chopsticks, and traffic. I also heard that being a tall woman with blond hair would elicit a lot of touching and staring from Chinese people who don’t see many Western tourists. So I was nervous about all the cultural differences—and about the sheer number of people. It’s staggering to think that there are 1.4 billion people living in China, and just in Beijing (where the Forbidden City is located), the population is 21 million. Shanghai’s population is over 24 million!

Luckily, I traveled to China in November, which is the off-season, so the crowds were less than usual. There were still a lot of people, but I had the luxury of experiencing the vastness of the Forbidden City with plenty of space—and I even had a moment on the Great Wall where there was no one else around! I think I got lucky that day on the Great Wall, but as I progressed through my trip and began to understand China, I realized that to have an immersive experience in China, you have to embrace the feeling of being surrounded by lots of people. That is China. 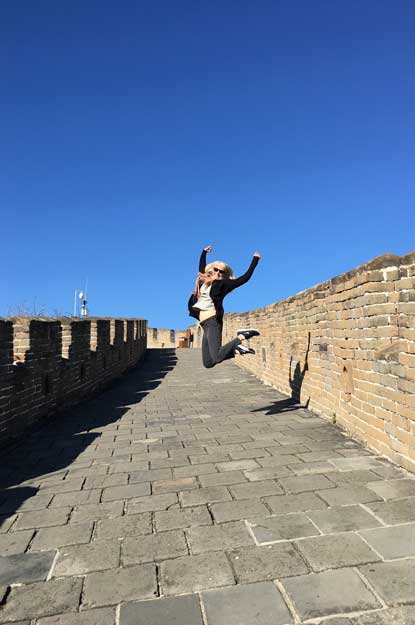 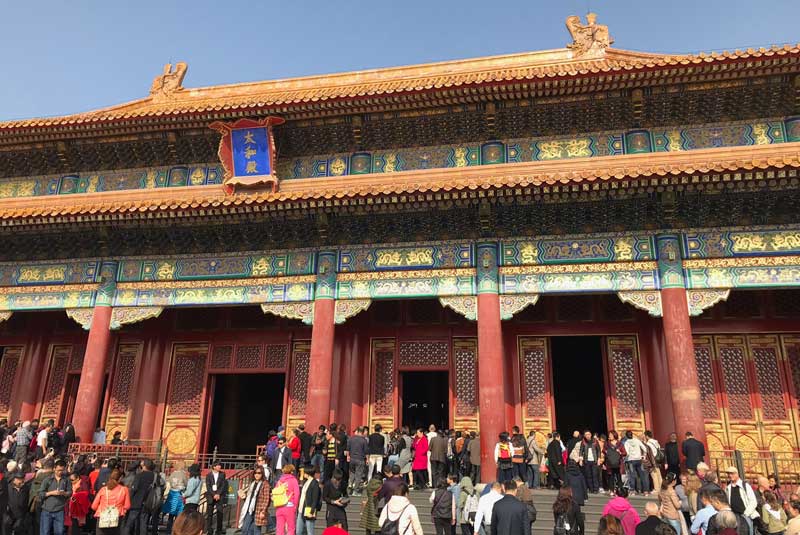 My Major Challenge on the Trip

It’s hard to ignore the pollution in China. You see it when you fly into the cities and you feel it as you walk around. It’s harder to breathe, it burns your eyes and turns everything a dreary gray color. Some days are better than others, though, and adding stops on the itinerary to areas outside the big cities was helpful. One surprising benefit is that the pollution opened conversation with my Beijing guide about her life. I learned how locals feel about the government of China in a real-life way that I wouldn’t normally be privy to. She told me that the government now restricts the number of cars on the road by determining what days of the week residents can drive based on their license plate number. Since a family is only allowed one car, it’s a challenge when there are two parents with jobs and children to get to school. 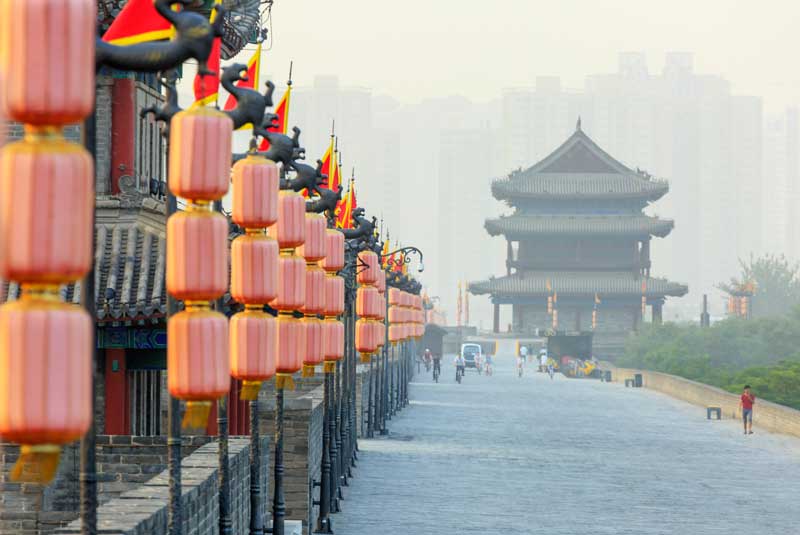 My Most Memorable Moment

I loved the Muslim quarter in Xian! Xian was the starting point of the ancient Silk Road a thousand years ago and attracted many merchants from Arabic countries who eventually settled in the area. The Muslim quarter street market was so exciting. Lined with unending food stalls serving handmade Muslim food prepared using traditional Chinese cooking methods, it was a street food-lover’s dream. Typical dishes included buns stuffed with marinated lamb, persimmonpies, barbecued meats on skewers, and those famous dumplings and cold noodles made from rice or flour. It wasamazing to wander, taking in the sights, sounds, and smells. It gave me asense of what real life is like in that community. 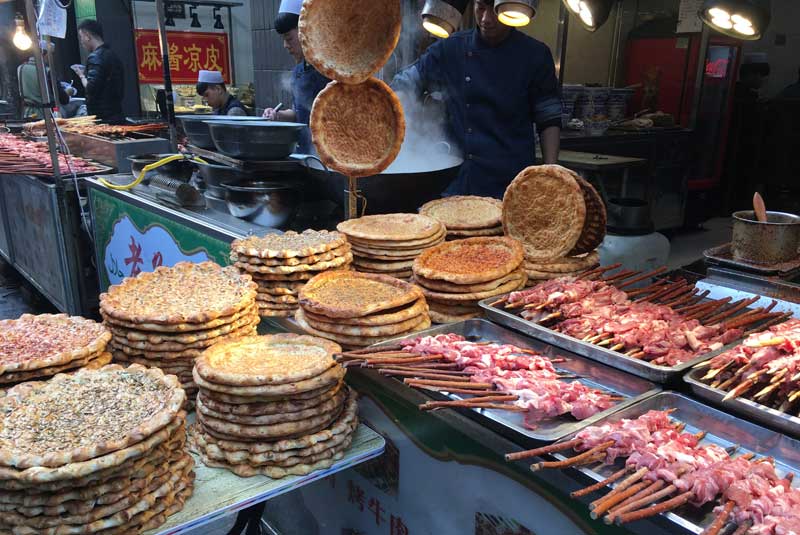 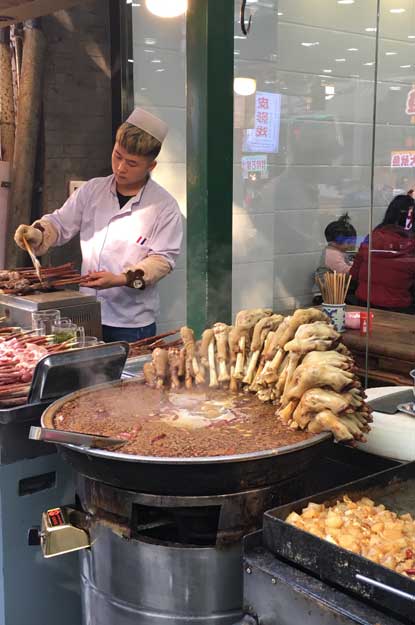 My Biggest Takeaway From My Journey

I found the locals to be friendly and curious about me and my life. They had as many questions for me as I did for them. I also found tourism in China to be different from what I expected. I had romantic visions of the Great Wall, the Terracotta Warriors, and cruising down the Li River. I envisioned these peaceful and sacred sites as places of reflection and awe. Although they are breathtakingly grand, there was a feeling of being at a Disneyland attraction, with parking lots full of tourist buses, zig-zagging rope lines with long queues, and cheesy, picture-taking set-ups everywhere. Since most of the tourism in China is domestic, I realized these sites are geared toward the Chinese tourist, not the Western traveler. I had to let go of my expectations of how I wanted to see China’s ancient structures and natural wonders. I had to let go of my notions of how I think historical sites should be experienced and I especially had to let go of my disappointment at seeing Starbucks on the way to the Terracotta Warriors. I had to adapt and experience China like China wanted me to experience it. But I loved my visit and once I relaxed and let China just happen to me—like embracing the opportunity to sled down from the Great Wall on a giant slide—I learned more about the country than any other country I have ever visited. 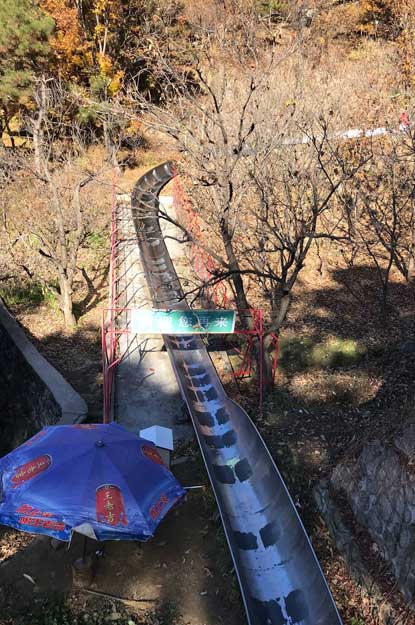 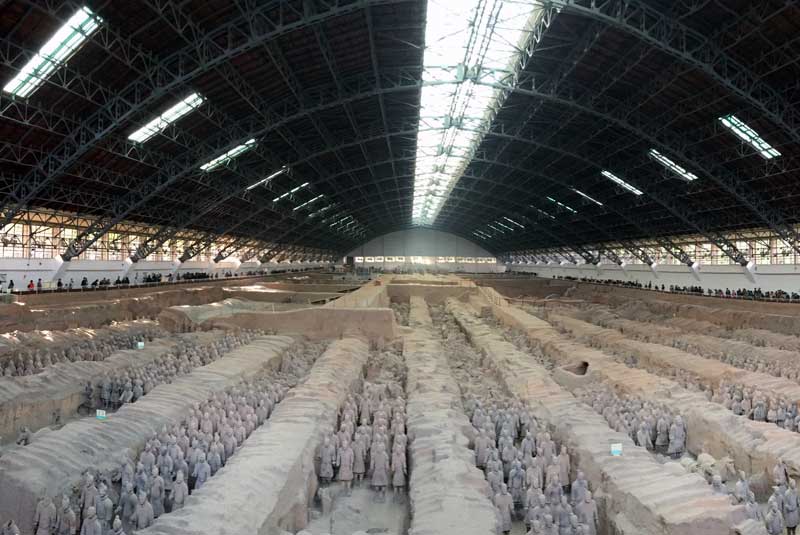 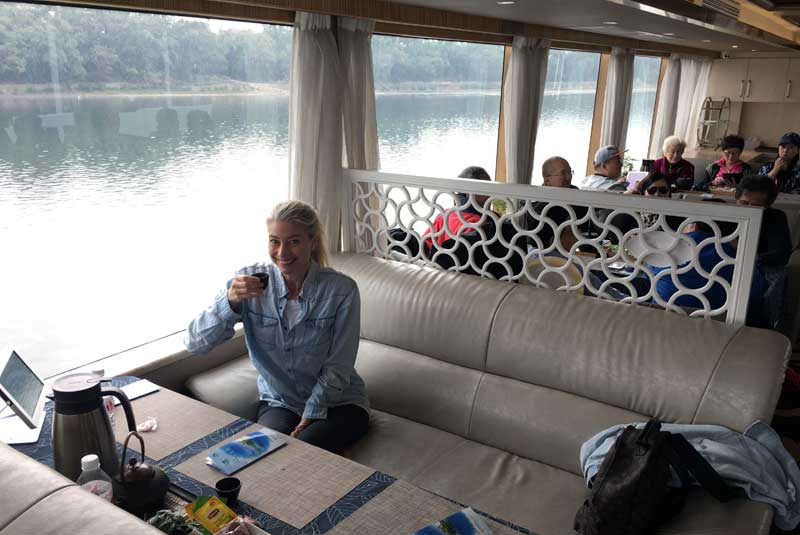 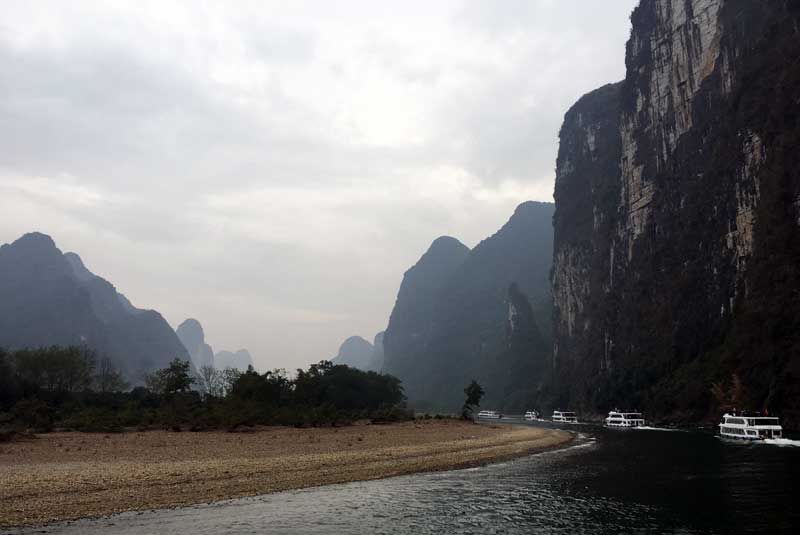 My Advice for China Travelers

I would recommend going in the off-season to avoid the crazy crowds. Be open to feeling like part of the masses when visiting major sites like the Forbidden City and the Terracotta Warriors. It’s also important to understand how the Chinese want you to view their country. They are so proud of the level of luxury they can impress us with. The hotels were over-the-top beautiful and there are amazing restaurants that are not traditional Chinese. If you fight it, you might not get a glimpse of what China is really like and how the people feel about their history, their government, and their future. 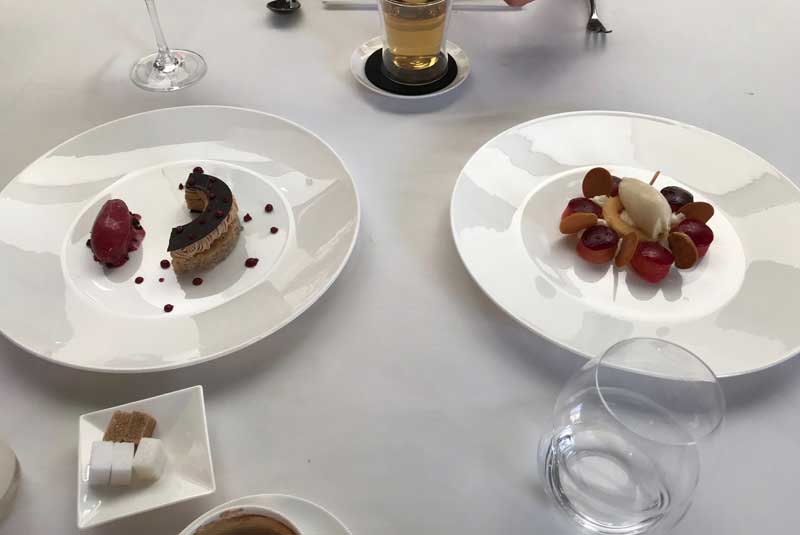 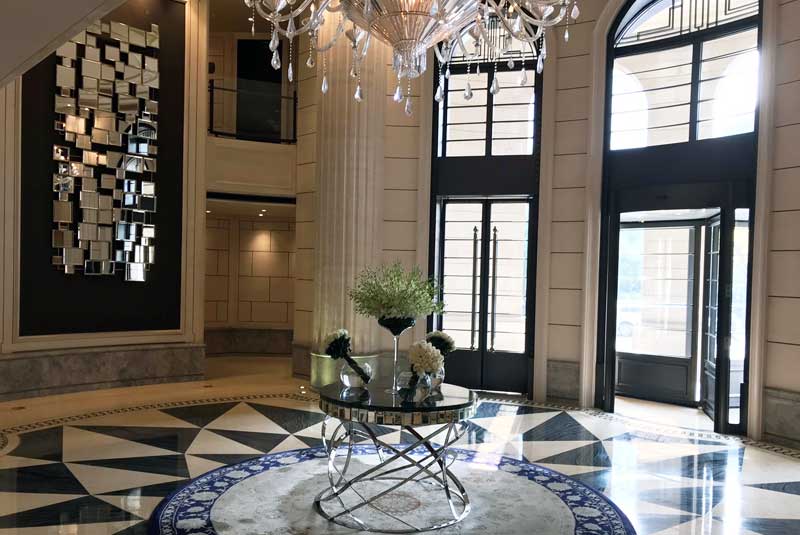 Shanghai was one of the most fascinating cities I’ve been to, but progress is happening so fast that the old neighborhoods are quickly disappearing. To see the layers of Shanghai and understand the deep history of the city, I think it’s important to go now. In a few years, the old will all be replaced with new. 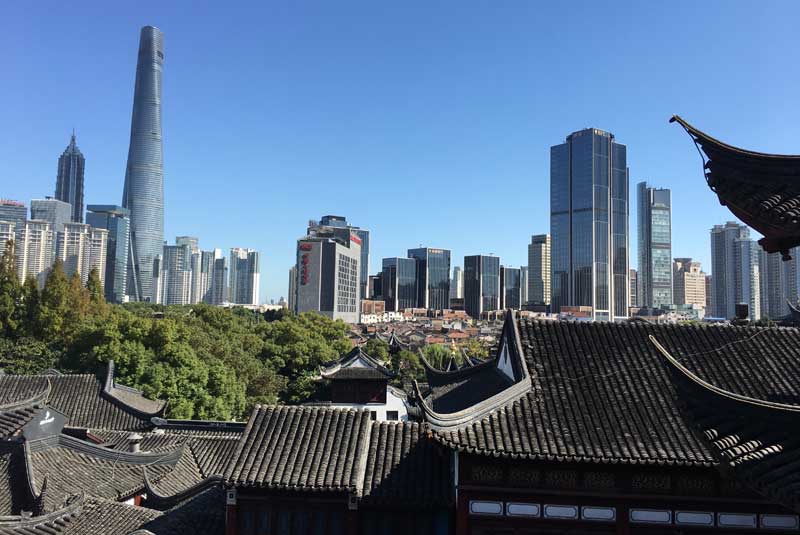 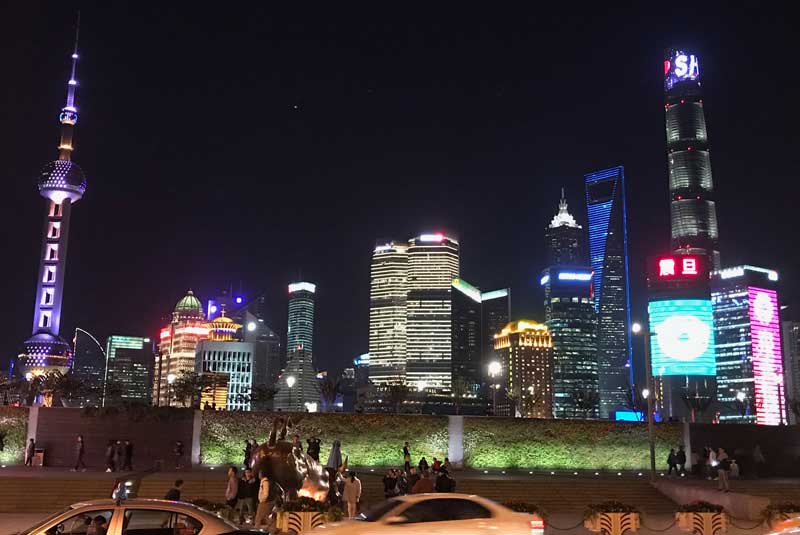 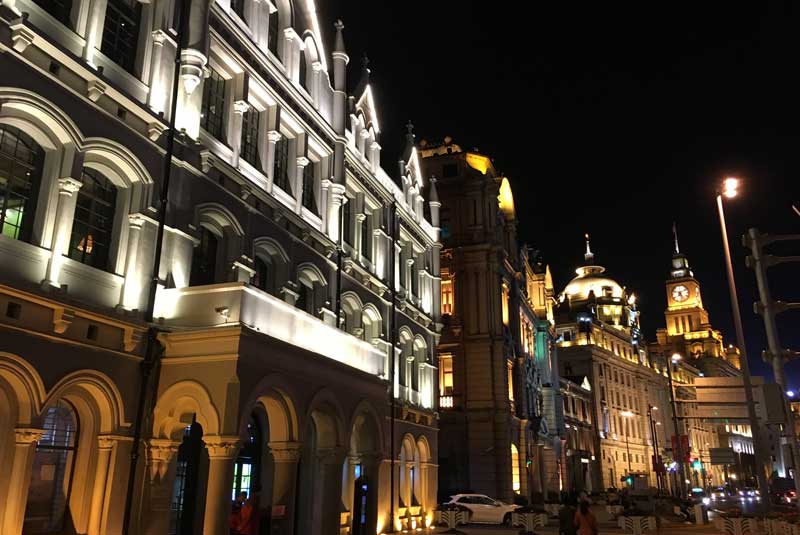 Lastly, I would say to just go! Don’t let anxiety about cultural differences turn you away. It is truly an unforgettable travel experience.

Story Kirshman is the Director of Digital Marketing for GeoEx. This was her first trip to China, but definitely not her last! 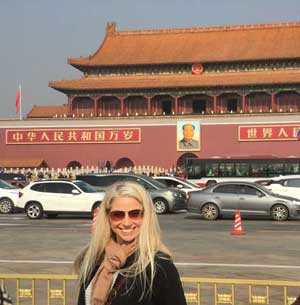 To explore GeoEx’s options for travel to China, browse our selection of China trips.