Travel to Cuba | Parrandas and Carnivals in Cuba | GeoEx 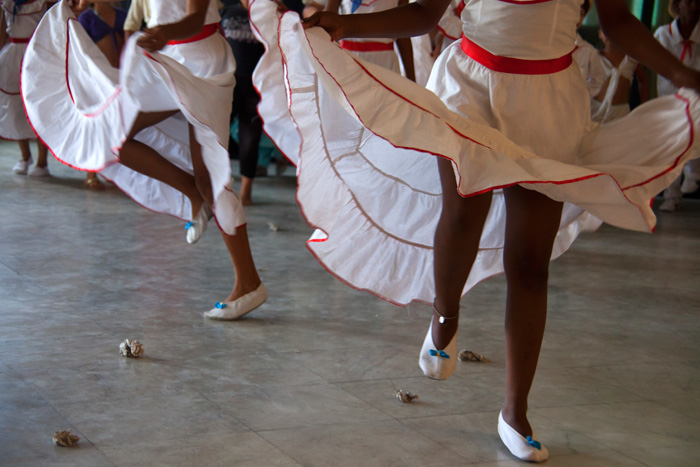 Notes on a Journey from Havana to Santiago de Cuba

One of the biggest travel stories this year has been the wave of tourists (both American and European) descending on Havana, wanting to get there before it changes. Despite the influx of travelers following President Obama’s announcements easing travel regulations for Americans, Cuba remains a magical place to visit. Being in Cuba is partly about going back in time, and even more deeply, to be in Cuba is to be in another dimension. But to really explore and appreciate this inner heart of Cuba, you need to be traveling with a team that has years of experience and the right connections.

GeoEx has been blazing travel paths in Cuba since 2000 and around the world for the past 34 years. In the spirit of these traditions, I recently explored Cuba with the goal of getting far beyond Havana. My team and I ended up having one of the most epic road trips of our lives. Here are 11 truths we learned along the way.

1. While the wave of American tourists has arrived, it’s still possible to get away from the crowds and off the beaten path

The Old City of Havana is crawling with American tourists, but using our local connections, we were still able to get away from the crowds at little-visited paladares (privately owned restaurants) and clubs. And the farther away from Havana we got, the fewer Americans we saw, until finally, we didn’t see any at all. In fact, when we were standing in a picturesque plaza in one of Cuba’s historic towns well off the beaten path, a local approached me and said, incredulity in his voice, “I’ve heard that there are now busloads of Americans in Havana. Is this true?”

A world away from the buffets and austere, enclosed resorts, in the middle of the island, we felt like pioneers, a new generation of GeoEx explorers.

One could argue that now is a more exciting time than ever to visit Cuba, given the improving infrastructure, countless paladares, and restoration work that is slowly transforming some of the historic quarters. At the same time, the Cuban state keeps a tight handle on what businesses can exist, so you won’t be seeing a Starbucks and McDonalds on every corner any time soon. The revolution is deeply intentional about maintaining culture, and keeping the soul of the nation preserved is a core value that will not be discarded. 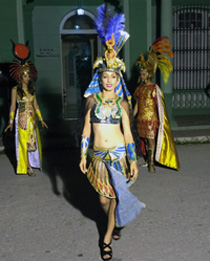 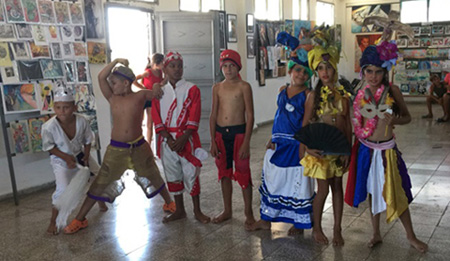 Yes, countless tourists are aimlessly wandering around Havana’s Old City streets and ogling Cuba’s famous classic cars. But contrary to popular belief, Cuba remains a difficult country to travel to and through on one’s own: To get into the inside track, you need a fixer.

With the lowest per capita number of e-mail addresses in the world, Cuba is a place where everyday life functions differently from the rest of the world. Getting things done requires having the best team in place, personal relationships, confirmation phone calls (countless ones, in fact), an intimate understanding of the “Cuban way” that things work, a special kind of finesse, and infinite patience.

On our journey we heard countless horror stories of independent tourists whose travel plans had been majorly derailed: a group of friends who had made car reservations online, only to show up and find there was no such car (or any car, for that matter) available for the entire duration of their trip; couples who had booked accommodations, only to find out when they arrived that they had been placed in far inferior apartments; other travelers whose hotel reservations had disappeared entirely. We watched tourists scratch their heads at the airport in Santiago when all the flights for the entire day were canceled and there was no official airline representative to be found.

With the support of our Cuban team (and a good sense of humor), we were always well taken care of, with options A, B, C, and even D, E, and F readily on hand. 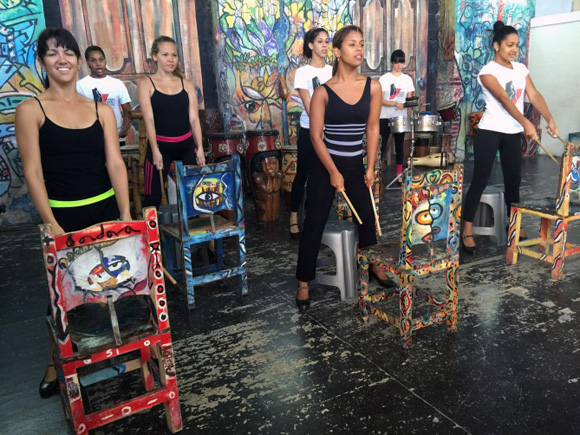 4. It’s impossible to tell what is on the inside of a building by looking at the outside

The dilapidated look of the buildings in Cuba is a result of state ownership. This means that you can never tell a building’s interior condition from the outside. (In fact, some of them are starting to be elegantly restored inside.)

Since there is little to no signage in Cuba (advertising is forbidden), it’s also impossible to know what’s inside. Our well-networked Cuban team ushered us into private rehearsals in nondescript buildings with some of the nation’s top companies, such as the National Ballet and the National Folkloric Troop. We also met with some of the country’s most renowned artists in their unmarked private galleries. And we were joined for dinner by foreign correspondents and journalists, economists, authors, and others—each of whom gave us their unique and unabashed perspectives. 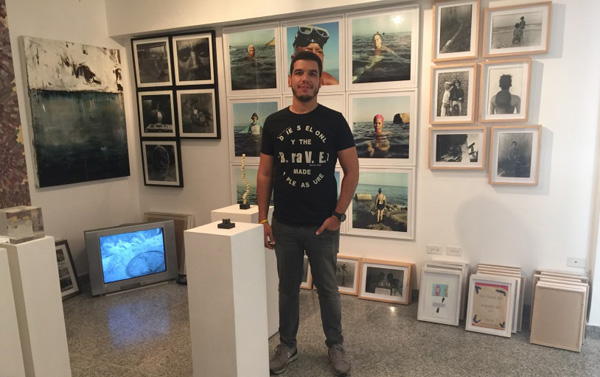 5. Speaking a little Cuban slang while wearing a funny costume can go a long way

We loved trying out our newly learned Cuban slang, such as “Acere, que bola” (“What’s up, my brother?”). It made our new Cuban friends giggle and broke the ice. It even helped me score the exit row on my return flight. This tactic worked especially well when accompanied with a pair of crazy glasses. This made the Cubans die of laughter. Everyone wanted to try them on. 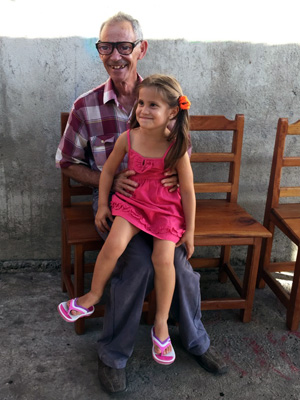 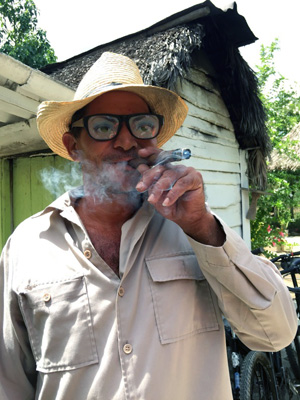 6. Not having access to the Internet is a great way to be in the moment and expand your mind

Though the Internet is slowly beginning to come online in Cuba, we realized a few days into our journey that in most towns, it still doesn’t work well, if at all.  At one point, we got so desperate that we bought Internet time from two teenagers who had hacked the new state-run Wi-Fi router in the park, but even that didn’t get us online.

After countless failed attempts, our 29-year-old Cuban driver turned to us and proclaimed, “The biggest difference between Cubans and Americans is that Americans are always thinking about their e-mail.”

After reflecting on that truth, I gave up—and within 48 hours, I was feeling more present and free than I have in years. There was space in my brain for creative thought. I wrote a poem, something I’ve never even dreamed of doing in my digital-centric life.

I began to cherish the specialness of each day, activity, and encounter, mindful that these historic moments in Cuba are fleeting. 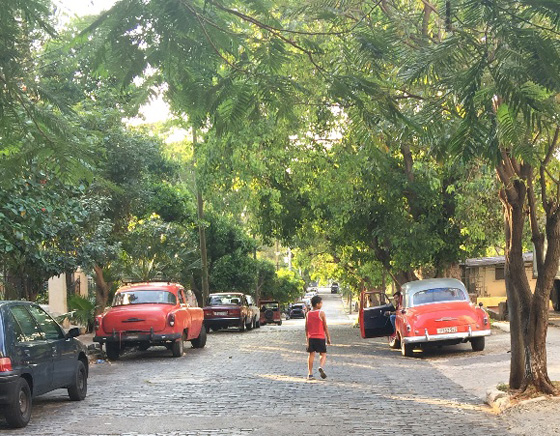 7. The bicycle driver’s taxis are using all of the country’s bathmats!

As we traveled outside of Havana and into the provinces, we began to notice that none of the hotels or private homes had any bathmats. As it turns out, these coveted items are being used by bicycle taxi drivers as seat cushions. With very limited resources, Cubans are remarkably resourceful. Bicycle taxis are a great example of the kind of repurposing of materials you will find all over the country. Drivers use pool umbrellas for shade and CDs as reflectors. 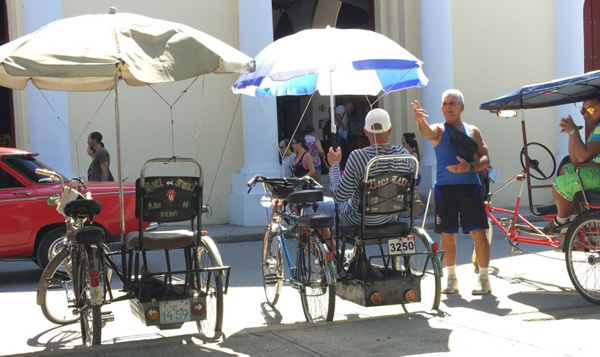 Bicycle taxis line up in Holguin for a provincial parade

8. Parrandas are the equivalent of Cuba’s Carnival

Each province has its own parranda, Cuba’s unique form of Carnival. The most famous happens each year in a small provincial town called Remedios. Each parranda has two teams, which work day and night in secret once the year’s theme has been released. The team’s floats feature light bulbs that are collected door by door by team members who fan out across their regions. The head of the losing team is thrown a fake funeral, which the entire town attends.

Roaidi, the town’s official mayor—he’s head of the bicycle taxi club, the classic car club, the parrandas, and city historian—showed us photographs of Remedios and its famous parrandas from the past 100 years. We even got to go to the warehouse to see the incredible floats in progress. 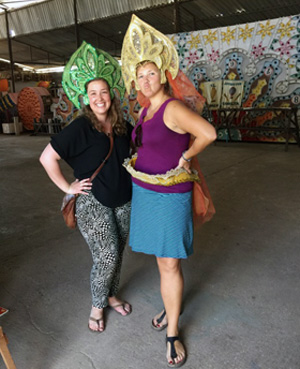 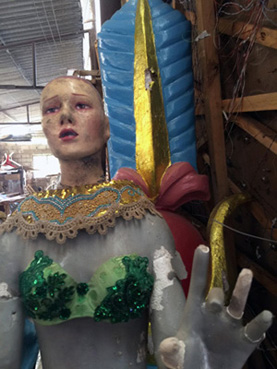 9. Cuba really does have some of the world’s best white-powder beaches and crystal-clear water

Cuba is an archipelago of more than 4,000 islands filled with intact coral reefs ripe for exploration, white-sand beaches, and turquoise waters. We met with local scientists and conservationists in Cayo Coco, and even snorkeled around the island site of former Cuban President Batista’s old vacation home. We finished the day watching the sunset at Playa Prohibido, a funky throwback of a bar covered in foreign license plates. 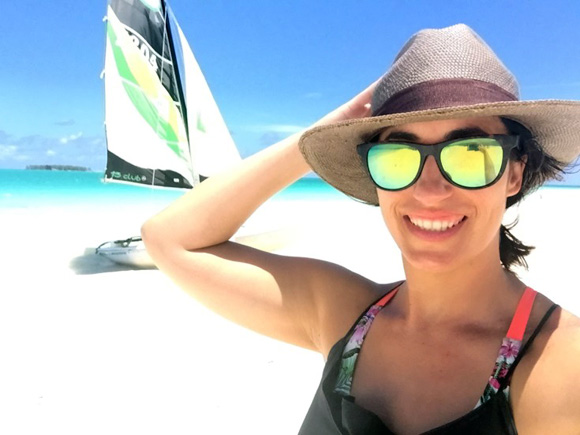 10. Even Cuba’s smallest towns have world-class musicians and dancers

In each town we met with the heads of UNIAC, the Union of Writers and Artists. We were able to arrange for private performances and conversations with highly trained musicians, dancers, and artists at each UNIAC center. In Caibarien, we even got a private tour of the Casa de Tradiciones to see the handmade and elaborate costumes of the Parrandas. We were honored with a special dance performance of youth doing traditional Cuban dances such as mambo, rumba, salsa, and more, along with a spirited fashion show. 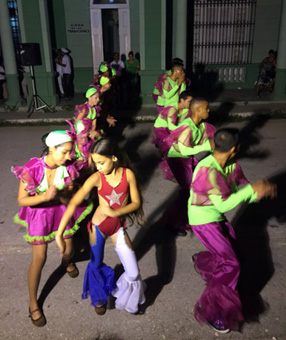 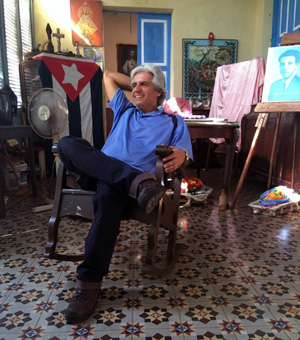 11. Some of the best moments in Cuba are the unscheduled ones

We always try to leave unscheduled time in our trips since these are often some of the most memorable moments. Sunrise is a great time to see a city waking up. iPhone-free, parents and grandparents hold children’s hands as they walk to school. During golden sunsets in Havana, the entire city comes to sit with family and friends along the Malecón. It’s one of the best places to relax with locals on what’s known as the “longest bar in the world.” 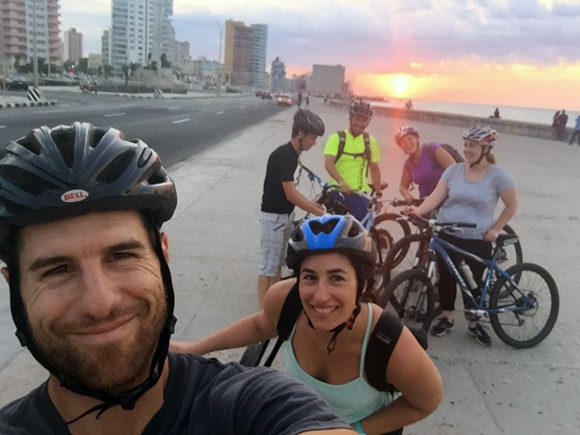 The GeoEx Cuba team biking at sunset along Havana’s Malecón

Jennine Cohen, a Managing Director at GeoEx, is a luxury and Latin America travel expert as seen in Travel + Leisure, Conde Nast Traveler, Yahoo Travel, Fortune, Forbes, and more. Learn more about all of GeoEx’s trips to Cuba or contact Jennine at 888-570-7108. She looks forward to sharing the best of Cuba with you.