Trip leaders have a tremendous impact on the quality of your in-country experience, which is why we spend so much time vetting ours. We insist that you travel with the best on your GeoEx Safari. Through our longtime friendships and working relationships throughout Africa, our travelers get a chance to see things that other travel companies simply cannot. For GeoEx Safaris:

We’d like you to meet some of our superb safari guides: 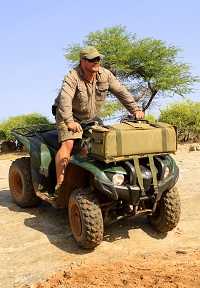 Brad Hansen
An explorer from a young age, South Africa-born Brad Hansen spent his youth in the wild. After studying agriculture, his sense of adventure led him to the conservation-minded Field Guides Association of Southern Africa and a decade-long career in guiding and tracking. He has since guided across the continent, from South Africa, Botswana, Namibia, Zimbabwe, and Zambia to Chad, Kenya, Tanzania, Ethiopia, and Malawi to Rwanda, Uganda, the Republic of the Congo, and the Democratic Republic of the Congo. Brad’s experience has awarded him work on such stunning expeditions as a trek to the Great Rift Valley, which covered the geographic trench from start to finish, and the world’s first circumnavigation of Africa by Land Rover, a voyage that covered 34,000 miles. Beyond his skill as a guide, he is an accomplished photographer and has a keen interest in anthropology and sports.

It is Brad’s great pleasure to share with guests the Africa that he so treasures: “the scenery and sounds, the pungent smell of a campfire and the sweet smell of grass, the anticipation and adrenaline of game viewing, and the sun, moon, and stars above.”

“Brad is an outstanding guide. Our trip was seamless because of him. Throughout our trip, the best interests of my family were Brad’s top priority. Thank you for spoiling us with Brad as our guide.” –Katherine F. 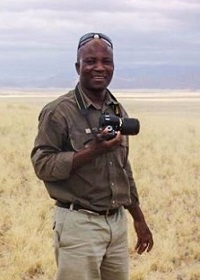 Jeremia Mwapopi
Trip leader for Namibia: Red Dunes, Rhinos & Desert Riches, Jeremia was born in the far northern reaches of Namibia, known as Owambo land. His daily chores were herding cattle and cultivating millet crops, but during school holidays he would visit his father who worked at the Ministry of Environment and Tourism in Etosha National Park.

After completing his schooling, Jeremia was introduced to Dr. Peter Morkel, the renowned rhino veterinarian, and his interest in nature was affirmed. Jeremia started working as a veterinary assistant to Dr. Morkel and then continued as an assistant and game capture supervisor in South Africa, Botswana, and Namibia. In 2000, Jeremia did hotel management training and became a guide.

To deepen his guiding expertise, he continues his studies in tourism and hospitality on a part-time basis. Jeremia calls nature his home, conservation his pillow, trees his office, and wildlife his media.

“Jeremia was an outstanding guide! He knew so much about everything—Namibia, animals, plants, reptiles, scat…all of it! Jeremia also had a great sense of humor. If I were to return to Namibia, I would want no other guide.” –Jennifer C. 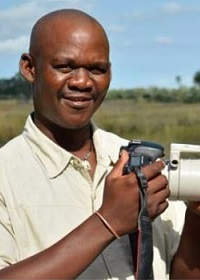 Ollie Porote
Olebogile, known to all as Ollie, was born and raised in Maun, Botswana. He comes from a long line of subsistence farmers, and his appreciation for nature and wildlife dates back to his boyhood days of herding goats and cattle.

After finishing school, Ollie completed his national service in the Department of Customary Law and then enrolled in a professional guiding course at the Botswana Wildlife Training Institute. He has been guiding ever since 2001. Ollie specializes in walking safaris and working with special-interest groups. He guides primarily at DumaTau Camp in the Linyanti, and is one of the most senior local guides. His hobbies include photography and fishing.

“Ollie was fantastic with his knowledge of the wilderness (especially elephants), his patience for the bush, and when he reached botswana, he exploded with light and levity. ” –Louis A. 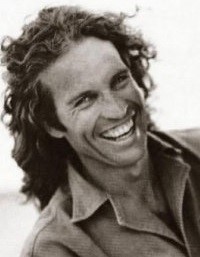 Ralph Bousfield
Beloved leader of our Botswana Family Safari among other trips, Ralph comes from a long line of African pioneers and adventurers. His family has guided safaris for four generations, starting with his maternal great grandfather, Major Richard Granville Nicholson, who escorted Princess Eugenie to see her son’s grave and the site where he was killed in the Anglo-Zulu War of 1879. Ralph’s father, Jack, grew up hunting crocodiles in Tanganyika with his father, and was one of the first Great White Hunters to turn his back on hunting become a conservationist.

Ralph studied nature conservation, writing his thesis on the wattled crane as an indicator species of wetland destruction. He furthered his studies at the International Crane Institute in Wisconsin under Dr. George Archibald, who captive-bred the whooping crane back from extinction.

Ralph then worked with his mother to establish Botswana’s first wildlife orphanage and education center and also built Jack’s Camp in memory of his father, who died in 1992. In 1998 Ralph co-produced and presented a 16-part series for the Discovery Channel entitled “Uncharted Africa”, which was filmed in Botswana, Namibia, Kenya, and Tanzania. He is considered an expert on the Makgadikgadi Salt Pans, the Kalahari, and the Bushmen.

“Ralph is a gem!” –GeoEx guest 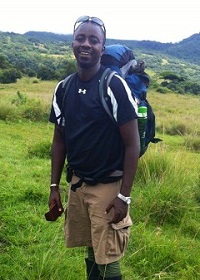 Arnold Swai
Arnold Swai was born in Tanzania and grew up among the birds, primates, and small forest antelopes near Mount Meru and Mount Kilimanjaro. With such ecological diversity around him, Arnold developed a passion for nature at an early age. Arnold later pursued his education in other parts of Tanzania and Kenya before graduating with a degree in wildlife management. Since then, he has spent more than 10 years exploring the habitats of East Africa, both on foot and by vehicle. In addition to being intimately familiar with the flora and fauna, Arnold has a broad understanding of African cultures and history. Anything flying, walking, crawling, or flowering makes him enthusiastic. Still, his fondest memories come after the sun has set, when he sits by the fire talking about Africa and soaking up its beautiful night sky.

“I was very impressed with Arnold. He’s a first-class guide!” –Maria H. 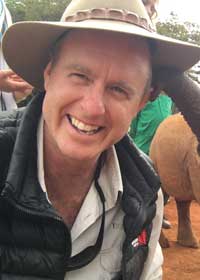 Lee Fuller
The call of the wild began early for Lee. Growing up on his parents’ farm in the Midlands of KwaZulu Natal, South Africa, he spent his spare time exploring the bush, usually with fishing rod, rifle, or camera in hand. After schooling at Martizburg College, he studied forestry at Saasveld, a college in the Southern Cape. After a brief stint in the forestry industry, he headed back to the bush in 2000. Joining Singita in the Sabi Sands, he cut his guiding teeth amid some of the best leopard viewing in Africa. Rekindling his interest in photography, he worked at various Singita properties and honed his bush skills there, especially on foot. An opportunity to head to the remote wilds of Tanzania in the beginning of 2005 was too good to resist, and he became the head guide at Grumeti Reserves.

There are few wildlife hot spots in southern and East Africa that Lee has not explored. Adventure highlights for him have included gorilla and chimp trekking in Uganda, photographing in the Okavango Delta of Botswana, canoeing down the Zambezi in Zimbabwe, exploring the untouched wildernesses of Zambia, and scaling three of the highest peaks in East Africa, culminating in a Kilimanjaro summit in 2006. Lee’s infectious enthusiasm for Africa’s wild places, along with his passion for sharing intimate local knowledge, make him the perfect guide to the riches of Africa.

Richard Avilino
Richard was born and raised in the dusty town of Maun, Botswana, the gateway to the world-renowned Okavango Delta. As a child he watched the hippos, crocodiles, birds and bushbuck that gathered along the banks of the Thamalakane River. His uncle worked in one of the Okavango Delta camps, which led Richard to fall in love with nature and pursue a career in wildlife.

Richard did his guide training at the Botswana Wildlife Training Institute and obtained his professional guide license in 1998. He subsequently realized that he had an interest in languages and in 2002 he headed to Düsseldorf to study German. Today he is fluent in English, Setswana and German. An avid birder, he obtained an Advanced Birding certificate from South African Birdlife in 2003. Aside from birding, Richard is extremely knowledgeable in the fields of animal behavior, botany, ecology, history, geology, tracking and photography. He also enjoys including walking in his safaris and sees this as an opportunity to make his guests feel part of the African wilderness.

Travel is different now.
JOIN OUR LIST
Get the latest intel, insight, and inspiration from GeoEx delivered to your inbox.