Home » Wanderlust » What is Saudi Arabia Like? Our Tour Group Finds Out Firsthand

What is Saudi Arabia Like? Our Tour Group Finds Out Firsthand

Saudi Arabia is a destination so far off the typical traveler radar that locals are often surprised to see a Western tourist pass by. It is one of the most difficult countries for foreigners to access, but recently the kingdom has been opening to tourism. GeoEx was thrilled to take its first travelers there this past fall. To find out about their trip to Saudi Arabia, we sat down with the trip’s leader, Middle East expert and Syrian native Bisher Alissa.

The trip sold out quickly. Why do you think Americans are interested in going to Saudi Arabia?

Saudi Arabia has long played a significant role in the stability of the global economy, but it is one of the world’s best-kept secrets, a difficult spot for non-Muslim travelers to experience firsthand. The cradle of Islam, the kingdom has always followed religious and tribal tradition, and elders have been highly influential. Now we see an urge for change and openness. There are young leaders, a growing role for women, and a big vision that’s already led to social change and an openness to investment, the building of megacities, and the development of tourism. So, there’s a great deal for travelers to be curious about.

What areas of Saudi Arabia did you visit, and how were you received by the Saudi people

Our group of 12 travelers, all Americans and mostly women, covered the major regions of the country—the Hejaz area, the Asir region, Nejd, and the north, a geography larger than Western Europe! We were well received everywhere, from the cities to small towns. Saudis are open and many speak English very well, which allowed for easy communication. They wanted to know where we were from, the places we were visiting, and what we thought of their country. While many Saudis are well traveled in the West, most hadn’t been to the stops on our itinerary. In some places, hotel staff asked us to take group pictures because they are not used to seeing tour groups in Saudi Arabia!

Were any local encounters with the Saudis especially memorable?

Many of them were. For instance, while visiting a traditional mud-brick village in Abha that’s now abandoned, we met an old man who was so excited to show us his former family home—a typical Assyrie house, made of mud-brick and three stories high—that he took us through every nook and cranny, telling us about his life there, how things have changed, and his hope that one day there would be enough funds to restore the old house and show it properly to visitors.

The same thing happened in Ushaiger. We were lucky to be there on a Friday when locals return to visit their old village. While we were walking through the traditional village, we met a man who had recently restored his house and opened it to visitors. He welcomed us warmly with dates and coffee. He was happy to answer questions about his life and discuss not only his relationship to the past but how things are changing. These were great chances to interact.

What were the challenges of traveling to a new tourist destination? And what were the rewards?

Tourism is very new. The idea is there, the plan is set, sites have been cleaned, polished, and heavily restored—but there isn’t yet a clear plan in place to manage and coordinate all the elements that make a successful trip. For instance, some sites are affiliated with the Royal Tourism Authority, while others are affiliated with the Saudi Commission for Tourism and Archaeology, so sometimes sites weren’t open even when they were supposed to be.

On the other hand, you get to see up close one of the world’s best-kept secrets. You have a chance to learn about people’s aspirations for change and how the current changes are affecting their lives, which have basically been the same for decades.

What were the highlights this unique travel experience?

Visiting the camel market and meeting with the vendors and herders was fascinating. Saudis are camel breeders and for some Saudi families, it’s a status symbol to raise and keep camels. Camels are kept for a few reasons: racing, wool, and meat. The camel is also a symbol of Saudi tradition; camels allowed them to access the outside world. So the camel market is a popular outing for locals as well.

At another point, members of a women’s weaving collective spontaneously invited the women in our group for a private chat, which gave them special insight into the local women’s social and work lives.

The rock art we viewed, ranging from the 3rd millennium BC through the post-Classical period, was also spectacular.

There’s a certain level of bureaucracy, even with any prearrangement, which makes Saudi Arabia different from many destinations. You meet with it almost every day, in the form of unexpected site closures, dress codes, the impact of prayer times, and last-minute confirmations. That was a bit of a surprise.

But mostly we were all surprised by the continual generosity of the Saudis, and by how passionate they were to teach us their traditions, show us their homes, and talk with us whenever possible. For example, we were in a local market in Anizeh on the last Friday of the month, which happened to be when they have their monthly auction. This is for the locals; it’s not touristy at all. A couple of our group members participated in the auction and bought some antique items. In the end, when we went to pay, the management refused to accept any money! They insisted that we take the items as gifts. This was an incredibly nice gesture.

What was your biggest takeaway from the journey to Saudi Arabia?

One big takeaway was that the Saudis are sincere and generous people, eager to share their traditions, as well as things you may not expect—like the lively art scenes in Jeddah, Abha, and Riyadh. Another major takeaway was that the country is an atypical travel destination; it’s a huge land with amazingly different landscapes and local cultures and has great potential for tourism.

You’re leading additional trips to Saudi Arabia this year. Will you do anything differently?

We’ve made some tweaks to the itinerary to craft themes in each place we visit and smooth out some of the logistics. We will keep working with the local staff to share knowledge and exchange best practices.

Any advice for travelers thinking about going to Saudi Arabia?

First, travelers should arrive with the knowledge that Saudis are proud people and can be sensitive to how their country is perceived, so we are always mindful to work out how to address delicate questions.

Second, our journey covers a lot of territory, so travelers should be prepared for long drives. We make them fun, with snacks, lively conversations, and question-and-answer sessions.

Finally, tourism is very new here, so things don’t always go as planned and you have to be flexible. This is a worthwhile trade-off, though, when you’re getting up close with ancient and modern riches that have been kept under wraps. 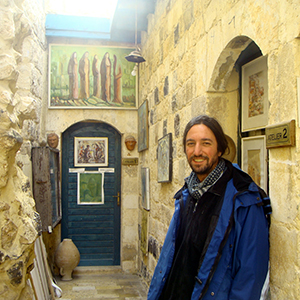 To learn more about travel in Saudi Arabia, including dates for our next Saudi Arabia group trip, give us a call at 888-570-7108.