A Peek into Everyday Life in Yogyakarta | Indonesia Travel Blog

Home » Wanderlust » A Peek into Everyday Life in Yogyakarta

A Peek into Everyday Life in Yogyakarta

This is my first time in Indonesia, my first time in Asia. The cultural differences are stark, but somehow it doesn’t feel so unknown. I’m on the island of Java in Yogyakarta, often called the cultural and spiritual capital of the country. The warm, humid air and overcast skies remind me of past visits to Central America and New Orleans. The bustling noise and movement of the city—with a population of around 400,000—are not as jarring as one might imagine. The bright but gray clouds occasionally release quick, intense downpours, drenching the dozens of people on motorbikes weaving through the slick streets; they quickly pull on plastic ponchos or pause under awnings until the water dumping from the sky relents. Even the rain isn’t off-putting in this fascinating place.

Today I set out to see everyday life in the old neighborhood of Kotagede, home to about 10,000 residents and once the capital of the Sultanate of Mataram (the last major independent Javanese kingdom before the island was colonized by the Dutch). The van taking me to Kotagede turns off the congested main road and parks in a dirt driveway under a rambutan tree, its bristly, red fruit bursting into ripeness this time of year. A young, enthusiastic man by the name of Dimas, very tall and stout by Indonesian standards (at one point in our journey together, he describes himself as a “glutton”), greets me, pushing glasses up the bridge of his nose as he smiles. We board bicycle-powered tuk-tuks, Dimas and I each in our own bouncing buggy. The bicycles are pedaled by two middle-aged men in flip flops, their skin leathery from a lifetime under the equatorial sun, their smiles warm and inviting. 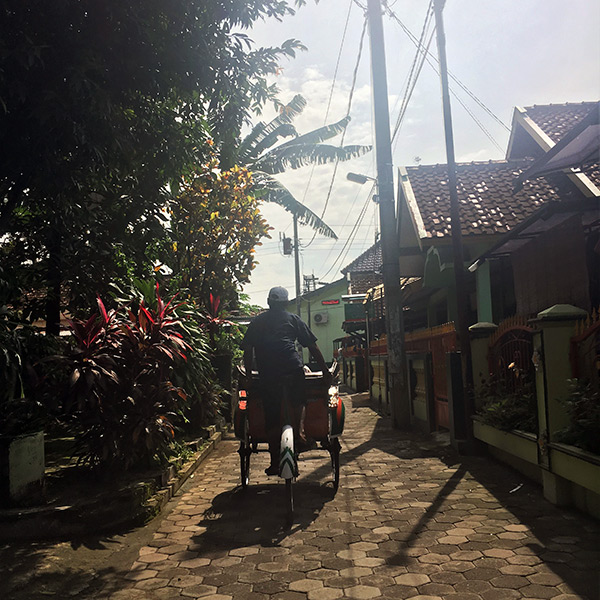 Our first stop is a famous bakery, Kembang Waru, where an elderly man and his wife make cookies resembling giant madeleines, the famous French confection. We are greeted by the shop’s owner as Dimas explains the significance of this particular bakery and its French-colonization-inspired cookies. The owner and I share a language barrier, so he smiles broadly and points emphatically to a framed newspaper clipping declaring his bakery the best in Java, then points back to himself to indicate he is in fact the person pictured in the article’s photo. We walk around to the kitchen in the back of the tiny bakery, where the owner’s wife is seated in front of a blazing hot oven mixing batter for the next round of buttery cookies to be poured into cast iron molds. It’s hard to imagine how this little old couple could sit in this hot kitchen in front of a fiery oven, day in and out, in Indonesia’s intense heat and humidity. The owner says baking makes them happy, so they do it. 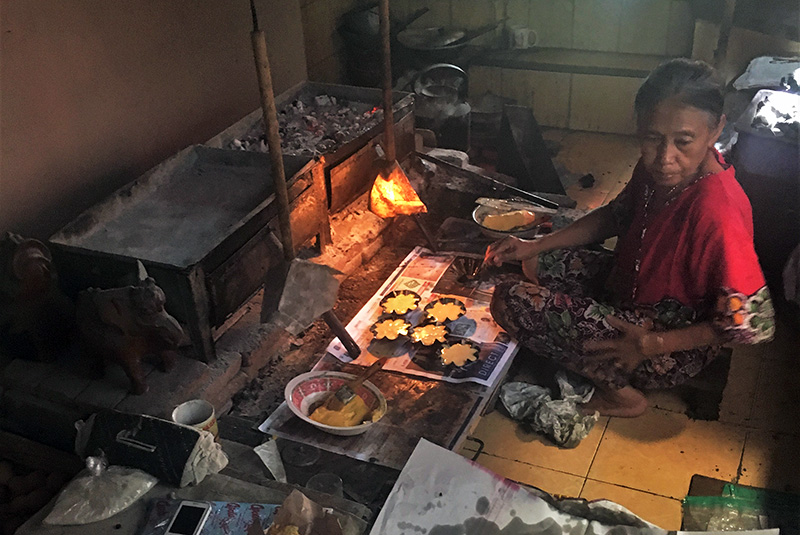 We pile back into the tuk-tuk buggies, the driver chuckling at me for the second time as I fumble into the seat. Dimas and I hop out again in front of a large white building. We duck inside to find a huge, bustling daily market. The heat is amplified in the crowded space, and my eyes struggle to adjust in the dim light. Intense aromas weigh down the warm air, and every product imaginable is laid out on tables in front of eager sellers, chatting or bartering with their customers. We see clothing, mops, spices, sweets, healing tinctures, pots and pans, fresh produce—everything one could want in Kotagede. Some items like baskets and plant pots are stacked nearly to the ceiling, creating winding aisles among the goods for sale. 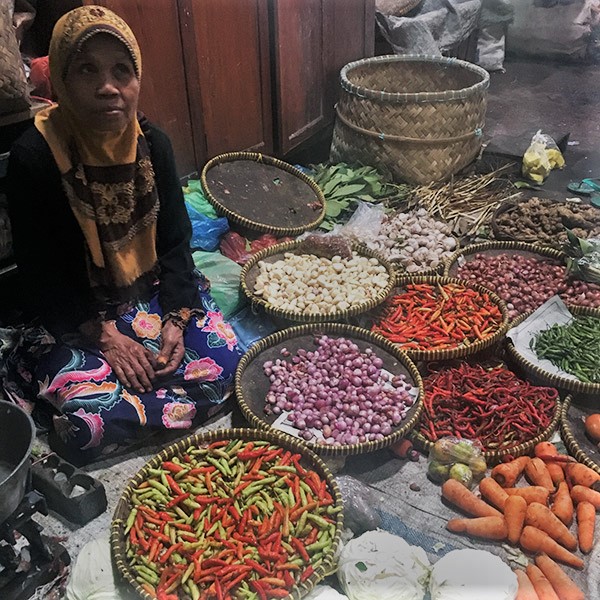 Dimas stops to buy a tonic called jamu in a small, shallow cup. He thrusts it towards my face, smiling expectantly. The liquid is milky and bright yellow, smelling of earth and ginger. I take small sips of the pungent drink; it’s tannic, slightly spicy, but cool and refreshing, with a strong, turmeric-laced finish. Dimas explains that jamu is Indonesia’s cure-all elixir—containing mostly turmeric, ginger, and tamarind, among other herbs and remedies—that aids everything from colds to rashes to fertility troubles. We move on to a diminutive older woman sitting quietly on rugs near heaping baskets of colorful peppers and chilies, shallots, garlic, cabbage, carrots, and ginger. As politely as I can, I ask Dimas if I may take a photo of the woman with her vibrant vegetables. Once he translates, she smiles and agrees, though we are advised to buy something in exchange. Dimas pays for a handful of garlic bulbs and ginger roots, we say thank you—“Terima kasih”—then emerge from the market, blinking into the bright gray skies.

Our final stop is the Royal Cemetery, Hasta Kitha Ageng, within one of the oldest mosques in Yogyakarta, built in 1575. All who enter the cemetery must don traditional clothing, so Dimas and I split off to the men and women’s respective changing areas. A woman knocks lightly on the changing room door, then wordlessly swaddles my torso in a beautifully patterned cloth, tying it in some magical knot that holds it together across my chest. She then wraps a longer, equally lovely cloth around my waist, covering the pants I’m wearing, and hustles out of the room. 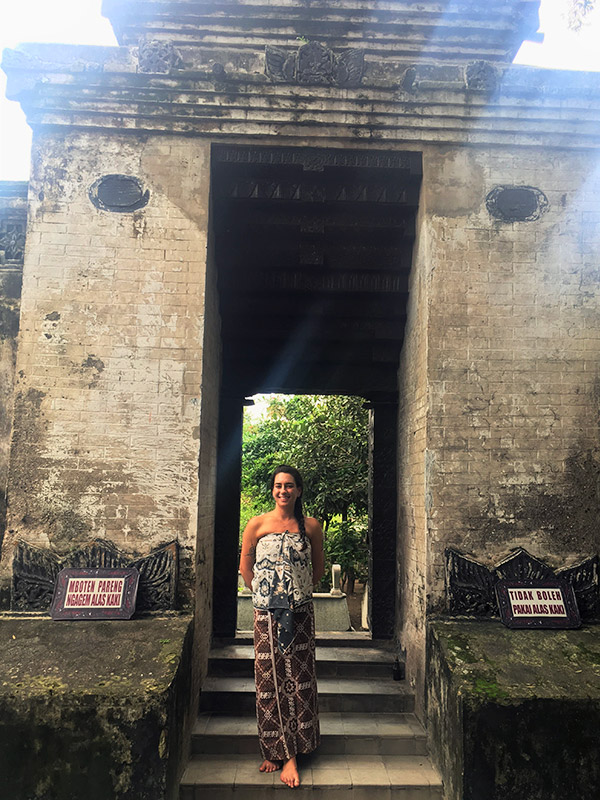 Dimas and I, now properly attired, pass through the impressive stone entrance archway leading to the cemetery. Lush green plants and small flowering shrubs grow everywhere between the moss-covered gravestones, most with illegible engravings—time and weather having all but erased the lettering. We enter the cemetery’s mausoleum, where several older men are sitting, talking softly, and attending to the incense and offerings on the steps outside. We weave through the huge marble coffins, some nearly stacked on top of each other, the air thick with incense and the light very dim. There’s a group sitting cross-legged in rows in front of a particular tomb, with their heads bowed, led by a man praying at the front. Dimas tells me the remains of the first King of Mataram and his family lie here, and the groups within the mausoleum are praying to specific, important figures also buried inside. The marbled floor is smooth and cool under my bare feet.

Back at the rambutan tree, I bid goodbye to my new friends Dimas (he cheerfully insists on a selfie together before I depart) and the tuk-tuk drivers. I thank them all emphatically, sincerely grateful for this peek into Kotagede, such a historic part of Yogyakarta. I have a better understanding of day-to-day life here—the buildings, the roads, the homes, the people. And I understand how that life differs from my own—how it is desirably slower, more steeped in tradition and religion, and permeated by spirituality and the legacy of so many cultures and colonizers past. 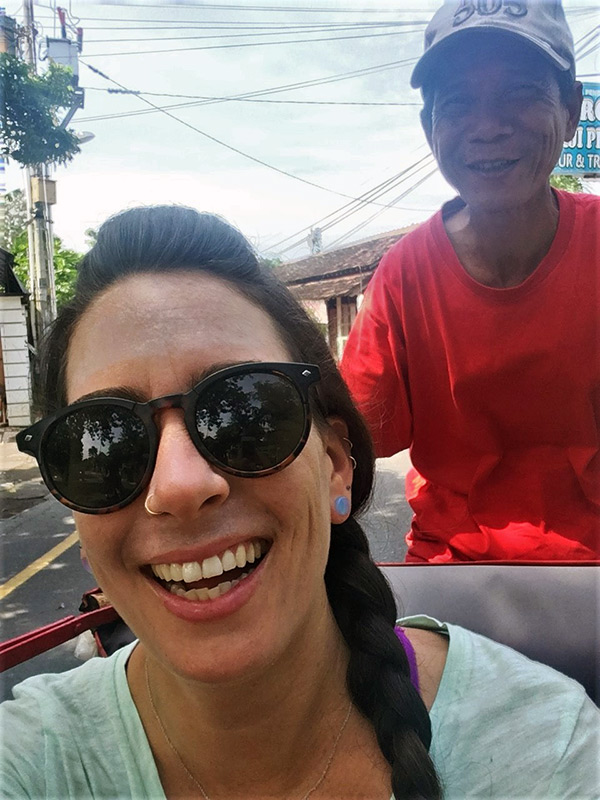 More Indonesian adventures await beyond this storied city, and the winding, narrow streets of captivating Kotagede.

To find out what is possible for private journeys in Indonesia, give GeoEx’s travel specialists a call at 800-777-8183.