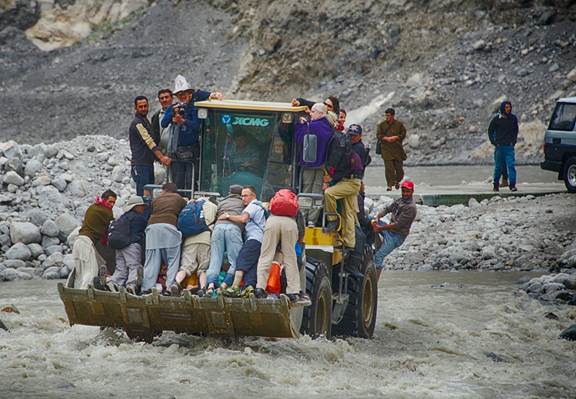 Our journey into Pakistan began with a bang. We crossed the official border with China at Sost and were heading to Gulmit to spend the night. The day was gray; the massive canyon was a spectrum of gray and brown hues with drifts of scree on the slopes, occasional oases of green, and in the far, far distance, for the eagle-eyed, a herd of ibex. Even the Hunza River was brown with the silt of snow melt.

In spite of the somber colors, we found ourselves elated by the stark, brooding quality of the scene and the majesty of the landscape. Perhaps, too, the realization that we were insignificant next to an immense cliff face offered an unexpected respite, a reminder to keep perspective and respect proportion. We reached the town of Passu and kept driving until we came to a wide swath of river that, our guides informed us, tends to break free every spring and take out the road. As the photo above indicates, that was definitely the situation when we arrived!

Never was a misadventure so gleefully embraced. There was much scurrying to and fro as the situation was assessed, then, as our guides closely directed our progress, we skipped from rock to rock, gingerly avoiding the literally glacially cold water. The culmination was the fantastic decision to hitch a ride on a serendipitously passing tractor.  Less than one day into our passage to Pakistan, we already had spectacular vistas, a new philosophical perspective, and a victory over a roiling river. Just one day and we had stories that would be worthy of recalling and retelling over many years.

To find out more about travel in Pakistan and beyond, call GeoEx’s travel specialists at 888-570-7108.