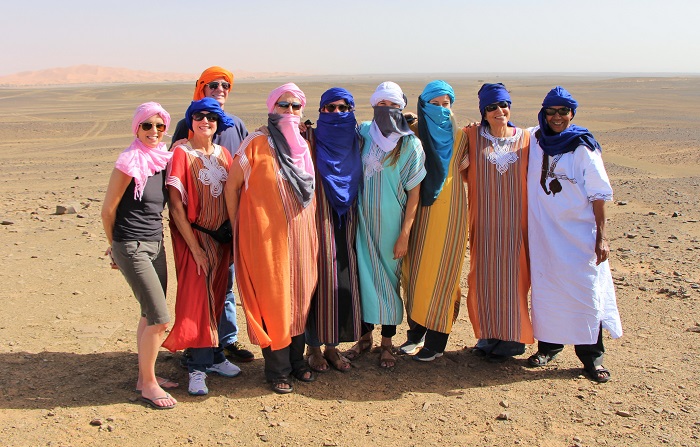 As long as I can remember, I’ve always been fascinated by Morocco. To me, Morocco meant the contrasting images of bustling souks filled to capacity and barren desert landscapes dotted with camels and palm trees. My interest in Morocco has had highs and lows; it was always on my travel list, but never my I-have-to-go-there-now destination. Until recently, when I finally made the journey. If I’d known it was going to be even half as amazing as it was, I would have gone long ago—and brought all of my friends and family with me.

Throughout the three weeks I spent in Morocco, I kept wondering in awe, Is Morocco the best-kept secret in travel? Sure, everyone “knows” about Morocco. But often I hear people say that it doesn’t have the history of Europe or the adventure of a safari. What I got to see for myself firsthand is that Morocco has both history and adventure, with a wild mix of cosmopolitan cities and rural desert villages. Here’s what stands out from my trip to this North African nation.

Moroccan architecture is known for its intricate designs, but I didn’t expect to be completely blown away by them! Starting with the Hassan II Mosque in Casablanca, I was immediately pulled into the history behind the country’s architecture. This mosque is so representative of Morocco: a melting pot of cultures with Islamic, Berber, Arab, European, and Moroccan influences. 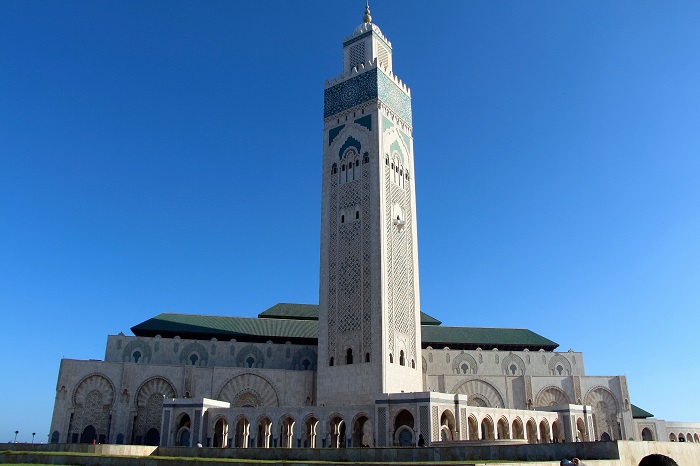 Buildings and houses in Morocco, no matter how “insignificant,” were completed with elegant and elaborate designs down to the tiniest detail. Minimalism just isn’t a concept in Morocco. It seems as though every surface is adorned with carved wood or tile; even the ceilings in bathrooms are tiled. 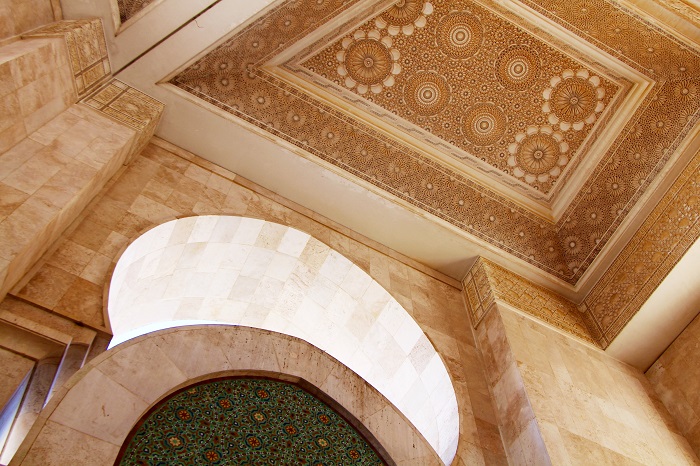 Every riad (a traditional Moroccan house with an interior courtyard or garden—totally unique to Morocco, and amazing!) we stayed at had such Moroccan character, with artistic details from hand-carved headboards to fully tiled bathrooms, and each contributed significantly to the overall trip—we didn’t only see Morocco, we were also living it!

Falling in Love with Fès

I could write a whole page on each city we visited during the trip. I loved them all! But Fès holds a special place in my heart; it’s here where I first said, “Wow. I’m really in Morocco!” because it feels like Morocco (and smells like Morocco, especially if you visit the famous Tannery Quarter). 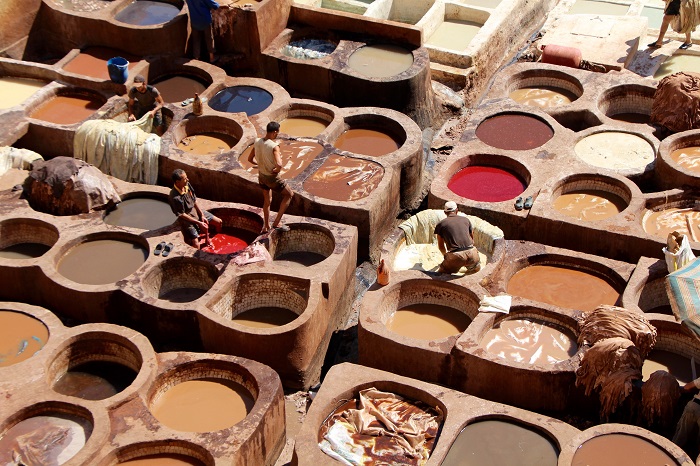 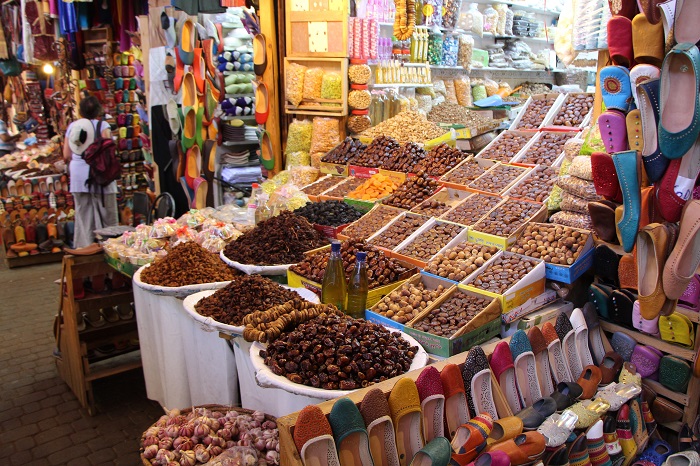 When you visit Fès’ medina, a UNESCO World Heritage Site, you’re literally walking between walls that date back to 789 AD. It is considered the biggest car-free urban area in the world, and its population tops 150,000. Wandering around the shops is fascinating, not just for the items on sale, but for the history that you can see and feel. 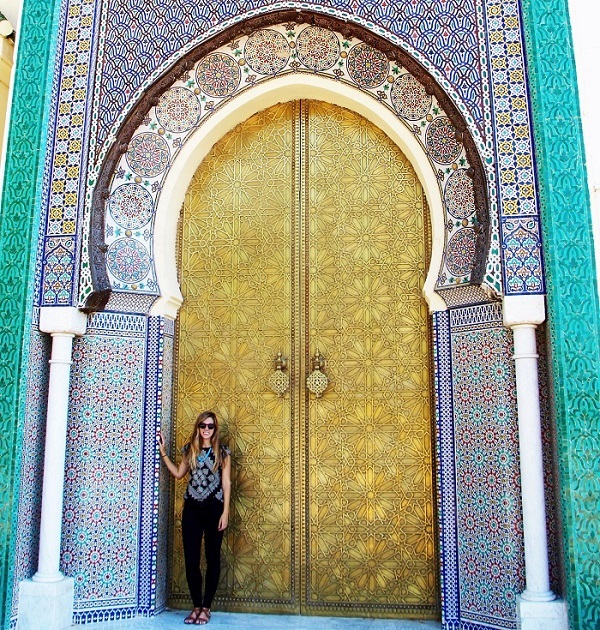 In short, I love you, Fès. Continue to never change. Unless you can maybe do something about the smell from the tannery, then only change that.

Night in the Sahara

Our night in the desert was my number-one highlight of Morocco—if I had to pick just one! (Don’t worry, I haven’t forgotten about you, tagine.) The day was spent crisscrossing the Sahara in four-by-fours to reach our camels, with a stop on the way to listen to Les Pidgeons du Sable, a popular Gnaoua band in the area. We climbed on our camels as the sun was setting, and after about 30 minutes arrived at our exclusive-use camp as the last light of the day was disappearing. 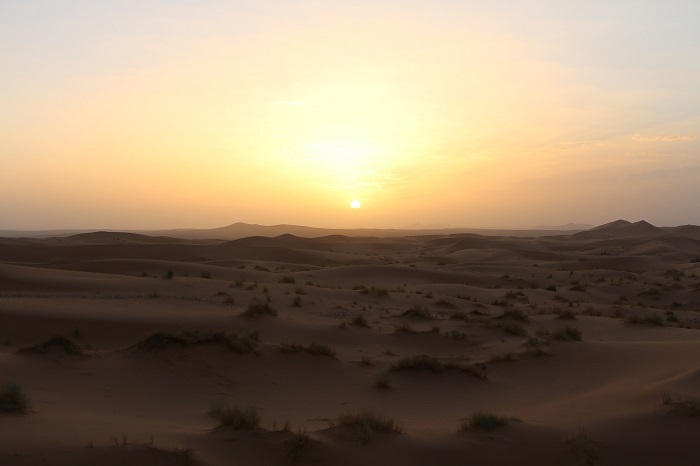 The billowing tents were stark white against the oranges and golds of the dunes, and thick Moroccan rugs were laid out as walkways connecting the tents to our large communal tent. The lavish individual “tents” were bigger than the average apartment in San Francisco, with king-size beds, night stands, coffee tables, carpets, and en-suite bathrooms complete with running warm water. With the cool nights of the Sahara, no air-conditioning was required, and that allowed us to appreciate the pure silence of the desert. 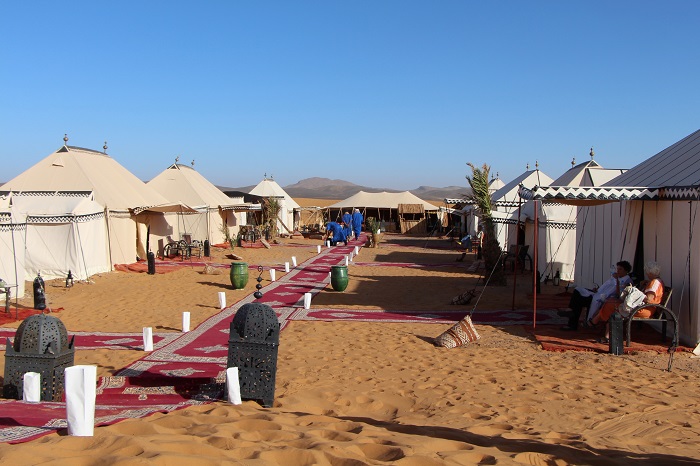 After filling up on tagine in the communal tent atop plush cushions, we spent the rest of the night lying out under the stars and listening to live Berber music. This night sky topped all the other gorgeous ones I have been lucky enough to see. Every few minutes there were shooting stars and shooting comets (a first for me). It was almost as if the sky was magnified, brightened, and enlivened with every single shimmering star.

I expected to fall in love with the famous cities of Marrakech and Fès. I didn’t expect to fall so completely in love with southern Morocco, from the cities of Skoura, Ouarzazate, and Taroudant to the places in between. 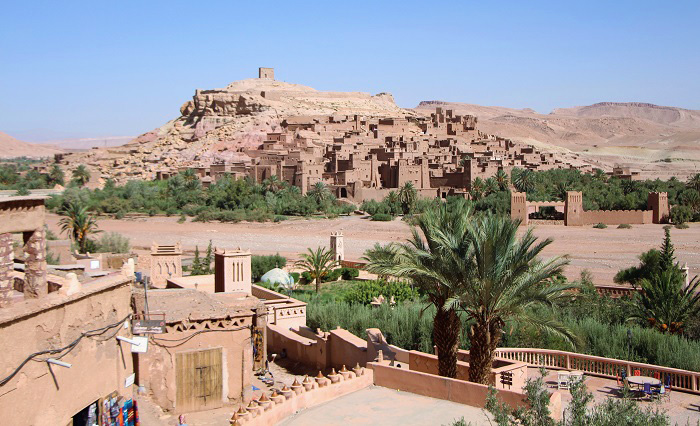 The mud-brick architecture of the casbahs contrasts with the ornate tile and wood architecture in the cities. The landscape is gorgeous: When you pass through the Atlas Mountains, it seems so dry until you inevitably come over a pass and find yourself in an oasis of palm trees. 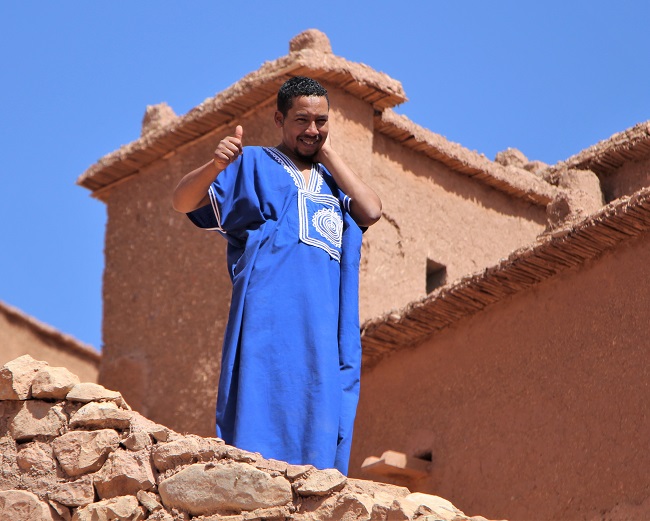 The people are warm and friendly, curious and genuinely interested in chatting and learning about other cultures. It’s an area that has seen attention over the past 20 years due to the number of movies and shows that have been filmed here, including “Game of Thrones,” “Gladiator,” and “Kingdom of Heaven.”

In my GeoEx blog post about Botswana safaris, I confessed that “I’m unabashedly a ‘safari person.'” It’s true. I love safari, so imagine my delight when I saw a diversity of wildlife in Morocco: Barbary apes (which are actually monkeys, though no one in Morocco seemed to care when I pointed that out), camels, and even goats in trees! 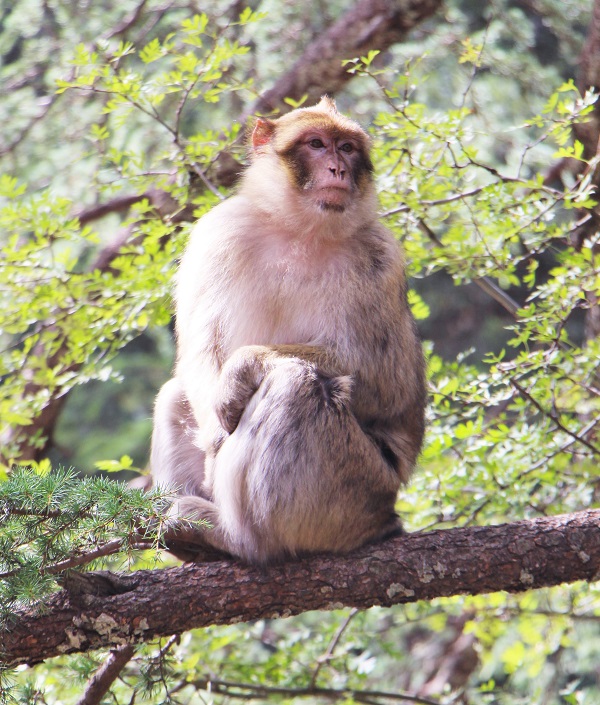 When our guide Khalid said, “Look at the monkeys!” I honestly thought he was kidding and debated not even looking up from my book. When the car pulled over, I realized he was serious. These primates are found deep in the Middle Atlas Mountains and seem out of place, running next to cars along the busy road. But this doesn’t make them any less enjoyable to watch. There were dozens of them climbing through trees, running around, uninterested in this unusual species staring at them. 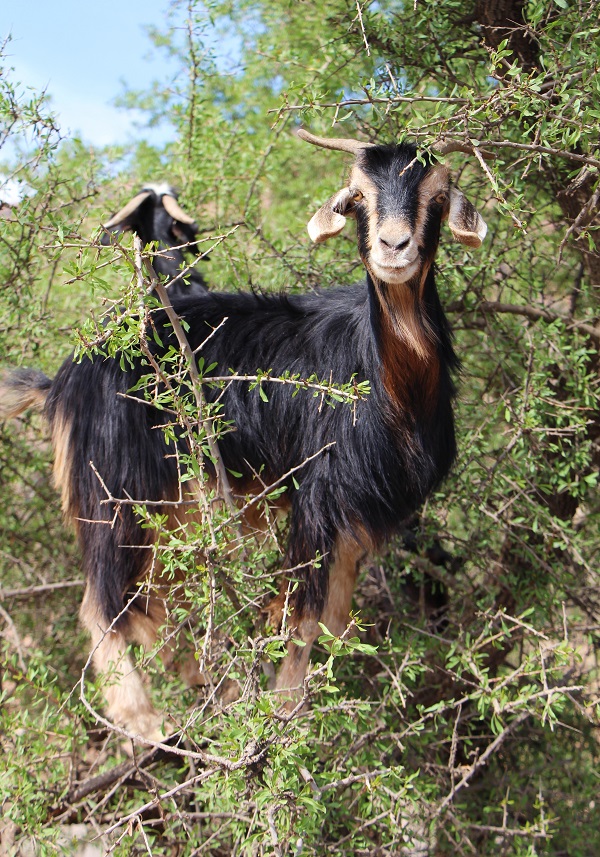 Another thing I never thought I’d see: goats in trees! In Morocco, the goats are known for climbing high into argan trees to eat fruits and leaves. I knew about these goats before going to Morocco, but could not get used to seeing goats in trees. I spent half the time photographing furiously and the other half terrified that a goat was going to fall off a branch. 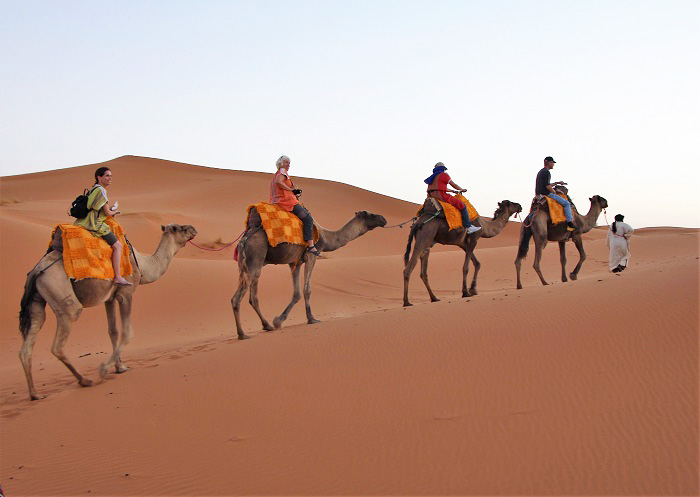 Also, camels. I’ve heard horror stories about camels (they spit! they’re mean!), so I wasn’t exactly looking forward to riding a camel in the desert. But I thought to myself, If I’m going to a ride a camel once in my life, the Sahara Desert is the place to do it. I asked our guide Khalid more than once, “These camels are nice, right!?” (I tried to have a casual, cool demeanor, but I’m sure I was red in the face with nerves.) Luckily all my panic was for nothing! The camels were nice and didn’t spit. I’m convinced the camels in the Sahara are the nicest camels in the world. All 10 of them were sweet and gentle, some a little more energetic than others. Walking through the desert was an amazing experience, and being on a camel enhanced it. An average camel is about six feet tall, giving you an extra vantage point to see across the sloping dunes. All the initial panic was worth it.

I’ve saved the best for last. I love tagine, the quintessential Moroccan dish, a stew cooked in a pot of the same name, which has a conical lid. I hadn’t had much Moroccan food before my trip, but now I can’t stop.

My favorite meals were the authentic recipes: lamb tagine with cinnamon, and chicken tagine with preserved lemons and olives. We ate at a mix of casual local eateries and high-end restaurants, but nothing beat the tagine I had next to a waterfall in the High Atlas Mountains. After we trekked up to the waterfall, a man scrambled up to us offering vegetable tagine and bread. We couldn’t say yes fast enough—hiking and doing it at a higher elevation than we’re used to (we were at about 6,000 feet above sea level) is hunger-inducing! Eating with our hands side-by-side at a plastic table, the tagine was the best of the trip. I might forget what the waterfall looked like, but I will never forget the flavor of that tagine in the High Atlas Mountains.

GeoEx’s Kim Keating has a passion for crafting unforgettable cultural and wildlife adventures in Africa and the Middle East. 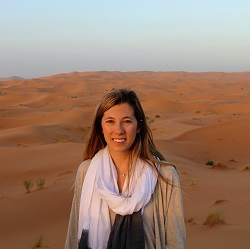