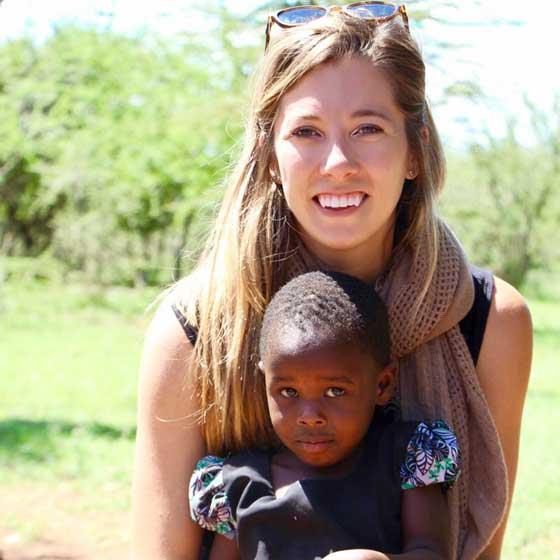 Kim’s penchant for the outdoors goes all the way back to her childhood. However, it wasn’t until she visited Zimbabwe at age 19 that she fell head-over-heels for travel. “From the moment my feet touched down in Harare, Africa overpowered me and surpassed any expectation I had,” she says. “The sights, smells, people, animals—it was unlike anything I had ever experienced.”

Once she caught the travel bug there was no keeping Kim off a plane. She’s studied abroad in Argentina and visited Brazil for the World Cup, but it was her six-week volunteer stint on a black rhino conservation project in Zimbabwe that really opened her up. “I originally traveled to Africa for the animals,” she says, “but what caught me by surprise was how much I loved meeting the people. This actually led me to return to UCLA and change my focus to international development.” She continues to follow current events with untempered interest, especially in historically and culturally fascinating places like Turkey and Iran.

Kim’s excitement for all adventurous travel is contagious. She thrives on finding out what draws GeoEx travelers to Africa, Turkey, and the Middle East, and creating journeys that exceed their expectations—in the same way countries such as Zimbabwe have done for her. “Zimbabwe is one of the last countries in the world run by a dictator, but the people I met and the experiences I had were only beautiful and positive,” she says. “Another place that often surprises travelers is Iran: despite what we often hear in the news, it’s an incredible, culturally rich, welcoming place. I love to share the natural wonders and human spirit of these regions, sharing the real heart of the place.”

Explore the US with Our Colleagues at Off the Beaten Path