Why Should You Visit Namibia? | Where To Go In Namibia | GeoEx

Home » Wanderlust » Why Should You Visit Namibia?

Why Should You Visit Namibia?

The main question most travelers have about Namibia is, “But will I see animals?” It’s a good question because, yes, you will see animals, but not in the great quantities that attract travelers to other parts of Africa. Namibia is characterized by its deserts, and deserts don’t sustain the mammalian abundance of, say, a Serengeti or an Okavango Delta. But its deserts are also its gifts, and the source of so much magic.

You can see animals here, but don’t come for them alone. When it comes to where to go in Namibia, there are an abundance of options. Come because you’ll see the world’s oldest desert and Africa’s least-densely-populated country. Come because you will see ancient and modern culture, but also, a lot of the time, you’ll see no one, and it will give you goosebumps. 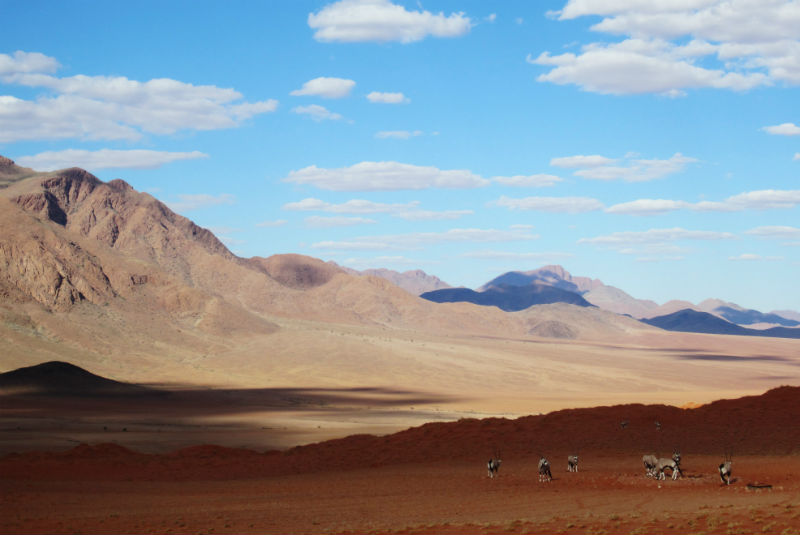 Namibia can’t be matched when it comes to abundant, wild space. It is almost the size of California, Oregon, and Washington combined–with only about 2.5 million residents in its diverse landscapes. (A useful comparison: There are about 13 million people in the five counties that make up greater Los Angeles.)

It’s sunset, and you are in camp. Grab a drink, have a seat, and look out. In the distance before you are the weird and wonderful creations of the mountains, where geological history whipped itself into cones and tables several million years before your check-in time.

Later, in your vehicle, you see a tree sprouting implausibly in the middle of sand. Zoom out into the air on a charter flight, and that tree has disappeared among a network of untraceable canyons that would take 100 lifetimes to explore.

Namibia’s landscapes are breathtaking for their beauty, but also their emptiness. When you visit Namibia, you feel plucked from our age and dropped back into a time where there were simply far fewer of us humans. It sounds bleak, but actually, it’s really beautiful. 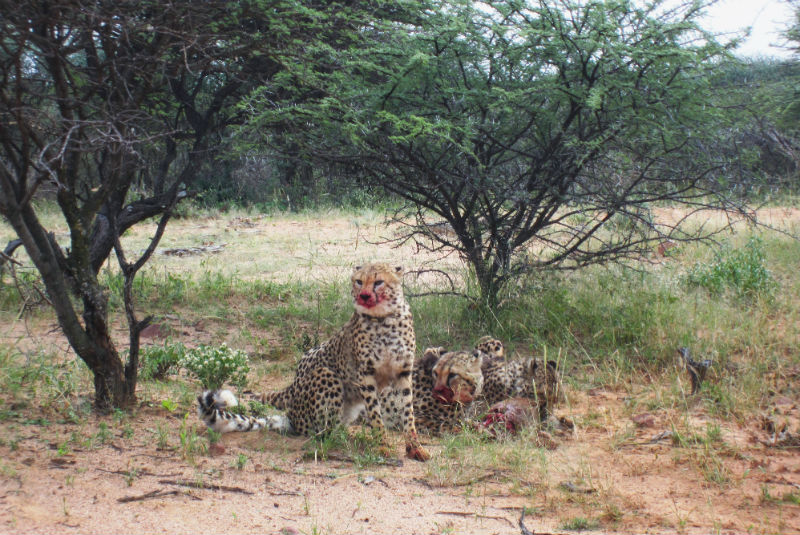 Now imagine you’re driving through the desert. You are rolling through riverbeds where water flows just a few days–or even a few hours–each year. Then the vehicle slows and stops, and you take out your binoculars and see movement among boulders: the flapping ears of a single elephant, and then another, and then another. Or a cluster of dots shimmering on the edge of the landscape: ostriches, half a mile away on the grassy plain. Or a trail of hoofprints leading into dry dunes: an oryx, pulled in that direction for a reason you’ll never understand.

Where is water? Not a clue. You would have no chance of survival if you were alone in this landscape, and yet here they are in their small groups or alone, surviving where it seems like nothing should. The wildlife are yet another expression of the landscape that made them, moving across the deserts in bodies that adapted specially to live in a place with a permanent water deficit. After all, this is a place where the largest mammals will walk miles each night in search of water, and where certain beetles have adapted to hoist their back legs into the air to trap moisture from fog. Safaris like this give you a feeling of proper disbelief and wonder, and to me that’s the magic of Namibia. 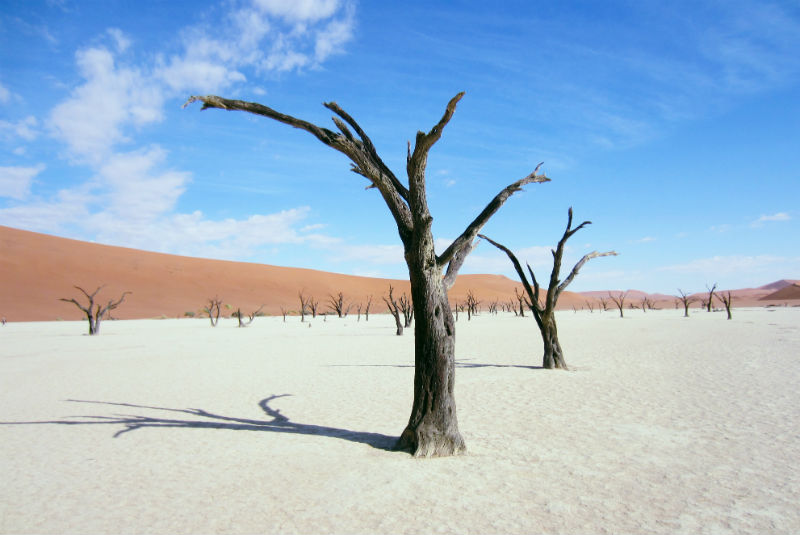 In a country as old as Namibia, where 15 million years is just the current dusting of sand on top of an even-more-ancient plateau, you are going to confront Time with a capital T.

Visiting ancient art sites is one of the most obvious confrontations with the past you can have. It’s a bit more relatable than geological time, since identifying with another human–even someone 6,000 years older than you–comes more naturally to most of us than contemplating the existence of a rock. Namibia’s Twyfelfontein is arresting, because when you glance away from the rock engravings–of elephant, rhino, giraffe, lion, some of them with human footprints instead of paws–you see a landscape that seems surreally unchanged from how it was when the artist first engraved.

You realize also how limiting language is for these sorts of things. “Old.” I used the same word earlier to disparage my phone, and now I’m recycling it to describe 6,000-year-old depictions of intense spirituality. You think, what good is language in a place like this? Words of description have reached their useful limit. Only poetry can begin to make sense of it.

Stars are not unique to Namibia, but then you come to the NamibRand and it seems like the constellations are most at home here. From this International Dark Sky Reserve, I gazed through a telescope at the illuminated skin of the moon, and at a star whose death had occurred millions of years ago, but whose light still reaches us now. On past safaris, I had seen many animals; in Namibia, I met the universe. 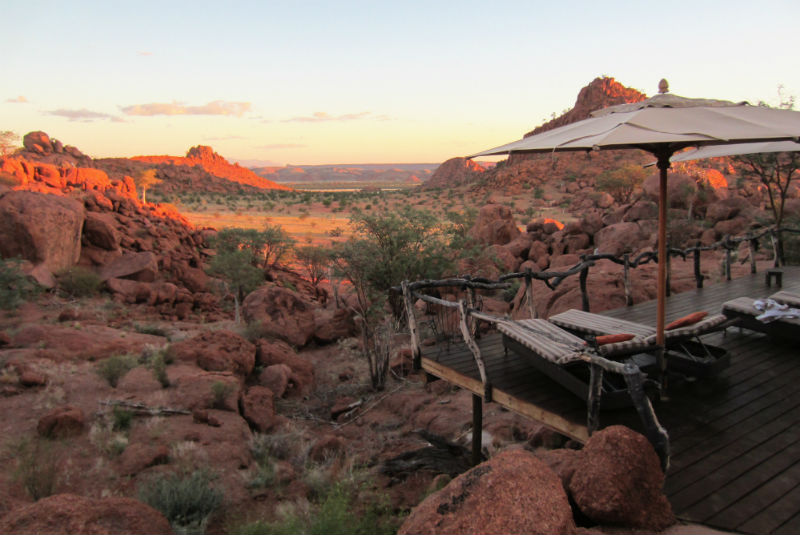 You might not expect a desert to provide so much hope for life, but Namibia is rich with it. This was the first country in Africa to include environmental protection in its constitution. Communities here that coped with discrimination and displacement have formed and manage successful conservancies–revolutionary enterprises that create income, pioneer community-driven tourism, and protect wildness. Namibia is one of the few places in the world where populations of certain critically endangered species are stable. So I’ll reiterate a point I made a bit earlier: Don’t tour Namibia just for the animals. Come for the belief that if something is possible, it’s possible here.

GeoEx’s Jessica Silber is an expert in safari planning. She’s lived in Tanzania and traveled throughout Zanzibar, Kenya, Botswana, Mozambique, and the Republic of the Congo. 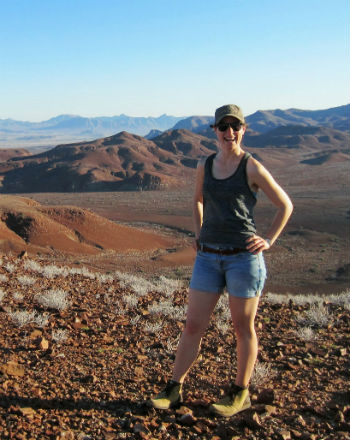