Why Explore Alaska’s Inside Passage by Small Ship Cruise 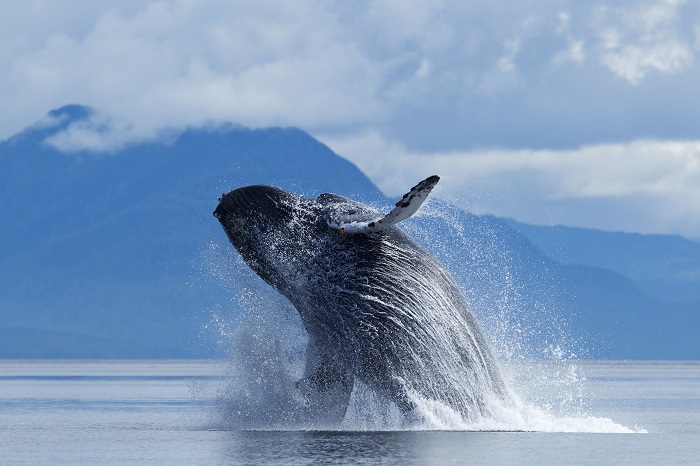 “There’s a humpback right next to the boat!” a passenger on the view deck shouts as we traverse Frederick Sound through Alaska’s Inside Passage. The whale makes an elephant-like trumpeting sound, then slaps its tail against the surface of the sea, sending up a saline mist that drifts over the boat. The 80,000-pound leviathan turns its head, gives us a one-eyed look and slips back down into the sea. In the distance several other whales breach, including two simultaneously.Had we been on a megaship we probably wouldn’t have seen this electrifying display because small ships can get to places the big boats can’t reach. And smaller ships have more discretion about their itineraries: Rather than stick to a strict schedule, our captain chose to linger one day so we could watch a pod of Orcas slice through the sea. And that day we were in Frederick Sound, we spent extra time watching the whales, creating memories that will last a lifetime.

Below are seven more reasons why small ships in Alaska are the way to go: 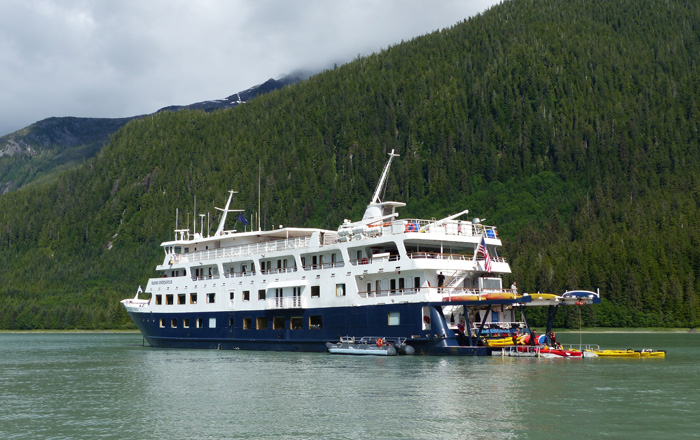 Small ships don’t go into ports for trinket shopping—we spent each night anchored in some remote and wild area, mesmerized by ethereal sunsets and lulled to sleep by the gently lapping waves. We really felt like we were away for a solid week, captivated by the rhythms of the sea.

It’s easy for passengers to get off the mothership for kayaking, stand-up paddleboarding, and hiking. On our trip we SUPed in a quiet bay as a pair of bald eagles watched from the top of tall trees. We kayaked so close to whales that we could smell their briny exhalations. Led by a naturalist, a group of us took a Zodiac skiff to shore and hiked atop glaciers.

3. You Can Join the Captain on the Bridge 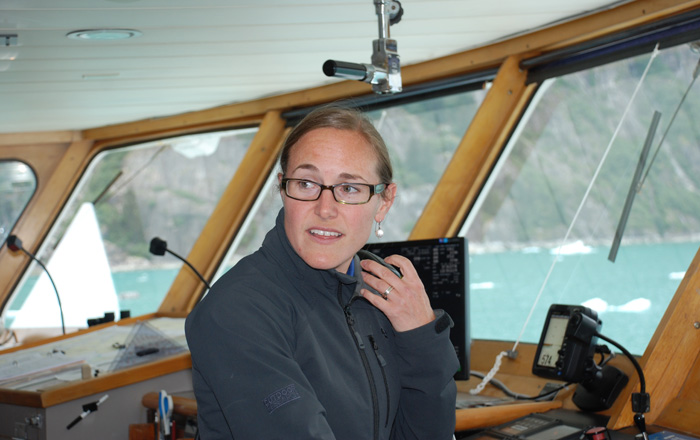 Our small ship has an open-bridge policy that allows any passenger to join the captain (when she or he isn’t otherwise occupied with steering the ship). I went up to the bridge one evening and got a short course from Captain Jenna Stevens (in photo above) on how to navigate the ship through the tight passages we explored.

4. Get Up Close and Personal with Calving Glaciers 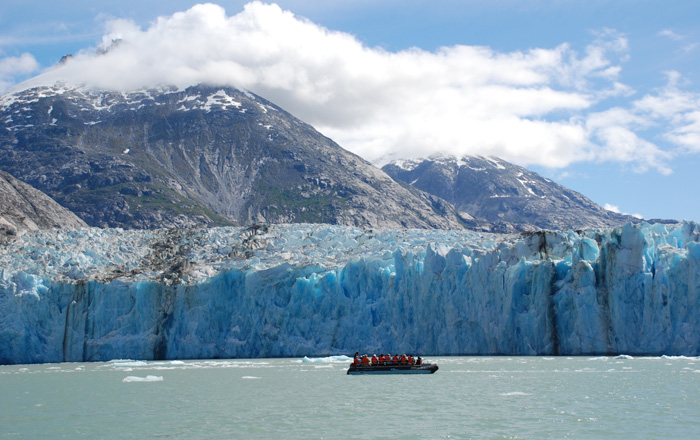 Some of the most spectacular sights—and sounds—on an Alaska cruise come from getting into the face of a calving glacier. Our ship motored up the milky blue water of Endicott Arm, a fjord carved by nearby Dawes Glacier, which has receded dramatically during the past century. 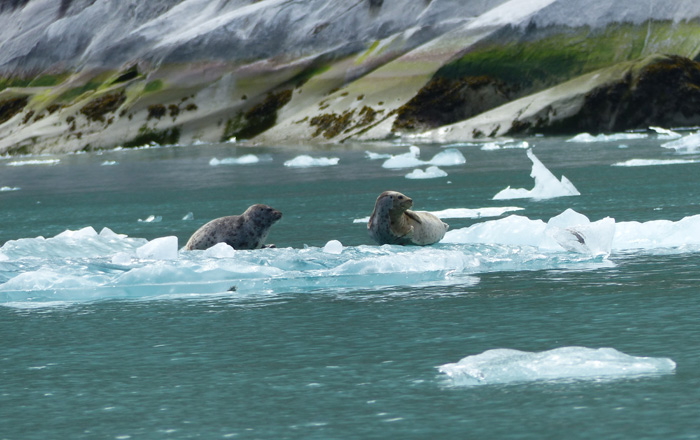 We hopped into a skiff, as aquamarine icebergs, some with seals perched on them, floated by. Our guide grabbed a chunk of ice so we could chill our cocktails with glacial ice that night, then she read a poem and served us hot chocolate with peppermint schnapps.

Approaching the face of the glacier we heard ice popping, water cascading, and then the sound of “white thunder.” Ice chunks the size of apartment buildings dropped off the snout, sending up splashes higher than the glacier’s 200-foot face.

5. You Can Dock at Glacier Bay National Park’s Visitor Center 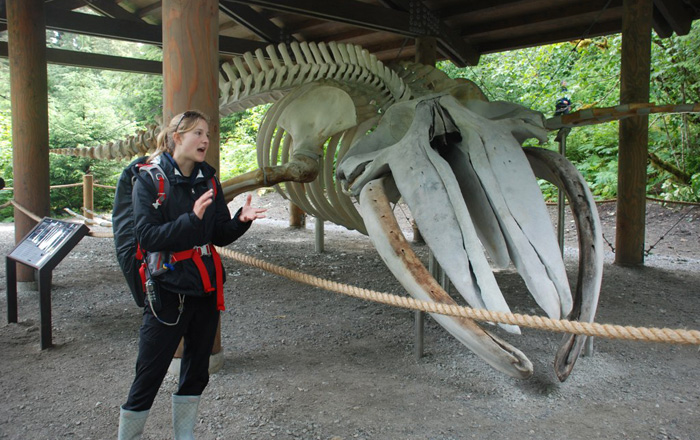 Only small ships and boats can dock at this center on Bartlett Cove, which is well worth a visit. On a naturalist-led hike, we learned that until 300 years ago this land was covered in ice. We sauntered through forests of western red cedars, hemlocks, and cottonwoods, and came to a 45-foot-long skeleton, the remains of a whale, getting a sense of how tremendously large these animals are.

6. Everybody Knows Your Name 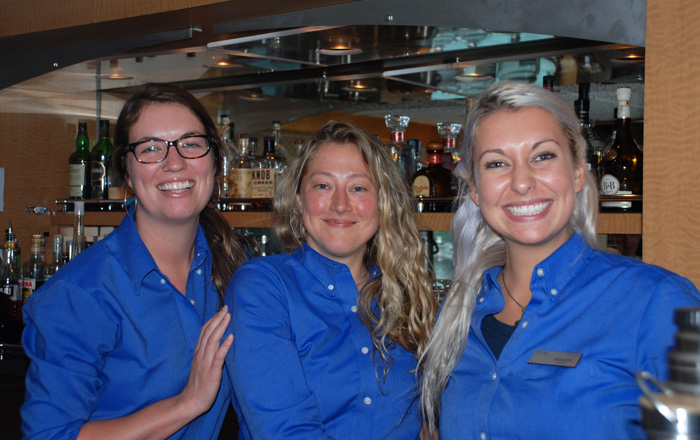 On a small ship you soon feel like a group of friends and family on vacation together. It’s easy to get to know other guests; the naturalists are eager to share their knowledge; and the crew soon learns what you like. One example: early on, the bartenders appreciated my fondness for fine tequila. 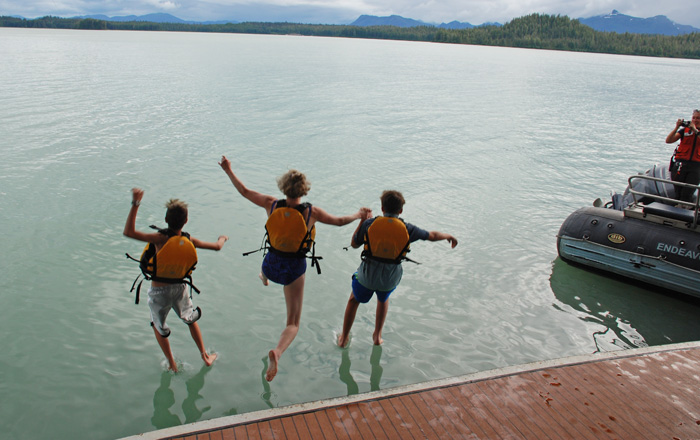 Near the end of our week we were invited to join a “polar plunge” into the icy water. Led by our ebullient marine biologist, Jackie Hedgpeth (center in photo above), a slender woman of a certain age who had gravity-defying hair before jumping into the ocean, we jumped into the frigid sea. The water was paralyzing cold, but my arms managed to get me to a ladder; then my legs carried me to the hot tub. Just a few steps behind me was our friendly bartender, with a shot of tequila and a pint of Alaskan Amber to chase it.

Michael Shapiro is author of A Sense of Place: Great Travel Writers Talk About Their Craft, Lives, and Inspiration. His story last fall on Vancouver’s sustainable seafood movement won the 2016 Explore Canada Award of Excellence.