When I told people I was going to Benin, Ghana and Togo, the usual response was a blank stare (indicating they weren’t convinced I’d just named three countries on this earth), followed by the tentative question, “Why?”

If I was being honest, my response was, “Because they’re there—and I’ve never been.” I didn’t really know what to expect from Ghana, Togo, or Benin. These are not countries that figure strongly in news stories or global power struggles. There are no great pyramids or famous waterfalls or significant African game.

But what these countries lack in obvious tourism star power, they more than make up for in their greatest resource: the people. A trip to West Africa is a reminder that in some places, the world is very much unchanged by time. 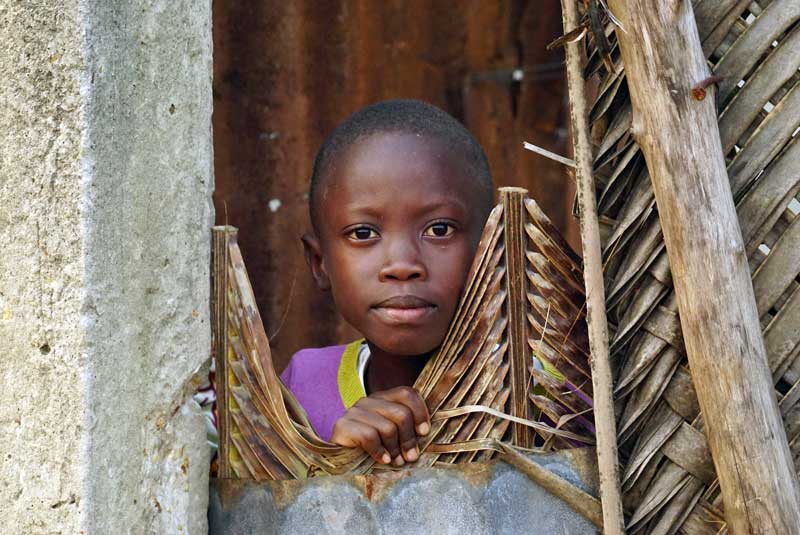 My group started our journey in the friendly French-speaking nation of Benin. The name Benin loosely means, “We are here, we are fine,” which pretty accurately represents the ambitions of this small nation. This is a country where traditional life reigns supreme—markets are full of sustainable foods and goods, and old traditions remain strong influences. 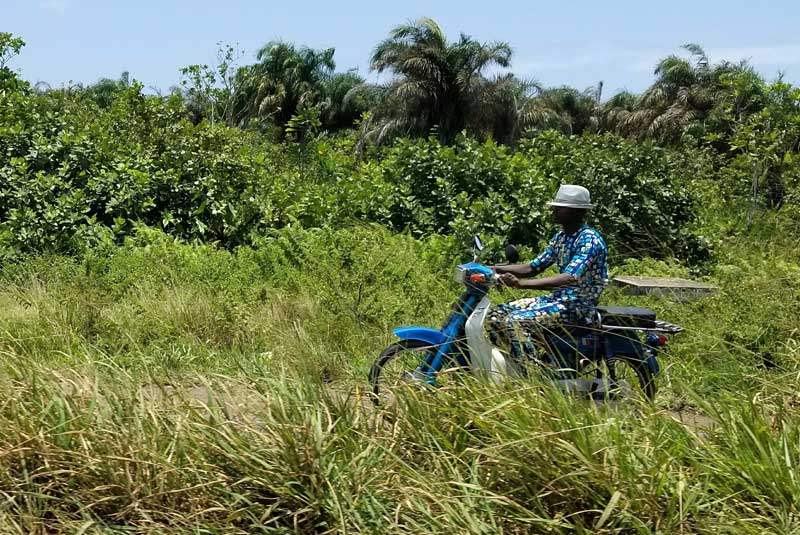 West Africa is a photographer’s delight. As you walk or drive around, you witness traditional life, venerable villages, and happy, smiling people. Exploring this region, you can’t help but think: This is Africa. 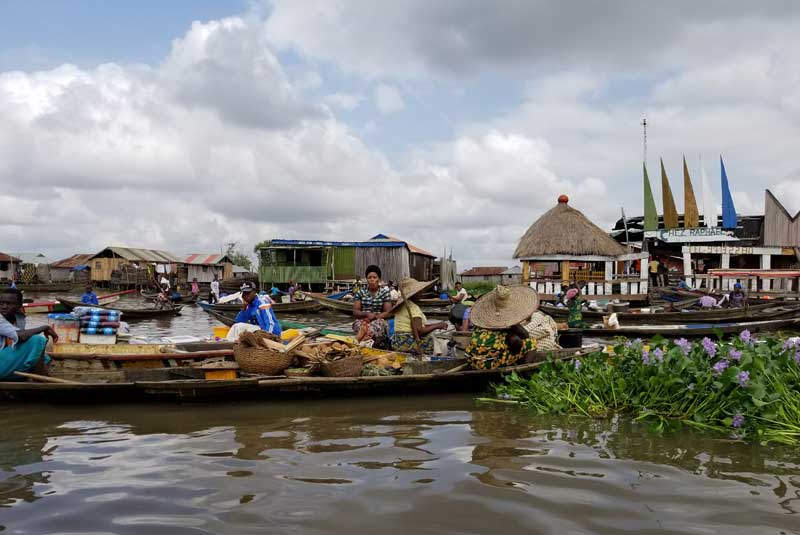 One of our first visits was to the floating village of Ganvie, not too far outside the capital of Cotonou. We learned that some 500 years ago, invading Fon warriors raided local villages, where they hunted and sold local people to the Portuguese. Fon traditions and customs forbade them from going on water, which resulted in the native peoples establishing floating villages to avoid capture. Fast-forward half a millennium, and some 20,000 people still spend the majority of their lives on this lake, living reminders of the influence of the trans-Atlantic slave trade. 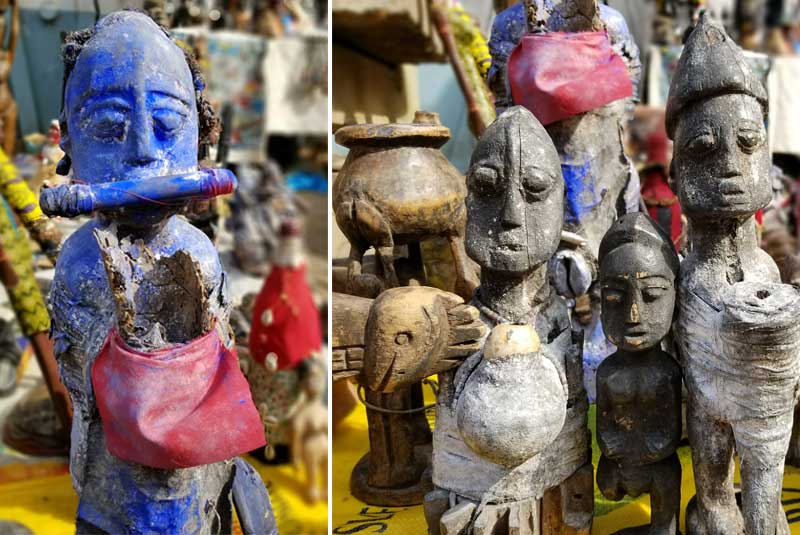 Benin is also the origin of voodoo, which is recognized as the state religion. Their belief in voodoo manifests in numerous ways, including fascinating mask dances. In most cases, as an outsider, you sit transfixed thinking, Where am I, and what am I witnessing? 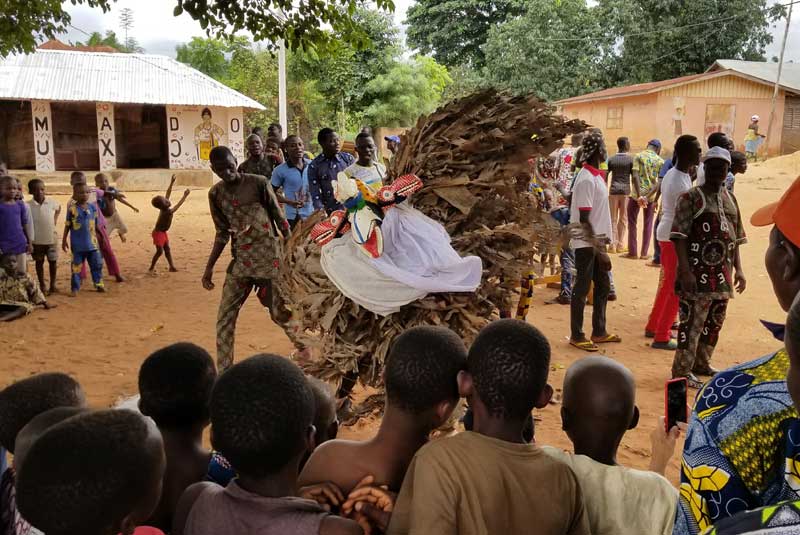 At the Gelede mask dance of the Yoruba people, men initiated in the secret ways of the voodoo appear wearing animal costumes or women’s clothing. Their dance is meant to be both satirical and educational. The spirits imitate a woman, usually in an obvious over-exaggeration of hip shaking or mock interest/embarrassment at the attention of a man. As the dance we watched progressed, locals invited us to join in the hip and shoulder dancing. The large circle of dancers and drummers continued on around us, with locals laughing at our poor attempts to match their seemingly effortless movements. 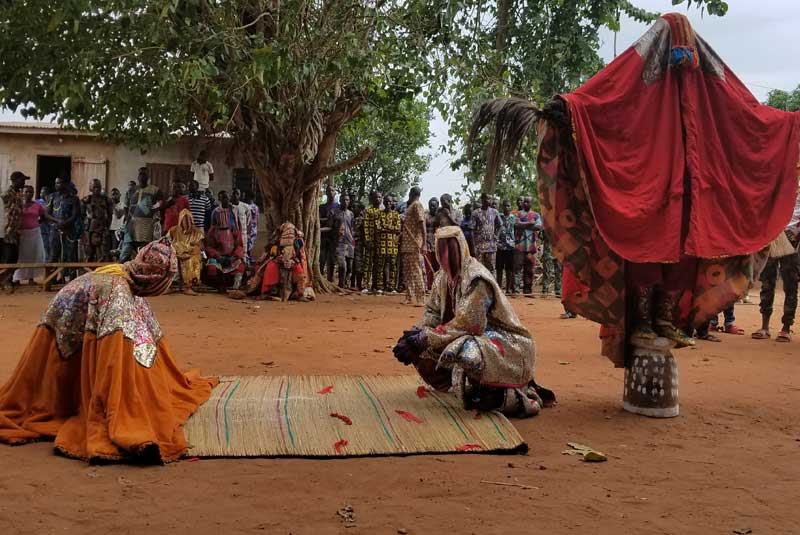 Here, during the Egungun dance, Yoruba people masquerade as their ancestors, honoring the dead and purifying the living. 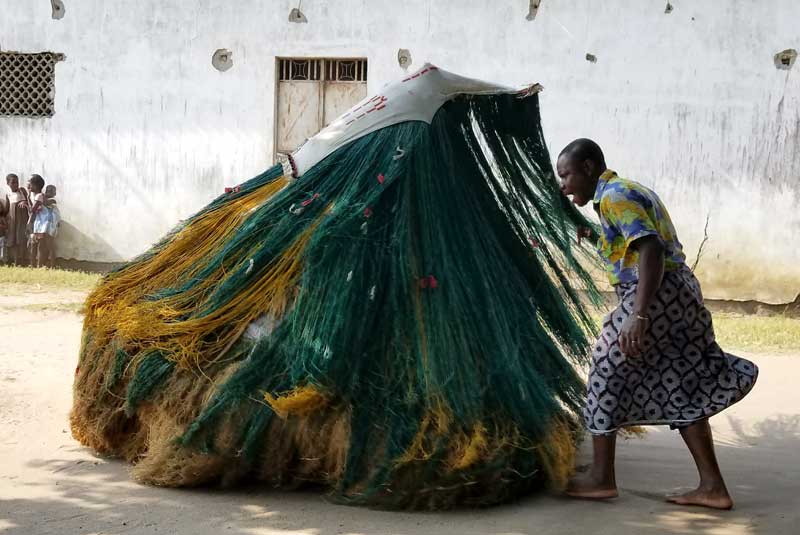 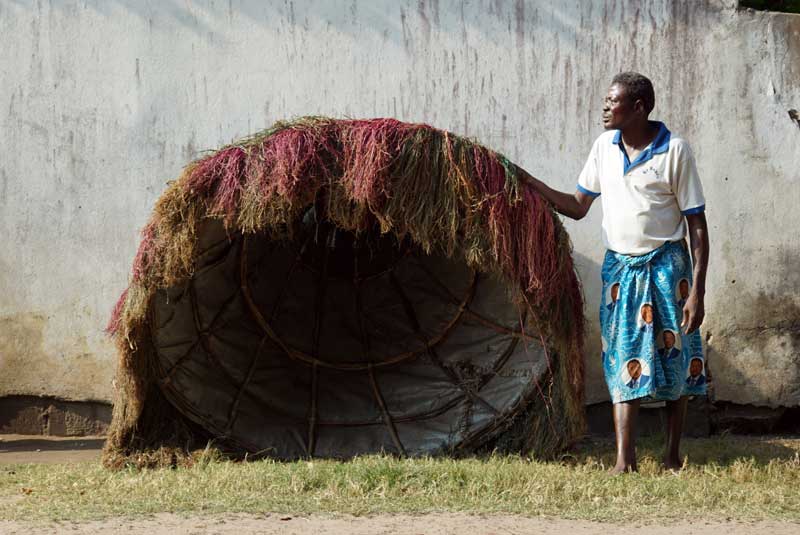 In yet another mask dance, the Zangbeto patrol the streets and warn the community of thieves and witches. Yoruba tradition holds that there are no spirits under the mask, only powerful spirits of the night. 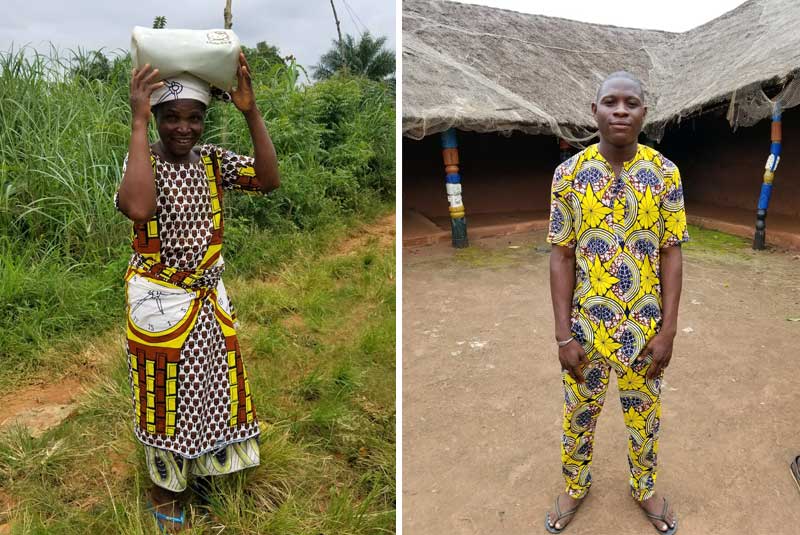 One of my favorite features of travel is seeing the wonderful fabrics people wear. In this part of the world, both women and men wear matching shirts and pants in colorful patterns and rarely do you see the same pattern twice! The people of Benin are prideful, and the clothing miraculously clean. I love how the bright outfits juxtapose against the rust-toned earth. 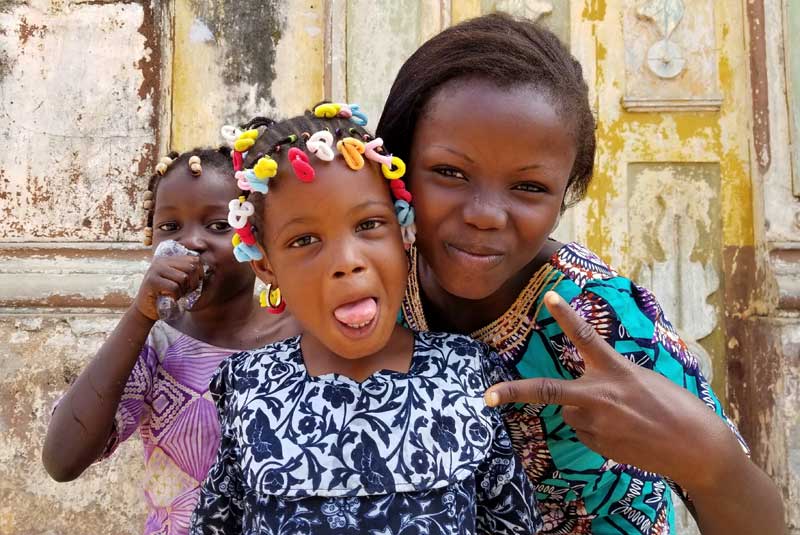 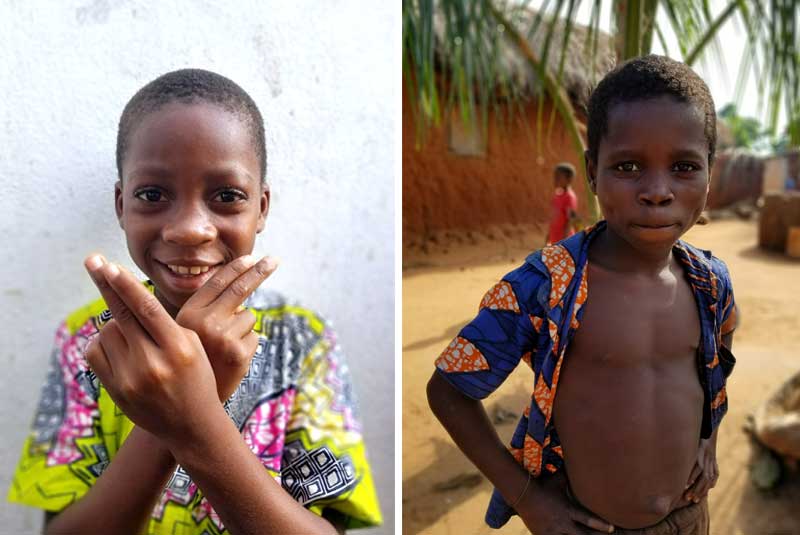 Throughout our tour of West Africa, one constant was the friendliness of the children. They often rushed up to us to hold our hands, look at our phones, or pose for cheesy pictures, only to giggle hysterically at their images. 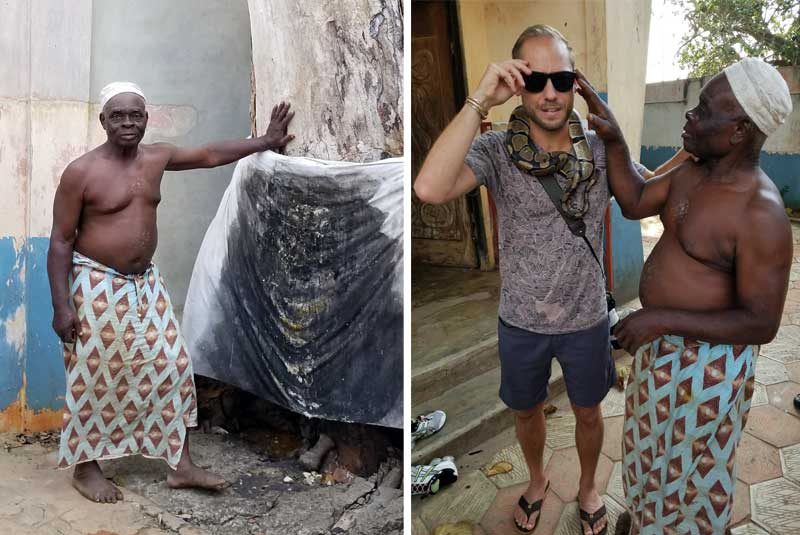 We also visited the Temple of Pythons, a historically important spiritual site located in the former slave port of Ouidah, Benin. In voodoo, snakes are important religious symbols and are highly respected. The python temple is home to dozens of snakes along with a holy tree that sits inside the courtyard, collecting prayers and animal sacrifices. I won’t disclose what I prayed for, but I can confirm that if my wish comes true, I must return to this tree and leave an offering in thanks.

The chief priest eventually came out to greet us, with a python around his neck. He asked where we were from and told us about voodoo culture and traditions. He also asked us to put the snake around our neck—for good luck (and a good photo op). 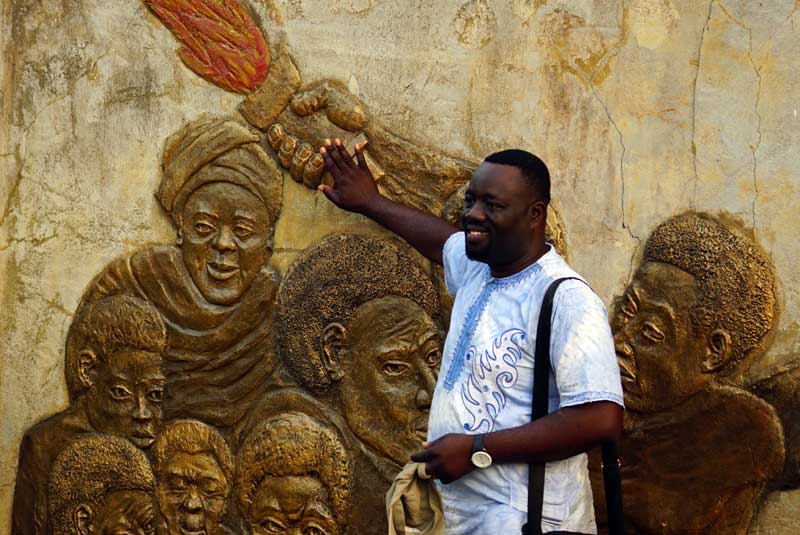 Our intrepid guide, Noah, a native of Togo, gave us elegant and moving history lessons on the trans-Atlantic slave trade. In Ouidah, we walked along the final few miles of a famous slave route, which is also a UNESCO World Heritage Site commemorating the horrors of the slave trade. 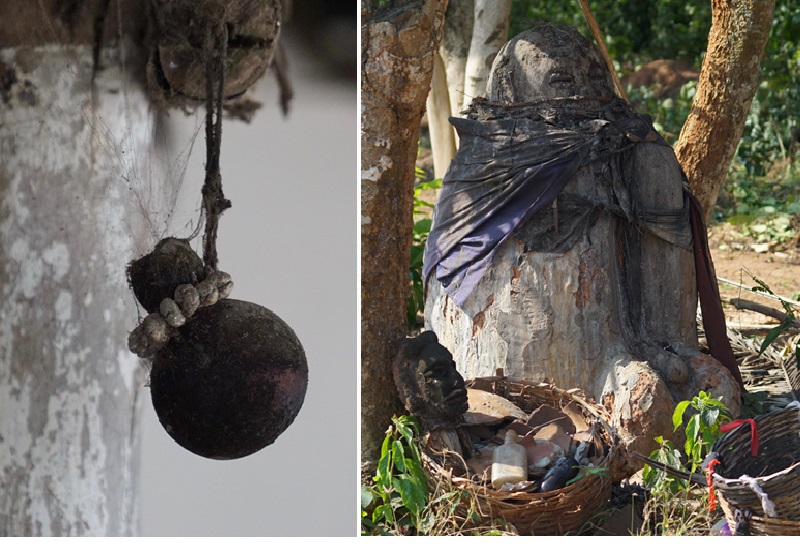 In voodoo culture, offerings are made to the spirits. We frequently saw totems or shrines with small bits of food, bone, or alcohol scattered at their bases. In people’s homes, small amulets hang from the ceiling to ward off the spirits. Priests and priestesses invited us into their homes to give us a blessing. 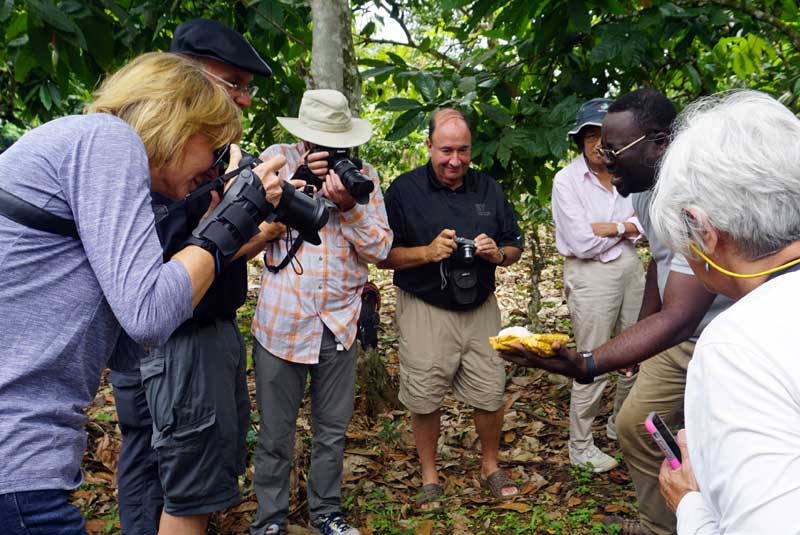 Throughout the trip, Noah made unplanned stops on the side of the road to visit local producers of cacao, cassava, palm nuts, and other local products. Here, Noah is explaining to our group how cacao grows and is harvested. 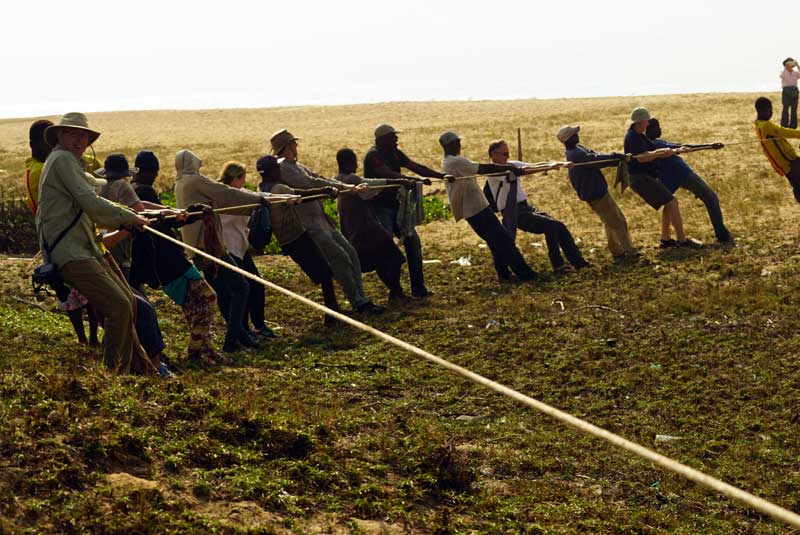 In another random stop, we jumped out of our vehicles to assist fishermen hauling in their massive nets. 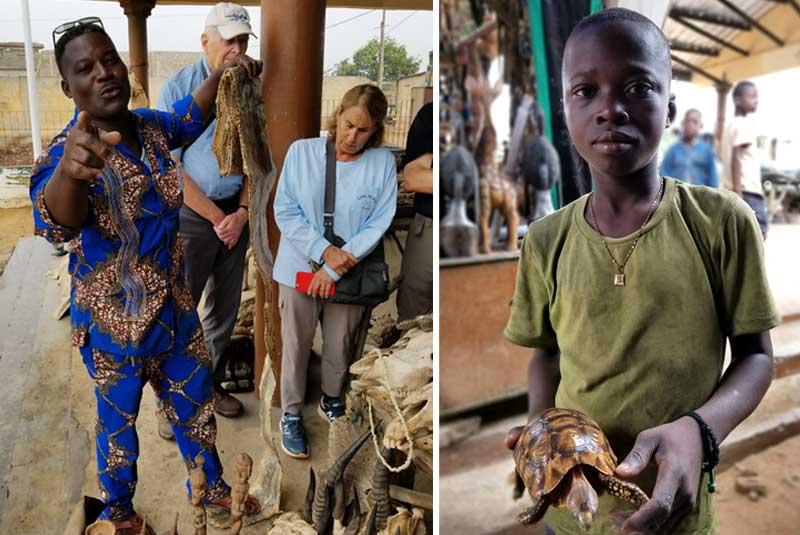 Togo’s capital of Lome is home to one of the largest voodoo markets in the world. The market sells fetishes, amulets, and charms that, once blessed by a voodoo priest, possess power or luck or fertility. There is a certain sense of forbidding that hovers thick in the air as you walk around. Or perhaps it was merely the smell of rotting birds, monkey heads, snakes, and lizards. 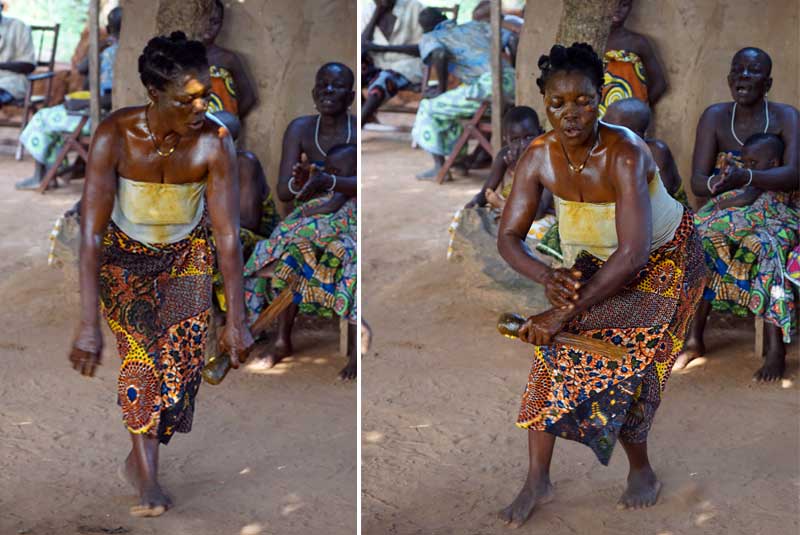 Another highlight experience was a trance dance, where a rhythmic communication occurs amid the dancers and the drummers, resulting in women collapsing or running around the mud brick village, stomping their feet, burning incense, and babbling incoherently. 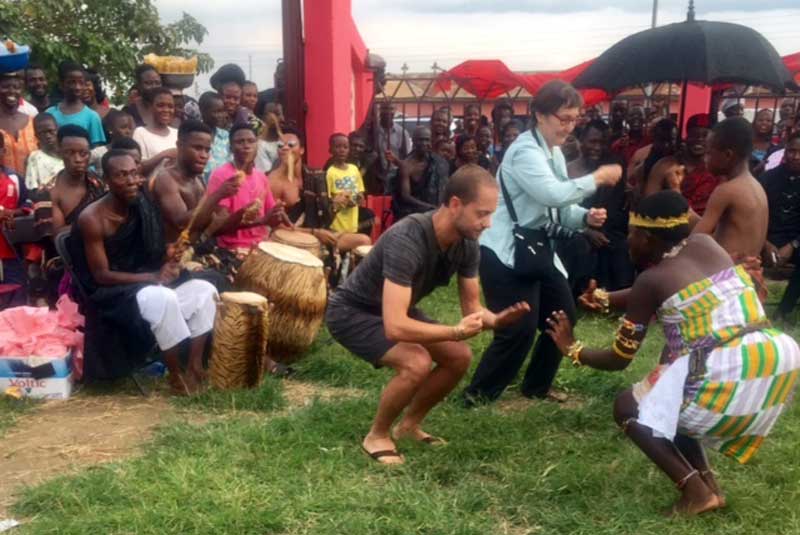 In Ghana, funerals are publically announced and people are invited to join in the festivities to honor the departed. At this particular funeral, after paying respects to the family members, I was immediately invited to dance, which was such a funny transition from mourning to laughing. It reminded me more of a celebratory wake than a somber event.

In the Ghanaian city of Kumasi we witnessed the Akwasidae Festival, honoring the Ashanti King. Lesser chiefs and local kings arrive protected by umbrellas to pay respects and homage to the powerful and long-reigning monarch. 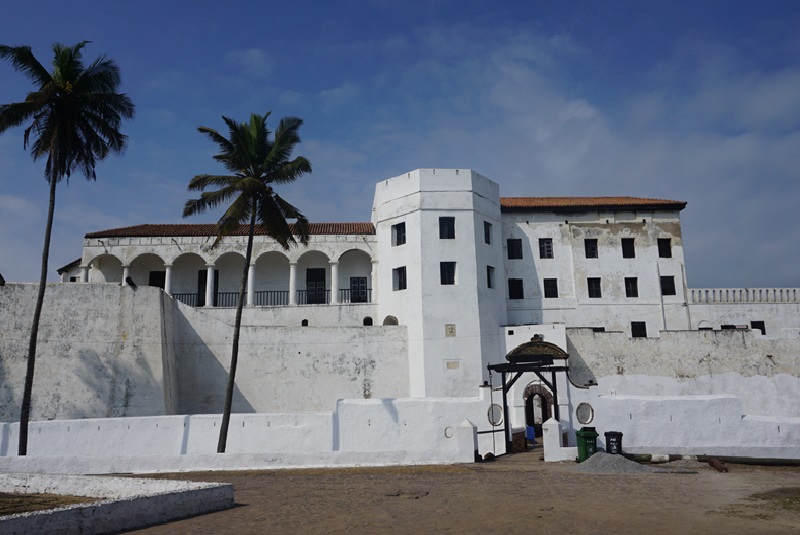 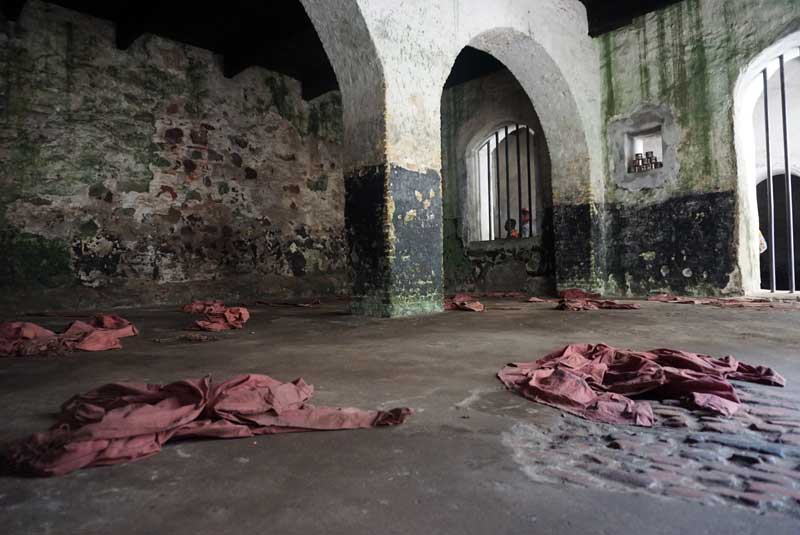 As our journey neared the end, we visited old colonial forts used to house and process millions of people kidnapped in Africa, sold into slavery, and eventually shipped across the Atlantic to the new world. The experience is sobering; it’s hard to process the atrocities that were committed in these 400-year-old structures. 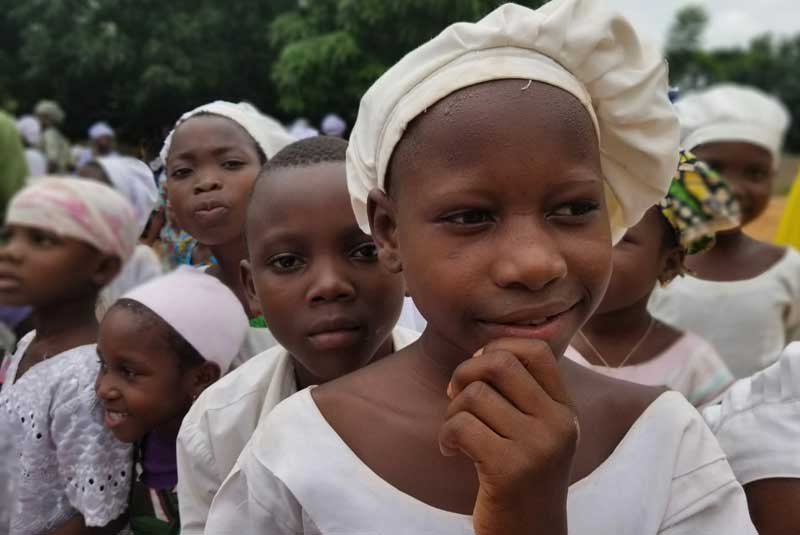 One day, Noah heard the sounds of a local gospel church and decided to make an impromptu stop. As we entered the large cement brick building, the crowd of parishioners, dressed in white, parted way for us, rearranging chairs and inviting us to join the song and dance. Our group was beaming as we danced with the singers, danced with the priests, and laughed with each other, all while the choir sang beautiful songs.

This is West Africa: One minute you are steeped in voodoo culture and African drumming, and the next minute you are embraced by local Christianity and a gospel choir. It was just terrific.

Jesse Knight, GeoEx Guest Services Coordinator, is a lifelong traveler. In addition to dancing through West Africa, he’s trekked in the Himalaya, road-tripped across Bolivia, and caught and tagged birds in Zambia.