Tibetan Bargain with a Twist | GeoEx

Tibetan Bargain with a Twist 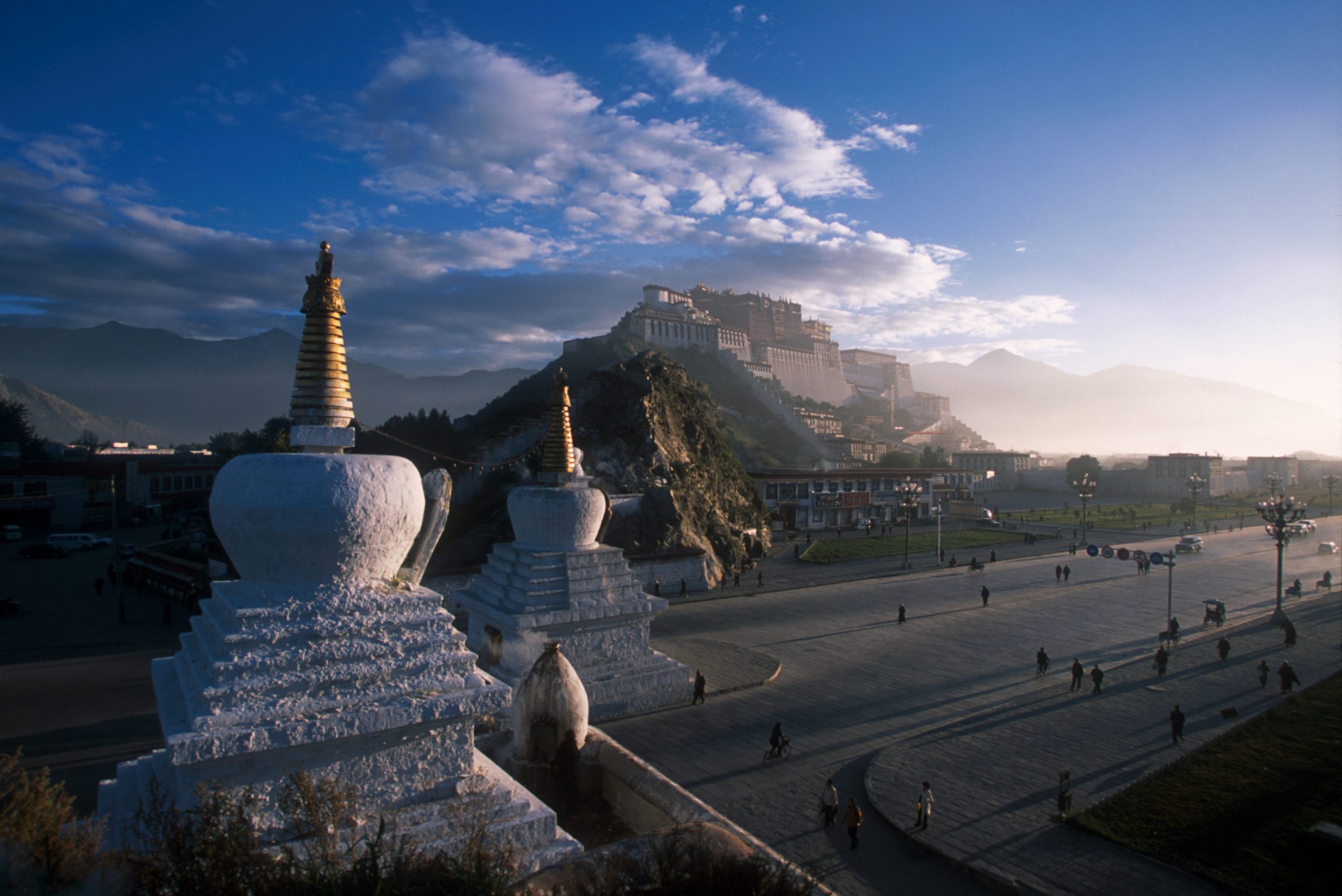 “Please! Please!” the Tibetan woman pleaded, her young son trailing behind her. She approached me in the ancient market of Lhasa, the capital of Tibet, holding an orange beaded necklace that hung around her neck and smiling sweetly as she implored me to buy it.

I didn’t want orange beads. I was on an extended solo trip through Asia and, wanting to travel as long as possible, had to be judicious with my spending.

“Please!” she said. It must have been the only word she knew in English.

China had opened Tibet for independent travel only three months before so my Western face was a novelty. Or maybe she sensed that I love unusual jewelry.

She was insistent yet endearing with her lovely smile and that mischievous twinkle in the eye that characterizes Tibetans. Red and brown yarn twisted through long black hair piled onto her head, and in front a few strands threaded through four small turquoise beads. A rough black sash with pockets hung over her pink-striped blouse and gray skirt, and a small pouch secured with string peeked out above it. Her son, who was about nine, stood silently at her side, a threadbare brown jacket over his red shirt and an unsure look on his face peering below the brim of his gray cap.

Again I said, “No,” to beads – but I pointed to the bracelets on her wrist.

She removed one: a strip of twisted brass, twisted again with copper and silver, and shaped into a rustic cuff.

“One yuan,” I said, holding up my index finger. It was a ridiculously small sum. About 50 U.S. cents.

She pretended to be horrified. Then she indicated “18 yuan.”

This dance continued, each of us alternately pretending to be offended at the other’s offer and tendering a new price. We grinned, laughed, and settled on six yuan.

That was fun, and I loved the bracelet. I pointed to another and off came the twisted brass, copper, and silver design, smoothed into one solid piece. We repeated our game, faster this time and with fewer dramatics and even more smiles, our eyes meeting with laughter, but we got to the same place, six yuan.

Next I bought a silver ring. Our opening offers were not so far apart this time, and we completed our transaction quickly.

Behind us, Lhasa’s denizens, nomads, and worshipers from across Tibet ambled around the “Old Town” section of Lhasa – the Barkhor, the maze of dirt alleys twisting among 700-year-old stone buildings encircling the most important Buddhist temple in Tibet, the Jokhang. Many Tibetans twirled brass prayer wheels, small cylinders revolving on a shaft, each spin offering a prayer for compassion. For more than 13 centuries Tibetan pilgrims have reverently circled the Jokhang Temple, always clockwise, always with the temple off their right shoulder, each half-mile circuit a prayer.

I gestured toward the procession, and my new Tibetan friend, her son, and I joined the throng. We strolled through the alleys, smiling, laughing and looking at stalls full of bells, prayer flags, saddle blankets for yaks and hand-loomed fabric in stripes of fuchsia, ocher, indigo, and emerald.

Pilgrims stretched out full body-length on the dirt road, marked where their extended hands touched, stood up, moved their feet to where their hands were and repeated the process as they circled the temple and the Barkhor. Some used the same grueling technique to circumambulate Mt. Kailas, the holiest mountain in Tibet – a distance of 33 miles. We looked at each other and nodded with respect toward the pilgrims.

Her son’s eyes, wide-open, followed a man who whirled a paper cone around the inside edge of a circular metal pan, accumulating white spun sugar with each twist. I bought cotton candy for the three of us, and the boy beamed.

My friend led us toward the Jokhang, past a dozen Tibetans prostrating themselves at its entrance, and into its candle-lit darkness with the scent of juniper incense blended with the pungent odor of burning yak butter, the rancid aroma that permeates Tibetan temples. For two hours we silently turned dozens of prayer wheels, again and again. We were the energy source spinning golden cylinders engraved with prayers and sending those prayers to the heavens.

Rejoining the circuit, we stopped at a Tibetan merchant’s table. The merchant spoke English. He had left Tibet as a child many years before, and now that China had opened the border with Nepal, he had returned as a businessman.

“Your friend’s name is Gele,” he said. “She has a 16-year-old daughter, who is on a pilgrimage to Mt. Kailas. Gele is a recent widow, and she’s trying to move from Chamdo in eastern Tibet to Kathmandu in Nepal.” She had traversed half of her 1,000-mile voyage. I said I was impressed.

Gele reached into her pouch and brought out a one-inch, camel-shaped brass pendant. Its plain surface was worn smooth, and a hand-braided string looped through a hole in its center. “She said this was made by the gods and dropped from the sky,” the shopkeeper said. “I can tell it is very old.”

The magical story intrigued me – I bought the amulet for a few yuan, a price I thought was too low, but she wouldn’t go higher.

“She says you’ve helped her a great deal on this journey because you’ve bought so much of her jewelry, and now she has money to travel.” I asked him to tell her how much I treasured her jewelry.

He said she wanted to meet the next day so I asked where and at what time. He said not to worry. “She will find you. These people are very clever.”

She did find me. Again we circumambulated the Barkhor three or four times.

I pointed to her squared-off brass ring with a small turquoise stone in the center. She took it off. It was rustic with rough edges – sturdy with geometric patterns engraved around the stone. And I wanted to help her with her trek – although the distances were shorter, her travels were more monumental than mine. If I had to cut my trip short by a few days, I would survive. It was she who was beginning a new life or would be if she could get herself and her son to Nepal. I would offer her earlier starting price.

She shook her head. No, no, no. She held up one finger.

I held out 20 one-yuan bills. She took one. I gave her the others. She pushed them away.

“No!” I said. “You must take more!” We laughed. But she wouldn’t take more. In bargaining throughout the world I’d never encountered such a thing – she was refusing my higher price. Surely she could use the money. But she had enough for her needs. I was stunned – I could only look at her and smile in amazement.

We walked again, watching the pilgrims, smelling the juniper incense, hearing the prayer wheels spin. Then Gele gave me her last bracelet.

April Orcutt is a contributor to TravelandLeisure.com (the website for Travel+Leisure magazine), the Los Angeles Times and the San Francisco Chronicle. Her stories – often along with her photographs – have also been published in National Geographic Traveler, MSNBC.com, Yahoo.com, the Chicago Tribune, New York’s Newsday and many other American and Canadian newspapers and websites. Her travel essays have run in newspapers and six anthologies, and April won the Gold award in the Personal Comment category of the 2011 Lowell Thomas Travel Journalism Competition.