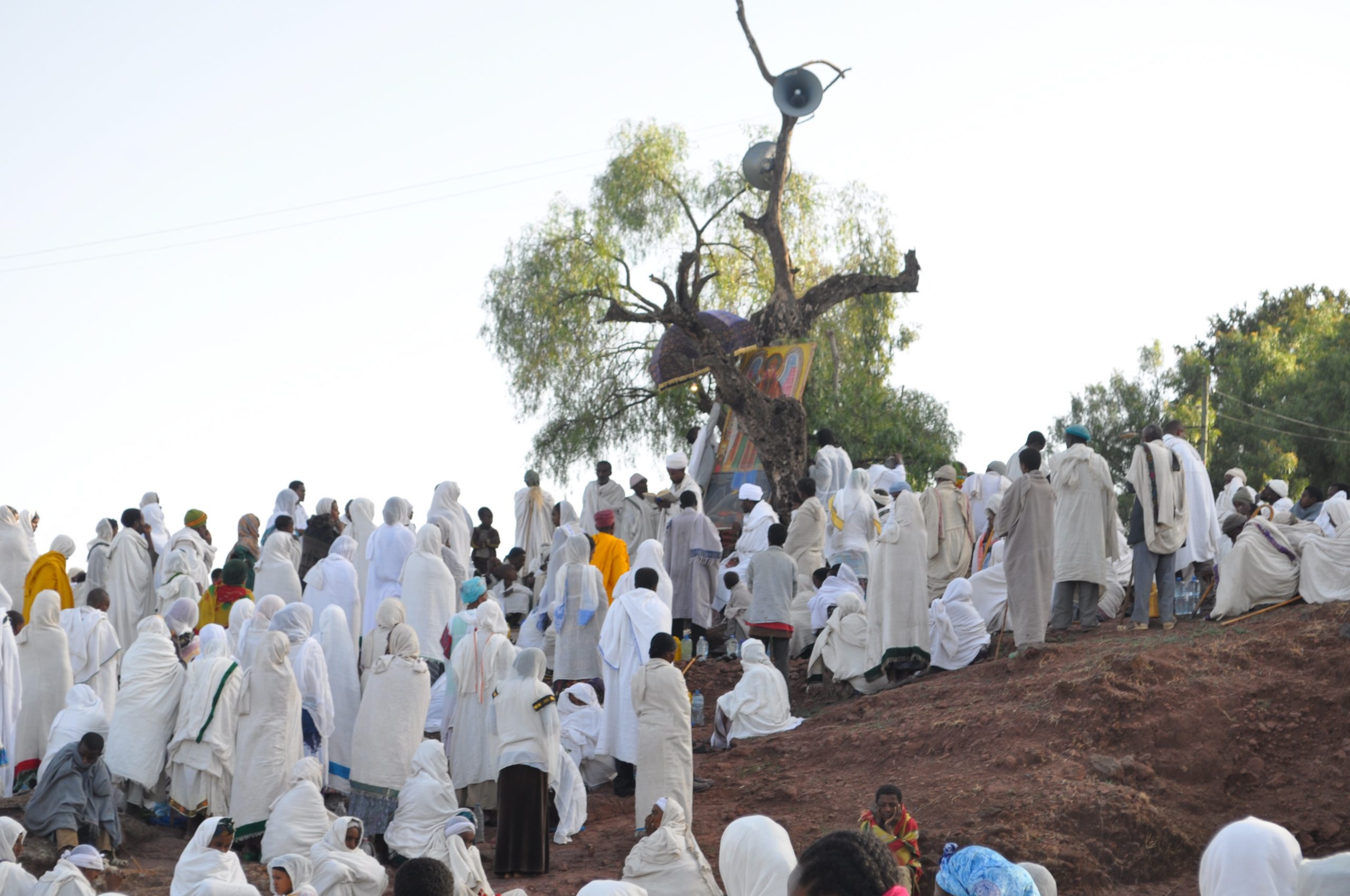 “You are lucky. You are so, so lucky,” my guide Samharawhit, or Sam, said with a head shake. We had just arrived in Lalibela, home of the famous rock-hewn churches. The night before, I had asked her if it would be possible to see a service in one of the churches, as the Lalibela UNESCO site was still a place of worship and pilgrimage for Ethiopia’s Christian Orthodox faithful. “Tomorrow is the Feast of St. Michael. There will be a service.” Sam made arrangements for us to arrive at 7 a.m. – five hours after the start of the service.

This kind of luck – and access – highlighted my recent Ethiopia trip with GeoEx this past May. A year ago, I had been inspired to visit Ethiopia and Lalibela after reading about Pico Iyer’s experience in the ancient city. When I learned that visiting this sacred 12th-century site was part of an eight-day custom cultural tour to the north of the country, I was hooked.

As it turned out, the tour taught me that there was much more to Lalibela than the carved churches.

The Lalibela historical site houses 11 churches, most constructed by King Lalibela in the 12th century and one constructed by his wife. They are exquisitely preserved and said to represent a new “Jerusalem” in Ethiopia at the time they were built. The tour of all 11 monolithic buildings spanned two days. On the first day, Sam and I went from church to church, awed as around each corner red, square walls shot up three stories high. Windows shaped like crosses hinted at the purpose of each building. I saw the influence of other religions carved into the stone – a Hindu swastika and the Jewish Star of David.

Some churches had smooth, veined doors with hand-sized iron locks covering the carved entrances. They were open to let a parcel of light into the dark narthex. At each entrance, we removed our shoes before walking into the cavernous interiors. The inside décor varied, but included paintings and carvings around the same theme of the Trinity, which serves as the heart of the Ethiopian Orthodox religion. Paintings of St. George – the patron saint of Ethiopia –  and his white horse hung from the walls or stood propped on stands. Priests in white robes and turbans stood in the naves, leaning on prayer staffs, silently watching the prostrated worshippers and curious visitors.

On the second day, Sam and I awoke early to see the service at the churches. The Amharic chanting for the Feast of St. Michael had started at 2 a.m. When we arrived towards the end of the service, at 7 a.m., the air was still cool and the light a gray yellow that appears right after sunrise. The hill was covered in white-scarved worshippers who carried some version of three things: a prayer staff, a bottle of water to be blessed, and a Bible. We stood shoulder to shoulder with Ethiopians of all ages, some groups covering three generations.  I was one of only three tourists surrounded by hundreds of devotees. As a traveler, I was there to witness, not to worship, but still there was a feeling I could not ignore; the waves of devotion turned my head toward the red-and-gold-robed priest at the top of the hill, whose voice was chanting readings from the Bible over a loudspeaker.

After a half hour, Sam led me into the Church of St. Michael for the final part of the service. I grasped her hand through the narrow passage that was made even narrower by women covered from head to toe in white, pressing their bodies to the rock walls or folded over on the floor. Inside, there was a large crowd, gender divided — women on the right and men on the left. Four or five people deep, the devotees formed a circle around the church’s center, which was about 10 meters long. Three boys beat ceremonial drums in a soft, constant rhythm. They had been playing since the service started. The three priests from outside came in and chanted more. The chants sunk into the rock walls and our ears rather than carrying over the open hillside. I felt like I was encompassed by worship and devotion. I did not understand the Amharic, but at that moment, I understood faith at this thrumming church service, in an ancient rock church, at the end of a pilgrimage.

At the end of the service, the attendees crowded one of the priests for a blessing. Sam placed her palm on my shoulder and pushed me forward. She didn’t need to – I was already feeling my way through the rock church for the holy acknowledgment.