Memories from the Silk Road 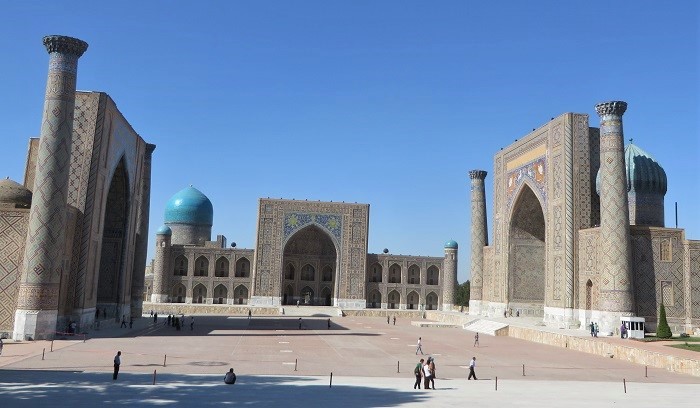 Several GeoEx staffers have recently traveled across Central Asia, following the fabled Silk Road. I asked them to share what stands out in their memories from their adventures in Uzbekistan, Turkmenistan, and Kyrgyzstan.

The Magic of Melons 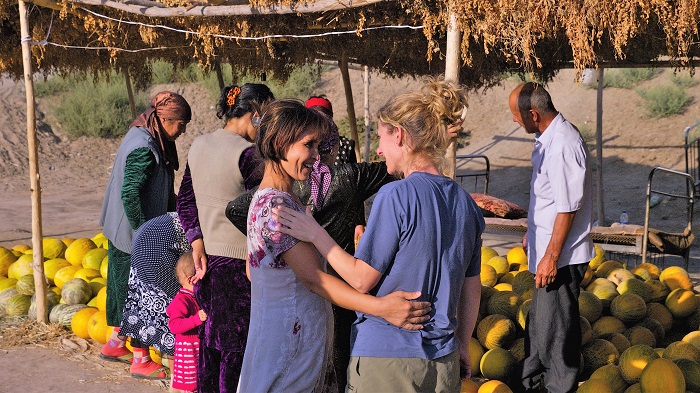 Fun fact: Uzbekistan is known for its melon production, and its melons are beloved for their exceptionally sweet flavor and juiciness. I learned this while on the road to Khiva, surprised to see one roadside stand after another. Piles of enormous yellow and green melons lay on the ground, usually next to the farmer’s Soviet-made Moskvitchs (“worse than Ladas,” according to our guide). Eventually we pulled over at a collection of stalls, busy with locals making their own purchases. The men and women seemed surprised and delighted to have our small group pull up. They laughed and joked with us, and offered us sample after sample of incredibly delicious fruit. We tasted four varieties in total, and I bonded with a woman named Maria, even though neither of us could speak a word of the other’s language. –Amanda McKee (photo by Kurt Ossenfort) 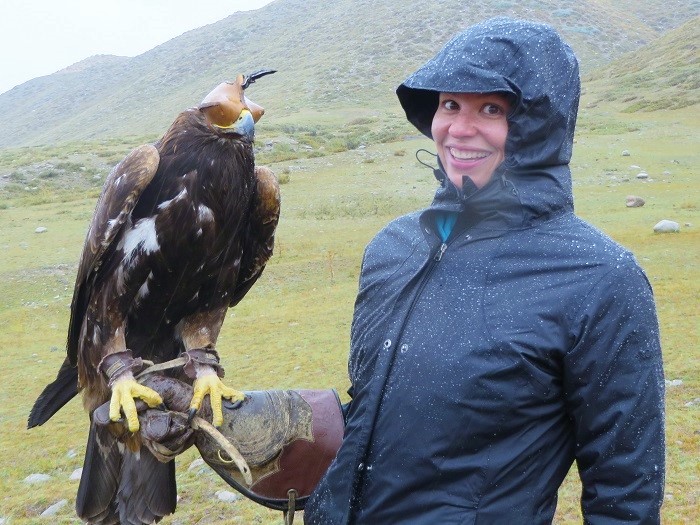 In Kyrgyzstan’s rural Djety Oguz Gorge we met with an eagle hunter. He gave us a fascinating demonstration of this age-old practice, where nomads train the strong birds to hunt for them. The speed and precision of an eagle is astounding! Afterward I got to hold the bird. I couldn’t believe how heavy he was or how powerful his claws felt on my arm. In the photo above, we’re both wearing hoods, so you can’t see the eagle’s expression—but I’m pretty sure he looked as excited as I did. –Errin Mixon 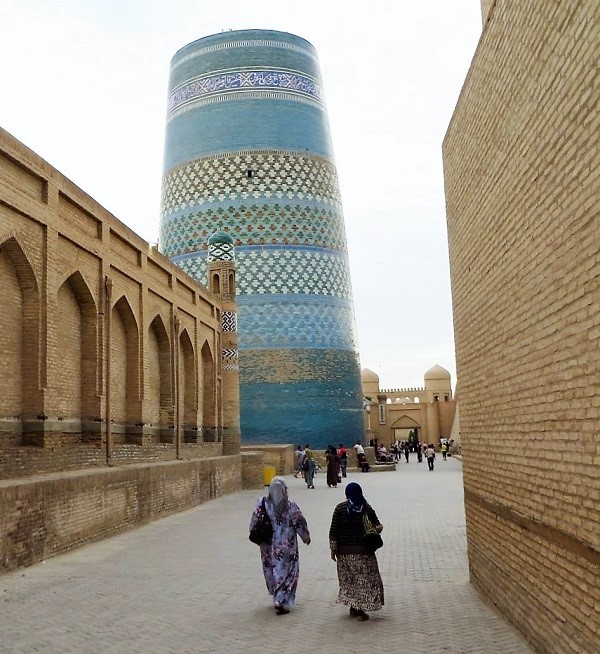 What surprised and impressed me was just how unique each of the ancient cities in Uzbekistan actually is. I was prepared for Khiva, Bukhara, and Samarkand to have amazing Islamic architecture, but expected them to be similar. Here we go, I thought to myself, more mosques, madrassas, and minarets. But they are so distinctly different from each other. Khiva is wonderfully serene, an open-air museum surrounded by walls with a quiet dignity about it, especially at dawn and dusk; Bukhara’s bustling shops, cafés, and coffee houses make the city’s small ancient center feel alive; and then there is Samarkand, a much larger metropolis with some of the most imposing and magnificent Islamic architecture in the world. –Glenn Ringer 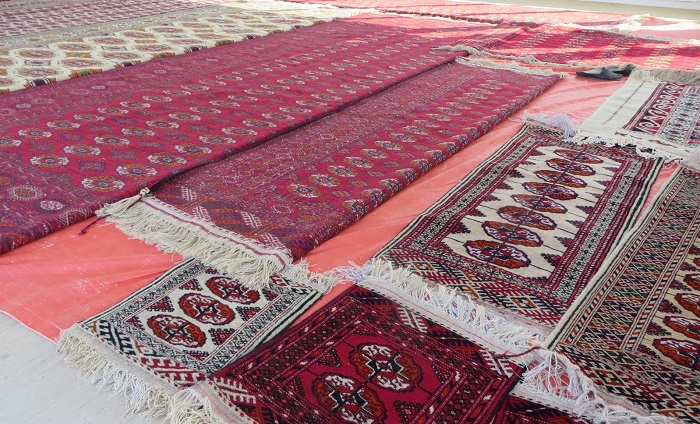 I loved learning about Turkmen carpets at Ashgabat’s carpet museum. The weaving culture derives from the nomads, and the geometrical designs vary from tribe to tribe. Those who can decipher the code can “read” the carpet to see where it comes from. The art is so prized in Turkmenistan that the layout of the sprawling Tolkuchka Bazaar mimics a carpet medallion. –Amanda McKee 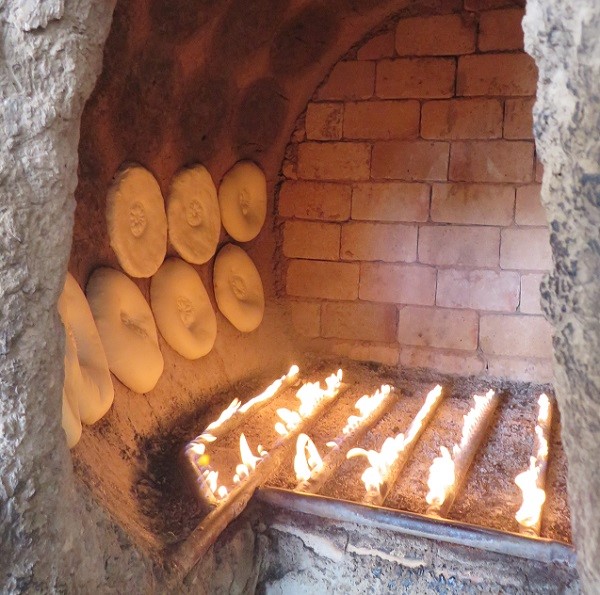 Uzbek flatbread, or non, is an important part of Uzbekistan’s tradition of hospitality. Before being baked on the hot walls of clay (tandoor) ovens, the loaves are shaped round and decorated with metal bread stamps called chekich, along with some impressive handiwork. Different cities are known for different patterns and styles, and certain special occasions (like engagements) call for colors and seeds. When it’s shared, it’s always ripped by hand, never cut with a knife. Vendors have come up with ingenious carts and bicycles to transport the loaves to market. You can’t beat it when it’s fresh out of the oven. –Urs Hofmann 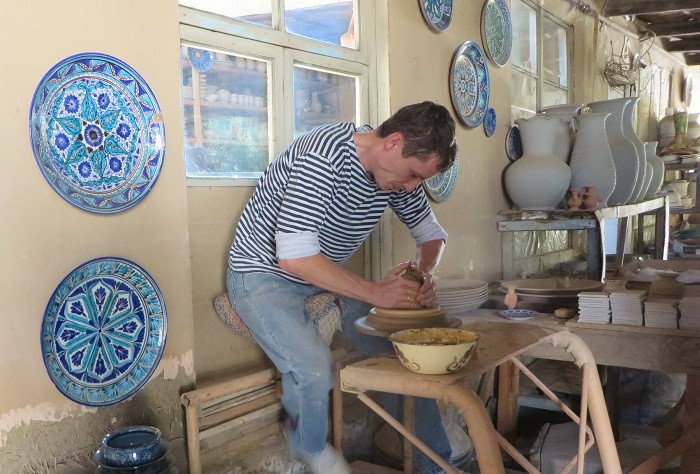 After seeing so much gorgeous pottery across Uzbekistan—from Khiva to Bukhara, Samarkand to Tashkent—it was a real treat to stop at the studio of a master ceramicist in the Ferghana Valley. Not only did we watch artisans at work, learning about the shaping, firing, and painting process, we had a wonderful lunch in the studio’s shady courtyard, each course served on amazing pieces of pottery. As my stomach filled up, my will power drained; thankfully the plates I purchased made it home unscathed. –Amanda McKee 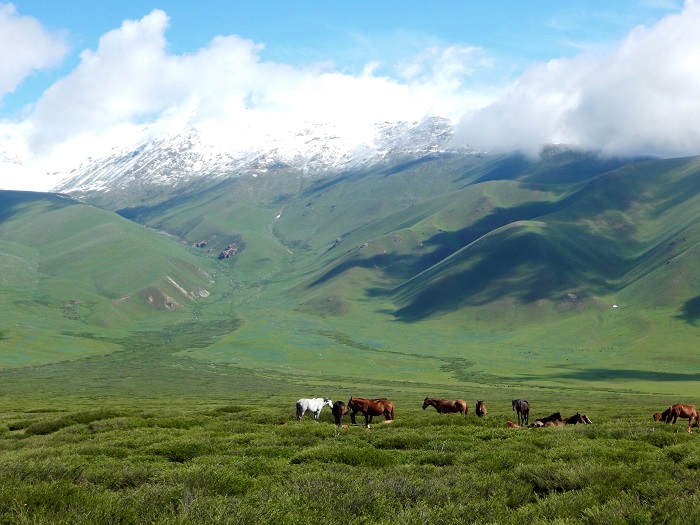 The highlight of my visit to Kyrgyzstan was the two-day drive from Osh to Bishkek. It was spectacular mountain scenery as far as the eye could see: snow, glaciers, green pastures, and wildflowers, horses, yurts, and local herders. What a change after the deserts of Uzbekistan. –Urs Hofmann

A Breathtaking Gem in Samarkand 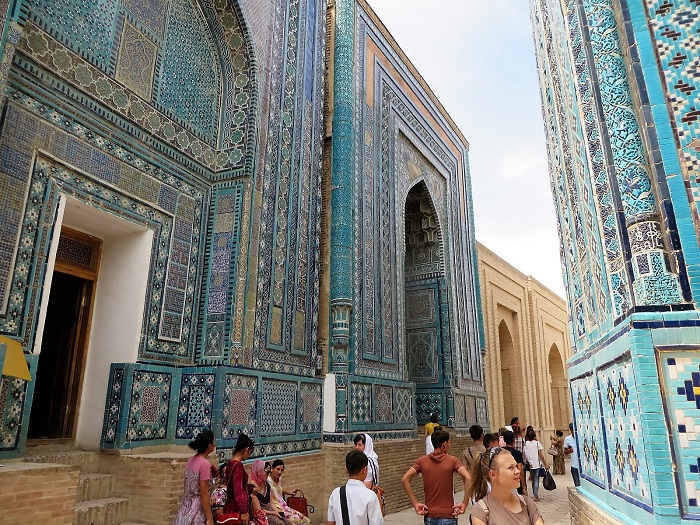 I’d known of the impressive architecture in Uzbekistan and I’d seen pictures of it…but nothing prepares you for the scope of some of these incredible structures. Shah-i-Zinda, a hillside funerary complex, literally took my breath away. I had no idea from the outside what lay beyond the wall, and upon climbing the stairs I was stunned by the majesty of it: intricate blue tile work as far upward as I could see. You can’t get a decent picture of the place—the alleys are narrow and there’s no angle that encapsulates the whole of the structure. You just have to be there to feel the true power of the place, to impress upon your memory the feeling, like walking through the halls of giants. –Errin Mixon 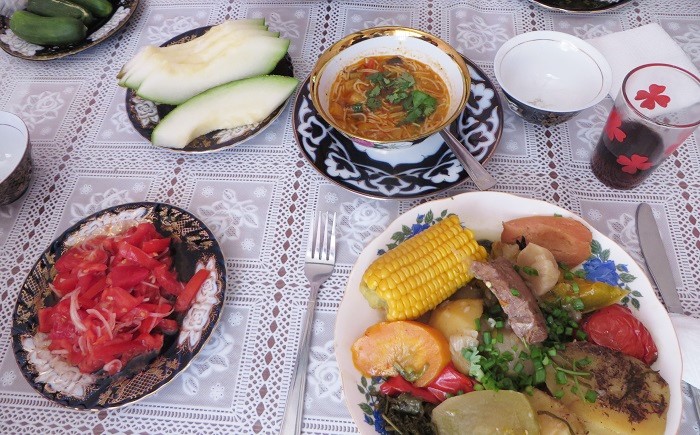 With relatively little tourist infrastructure in place across Central Asia, our best options for dining were often in local homes. It was heartwarming to be so generously welcomed right into people’s living rooms, dining rooms, and kitchens, getting a chance to see how they live—even what kind of toothbrushes and toothpaste they use! A Kyrgyz grandfather cooked the meal that’s pictured above for us and sat with us in the house that his family has lived in near the Uzbek border for three generations. With a Dungan family, we tasted Chinese-influenced dishes and learned about Dungan traditions (Dungans are Muslim people of Chinese origin). With another family, we tasted homemade preserves and found out more about the grandmother who’d started the women’s felt cooperative that we’d just visited. At a Uighur home in Karakol, we even helped roll the traditional noodles that went into our soup . –Amanda McKee 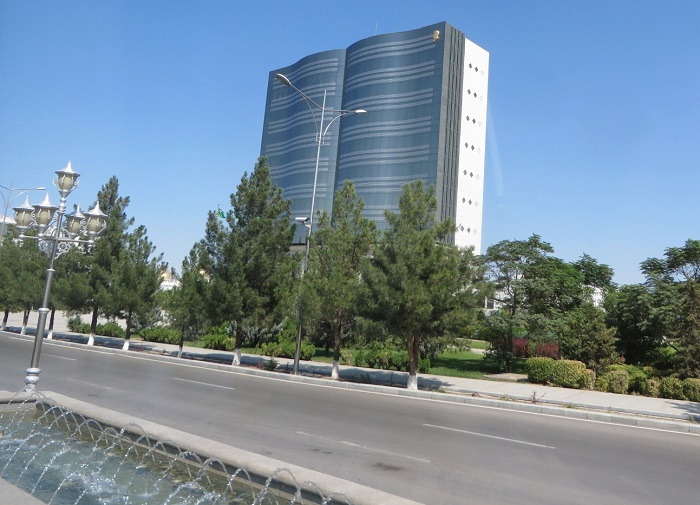 The architecture of new Ashgabat must be seen to be believed. It’s like Turkmenistan’s answer to Las Vegas—all neon lights and white-marble opulence, but silent and pristine. When night falls, the plethora of fountains and building outlines glow red and blue and green and purple amid deserted streets. To make it even more fantastical, many buildings are shaped to represent the industries they house. For instance, the press building (pictured above) looks like an open book, and the Ministry of Health like a syringe. The new international airport is even shaped like a flying falcon! –Errin Mixon 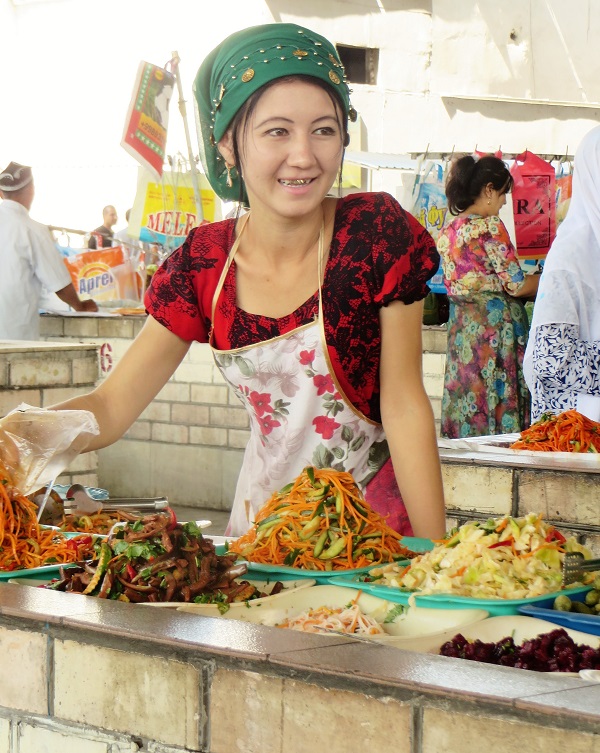 It was such fun to stroll through the lively markets, interacting with local folks and watching them interact with each other. Stalls were stacked high with beautiful breads, nougat of many flavors, fresh almonds, dried apricots and prunes, bright red chilies, lovely green bunches of dill and basil and cilantro, mountains of ripe tomatoes and bell peppers, piles of potatoes and onions and cabbages, honey on the comb, grains and beans, local grapes and strawberries, imported pineapple, stiff yogurt, soft cheese, home-brewed royal mulberry juice being sold in old Coke and Fanta bottles, even kim chi. One of the spice vendors at the Samarkand market, standing behind pyramids of fragrant cloves and cumin, asked, “Where from?” When I replied “The United States,” he looked puzzled, so I added, “America.” “Oh!” he said, smiling enthusiastically. “America! Barack Obama!” And offered us samples. At the Ferghana market, which sees very few tourists, some of the older women sellers, heads covered in scarves and gold teeth showing through mischievous grins, took a special interest in the younger women of our group. “Where you from?” they asked. “How old are you? Are you married? How many kids?” They seemed rather alarmed to find out that we were in our late 30s and single. –Amanda McKee 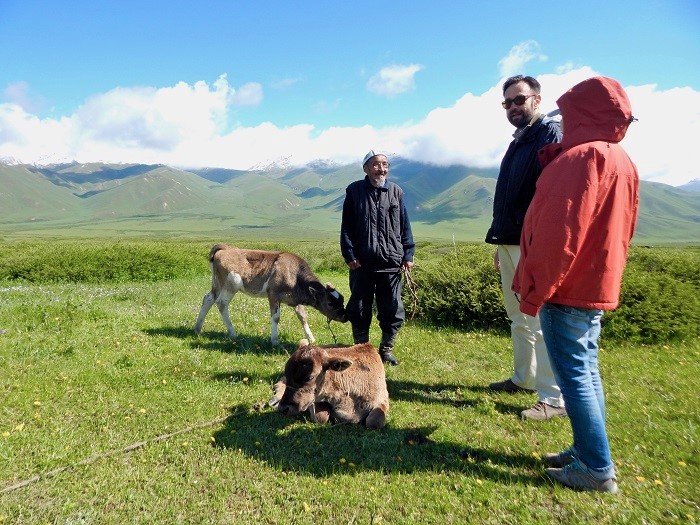 Driving through the Tien Shan Mountains was simply stunning. The verdant pastures were dotted with yurt encampments and horses, and the snowcapped mountain peaks surrounded us. We visited with a couple of calves resting in the grass. Before too long, a nomadic herder approached; he was curious as to why we were curious. He expressed the belief that we must not have cows where we came from—why else would we be so interested? With our guide, Dinara, as interpreter, we had a lovely conversation—an experience I won’t soon forget. –Glenn Ringer

If you’d like to see these incredible sights with your own eyes, ask about our Epic of Central Asia trip or our other Silk Road journeys.

Explore the US with Our Colleagues at Off the Beaten Path