Home » Wanderlust » Serendipity’s Sketchbook: Without a Plan in Pokhara

Serendipity’s Sketchbook: Without a Plan in Pokhara 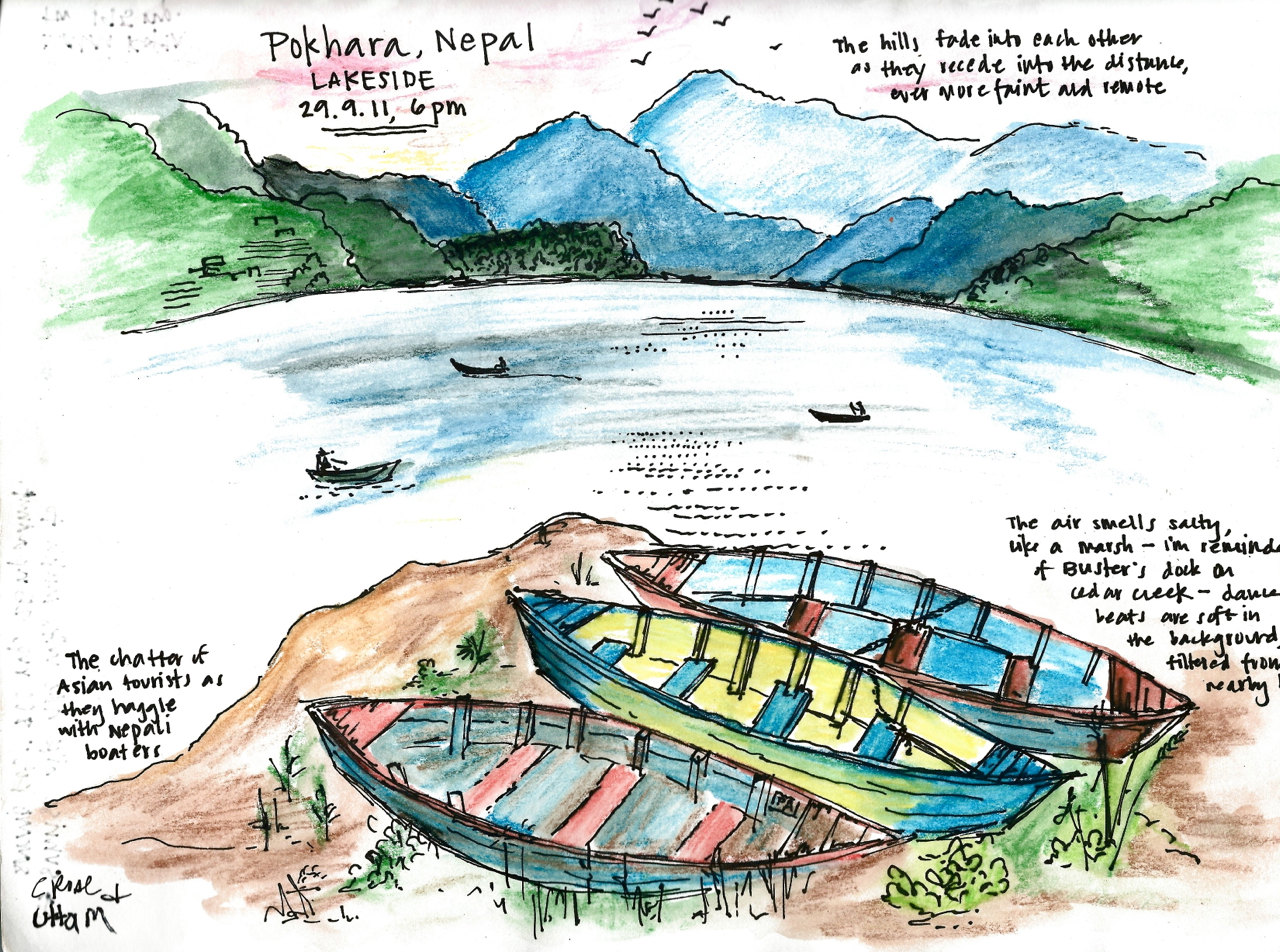 Candace Rose Rardon is an American writer, photographer and artist currently living in India. She sketches as she travels, and these sketches, combined with the stories behind them, charmingly capture those fleeting, layered moments that are the stepping stones of travel. Recce will be presenting her on-the-road sketches-and-stories — her sketchbook of serendipities — in the months to come.

I had never arrived in a new country with less of a plan.

Since I was spending four months in India, a visit to its northern neighbor, Nepal, seemed unquestionable – but when I arrived one September for a week, walking across the border at the dusty village of Sunauli, I was completely and utterly plan-less.

Twenty-four hours later, I found myself on the shores of Pokhara’s Phewa Lake at sunset. To my right, something white and bright caught my eye: two snow-capped tips of the Annapurna range, illuminated by a few last golden rays. And in front of me, layer upon layer of blue hills folded into themselves, surrounding the valley like the walls of a fortress.

There was an incredible stillness to the scene, a stillness I wasn’t quite comfortable with in my plan-less state. Rows of wooden boats lined the shore, brought to rest at the end of the day, water drying off their washed-out primary hues. Children perched on piles of stones, fishing rods suspended above the water, and I, too, found a seat, sketchbook centered on my lap.

“Nice picture,” a voice said behind me. I turned around to see a boy, dressed in a red t-shirt and dark green shorts. He told me that his name was Uttam, he was 14 years old and he lived about a 20-minute walk from town. I invited him to sit down next to me, and gave him a sheet of paper from my sketchbook and a pen to draw with.

We sat there together, Uttam and I, until the sky turned dark and the air cool. Before leaving, I asked if he would sign my sketch, just below my own name. Months later, I would read Peter Matthiessen’s The Snow Leopard and be challenged by his mountaintop epiphany – “I am here to be here” – coincidentally also penned in Nepal.

If I’d had such a revelation in Pokhara, I would have repeated it often: I am here in Pokhara to be here. I am here to have my first glimpse of the Himalayas. I am here to meet a young boy named Uttam.

And maybe that was the only plan I needed.