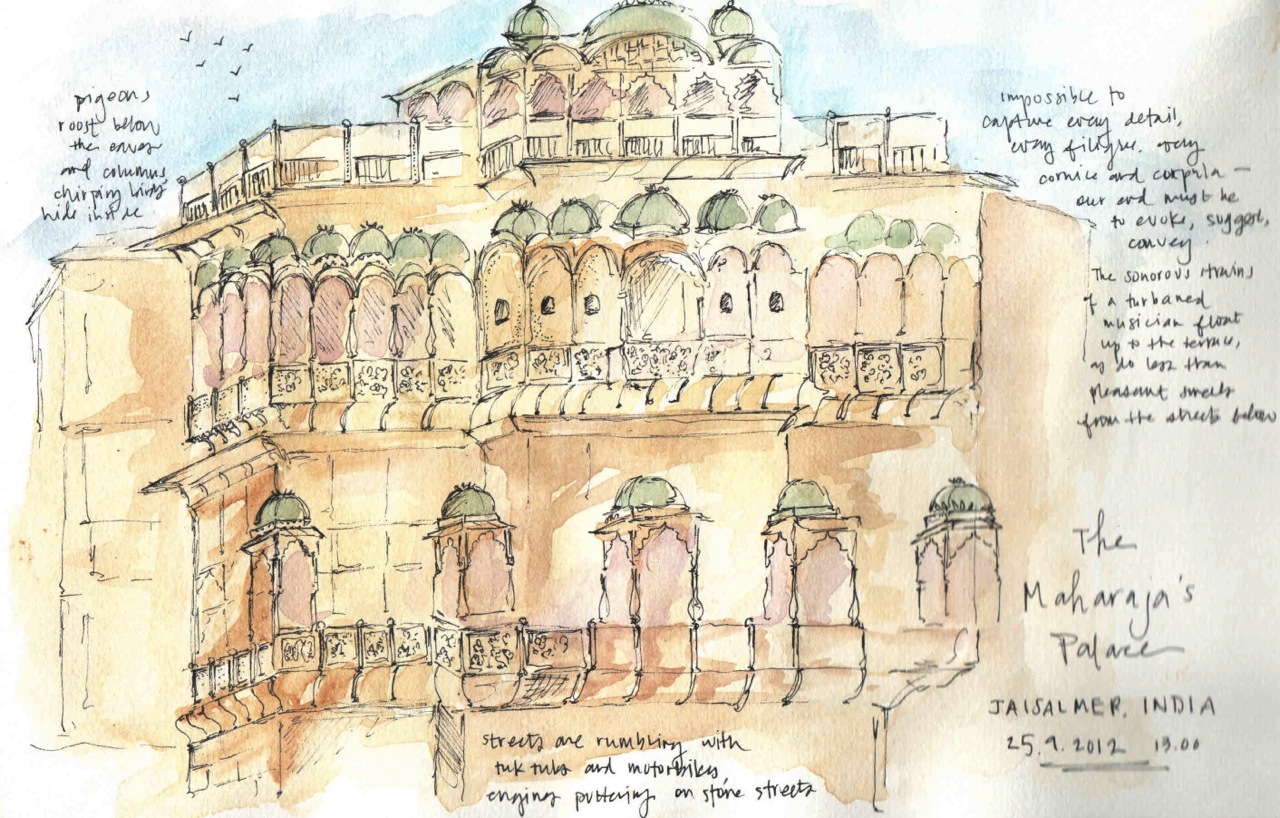 Candace Rose Rardon is an American writer, photographer and artist currently living in India. She sketches as she travels, and these sketches, combined with the stories behind them, charmingly capture those fleeting, layered moments that are the stepping stones of travel. Recce will be presenting her on-the-road sketches-and-stories — her sketchbook of serendipities — in the months to come.

There are a few things this sketch shows: the palace’s intricate cupolas and balustrades, nearly impossible to capture in full detail on paper; the pigeons perching like hideaways among the eaves; and the monochromatic shade of gold that cloaks all of Jaisalmer’s hilltop fort, positioned at the far western edge of India in the Thar Desert.

But what it doesn’t show is my own perch on the terrace of 8 July Café, overlooking one of the fort’s main squares. It doesn’t show how the red-and-white umbrella above my table fails to shade my fresh lime soda from the heat, and the heavy drops of condensation subsequently sliding down the side of my glass.

And it doesn’t show my new friend Sylvie sitting across from me, her nose ring glinting, her bright brown eyes hidden behind John Lennon-style shades as she tells me about the word she and a friend once invented.

“Fantability. Like when something’s halfway between a fantasy and a possibility.”

I met Sylvie only two weeks before on the other side of the country, in the old hill station of Shillong. We were both there for something called the Rickshaw Run, an unsupported adventure that sends participants journeying 2,000 miles across India in three-wheeled auto-rickshaws. Sylvie was there to take part in the run with her boyfriend Nick; I was there to photograph and write about them doing so.

And so the very fact that both of us are sitting here now, alternately basking and baking beneath the desert sun, seems like its own kind of fantability – that Sylvie and Nick should complete such a journey, that I should find myself working for the trip’s organizers, and that our intersecting paths should allow our connection.

There are a few things this sketch shows – and I’m grateful for the fantability of life leading us to Jaisalmer that gave me the chance to show them.

Candace Rose Rardon is a travel writer, photographer, and sketch artist with a passion for documenting the world. She recently completed a Masters in Travel Writing from London’s Kingston University. Visit her website at http://www.candaceroserardon.com/.