Home » Wanderlust » Postcards from the Himalaya

Postcards from the Himalaya 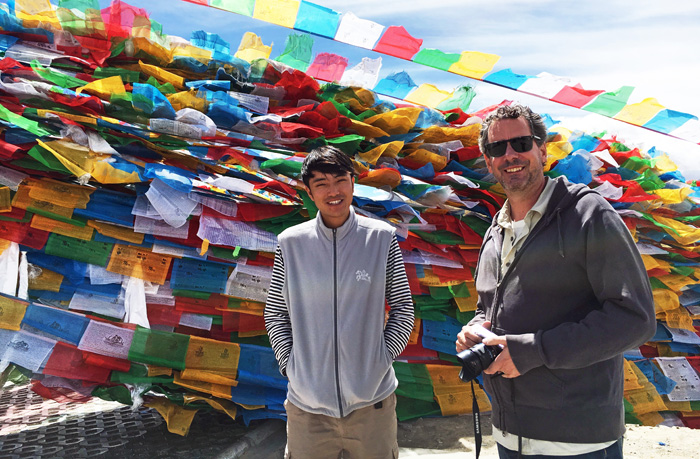 Mount Everest. The Potala Palace. Kathmandu. These are the legendary places I’ve dreamed of seeing most of my adult life and finally did on my recent scouting trip in Tibet and Nepal. Here are some of my favorite moments from my journey.

Not Your Typical Palace 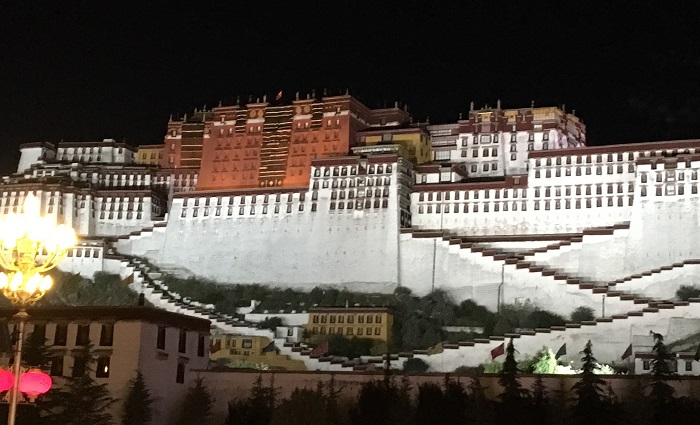 The Potala Palace, located about 12,300 feet above sea level in the Tibetan capital of Lhasa, was the main residence of the Dalai Lama until 1959. Not a palace in the opulent way of European palaces, but rather a classic dzong (or fortress), like the ones in Bhutan. It reminded us more of a castle than a palace. Statues of Buddha, murals, and antiques that are centuries old, along with other incredible works of art, grace every area of this mountaintop palace.

The general structure of the Potala is in two parts: the Red Palace and the White Palace. Used as a house of prayer by the Dalai Lama, the Red Palace was dedicated to the study of Buddhism and the advancement of the religion. Housed within are chapels and several spectacular mausoleums of previous Dalai Lamas. The White Palace was home to 10 successive Dalai Lamas and their courts, and currently houses the offices of the Tibetan government.

A Gathering of Pilgrims 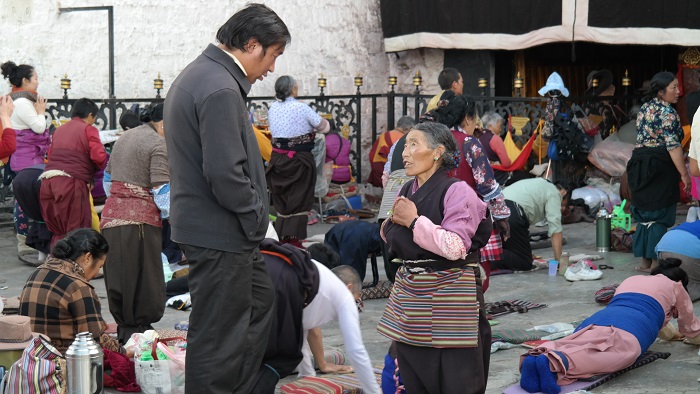 Pilgrims come from all over Asia to perform the Kora (a walking meditation and pilgrimage) around the Barkhor in Lhasa. The Barkhor is a bustling street that circles the Jokhang Temple, Lhasa’s main Buddhist temple. We walked among local women wearing traditional, striped aprons, men in broad-brimmed hats, and pilgrims from eastern Tibet in their knotted red headdresses, most carrying small prayer wheels. Many were prostrating themselves around the Barkhor and in front of the Jokhang Temple, a gesture to show reverence to the Buddha and his teachings. We went inside the temple, filled with ancient altars and air thick with burning incense and butter lamps, to find people praying and visiting. 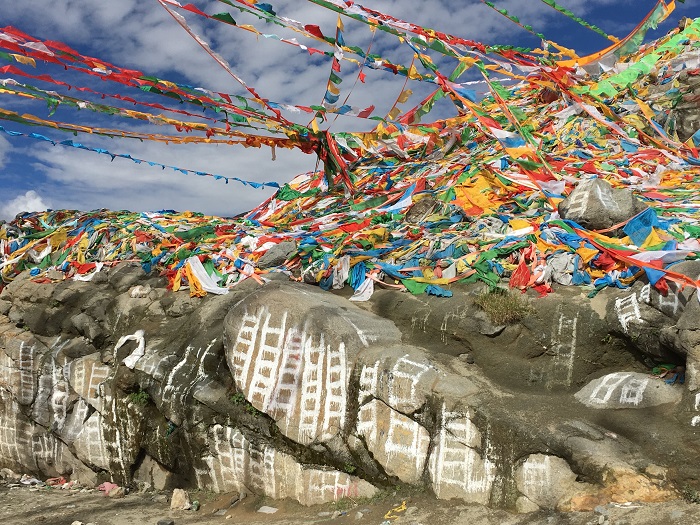 Prayer flags adorn mountain passes all over the Himalaya. At this one on the road from Lhasa to Drak Yerpa Monastery, ladders had been painted on rocks for a recent festival to help Buddha descend from the heavens. 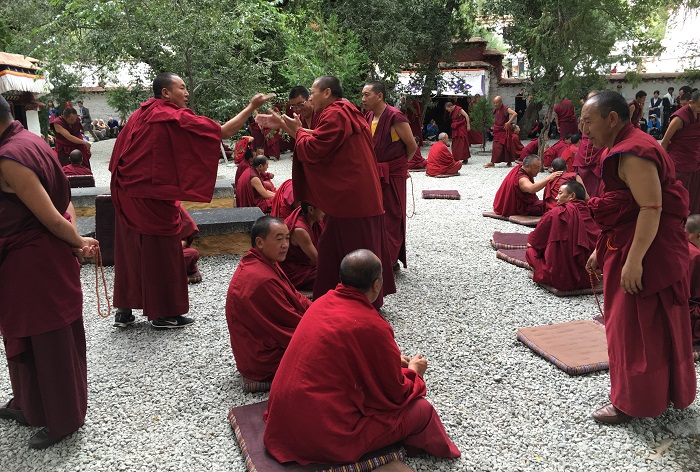 Debating monks are the main attraction at Sera Monastery, one of the main university monasteries in Tibet. To better understand Buddhist philosophy, they debate the Buddhist doctrines with great vigor and intensity, clapping their hands and sweeping their arms to give dramatic emphasis to their points. We arrived to witness this remarkable yet commonplace event in the “Debating Courtyard” of the monastery, and it was fascinating to experience this genuine expression of their ancient tradition, still surviving amid Tibet’s struggles. 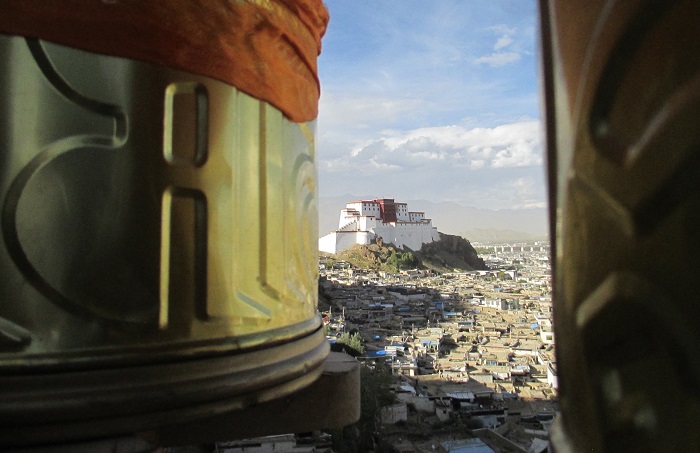 Most people don’t realize that a “mini Potala Palace” resides on a hilltop in Shigatse, Tibet’s second-largest city. The Shigatse Dzong was constructed in the 17th century as a prototype of the Potala, then destroyed during the Chinese Cultural Revolution in 1961, and reconstructed in 2007. This look-alike (now a museum for Tibetan culture) rises like a jewel over the old town, which we explored on a Kora around the city’s main monastery. It felt wonderful walking alongside the Tibetans — maybe locals, maybe pilgrims — performing their rituals under the brilliant afternoon sun and spinning the hundreds of prayer wheels that line the route. 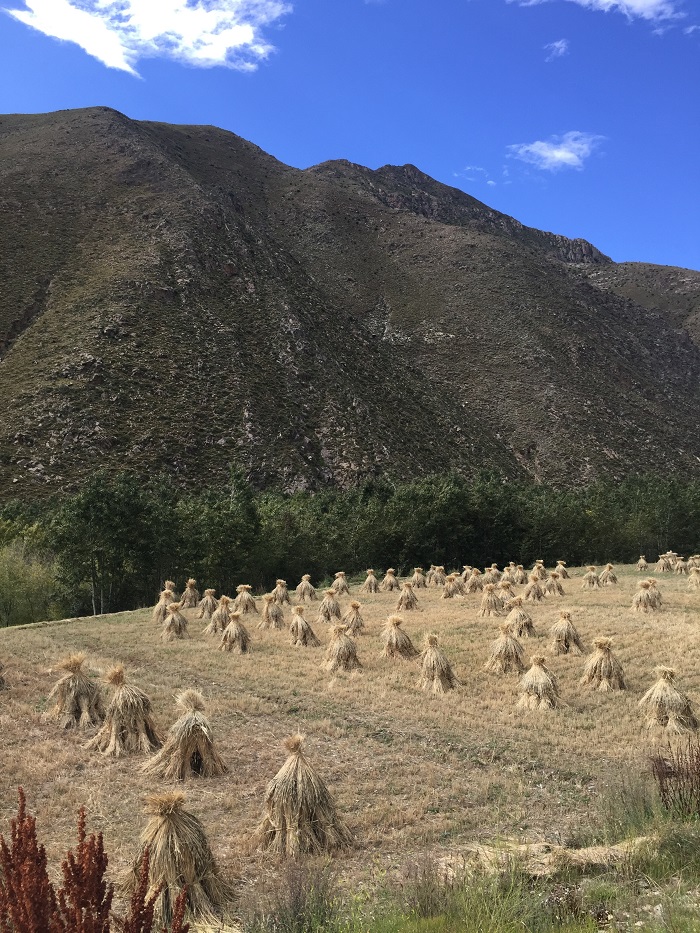 Tsampa (barley) is the primary crop of the Tibetan plateau and is used to make flour, noodles, and beer. Here it has just been harvested near Lhasa. 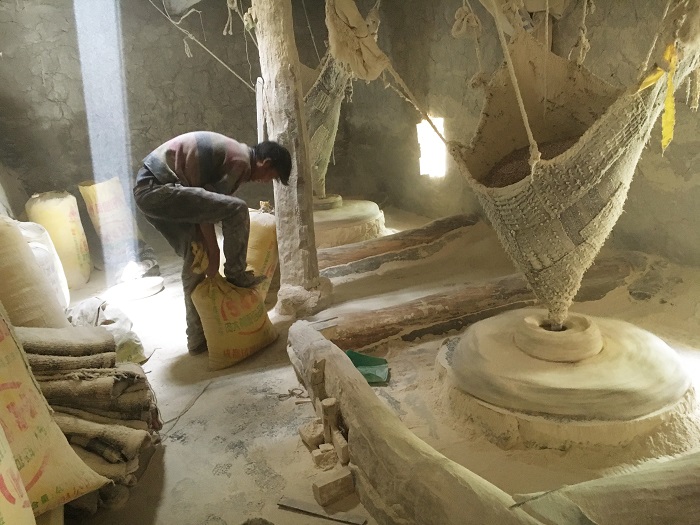 We visited a water mill where barley was being ground into flour. Farmers from all over the region come here to drop off their grains for milling, and in the fall and winter the mill typically runs 24 hours a day. 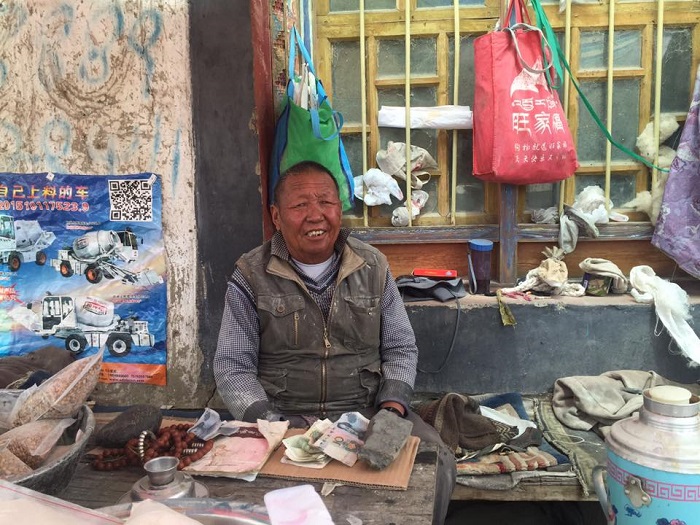 We met the owner of the mill, who shared some his homemade barley wine with us. It has a low alcohol content and is drunk widely all over Tibet as many believe it prevents diseases. Poured from a plastic jug, it tasted rather tangy.

Everest: Up Close, In Person

We got this stunning view of Mount Everest as we were driving from Shegar to Everest Base Camp. At an earlier mountain pass, which offers unbelievable views of the peak and surrounding mountains in clear weather, we hadn’t been so lucky: it was completely socked in when we got there. We continued on the windy road, fingers crossed, and as we rounded yet another corner, all of a sudden Everest was right in front of us in all its glory. There were audible gasps and screeching tires. Two hours later, the mountain had vanished again into the clouds. We were grateful for our wonderful views. 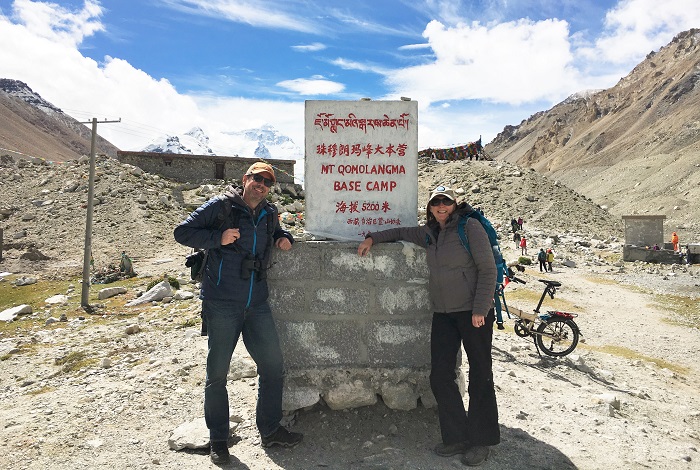 Here we are standing at 17,000 feet at the marker for Everest Base Camp, feeling elated and deprived of oxygen. This area is accessible to all travelers, but climbers attempting Everest have a separate base camp in a restricted area below this viewpoint, closer to the Rongbuk glacier. Spring is the main climbing season.

A Different Kind of Rush Hour 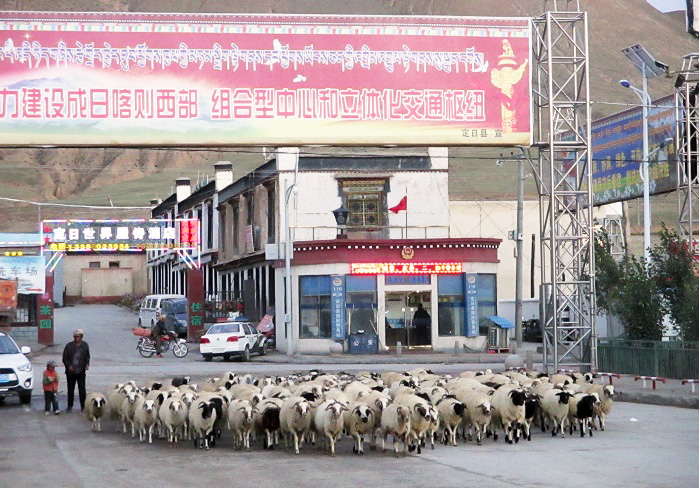 Sheep-herding hour in Shegar, the frontier-like town that is the gateway to Everest Base Camp. We stayed here two nights. Accommodations are on the rustic side, but comfortable. When taking a walk through town at dusk, we encountered this flock returning from their pastures. 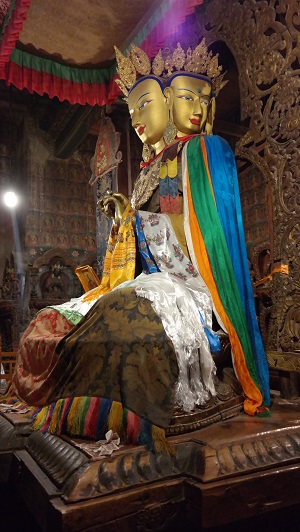 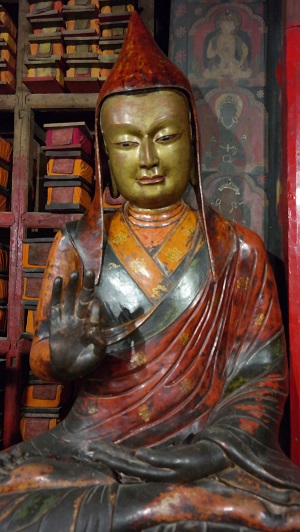 These photos were taken inside the Palcho Monastery, a complex that includes the famed Kumbum in Gyantse. It’s one of the few monasteries in Tibet that allows photography inside (for a fee). Up until now, I’d enjoyed the peace of simply looking at the beautifully adorned interiors, but I was happy to have this opportunity to bring home some digital reminders. 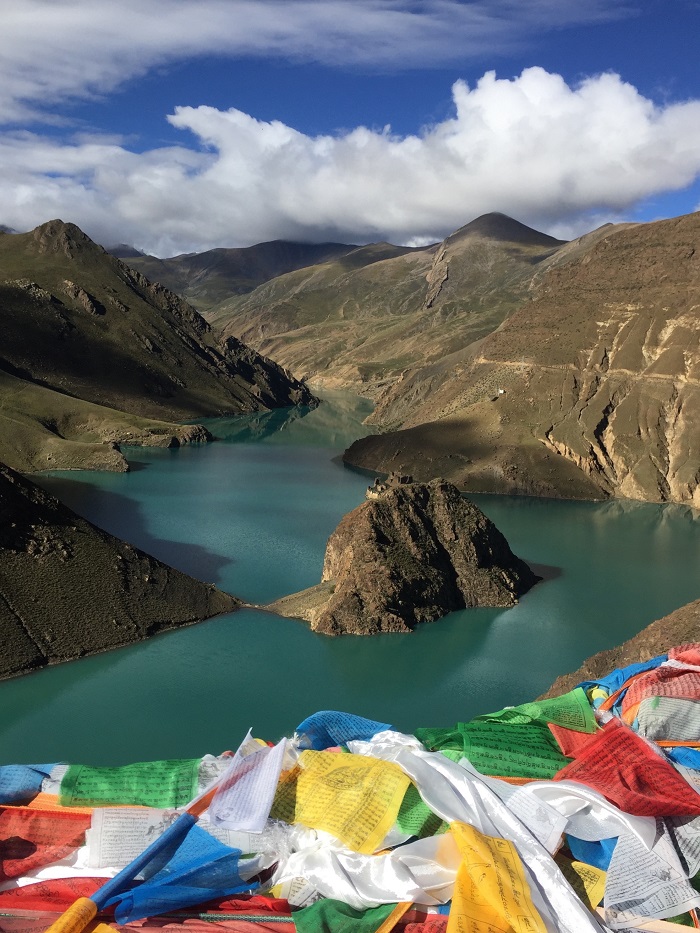 The road between Gyantse and Lhasa is spectacularly scenic as you pass many turquoise lakes like this one. 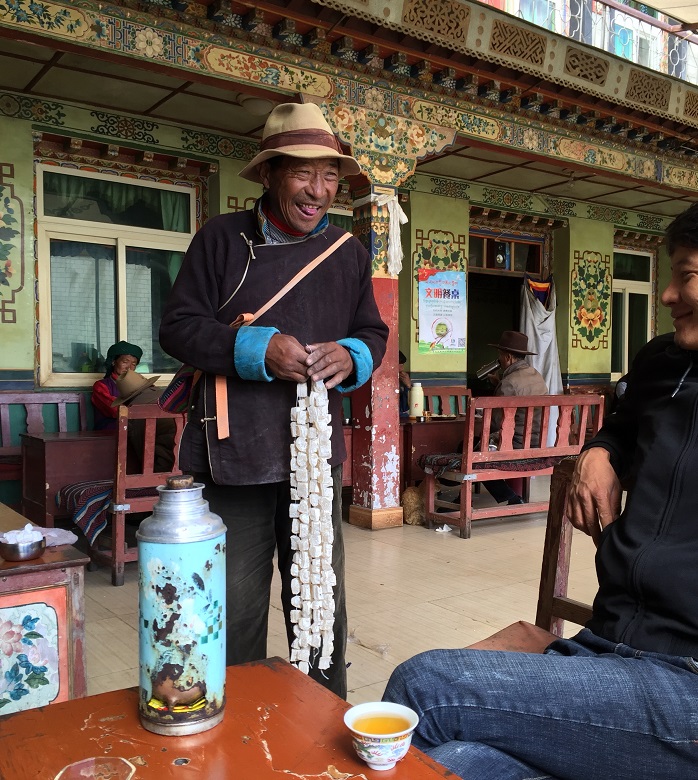 At a restaurant where we’d stopped for lunch, this fellow came by to sell us his dried yak cheese. Unfortunately for him, our guides had already stocked up a few miles earlier! Made from yak milk, dried and roasted over a fire, it is hard as rock and takes a bit of chewing before you can ingest it, but the flavor is surprisingly mild. 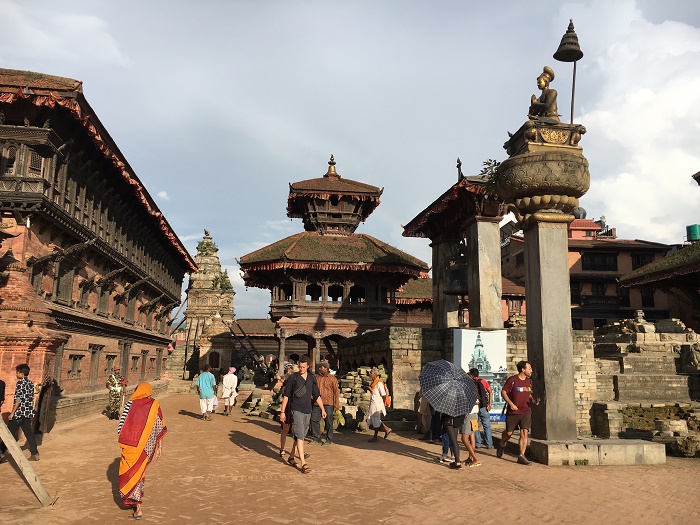 As soon as we arrived in Kathmandu, Nepal, we felt a very different vibe from Lhasa. While Lhasa can feel a bit restrained and formal, Kathmandu is lively and vibrant. Earthquake damage is still visible — many structures are being supported by long poles and rebuilding efforts still have a long way to go — but people are living life fully, out in the streets, filling stores. It’s wonderful to walk the streets and squares of Kathmandu and nearby Patan and Bhaktapur.

Everest from the Air 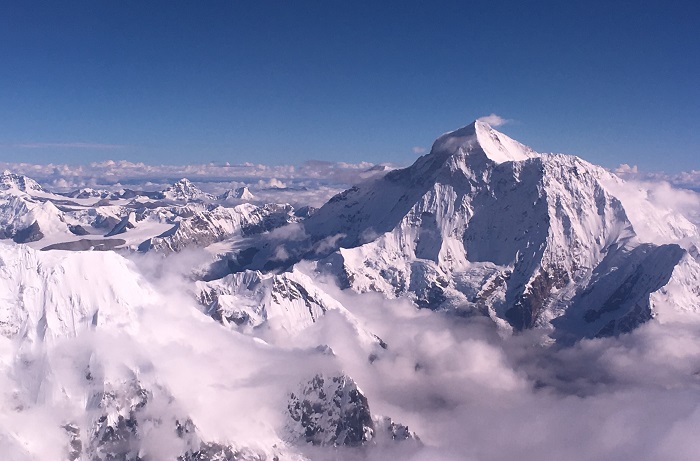 We took an early-morning scenic flight from Kathmandu to see our old friend Mount Everest — and got lucky with clear skies. Importantly, our contacts in Kathmandu knew which seats had the best sight lines (the passengers with wings blocking their views were not very happy).

A Room with a View: Annapurna 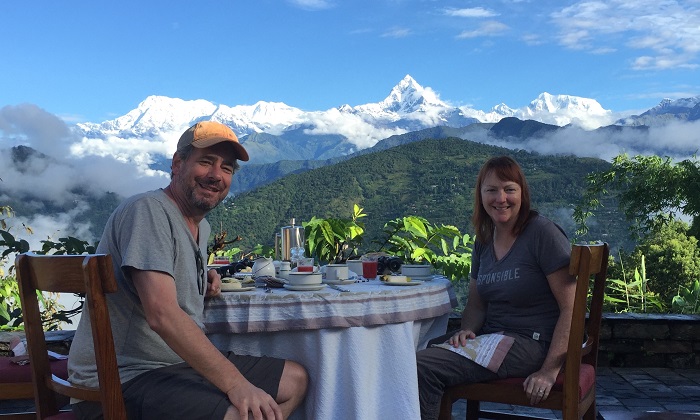 We stayed at an incredible mountain lodge outside of Pokhara that offers spectacular views of the Annapurna range. Weather changes quickly up here, and the clearest time is often in the early morning. So, if you’re amenable, the staff will wake you up at 5:30 a.m. if it’s clear so you can soak in the vista over breakfast.

Edwin d’Haens, GeoEx’s Director for Asia, will gladly tell you more about his journey and help you arrange your own group or custom trip in Tibet and Nepal (as well as Bhutan).