Oranges and Openness on Shodoshima Island 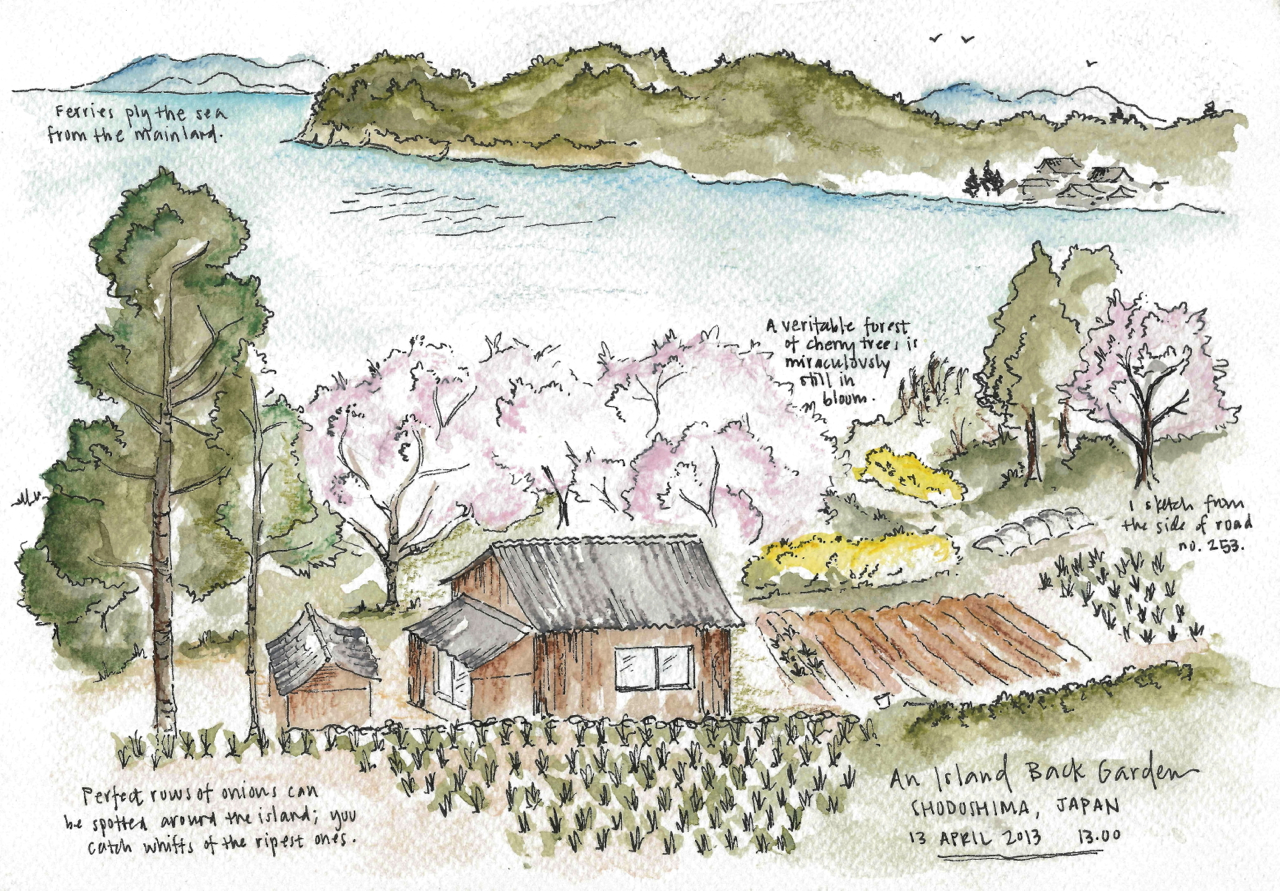 Candace Rose Rardon is an American writer, photographer and artist who recently returned to the United States after ten months living and traveling in Asia. She sketches as she travels, and these sketches, combined with the stories behind them, charmingly capture those fleeting, layered moments that are the stepping stones of travel. Recce will be presenting her on-the-road sketches-and-stories — her sketchbook of serendipities — in the months to come.

SHODOSHIMA, JAPAN — I have only begun to round a curve on the west coast of Shodoshima when he walks towards me – a workman whose name I’ll learn is Sakamoto-san, a printed scarf tied several times around his neck, almost touching his well-groomed, gray-haired beard.

As soon as he’d seen my pilgrim’s white kimono jacket, he’d gone straight to the passenger seat of his little blue work van. Now he approaches, right arm extended with a single orange in his hand. I can’t help wondering if he is giving me part of his lunch, or if he keeps a bag of them on hand for such occasions.

The orange is what is known as o-settai, Japanese for “welcome” or “reception,” and is customarily given to pilgrims as an act of service; sometimes it’s a small gift of food, other times a sweet-smelling sachet or pin. It isn’t my first o-settai on the trail, but something about the spontaneity and simplicity of his gesture moves me the most.

Sakamoto-san drives away immediately after depositing the orange in my hands, but I linger on the road. Before me is a simple island back garden: two tin-roofed wooden buildings, cherry trees still in bloom, and neat rows of onion patches – ubiquitous around Shodoshima. So elegant does this pastoral scene strike me that I sit right along the highway, just on the other side of the guardrail, to sketch it.

Later, after I resume walking, I pass the driveway and notice a sign hung out front – “Yasuke Park,” it reads in English. “Wellcome!! Free.”

What I’d taken to be someone’s private backyard is actually open to the public. This incredible openness – for the smallest of gardens to welcome visitors, for a man to stop what he is doing to give a pilgrim an orange – has overwhelmed me again and again on this path.

I peel and sink my teeth into Sakamato-san’s gift as I walk – an orange never tasted so sweet.