Home » Wanderlust » On the River 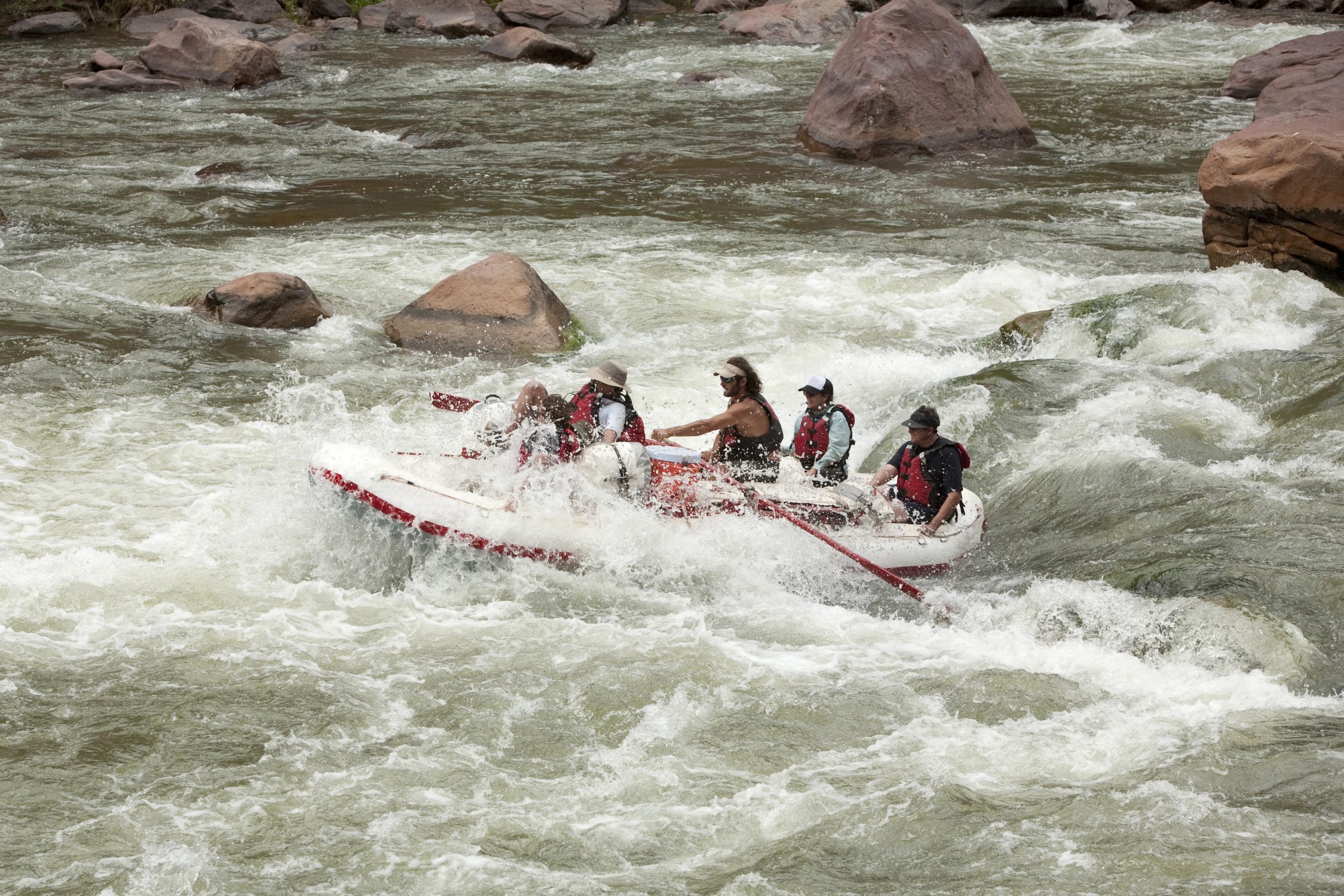 Puffed up in mango-tango-colored life vests, the six of us were separate people to start, but on the river, we became one, surging over whirling eddies and jerking into sharp currents, holding tightly to the inflated walls of the raft, issuing quakes of laughter between trembles of fear as we roared down the Colorado. I was sixteen, and consumed by the rapids. I thought the river was in charge. Until I noticed Grandpa wasn’t holding on at all.

At the time, I thought of my grandfather simply as an old man. He would go walking at 5 am to beat the Arizona summer stifle. Or maybe it was to beat my grandmother out of bed in the morning. She was said to have the sharpest tongue in the West. She could be so mean that you could hear The Good, The Bad and The Ugly theme song whistling in the background whenever she walked into the room. So before the days became long and crispy, he’d go golfing with other friendly, leathery lepers, and later hide out in the cool of the den, doing his petit point under a large magnifying glass. He had great humor, but he was just… old. Until the summer we traveled to Keystone, Colorado, and he became my hero.

The trip started badly. Over tuna fish sandwiches with far too much sweet relish, Grandma asked me about church. Raised by a father who prayed only to gods the likes of George Lucas and Isaac Asimov, I had different beliefs. I should not have said a word. Afterward, I was left a teary pulp of a pup for my grandfather’s rescue. He took me out to Keystone Lake to sit silently on a bench and ponder the ducks rippling the water.

Grandpa was good at being quiet. I suppose he had learned his lesson. While I hiccupped, kicking up dirt, he told me about Grandma. He told me of her Baptist orphanage upbringing, and what she had endured with her family before that. Even though he had been the target of many attacks for decades, he defended her.

I think it was that afternoon that I began to admire my grandfather. But it wasn’t until our whitewater rafting adventure that the sentiment became real.

He had already survived two heart attacks; naturally, quasi-extreme sports were not a good idea. But he insisted. Even though we were beginners, Grandpa refused to do the easy excursions. He told the guide he wasn’t worried for me: I was a competitive swimmer, he said. We were strong and agile, he said. I’m still not sure he ever told the truth about his age.

Roaring past evergreen pines pointing skyward toward the great blue, the river tumbled over boulders, whipped through short falls, and rolled through white waters, again, and again. With the guide at the helm and one other strong, adept paddler at his side, I squatted, perching on the sidewall of the raft, clutching to whatever I could, forgetting my paddle completely.

As I laughed and I shrieked, I saw something I’ll never forget, something even more impressive than the roiling waters and the slick, scary boulders: Grandpa. As calm as Keystone Lake, he sat in the back of the raft and bailed, tirelessly. He never whooped or winced, but simply did his strong man duty, until our run ended in a still pool.

I would tell that story to friends for years after that. Because that was the first time I learned that bravery comes in many different ages, shapes, and situations, that it can appear unexpectedly in an old man in a raft on the Colorado – and on the whitewater rapids of life.

GeoEx offers rafting adventures on its journeys in Costa Rica and Peru.