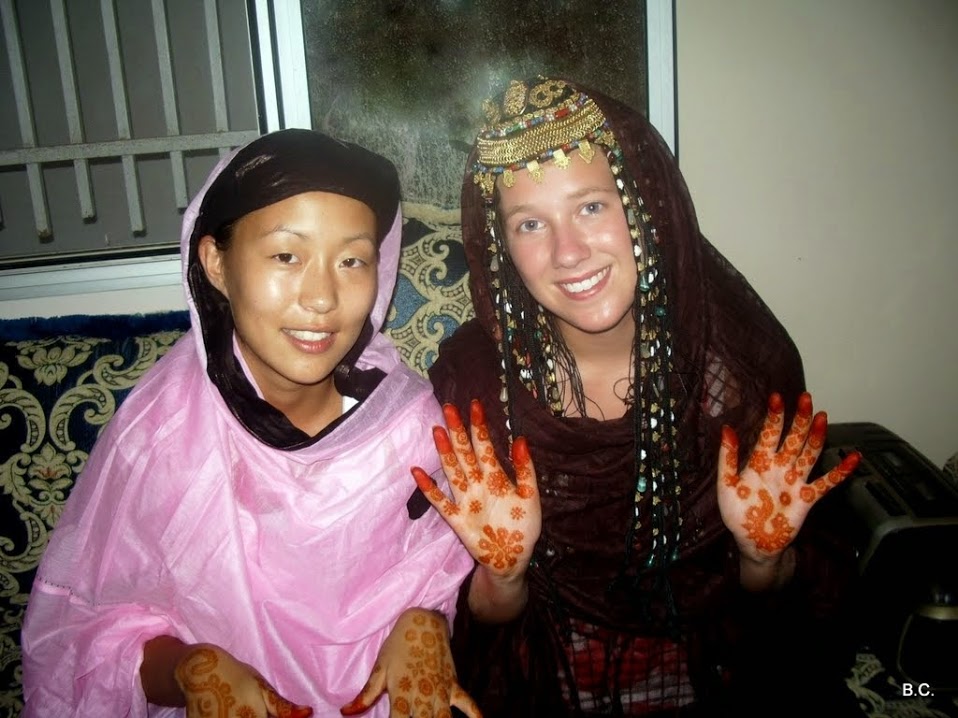 Editor’s note: Among the many pleasures of travel are those serendipitous encounters that expand our worlds in ways that we never expected – as in the wonderful tale that follows.

A trip that begins with throwing banana up on oneself and the surrounding passengers in a crowded minibus is surely destined to be horrible. But sometimes, I’ve learned, the worst beginnings make for the best trips.  My week living with a Mauritanian family during Ramadan was one of those times.

A classmate and I were studying in Dakar, Senegal, and wanted to do something unforgettable for our first term break.  A trip to the Sahara Desert for close encounters with sand dunes, camels, and ghost towns seemed to fit the bill.

But the banana incident, on the way to the Mauritanian border, marked only the beginning of a series of back-to-back, ill-fated events. Our wallets and cameras disappeared somewhere between the seedy border town and the crammed pirogue ride across the river.  And by the time the Peugeot taxi that seats seven in Senegal but nine just across the border dropped us off in the capital of Nouakchott, we were nursing incapacitating cases of heat stroke.  The Sahara Desert had ruined our plans before we’d even truly stepped foot in it.

“Where are you girls headed?” a deep voice asked, in poetic North African French.  We turned, scanning the crowd for the questioner, and glimpsed a pair of big brown eyes staring at us in bemusement.

This was a loaded question – without a dollar between us, we didn’t really know.

“Look.” The man pointed to a familiar yellow stain on his shirt.  Banana.  He smiled.  “I was on the minibus.  Come.”

We looked up again into those big brown eyes, the only thing we could see clearly in the intense reverberation of Sahara sun on Sahara sand.  Were those eyes trustworthy?  Was this man our travel-savior?

I don’t remember much about the next twenty-four hours, save the thin foam mattresses laid in the center of a sparsely furnished room, the intricate Persian rug that took up the entire floor, and the built-in seating outlining the circumference of the room.  A small television blared “The Jackal” – dubbed in Arabic – in the corner, and on the next mattress over, Mohammed giggled intermittently.

“They’re awake!” he cried, when he spied me spying him.  Moments later, the bumping sounds of shuffling, scurrying feet brought a crowd of people into the room.  The children came first – tiny-framed, with curly brown hair, and wearing sun dresses and t-shirts.  Next came several men – scruffy-haired and big-bellied, wearing long, loose-fitting boubous made of glimmering white fabric and bordered with gold stitching.  Last came the women – covered from head to toe in bright mulafas, pale faces exposed.

Twelve sets of big brown eyes stared at us with utmost curiosity.

Dazed, I accepted the glass and began to drink, brown eyes still upon me.  The milk tasted warm and acidic, and I discerned small chunks floating around in the liquid.

“Would you like some?” I offered, feigning generosity but really trying to pawn off the stomach-churning drink.

“No, thank you.  It’s Ramadan.  We cannot eat or drink until sundown.”

Oh.  That would explain the comatose silence in the home and my resulting long slumber.  I gulped down my chunky milk in one swift mouthful, and my hosts smiled.

One of the women caught my eye.  Wordlessly, she beckoned her two guests to follow her into another room, identical in design and furniture, if not size, to ours.  She rummaged in her wardrobe, pulling out boxes and bags, before locating what she sought.

“Hamna,” she gestured.  Here.  She placed a parcel in each of our hands, as though she’d been expecting our arrival.  Inside were mulafas, mine a large yellow and pink robe of thin, rough fabric.  She helped us fold ourselves into the material and paraded us around the house for a Mauritanian fashion show.

“You are now dressed for our feast.  Let us break fast,” announced Mohammed, our apparent translator.

We were led into another room, set apart only by the long, low table centered over the elaborately woven carpet.  I was handed another cup of thick camel’s milk, and a date.

“The date is lucky.  It’s what the Prophet – peace be upon him – used to eat to break his fast.”  I popped the date into my mouth, vaguely wishing for the return of my luck, which seemed to have exited me with my banana.

An elaborately decorated gas canister was brought into the room.  On a metal tray came a silver teapot and several kass, glasses the size of shot tumblers.  Mohammed was to brew the first cup of attaya.  He crammed loose tea leaves into the pot – especially small for so many people – and then added sugar and mint leaves.  Once the liquid was hot, he poured some tea into a kass and began to decant it into another, the back and forth motion of his arms moving the glasses further and further apart.

“This aerates the tea and creates a delicious light foam that tops each cup,” he explained as we stared at him in wonder.

That first tiny glass of tea was strong and bitter, but it woke everyone up and we all slurped in approval.  Now the feast could begin.  Food was carted in on silver plates in an impressively long procession.  Pilaf, crepes, vegetables, kebabs, stews, camel meat – all smelling delectably of Arabic spices.  I dug in, famished from my own unintentional fast.

When the men began to burp their appreciations and lay back on the rug, distended stomachs toward the air, desserts of fresh and dried fruit, pistachios and yogurt were brought out.  Mohammed began to prepare a second round of attaya, adding water, sugar and mint to the already brewed tea leaves.

“The first round of attaya is the strongest.  Each round thereafter becomes sweeter and weaker.”

There were twelve rounds of attaya that evening.  The caffeine countered the drowsing effects of the heavy meal and everyone was awake until late into the night.  Some of the men would eat and drink until sunrise the next morning, but my hands were shaking from the caffeine and my stomach had never been so bloated, and I fell appreciatively onto my thin foam.

The next week passed like the blur of a Saharan sandstorm.  Each day, the oppressive heat sucked us all into coma-like states, and each evening we came alive as we broke fast at different relatives’ homes, munching on lucky dates and drinking attaya into the wee hours of the morning.

Despite Ramadan-induced fatigue and thirst, our impromptu hosts became our self-appointed tour guides.  They took us to visit the city beach, where the desert dunes meet the ocean waves.  They took us into the sprawling covered market, showing us off at the stalls of every relative and friend.  They took us to the edge of the Sahara to climb sand dunes tall enough to afford us views of endless sand beyond.  And they took us on a covert nighttime mission to visit camels, tied up in a stranger’s yard for the night.

Suddenly it was our last evening before we had to return to Dakar and school.  Our Mauritanian host family had something special planned.

“Tonight, you get married!” announced Mohammed with evident glee.

My friend and I barely had time to exchange worried glances before we were whisked into yet another nearly identical room.  The men left us alone with only the women and children – and, it appeared, our wedding stylist.

A petite, dark woman, with a thick coating of kholl around her eyes, came forward.  “Henna,” she said simply, and grabbed my hand.  As we sat on the rug in the middle of the room, surrounded by the excited Arabic chatter of the women, the wedding stylist scrolled a deep, smelly liquid onto my hands.  She moved quickly, deftly reproducing patterns she’d evidently painted a thousand times before.  She smeared globs of henna onto my fingernails and toenails, and when she was done, I was ordered to sit immobile with my limbs spread out like a cross.

When the dye was finally wiped off, we were dressed in black gowns with ornate golden tiaras.  Farouk – Mohammed’s aunt, and the lady who had given us the mulafas on our first evening – made the universal gesture for “photo.”  It was then that we realized no grooms were coming, and that this was a mere Mauritanian dress-up game.  We breathed a sigh of relief and smiled for the camera.

We joined the table and the now-familiar ritual of breaking fast still dressed in our wedding gear.

“Here is your date, although you appear not to need the luck,” he said, alluding to our physical appearance.

And that’s when it hit me.  How right he was – that I didn’t need the date at all, for I was already blessed with incredibly good luck.

How else could I explain the treasure-trove of memories our Mauritanian host family had allowed us to gather?

Mohammed was right.  I didn’t need a lucky date.  I already had one – him.

For Brittany Caumette, what started as an innocuous study abroad trip to Senegal turned into a decade-long love affair with travel.  From volunteering in Nepal to living on a farm in Zimbabwe; from motorcycling through India to jet-setting across Europe; and from backpacking across Southeast  Asia to camping her way through Africa, Brittany shares her travels on her website, Wandering Footsteps.  Currently two years into an around-the-world trip in a Toyota-cum-camper van, she isn’t likely to run out of travel stories (or photos) any time soon!