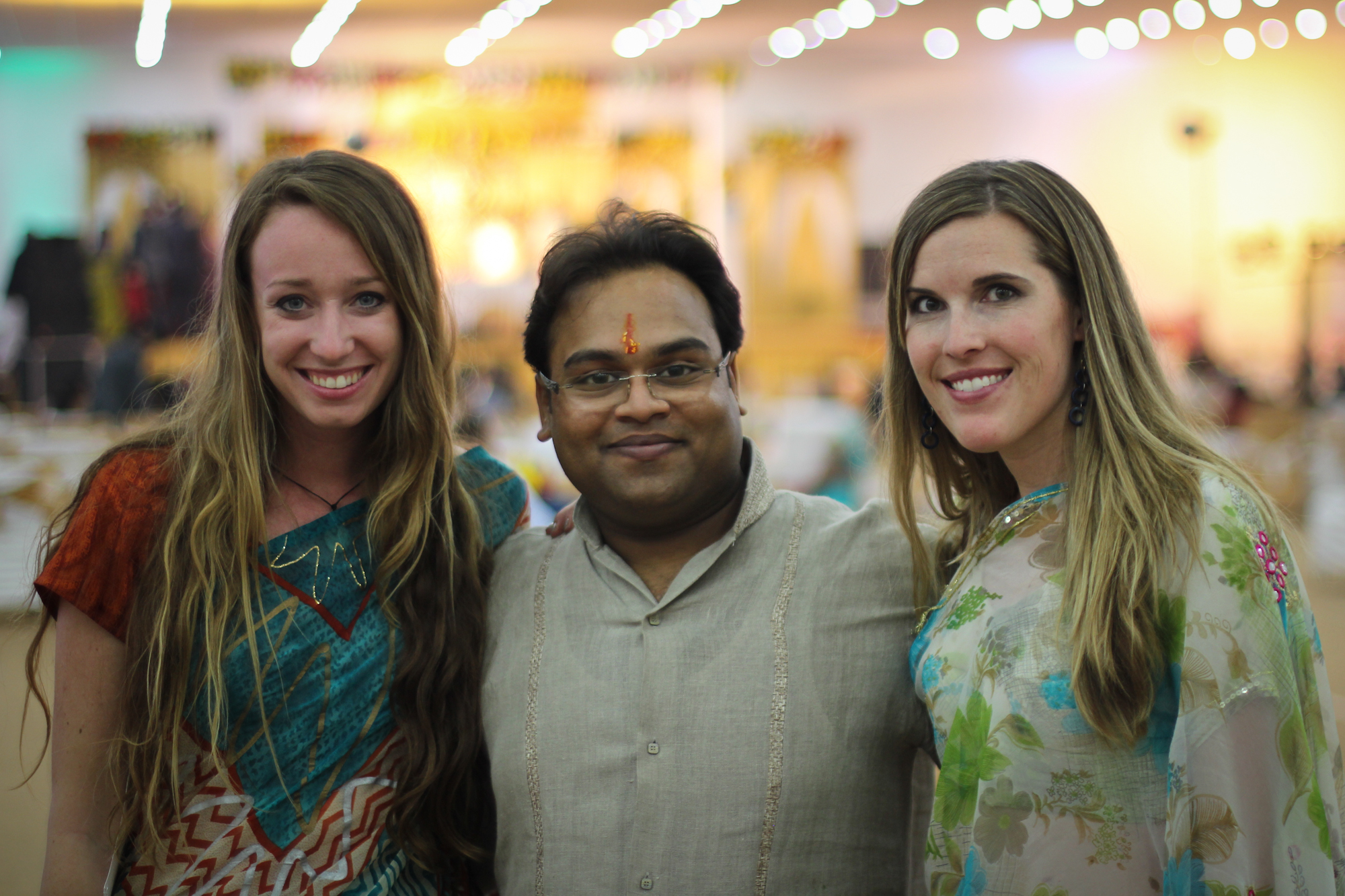 On a cold Friday night one November, I was sitting in front of New Delhi’s international arrivals terminal when Ashutosh said hello.

He wore a long black kurta over black trousers and wielded a cell phone the size of a paperback novel. He was in his 20s, had a round, happy face, and his eyes grew thin when he smiled, which was often.

Ashutosh told me this was his third trip to the airport that day, that he was waiting for yet another round of extended family to arrive in town for his sister’s wedding. In return, I explained that I was waiting for my friend Erin, who was coming from her home in Madrid to spend the week in Delhi with me – as well as to celebrate Thanksgiving, which happened to fall on the following Thursday.

Erin was even bringing a can of Libby’s pumpkin pie mix with her – a Thanksgiving necessity. Considering there was no oven in my apartment, we weren’t exactly sure how this would be put to use, but still we thought it would be important to have on hand when the day arrived.

“How would you and your friend like to go to a big, fat Indian wedding next Friday?” Ashutosh asked. As thrilled as I was by his invitation – after six months in the country, I had yet to attend one – I told him that Erin was leaving the same day.

“No problem,” he said. “Come to the ring ceremony on Thursday. It’s at noon. I’ll message you.”

And he did. While Erin and I spent the next week exploring Delhi – feasting on freshly cooked paratha in the bustling back alleys of Old Delhi, haggling with vendors at the Dilli Haat craft bazar, and even making a quick pilgrimage to Agra to see the Taj Mahal – Ashutosh faithfully kept in touch, sending me texts about the big day to come.

For as long as I can remember, Thanksgiving has been my favorite holiday. When I was growing up, my family’s house was always the place at which our relatives converged. The first time our entire extended family was present, my mother had us form a circle in our kitchen and go around saying one thing we were each thankful for.

“I’m just happy we’re all together,” said my grandmother Millie, the matriarch of our clan, through characteristic tears. This line swiftly became part of family legend and is still quoted by her grandchildren on holidays or at weddings, complete with a loving blub or two.

But she was right – in our family, as in many others I’m sure, Thanksgiving was synonymous with togetherness. Thanksgiving was too many people at the dining room table, with even the piano bench and decorative chairs normally on show in the foyer enlisted for seating.

The other trappings of the day – the football, the Macy’s Thanksgiving Day parade, the tryptophan-induced naps – mattered little as long as we were all there, plates matched to the name cards it was my job to write, and each with our own role to play. My uncle would steal a piece of skin from the turkey before we prayed, my mother would pretend to yell at him, my brother would eat all the sweet potatoes, and my cousin Josh and I would compete to see who could put away the most seconds.

So when Thursday finally arrived in Delhi, I couldn’t help feeling a twinge of homesickness as we readied for the ring ceremony. As exciting as I knew the day promised to be, it wouldn’t change the fact that I wasn’t home. My family would be together without me.

Serendipitously, I had been given two saris just the month before, and my Indian roommate Mallika helped Erin and me put them on. We stood there awkwardly, with our arms out to our sides, but as Mallika tucked and folded and draped the six yards of gossamer chiffon around each of us, it felt as though we were being transformed, wrapped in someone else’s culture for the day. Instead of writing out name cards, we donned matching colored bangles, bought sweets for the new couple – Rahul and Aayushi – and caught an auto-rickshaw to the ceremony. Even the can of Libby’s came along for the ride.

There was live music at the entrance to the wedding venue, a band of turbaned young men playing shehnai flutes and drums. Ashutosh was there to meet us as well, this time in a fine linen kurta with a vermillion mark on his forehead.

He ushered us into the festive banquet hall. At the front of the room was a stage festooned with flowers and gold fabric, in preparation for puja ceremonies and dancing. Elaborately decorated tables displayed the gifts the groom’s family had given to the bride’s – cases of glittering gilded bangles, plastic-wrapped trays of nuts and sweets, and small statues of Shiva with his wife Parvati. And in a courtyard off the hall, a long row of stalls cooked up popular street food snacks such as pav bhaji, a tangy tomato gravy garnished with coriander and eaten with buttery rolls.

Ashutosh was understandably busy throughout the afternoon, but he reappeared from time to time, asking if we were happy and well fed. Did we have our lunch? Did we like the food? Were we enjoying ourselves? Yes, yes, yes, Erin and I assured him; in true Thanksgiving style, we had eaten our fill – and then a whole lot more.

But apart from this, there was little that recalled the holiday – no turkey or stuffing, no sweet potatoes for my brother to devour or my grandmother’s green Jell-O salad. I wasn’t even recognizable, enveloped as I was in the turquoise-and-ochre folds of my sari.

Yet when the bride finally appeared, I discovered one key element still remained. The lights were dimmed until only the videographer’s flash illuminated Aayushi – as well as all the family that surrounded her. There were at least twenty people huddled to her left and right, female cousins and aunts holding her hands; walking in step with one another, they formed a slow, graceful procession into the room.

As I stood there with Erin, eyes fixed on their entry, I imagined the parallels between this family and my own. I imagined the inside jokes between cousins, the mischievous uncles and emotional grandmothers, and the joy they were surely feeling to all be here on this special day. Earlier, Erin and I had chatted with relatives who had traveled great distances to be at the wedding – one part of the family from the U.S., another from Oman – and while what had brought them together was vastly different from why my own family was beginning to gather on the other side of the globe, Ashutosh’s family was still exactly that – together.

That afternoon in Delhi, I thought of the circle in our kitchen and said my own prayer of thanks: for the chance encounter at an airport that had allowed me to experience this new layer of my temporary home, and for the unexpected reminder of my homeland in such a faraway place.

And well, there was one other element that remained.

As we rode the metro back to my apartment, the train swaying beneath us, Erin held her can of Libby’s pumpkin pie mix with pride – still unopened and unused, but nevertheless bearing witness to our own Thanksgiving celebration halfway around the world.

Candace Rose Rardon is an American writer, photographer and sketch artist. You can view more of her work on her website.