Home » Wanderlust » Lessons from the Deep

Lessons from the Deep 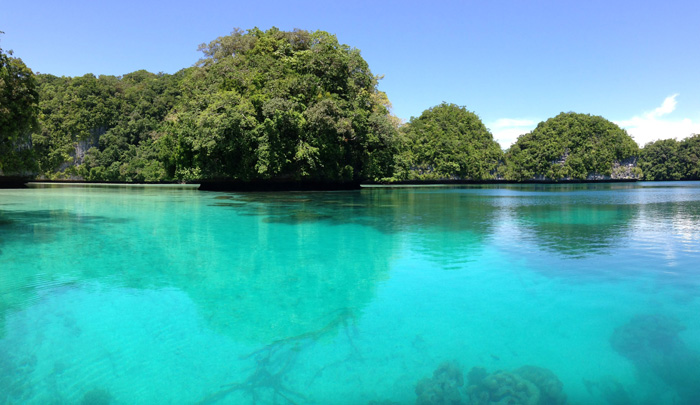 “Could you bring me back a bull shark?” my six-year-old nephew asked. “Bull sharks can live in saltwater and freshwater.” He pointed to his library book. A menacing beast with wild eyes, crooked fangs, and a burly, muscle-ripped physique snarled back at me.

I was moving to Palau, a Micronesian island in the Pacific Ocean, so my nephew’s plan to populate northern Wisconsin’s lakes with a new invasive species wasn’t unfounded. I laughed the nervous laughter of one who has spent her life land-locked in long johns, whose ocean-savvy was limited to vacations and Jules Verne books. I’ve been swimming since I could toddle off the dock. I was scuba certified in frigid freshwater. But the ocean—that vast blue universe that dictates weather and climate, but remains 95 percent Unexplored Mystery—was another beast, a force that looms supernaturally in mythology for a reason. The Greek god of the sea, Poseidon, was famously moody, calm and benevolent one minute, tempestuous and havoc-wreaking the next. In one of their hymns to him, the Greeks sang, “Poseidon of the golden trident, earth-shaker in the swelling brine, around thee the finny monsters in a ring swim and dance…” And that was a song of praise.

I’d never been trapped Captain Nemo-style on a squid-fighting submarine. But I had seen the chilling red flags—too dangerous for swimming!—on the beach. I had experienced the grip of the waves, the buoyant joy that suddenly turns perilous with the change of a tide or an undertow. I wanted nothing to do with swelling brine or finny monsters.

“I’ll see what I can do,” I said to my nephew, praying to Poseidon that paradise would be bull-shark-free.

A month later, it appeared Poseidon had answered my prayers: Palau is blessed with a barrier reef, an 18,000-foot vertical coral wall that diverts typhoons, tames waves, and lulls the water around Palau’s Rock Islands into a soundless, lake-like sleep. This was Ocean Lite, a sea for beginners.

Yet I was promised that, like the stingless jellyfish in Palau’s marine lakes, these sharks would be harmless, too busy perusing the smorgasbord of the reef, enjoying top-of-the-underwater-food-chain ranks, to bother with homo sapiens. And since work permits gave me and my husband “local” status for the year, and local perks included diving some of the world’s best underwater sites on the cheap, I had to suppress any nascent fears: Brian and I would stick to the scuba buddy system. I would think of the sharks as really big fish. I would definitely keep it cool.

On our first sunny Saturday, after motoring through quiet blue-green inlets and coves, we dropped anchor near Ulong Island and “Survivor Beach,” where the reality show had been filmed. With survival on the brain, I strapped on my fins, waddled to the boat’s edge, flashed a semi-confident OK sign, and backrolled into the water.

Moments later, I saw my first reef sharks at the mouth of Ulong Channel. “It’s fine,” I reassured myself. “They’re just really big fish off in the distance.”

But when one pivoted our way, my breath went berserk through my regulator. I checked my gauge; fear was fast depleting my air supply. “Buck up,” I thought. “The big fish aren’t interested.” 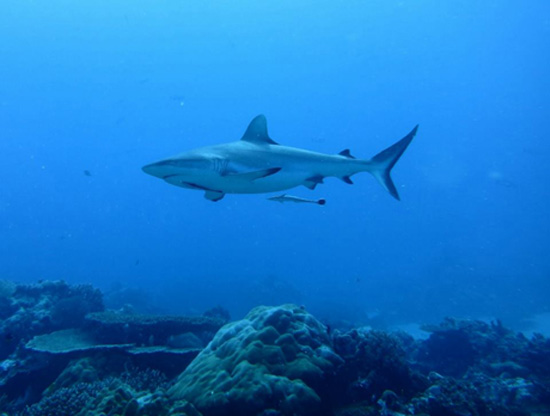 Inside the channel, we drifted with a light current. On certain incoming tides, we would learn, Ulong could make you feel like a superhero in space, propelled through a wonderland of hawksbill sea turtles, brown-marbled groupers, and giant clams the size of small cars. You could launch rocket-like from here to there, flip gravity-free handsprings off the sandy bottom, inhale to inflate your lungs—the body’s natural flotation device—and sail above approaching corals, then exhale to deflate and sink in time to examine a hot pink sea anemone or a grouchy moray eel.

This time, we hovered, meditating on stately Moorish idols as they meditated on a patch of lettuce coral.

Until a reef shark gunned in my direction.

“That big fish,” I repeated, “does not care about me.”

Up close, though, the sharkiness of the reef shark was undeniable. I saw the white-tipped dorsal fin protruding blade-like from his spine. The predatory yellow bead-eyes. The ragged arrangement of razor teeth inside a jaw that hinged hungrily open. My higher-thinking neocortex registered these details, along with the creature’s proximity to my elbow, while my reptilian brain screamed: “SHARK!”

I kicked. I flailed. I grabbed Brian by his wetsuit and launched myself around him, using his body between me and the shark like it was my personal human shield.

This was decidedly uncool, I realized when I opened my eyes and saw we were still alive. The shark had swum on, more interested in fish than humans after all. I smiled feebly through the bubbles of my regulator, trying to figure out how to sign, “Sorry you landed a selfish freak for a life partner,” underwater.

The months passed slowly, as if the equatorial heat cooked everything to a slow simmer. Internet connections were sluggish. We unplugged. We ate coconut and clam meat scooped straight from the shell. We chewed betel nut beneath a palm-thatched roof, laughing with Palauan friends who taught us to spit with enough force that the red juice wouldn’t drip down our chins. We swam daily, dove regularly. And while I still had occasional panics that something menacing lurked in the deep, I began to appreciate the weightless ease of swimming in saltwater. Palauans live by the lunar calendar and tides, and I found peace in that natural rhythm. It was another kind of weightlessness, paying more attention to the moon and shoreline than apps and newsfeeds.

It was through the ebb and flow of days like these that I gradually warmed up to island life. In six months, I’d come a long way from the freshwater girl who feared the open seas. When I heard a local shop had space on a “unique dive”—a rare chance to see fish aggregates spawning during the full moon—I called. I may have exaggerated, a lot, about our certification levels and experience. We were in.

We met before sunrise and loaded our gear in the dark. I was nervous. But it wasn’t until our guide sped past the usual spots, beyond the outer reef, that I was officially in over my head.

This was ocean in its truer form, Poseidon’s domain, Nemo’s whirlpool, pitching and rolling the boat, rattling our steel tanks, knocking us off balance as we struggled into our gear. I need to get into the water or I’m going to retch, I thought. But out here, the ocean churned below the surface as well.

We descended 80 feet to a murky, desolate scene—drab foliage, a few rocky outcroppings, everything whirling in the washing machine of the sea. I sought to anchor myself by grabbing tall reeds, but they were slippery ropes. I groped for one after another while the surge sucked at my body like a giant vacuum. Feeling desperate, I looked around, and saw with clarity my own tenuous grasp on life: the reef’s edge, the deep blue Philippine Sea. I was clinging to a reed at the end of the earth, my body flailing toward the abyss.

Our guide signaled, and I swam as fast as I could after him, away from the ledge, kicking hard toward a storm-like cloud in the distance. With proximity, the cloud morphed into thousands of red snappers, spinning, swarming and shifting, a wild underwater tornado. 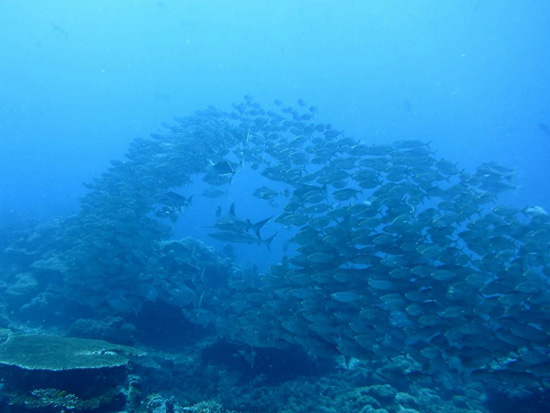 A female fish erupted from the herd like a bolt of pink lighting, leaving a trail of roe in her wake. The male fish gave chase, bouncing off of her and each other like bucks in rut, clashing clouds of spermatozoa. (In case we misunderstood, our guide pointed enthusiastically to the fish, then gestured like he was jacking off.) These explosions occurred every few seconds, and we watched, awestruck, as if the whole thing were a well-timed fireworks show. I forgot about the swells and the abyss. We were orbiting the dark universe, pulling the curtain on nature’s most basic and private act. It was the most ordinary and extraordinary thing I have ever seen.

A muffled, high-pitched shriek turned my attention to our guide, who gesticulated wildly toward a gray mass on the perimeter. He pantomimed two horns on top of his head: bull shark. First one, then two, appeared, stalking the snapper in tandem, with blunt snouts and gnarled fangs out.

I looked to Brian. I saw that he was OK. I remembered to breathe—the number one rule of divers and Zen Buddhists alike. To the sound of my body’s own metronomic rhythm, I watched this struggle of creation and destruction, beauty and madness, power and vulnerability—the stuff myths and classic stories are made of. The stuff we’re all made of.

When we ascended to our five-meter safety stop, the sun had risen. Shafts of light beamed all around, and the water shimmered with iridescent sparkles, as if a giant glitter jar had spilled into the sea. For a moment, I had the sensation I was floating inside a snow globe, the kind we kept in the windowsill as kids, shaking snowflakes over a frozen scene.

I blinked, and saw that those snowflakes were scales, thousands of them cast off from the friction of fish mating beneath a full moon. The scales tipped, fell, swirled, quaking all around me as I breathed, suspended below the surface, between worlds, in this realm of earth-shakers and finny monsters.

“The sea,” Jules Verne wrote, “…is an immense desert, where man is never lonely, for he feels life stirring on all sides. The sea is only the embodiment of a supernatural and wonderful existence. It is nothing but love and emotion; it is the `Living Infinite.’”

I knew now what he meant, how the sea was both earthly and not, belonging to no one and everyone. How one could stand before the mystery, the Infinite, and not fear. How not fearing felt blessed. The notion of an ocean sanctuary took on new meaning now. Poseidon could take me or leave me, but I would emerge from the water that day as if from a baptism—as if, by the grace of some god, I, too, had shed my scales, left something I no longer needed behind, and emerged, raw and blinking before a new sun.

Anna Vodicka’s essays have appeared in Brevity, Guernica, The Iowa Review, Michigan Quarterly Review, Ninth Letter, Shenandoah, and other literary magazines. She has won the Missouri Review audio contest for prose and her writing has been shortlisted for Best American Essays and the Pushcart Prize. While her heart resides squarely in the lakes region of northern Wisconsin, she has lived on the U.S. East and West coasts, in South America and in Spain, in addition to Palau. You can find more about her at her website.