Jordan’s Bull: An Encounter in Mali 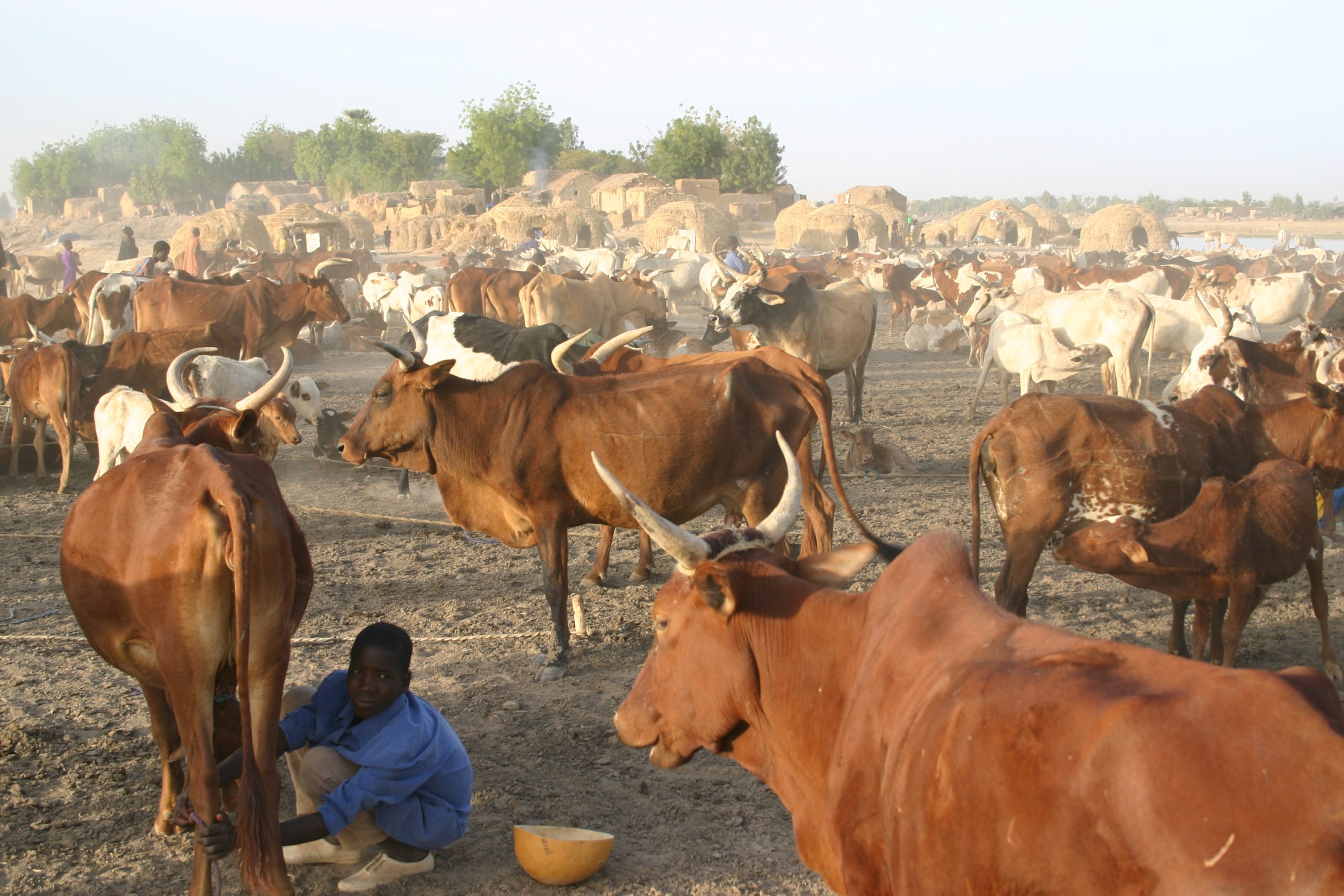 I watched hippos surface with wiggling ears as the boatman poled our dhow past the submerged herd.  We were both tense, expecting a bluff charge, while only feet away white pelicans with long golden beaks floated in the shallows casually scooping minnows in their great fleshy pouches.  On the opposite shore the grass huts of the Fulani glowed like fiery tumbleweeds in the hazy sunrise as bare-breasted women pounded their dirty wash on river rocks.

At this bend of Mali’s Niger River, the lethargic water resembles dark roasted coffee as it slowly meanders on towards the fabled city of Timbuktu.  I was in spear-and-loincloth Africa to chase the end of an era with my camera.

The Fulani, hereditary nomads of North Africa, had driven over 1,000 head of their cattle onto a small island to graze for a few days and as is their custom, they had surrounded them with their traditional grass huts.  Fulani move about like the wind; they and those like them are vanishing from the African continent.

My dhow was piled with bunches of bananas, gifts of a delicacy hard to come by in such a remote place. As I expected from past experience, when they saw me coming, the village children swarmed me on the beach, looking for treats.

While passing out the fruit, I noticed one little boy sitting by himself, scooping mud from the river.  He was fashioning curious animals out of the mud and laying them on a rock in the sand to bake in the sun.  They struck me as wonderfully realistic from the hands of one so young.  He worked with an intense concentration and the sureness of an instinctive artist that drew me to him.  When I approached to tell him how much I liked his animals, he did not speak or acknowledge me in any way, so I dropped off a banana, left him to his work, and walked up the bank to the village.

There, in front of a grass hut, I was warmly greeted by the village headman, named Able, who, noting my interest in the boy, told me his name was Jordan. “Like the river in the Bible,” he said.  Able took both my hands in his and held my gaze as if searching for something in my face until he finally added as a matter of fact, “He does not speak.  He is touched by God.”  He then asked me to sit with him and take tea.

While Western medicine has unpronounceable names and diagnoses for various mental states, it has been my experience that in many remote cultures, people like Jordan are often grouped under the title of “touched by God.”  In my own country such a child would probably be on a regimen of medications and therapy, or even confined to a “facility” to alter his behavior, but in rural Africa, people like Jordan are believed to exist on an alternate plane and are considered a liaison to the spirit world.  Their condition is accepted as a gift to the village and they are often the people who become shamans or healers, commanding both power and respect.  In rural Africa there is no mental illness, only spirits, both evil and good.

I drank the welcoming cup of tea and made small talk as custom demanded, but I could not take my eyes off the young boy at the water’s edge.  I asked Able if God ever spoke to Jordan or through him and his answer was only an enigmatic smile as he topped off my teacup.  I knew that any further questions could only result in a conversation beyond my comprehension, because to this man the physical and spirit worlds are intermingled, and I am still a long way from being able to claim the same.

With Able’s blessing I wandered into the vast cattle herd to take photos while clouds of grasshoppers fled my shadow.  Men filled calabash gourds with the morning milk, then handed them off to young boys who carried the nectar back to the village.  The women busied themselves ferrying goat-skin bags of water to the herders.  The air was full of bees swollen with pollen and the panoramic sky emphasized the vastness of the African plain; wood-fire smoke mingled with the stench of a thousand feral longhorns, the voices of nature became an aria, and the only mechanical sound was that of my shutter capturing limitless beauty.

Then I felt a slight tug on my pants leg.  I looked down just as Jordan slipped his hand into mine. I had not heard him coming and he had not said a word.  Together we stood surrounded by baying cattle, taking in the moment. He was eating a banana.

I began to walk slowly and Jordan kept pace, his hand swallowed by my own. As we passed them, people stopped working and stood at an informal attention.   I thought at first that the men were simply offering a respectful welcome to a visitor while the women were naturally demure, but as we continued, I realized that it had nothing to do with me.  They had stopped their work to acknowledge Jordan as he passed by, and something more than that.

At first the sound was almost indistinguishable from the constant breeze along the river, but it grew in intensity and volume until I could discern a harmonious chant.  It was a traditional chant, the likes of which I have heard countless times in Africa, and yet it was its own.  Rather than a narration followed by a chorus, it was a constant mantra of the entire village, emanating from their souls more than from their lungs.  It was a sound as old as the earth, a sound that held both agony and ecstasy.  It was a sound I felt as much as heard.  We were surrounded by the entire village on their feet, chanting.

It was melodious and calming and at the same time emanated a current of power that enfolded me like a net, sweeping me along in its mystery and ceremony.  Within the encircling herd, hundreds of heads and shoulders now turned towards Jordan, who still held my hand.  His head was tilted skyward, his eyes were closed, and he showed a tiny smile as he wiped banana from his chin.

Was this happening because the village holy man had left his trance to walk among them, or was I, this exotic visitor, just an excuse for a spontaneous celebration?  I had no idea what was taking place and I really did not care; I only wanted the moment to continue. Jordan was in another place–or perhaps he had summoned another place to our here and now–and something inside told me he was indeed touched by God.

Jordan began to walk, this time leading me by the hand. The people parted as we passed them but continued their grand chorus.  Time slowed, sound intensified, colors glowed with brilliance, and I held the most sublime sense of belonging.  I remember herons flying overhead and egrets by the waterside; I remember thinking how the emerald body of a dead cicada was the most brilliant green I had ever seen.

Minutes that seemed like hours passed, then I found myself back at Able’s hut.  Jordan let go of my hand and returned to the riverside and his clay animals. He had not spoken a single word.

I do not remember the chanting coming to an end, but suddenly all I heard was silence, and when I looked about, people were again tending their cattle. I felt elated yet unsure, as if exiting a dream.

It was late afternoon and the golden sky was turning crimson as the sun submerged into the black water.  People became silhouettes as Able walked me to the river’s edge, where the boatman waited.  We exchanged no words because none were sufficient.  Our silence was validation enough that something extraordinary had taken place.

As I walked past Jordan, he rose and pressed something into my hand, folding my fingers around it with great solemnity.  He did not speak and made no eye contact.  He simply returned to his place by the water and his clay animals.

His gift was small, hard, and cool in my hand and I held it there, not looking at it until we reached the center of the river. It was a tiny clay bull, just like those that had surrounded us all day, Paleolithic in simplicity, pregnant with symbolism.

I did not watch for hippos during our return crossing or notice the ethereal beauty of the sunset.  I could only stare at the tiny figure in my palm, running my fingers over it again and again, reliving the day in my soul.  I did no analysis nor did I yearn for answers. I wanted only the day as it was, now a memory that I could recall whenever I wished through the tiny clay bull I held in my hand.

Later, at a café in Timbuktu, I met two people who had both preceded me to the island.  Both had taken notice of the silent boy by the water.  Both told me he had not reacted to them in any way, and the people had been friendly but had not sung or chanted.

I am sure the world is full of Jordans, mostly overlooked or even ignored, visible only to those with open minds and hearts. Whether he was “touched by God” or simply a mute little boy, Jordan had been elevated to a special position among his people, and somehow conferred a special connection to me. I’ll never know why he chose me that unforgettable afternoon, but I do know that he took me on a journey, and offered me a gift, that have touched and elevated my life ever since.

Experience your own transporting encounters on GeoEx’s Mystical West Africa.