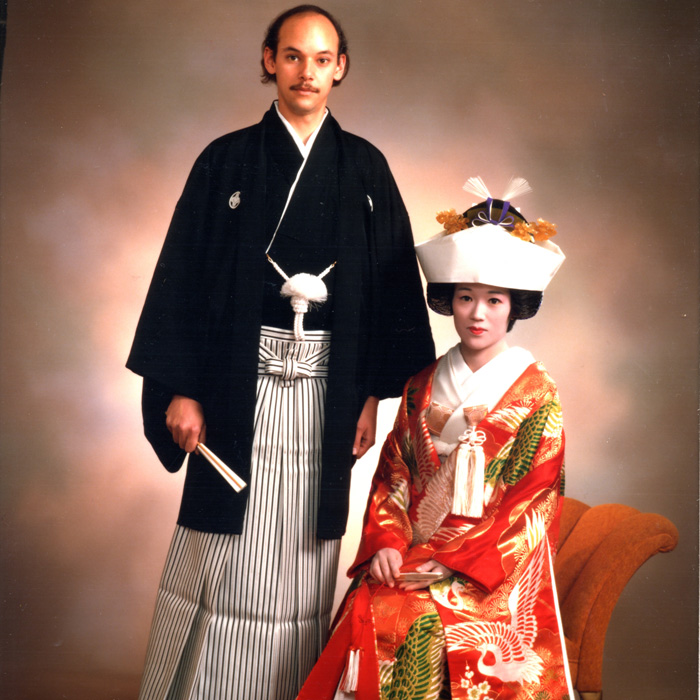 Note: Wanderlust editor in chief Don George has just published the first collection of his own travel stories and essays, The Way of Wanderlust: The Best Travel Writing of Don George. The collection presents 35 pieces, set in 24 countries, from 40 years of world-wandering. The story below, reprinted from the book, is the very personal tale of a universal ceremony: a marriage of souls and cultures, in the heart of the heart of rural Japan.

Of all the journeys in my life, the most extraordinary occurred in the early 1980s in Japan, when my wife, Kuniko, and I traveled to her hometown of Johen to observe and celebrate our marriage in the Japanese Shinto style.

The journey to Johen, a tiny village located in the southwest corner of the island of Shikoku, was a revelation in itself, a trip through layers of modernity into the heart of the country.

We flew first from San Francisco to Tokyo’s Narita airport, then switched planes to fly to Osaka. From Osaka, we traveled by train past steam-belching factories and concrete-block apartment buildings into suburbs where two-story wooden houses were set irregularly among rice paddies the size of tennis courts, and beyond them to the port of Uno.

We spent the night with friends in Uno, then rose early to catch the ferry that traverses the Inland Sea to Takamatsu, the principal city on Shikoku. The ferry set off in a thick mist, and soon we were plowing by tiny islands—a stand of pines and a solitary cabin or two—that hovered uncertainly, as in a sumi-e painting, in the fog.

Kuniko said that this particular ferry was famous for its noodles, so we bought two big, steaming bowls and settled inside. There we were surrounded by a veritable symphony of slurping: Construction workers in sweatshirts and headbands, schoolkids in shorts and baseball caps, grandmothers in somber kimonos—all were vigorously sucking away. In Japan, it’s considered bad form not to, so after a few hesitant attempts, I began slurping happily away as well. (As I always suspected, the noodles do taste better that way.)

At Takamatsu, we transferred to a rickety local train that wound along the rugged northern and western coasts of Shikoku, where the mountains plunge to the sea, past forests of pine and scatterings of houses tucked into the hills, with smoke pluming from their chimneys.

We could tell the time by the ebb and flow of passengers: the housewives returning home from shopping in the late morning; the schoolchildren in their white shirts and dark skirts or shorts in the early afternoon; the farmers, factory workers, and fishermen around sunset. As we got farther and farther into the country, other differences became discernible as well: The clothing was less sophisticated and stylish, the faces rougher, the postures more relaxed. Tangerines were eaten and their peels thrown onto the floor, tiny glass bottles of sake were lined up along the windows, and men slouched back with their feet on the opposite seat.

When groups of men got on, the train turned loud with laughter and reverberated with clipped, guttural talk far from the genteel sounds of Tokyo. And when schoolchildren got on, they stared and giggled behind their hands at me.

We rode that train for six hours, to the end of the line in a town called Uwajima, about forty miles from Johen. There we caught the Johen bus, and after an hour’s ride in darkness punctuated only rarely by house lights, we arrived in Johen—a full thirty hours after we had left San Francisco.

Johen sits among thickly forested hills and lush green fields in a rugged and virtually untouched region of Shikoku. Very few foreigners have ever visited there, and sometimes wandering its streets—seeing adults stop in their tracks to gape at me, and little children turn away in terror or, conversely, run up to touch this strange being’s skin—I felt like a medieval European explorer. It is a quiet village of fishermen and farmers, a place of wooden houses arranged along roads that follow the contour of the land, of rice fields and vegetable plots and shops open to the street where housewives in kimonos gather every day for groceries and gossip.

In the days before our wedding, we visited Kuniko’s friends and relatives in the area, bringing small gifts, and explored the country around the town. Certain memories stand out: a conversation over tangerines and green tea at one relative’s house, about the “other foreigner” who married a girl from the town across the hill; random nods and smiles from grandmotherly shopkeepers; a thatched-roof farmhouse in the middle of distant rice paddies; fishing villages with their nets strung out to dry, and men and women in white sunbonnets sitting under tents surrounded by oysters and seaweed, beckoning to us and smiling great gap-toothed smiles while they patiently planted pearls; the quiet streets and wooden houses after sundown, lit from within; a gathering of mothers and children in the late afternoon, flying long-tailed kites in a field; and a Chinese lion dance a group of elementary school students put on in a garage in our honor, the kids in shorts and crew cuts beating the drums with all their might and the lion thrashing about under the garage’s single bulb.

It was in the accumulation and sharing of such experiences—of the meticulously tended gardens outside even the simplest houses, of mornings loud with wind and rain and birdsong, of the wooden steps at the local shrine grooved by centuries of soles—that I first began to understand the Japanese sense of richness in simplicity, of vitality in the unadorned.

The climax of the journey was the wedding ceremony itself—a glorious gathering of friends and relatives in Kuniko’s family home for five hours of eating and drinking and laughing and singing. At the end of that night, after we had made a wedding pledge to each other by drinking sanctified sake three times from three different cups, after we had danced a long and lingering waltz around the room, after I had sung the one Japanese song I knew and discussed in liquor-loosened Japanese all manner of things from Johen’s social mores to Soviet-U.S. politics, I was sitting back holding Kuniko’s hand and listening to everyone clap and sing an ancient folk song. I looked at her gorgeous kimono, and the lavish feast, and the animated faces—and suddenly the simple and the elaborate seemed joined, rounded, in celebration, and it was then I felt that one journey had been accomplished and another had begun, and that I had found a home in the heart of the country.

Reprinted with permission from The Way of Wanderlust: The Best Travel Writing of Don George. Copyright 2015 by Don George. Published by Travelers’ Tales, an imprint of Solas House, Inc. You can purchase this book here.