In Search of Belonging on Turkey's Büyükada Island | GeoEx

Home » Wanderlust » In Search of Belonging on Turkey’s Büyükada Island

In Search of Belonging on Turkey’s Büyükada Island 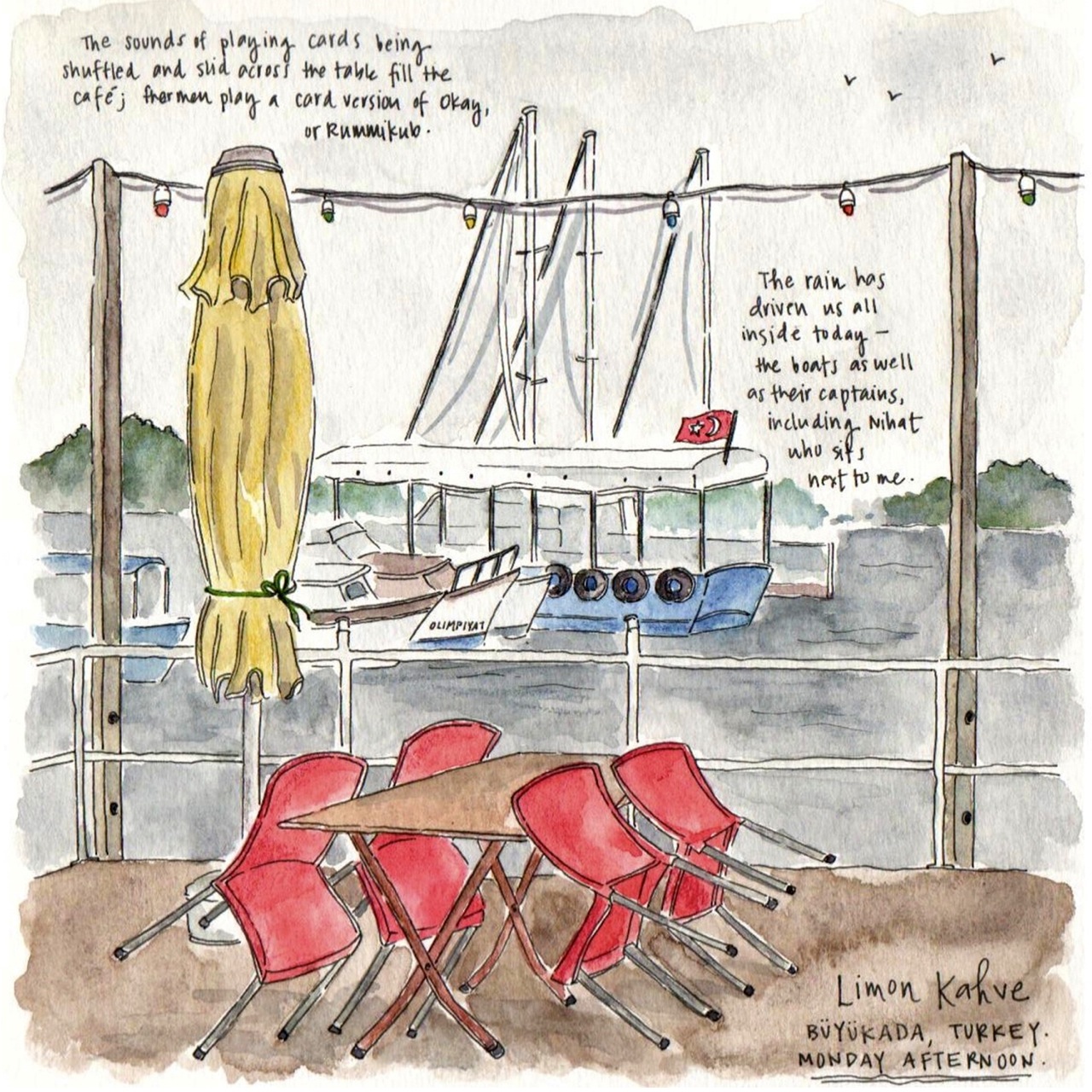 Candace Rose Rardon is an American writer, photographer and artist who recently returned to the United States after ten months living and traveling in Asia. She sketches as she travels, and these sketches, combined with the stories behind them, charmingly capture those fleeting, layered moments that are the stepping stones of travel. Wanderlust will be presenting her on-the-road sketches-and-stories — her sketchbook of serendipities — in the months to come.

It begins as many of my journeys do: with a search on Google Maps.

I type in the name of my current location – Istanbul – and begin scanning its coastline for islands to explore. From Bali to Japan to Malaysia, Google has often helped my islomane’s soul feel at home in the world, and in Turkey, it doesn’t let me down.

There, just off the southern shores of Kadıköy, I spot nine tiny dots of land known as the Princes’ Islands.

On the ferry from Istanbul, which carries us five miles into the Sea of Marmara, I read about the centuries-old Byzantine monastery still sitting atop a peak on the largest island in the group, Büyükada. But what intrigues me more is that apart from municipal vehicles, cars aren’t permitted on the island – only bicycles and horse-drawn carriages.

The avenues of Büyükada are thus quiet and leafy, sheltered beneath the branches of purple bougainvillea and plane trees. As much as I loved the energy of Istanbul and its ever-shifting soundtrack of clinking teaspoons, crying seagulls, and the calls to prayer, I find myself falling even faster for the island’s otherworldly calm.

I’m about to keep going on my rented bicycle when rain begins to fall. I spot a kahve, or teahouse, to my left and duck inside. I soon realize I’m not the only one with the idea. All around me sit local boat captains, dressed in dark jackets and knitted caps, passing the time playing cards and a Turkish version of Rummikub called okey. They smoke and sip tea from tulip-shaped glasses and watch out of the corner of their eyes as I begin to sketch the scene outside.

I befriend one of them, Mehmet, who treats me to a cup of tea and ensures the name of his vessel – the Olympiat – makes it into the picture. And as I sit here next to him in the smoky teahouse, sketching the boats bobbing in the harbor and listening to the men shuffle cards and okey tiles, I marvel for a moment that but for an internet search, I wouldn’t have discovered this world.

The island would exist whether or not I happened to visit, but just for a day, I get to belong on Büyükada.