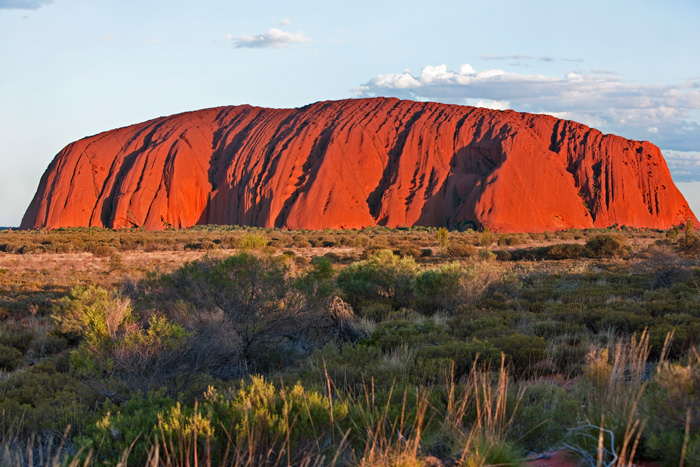 Wanderlust editor in chief Don George has just published the first collection of his own travel stories and essays, The Way of Wanderlust: The Best Travel Writing of Don George. The collection presents 35 pieces, set in 24 countries, from 40 years of world-wandering. The story below, reprinted from the book, describes an unforgettable encounter in a sacred setting in the Australian Outback.

The first time you approach Australia’s Uluru, the world is still dark. You are rolling through the pre-dawn desert in a minivan when the big black monolith looms suddenly through the side window. It is difficult to judge how far away it is, or how close you are, because the whole world is monotone and flat. Yet you feel the power.

You have been wary of your preconceptions about the place—the accumulation of iconography and clichés, photographs seen and descriptions read. You don’t want to feel exactly what you know you are supposed to feel. You want a raw connection with the thing. You want to wipe your brain clean, approach the rock like the first human ever to take it in, stumbling incredulously toward it like some red sun-trick on the horizon that doesn’t disappear, but only grows larger and larger until finally all you can do is fall on your knees before it.

And then you see it, and suddenly your wariness falls away. You are drawn to the dark immensity purely, simply, irresistibly, and with a power that comes from the thing itself and not, as far as you can tell, from your own desire to feel the power. Because it catches you by surprise and because it is such a strong, pit-of-the-stomach pull, you trust it.

As you get closer, you creak and crane your neck to see as much of it as you can, until you notice—because you’d been so obsessed with seeing the rock, you’d missed this—that you are passing other minivans and buses and dozens upon dozens of people. They wear jeans and warm jackets and hold steaming cups of coffee in their hands; some stamp their feet, others set up their cameras. They have come to see exactly what you have come to see, and you realize there is no point in trying to feel better than them or different from them. You have to share Uluru with them.

Your minivan parks and you emerge, brushing off the cobwebs of some conversation about kangaroos and dingos. All you want to do is concentrate on the rock itself: Uluru.

You position yourself at one of the barriers beyond which visitors are not allowed to step, less than a kilometer from the rock, and you look. The rock is a smooth, sloping burnt-orange rise against a deep gray-blue sky. Before it are dark waves of vegetation, which surprise you; somehow you imagined the rock standing solitary in a vast flatland extending red and cracked-dry to the horizon.

For the next half hour, as the earth slowly tilts toward the sun at your back, you watch.

The rock gradually grows more orange, more bright, and you begin to see the fissures and pocks in its side, shadowy sluices where rainfall must flow, deep gouges sculpted by wind and water and time.

The sky lightens from dark blue to a pastel peach-pink, the bushes and trees in the foreground take a silver-green shape, the rock’s orange brightens, and pocks darken like caves in its side.

The sky grows lighter and lighter, the rock face brighter and brighter; more veins and pits emerge in relief.

And then, in what seems one miraculous moment, birdsong bursts from the bushes and trees and the sun fires up the face of Uluru and it is as if the rock is glowing from within, pulsing, breathing, one huge burning ember. And then it is like nothing you’ve seen before and you simply don’t have the words to describe it. It is alive with some kind of earth energy of its own. It pulses. It gathers everything into itself. It beats with a luminous orange energy that courses through the world around it. It is the heart of the soil and the rocks and the roots beneath the soil, coming to life.

You think of the elaborate sun temples that ancient civilizations had constructed, of Stonehenge, Teotihuacan, Machu Picchu, Sounion. And for a moment you think that this could be nature’s sun temple, a construct manifesting a connection so far beyond comprehension that the only possible response is awe.

And then the moment ends. The people pack up their cameras and pile into their buses. Within minutes, they are gone.

But you remain, listening to the birdsong, looking at the rock.

You’ve had enough mysticism for one morning, so you drop to your knees and pick up a handful of soil. You want to ground yourself.

Sift, sift. The grains tilt through your dusty hands, bursting into sun-lit life.

Reprinted with permission from The Way of Wanderlust: The Best Travel Writing of Don George. Copyright 2015 by Don George. Published by Travelers’ Tales, an imprint of Solas House, Inc.