The Bonnie Bounties of Scotland 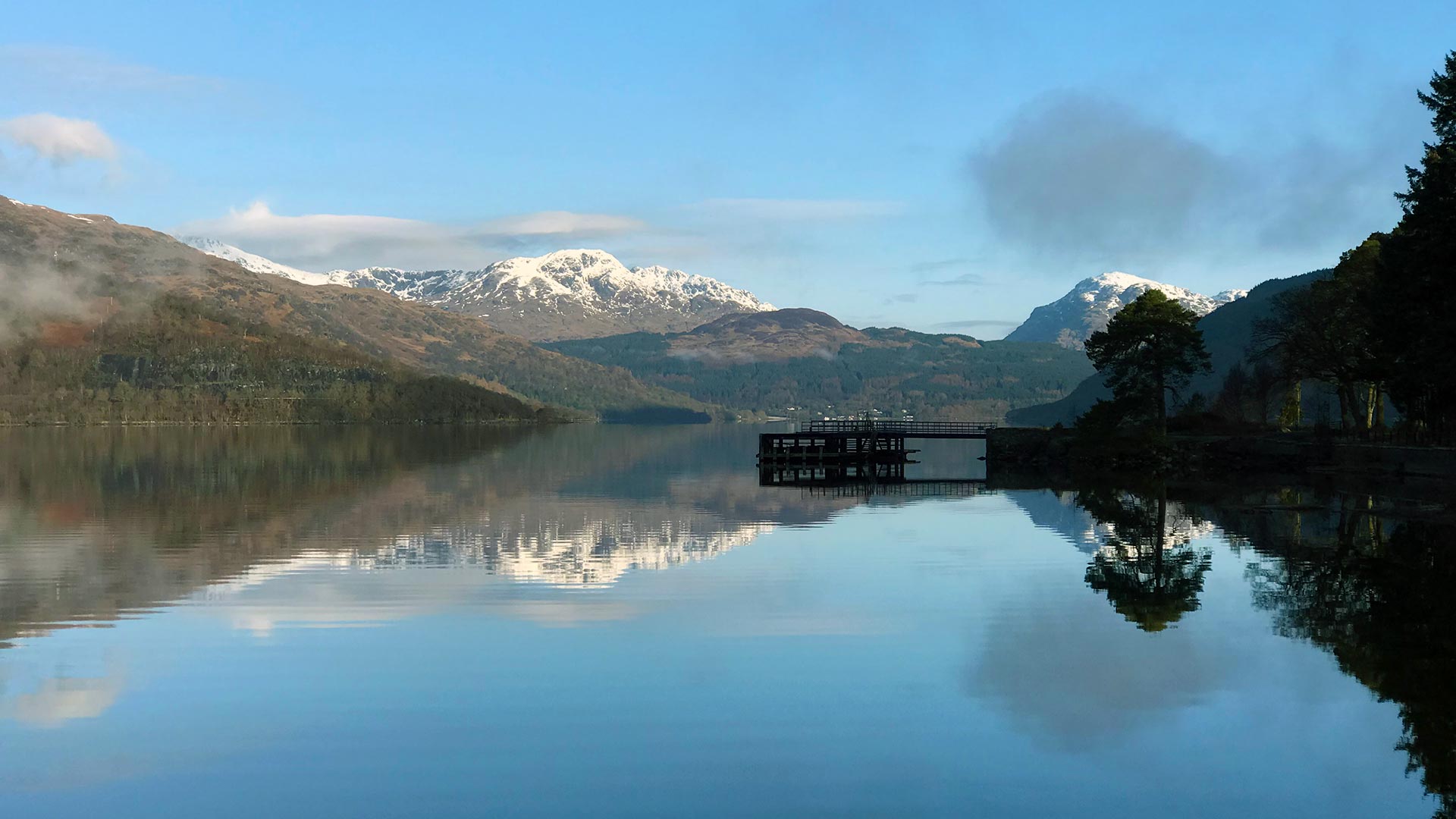 Let us celebrate the splendors of Scotland: from the urban and the rural, Glasgow to the Highlands, Orkney to the Firth of Forth, with 6,000-plus miles of coastline and 790 islands! There are marvelous multiplicities of things to see and do, in cities and in less-inhabited realms. Whether your passion is history, serious- or light-hearted walking, a wee dram of whisky (Orkadian whisky is rather smooth, harking from the Orkney Isles—which are also home to Scara Brae, a 5,000-year-old Neolithic settlement), the origin of the tartan, deciphering the Scottish accent, art and architecture, learning about ice climbing in Kinlochleven (where a 500 ton wall of ice awaits!), taste-testing the wide array of seafood available (including my new favorite fish, hake), or nibbling on Scottish tablet to satiate your sweet tooth, there is an abundance of riches to do and discover on a tour of Scotland. Do not tarry and get yourself to this bonnie land!

It may be optimistic and/or ambitious to say that Scotland is a year-round destination, depending on your relationship with weather, but it really is, especially if a little rain or snow, a heat wave, or a possible cloud of midges (summer companions in the Highlands!) leave you undeterred. As the savvy traveler knows, journeying off-season has its benefits: not quite so many other travelers to share your views, daffodils emerging from snow banks, space on the “Harry Potter Steam Train” (see below) or on the ferry to the Isle of Skye. Of course, if you prefer, you can go in the summer and see the heather in full bloom, kayak in the sea, cavort and canoe in the loch, and not worry about snow when you decide you’ll try to climb Ben Nevis after all and prove to yourself the mettle of which you are made! Ultimately, the best time of year to visit Scotland can be decided on what you plan on doing during your time there. 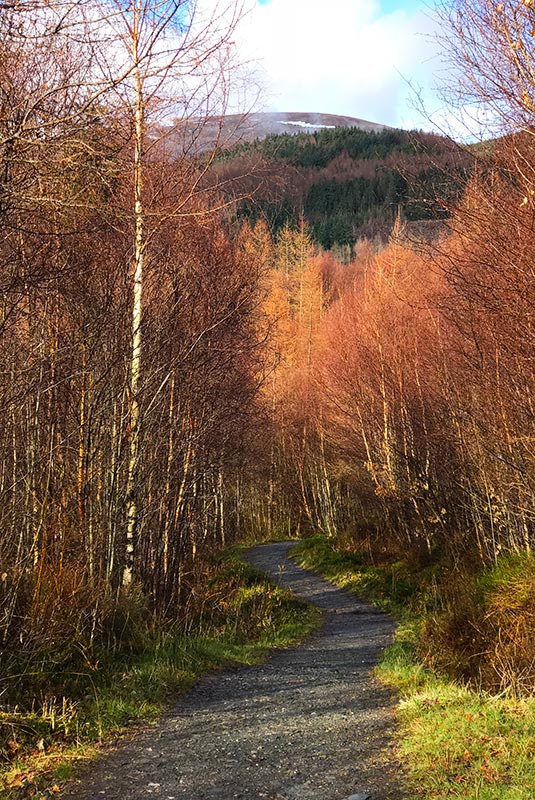 The Scots (like many other neighbors in the northern hemisphere) say that there is no such thing as bad weather, only the wrong clothes. This was certainly true on my most recent visit. As we ambled along the east shore of the banks of Loch Lomond, quietly humming “on the bonnie bonnie banks…”, the light constantly fluctuated. Since I was sartorially prepared, I could fully appreciate the unceasing cloud show, with its delightfully drifting shadows, and after an impromptu shower, the raindrops that glittered along the branches of a birch tree forest like a tiara run amok.

Getting to Know Glasgow

The largest city in Scotland, Glasgow has a great art and gastronomy scene and fascinating neighborhoods. Before you jump off to Loch Lomond (just 30 minutes away), the Isle of Arran (see below), and other Highlands spots, I recommend spending a couple of days wandering its cosmopolitan streets, popping into its shops, and sampling its fare. Aesthetic minded travelers won’t want to miss visiting the home of the amazing artist, architect, and designer Charles Rennie Mackintosh. 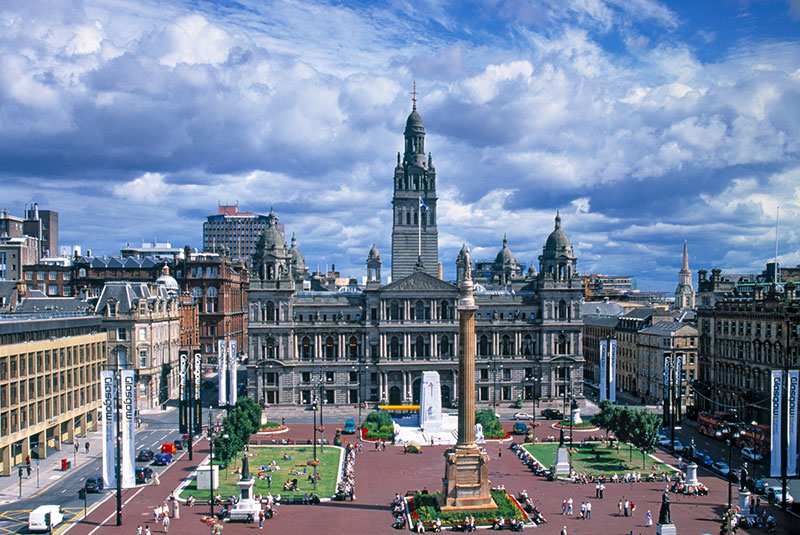 Charms of the Scottish Highlands

If you hanker for a bit of countryside, a slice of sky, a fallow field, some distant or not so distant hills, a glistening lake, or a sea view, the options are plentiful. 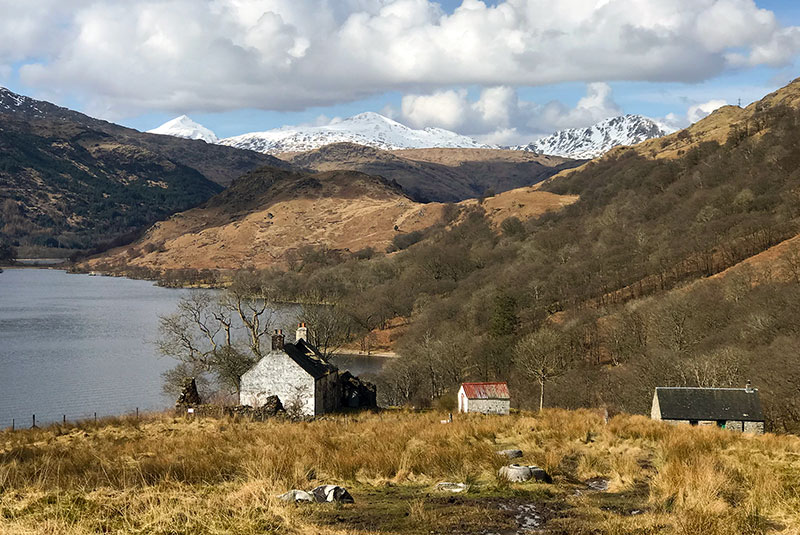 Hiking trails abound. Mountains in Scotland that rise to 2500–3000 feet are known as Corbetts, while those that are taller than 3000 feet are called Munros. There are 222 Corbetts and 282 Munros in the country. Many locals aim to climb all Munros, something they call “Munro bagging.” Does that sound like you? Or are you more of a Corbett bagger? Either way, better get cracking. 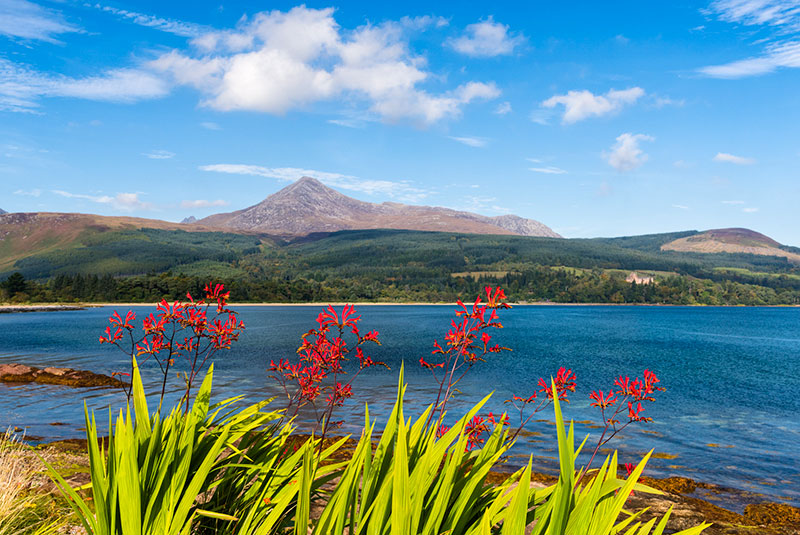 Through the centuries, thousands of castles have been built in the country, and several have been converted into luxury accommodations for visitors—an ideal stop on your tour of Scotland. The best offer privately guided hikes through the beautiful surrounding countryside and gourmet, locally sourced cuisine. And with the right connections, you can even enjoy a Scottish-themed evening, complete with folk music, kilts and clan tartans, storytellers, whisky tastings, and fireworks. What an incredible way to experience the country’s past and present! 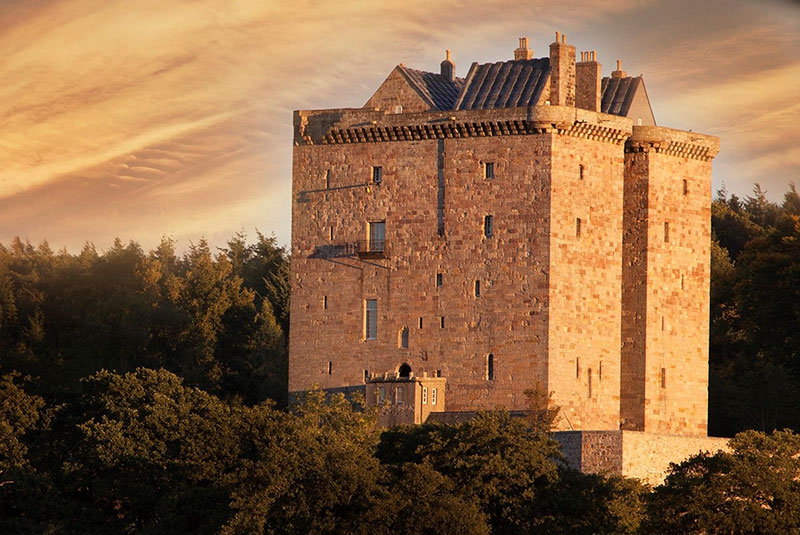 One lesser-known, more-off-the-beaten-track option is Mingary Castle, originally constructed in the 13th century. It perches on the coast, with mountain and sea views, has a drawbridge, and is especially intimate, with only five bedrooms. 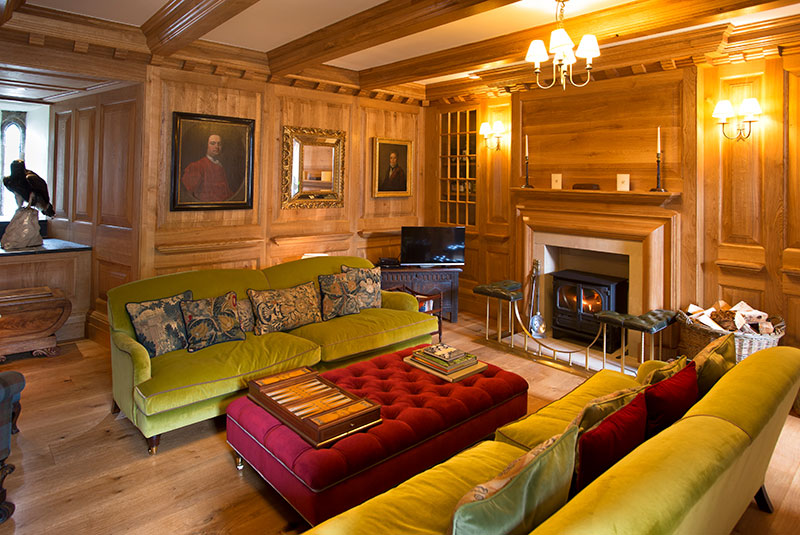 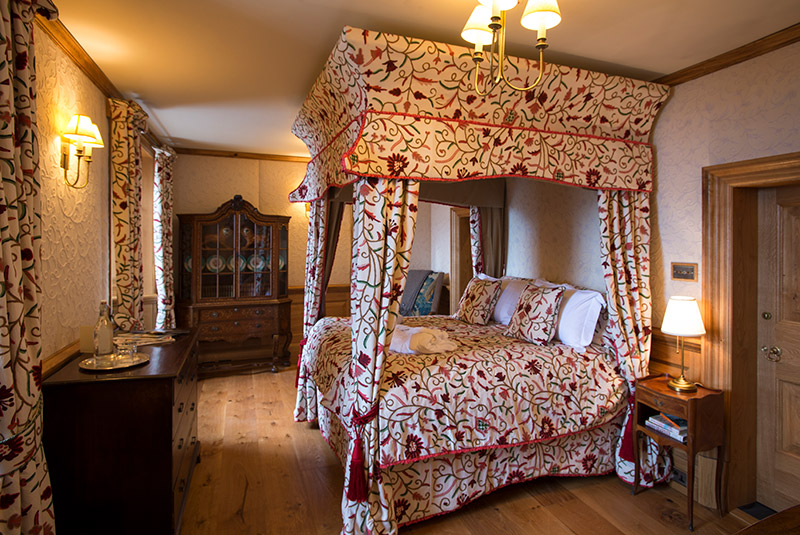 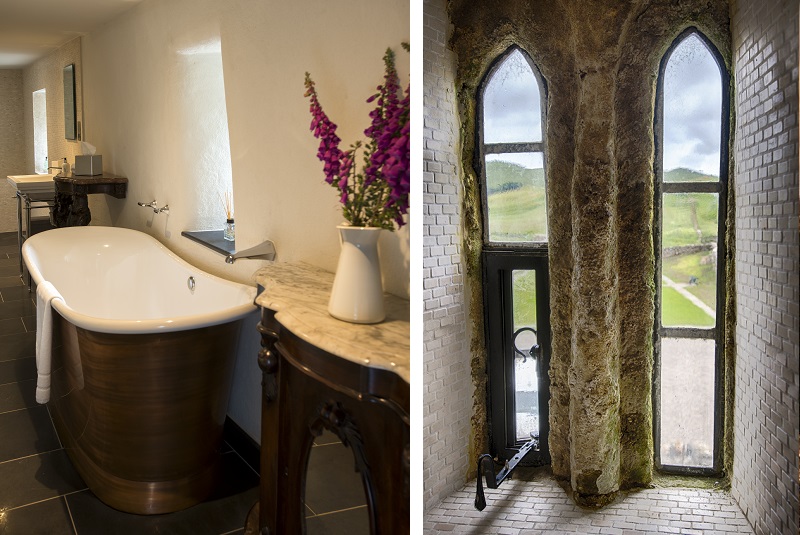 Steam engines have staged a comeback! Don’t miss the spectacular ride from Fort William to Malaig. The whole train bubbles with excitement when crossing the Glenfinnan Viaduct, made famous in the Harry Potter films. Be sure to snag a cushy first-class compartment and think of Ron, Hermione, and Harry Potter as you sip your tea and nibble on your jumping frog…unless it has escaped out the window! 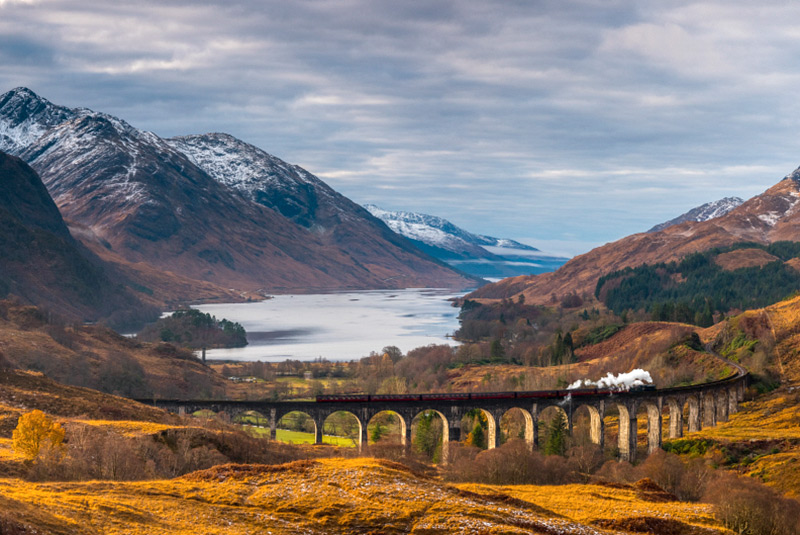 It’s one more reminder that there’s a lot of magic to be found while enjoying Scotland sightseeing! 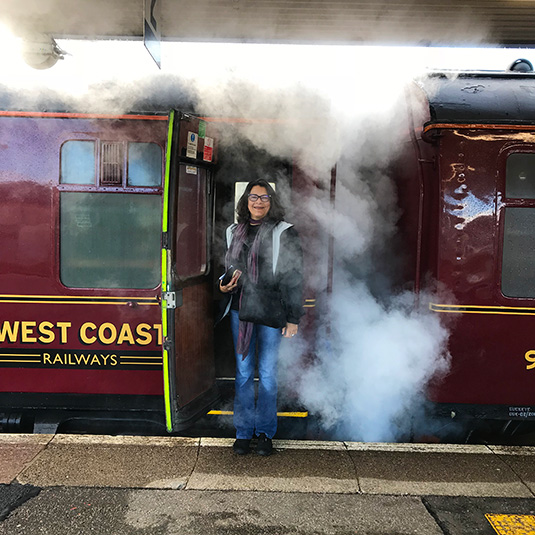 To find out more about what’s possible on a Scotland journey—whether you are traveling with family or not—give GeoEx a call at 888-570-7108.