Big Flavors from Tiny Bowls: A Taste of India | GeoEx

Big Flavors from Tiny Bowls: A Taste of India 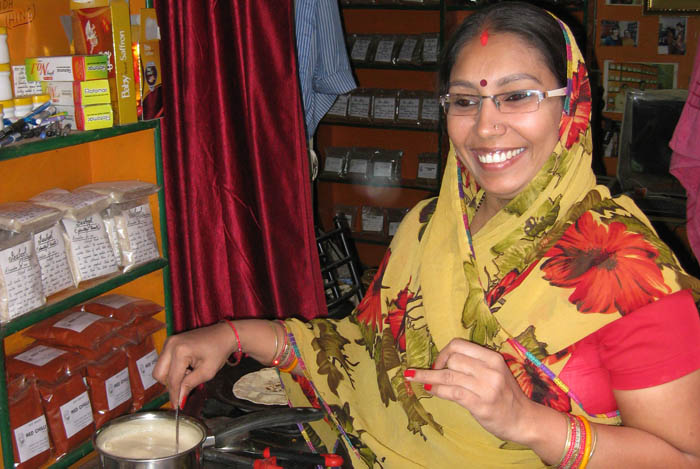 In the still-darkness of Varanasi’s early morning, my brother and I drank Masala chai from tiny terracotta cups. It was approaching dawn on his birthday, half a world away from home and half a day ahead of schedule. The narrow lanes of the old city were already filling with people and there was no good place to stand; we wedged ourselves into a doorway behind an obstinate cow. I paused to breathe in the tea’s fragrant steam, bringing it close to my nose so it might win out over the alley’s other pungent aromas.

Something about the little cup charmed me. It wasn’t meant to be carried away, but to be enjoyed right where I stood. On the ground was a heap of broken crockery; clearly the custom was to smash the empty cup to bits…but also, to stand still, to pause and savor. So seldom do I do this, I realized. Maybe my portions are too large to fully appreciate. My brother and I stood together in the newly waking morning and tasted our tea. It was the first sip of the flavor we’d be chasing for the rest of our trip.

After that, Matt sought out every chai wallah he could find, and I ordered chai at every restaurant and hotel. But nothing tasted as good as that first cup. Each subsequent drink was either too weak or too strong, too sweet or unsweetened. I thought maybe those first sips had been flavored by the experience, and we’d never be able to rediscover the taste. After each drink, Matt dashed his pottery to pieces on the pavement, but I slipped one little cup into my purse. To remember.

There was no shortage of other flavors to experience: buttery naans and creamy daals, shortbreads laced with cumin, curries that managed to be both spicy and sweet, fruited chutneys, savory gravies and minty sauces. A mysterious daub of relish turned out to be pickled garlic, and each tiny clove burst with incredible flavor on my tongue. “This is delicious!” I exclaimed at every meal, waving my fork for emphasis. “I don’t even smell garlicky! Do I smell garlicky? I don’t even think that I do!”

In Varanasi we dined with Aruna and Shanti, who served us a dozen tiny dishes, each in its own little bowl. I started with the peas to be polite (as I don’t much care for peas), but found myself emptying the dish. There were tangy mustard potatoes, a delicate carrot halva and a filo dough sweet painted with edible silver. I took bites in rounds as Shanti told us of hosting Ravi Shankar and George Harrison back in the ’60s. “I was the one who told George Harrison to stop doing the drugs,” he confided.

In Udaipur we followed Meenakshi to the market, where she picked out okra, snap peas and eggplants. Back in her kitchen she set us to work chopping and shelling, while she expertly prepared several dishes at once: yogurt marinated chicken, green chickpeas in basmati rice, eggplant with tomato sauce and sautéed okra. I was captivated by her spice collection. She had an entire drawer dedicated to spices, but the most common ones lived in a round metal box with smaller bowls set inside: bright red chili, saffron-colored turmeric, coriander, cumin and salt. She used all of them, deftly adding pinches to each dish with a tiny spoon.

Her daughter Priya taught us how to make chapatis. She wandered casually into the kitchen just as Meenakshi finished kneading the bread dough, which was equal parts wheat flour and water. “She always waits for me to finish kneading and shows up for the fun part,” said Meenakshi wryly. Priya gave a grin and a shrug.

On a round marble plate she rolled a small ball of dough into a thin disc, dusting it with flour to prevent sticking. “Set it in the iron pan on low heat until you see air bubbles forming,” she instructed. “Now flip it over and cook it on high heat for just a minute. Don’t let it burn.” Next, she pulled the bread from the pan and held it directly over the high flame. Immediately the chapati began to inflate like a balloon. “A few seconds on one side, then a few seconds on the other.” Once removed from the heat, the bread settled flat again and she brushed it with ghee, a clarified butter. “Now it’s your turn.”

Matt rolled up his sleeves and rolled out his dough. His first chapati was a little thick and refused to cook all the way through. “Roll it a little thinner,” suggested Meekashi. “Like your sister is doing. That is perfect!”

He cut his eyes at me. “Move over.” Matt took his time rolling out his second chapati, produced a beautiful thin circle of dough and smirked. But the bread refused to inflate.

“When you put it directly on the flame, you need to start with the side that you first cooked,” explained Priya. “Otherwise it won’t blow up.” She demonstrated again.

Matt bargained for a third try and produced a new misshapen piece. “That’s kind of a square,” I remarked.

“A delicious square,” he replied, unperturbed. He put the bread to the flame and promptly charred it black.

Dinner was delightful, and Matt ate all three of his chapatis, which were deliberately placed in front of him.

In the blue city of Jodhpur we happened on a little spice shop in the old town. “We’re looking for chai,” I told the shopkeeper.

She handed me two open packages. “Smell,” she instructed, and I sniffed at each. The black leaves smelled of regular tea. The brown powder, on the other hand, smelled of Masala chai, but spicy. She took the packages from me. “Come,” she said, “I will show you how to make it.”

She steered me to a small stove and placed a pot on the burner. Then she counted heads: there were the two of us, our guide, and herself. “For four people, we’ll use four cups of milk.” She handed me a teaspoon and held out the package of leaves. “These are black tea leaves from Assam. They have no caffeine. You want two rounded spoonfuls.” I measured the little black pellets into the pot, where they floated in the milk.

“Now, add half a teaspoon of the tea spice.” I read the package: cardamom, dry ginger, black pepper, nutmeg, cloves, cinnamon, mace. “This is my husband’s blend,” she said. “We own this shop together. I am Rekha; he is Anil.” I sprinkled the spice into the mixture.

“One level teaspoon of sugar for each cup of milk,” Rekha told me. I measured carefully. “Now stir well.” I did.

“We’ll bring the milk to a boil five times.” I watched as she let it froth, settle, and boil repeatedly. Then she strained the tea into four tiny cups and passed them around, to my brother, our guide, and me. She raised the fourth cup in salute.

I could smell it before I tasted it, and I knew. This was the recipe, this was the right chai. I breathed deep, letting the flavor reach me slowly on the steam, inhaling the taste before I even took a sip.

Rekha gifted us with copies of her hand-written recipes, and I bought enough spices to line my suitcase. I also bought a set of eight ceramic teacups, which I later found shattered when I opened my luggage. But my clothes smelled incredible.

The little terracotta cup remained safe and intact. It sits on my bureau now, amidst other tiny treasures. When I look at it, I remember standing in the still-dark streets with my brother, in the early morning hours of his birthday, sipping tea together, and tasting India for the first time.

To explore GeoEx options for exploring India, give our destination specialists a call at 888-570-7108.