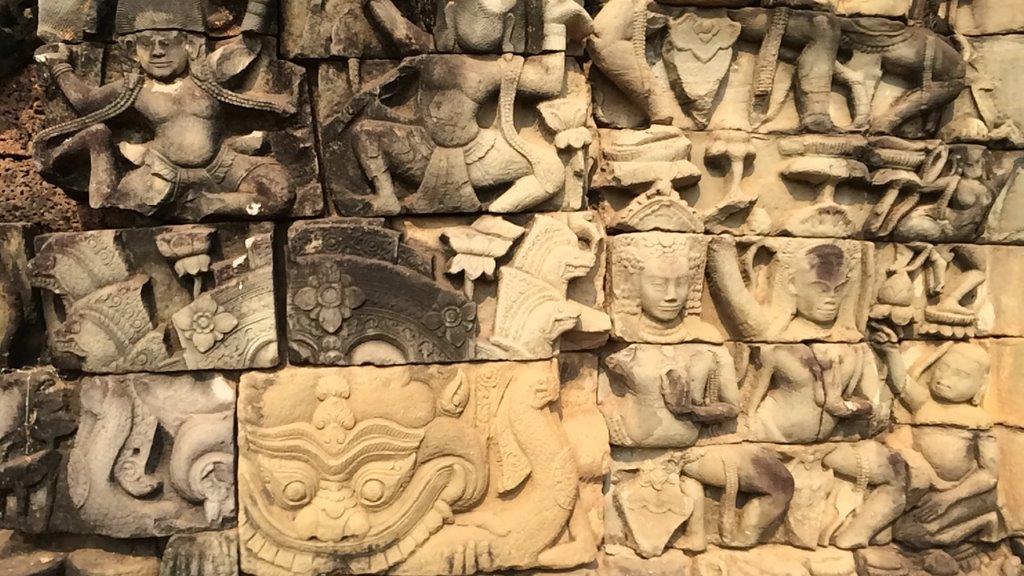 If you go to Angkor Wat and see only the main temple, you’re missing a mesmerizing, slow dance. Please don’t misunderstand: It’s quite true that the most famous complex is as magnificent as any of the marvels of the world. The intricate carvels show tenth-century life and worship in uncanny beauty. But its careful restoration as the symbol of the burgeoning Cambodian nation means that it is tidy in its impressiveness. It is kempt. It is brilliant and it is meticulous.

But if you venture beyond the well-deserved trail of tourist buses, not only do you find a more subtle beauty in temples like Banteay Srai, you find more of a mystery in the impressive disarray of temples even further afield. If you take the 2-hour drive to less trampled outposts like Beng Mealea or Ko Kor, you see what looks at first like endless piles of rubble. Some of them have clearly lost the struggle to the deep roots of imposing trees, even more so than the temple made famous by Tomb Raiders. Eventually, the haphazard piles of temple walls hint at the incomplete story of a larger picture-puzzle waiting to be put back together. They hint at the abandonment and theft and reclamation that’s crossed borders and back for hundreds of years.

Or if you’re willing to brave the multi-hour, dirt-and-sometimes-sand road to Banteay Chhmar, you find equal reasons for hope and despair in these fluid monuments. The reconstruction has only started a few years ago with a small team of respected archaeologists and computer programmers at the helm. A poor cassava farming district and former stronghold where Khmer Rouge and government forces fought until the last, this border town hosts the last building feat of Jayavarman VII, considered the greatest king of the Angkor era.  The land mines were removed only in 2007.  The three walls that remain contain some of the most incredible detail of storytelling.

The question now is: Is restoration feasible? How will the Banteay Chhmar pieces come home from the gardens of French collectors and Thai politicians? Or are all of the sandstone blocks, created as early as the ninth century with bore-holes in the sides for easy transport, simply continue their slow but constant movement around the world?

One can only hope that each piece is returned. And that the patient puzzle-solvers then have years of work, across nearly every Angkor complex, to twist and turn each block-piece into its once-magnificent whole.