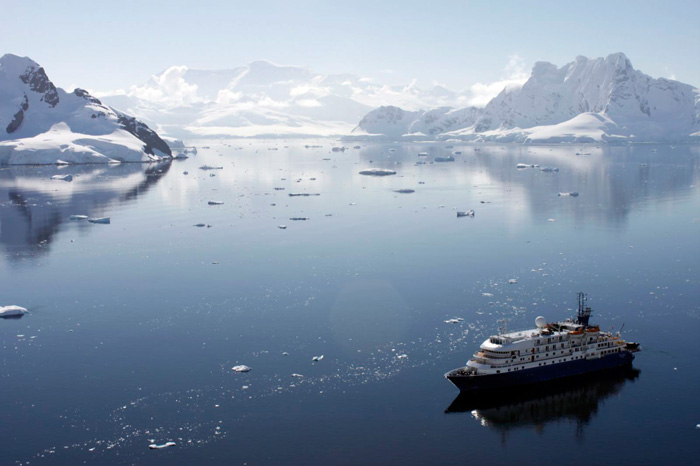 If you’ve ever thought about taking a trip to Antarctica, do it! Don’t let concerns of distance or cold or sea sickness turn you off. The trip is absolutely worth it, the distance is quickly forgotten, and there are prophylactic measures for everything else. The scenery is spectacular, the wildlife is incredible, and the ice is otherworldly. Life on board is pretty nice too, with educational lectures, engaging guides, good conversation over meals with your fellow passengers, and if you’re lucky, even a Jacuzzi on deck. There are plenty of shore and Zodiac cruising excursions, and chances for kayaking, camping, and even swimming for those with an adventurous spirit.

Setting Off from Ushuaia

Ushuaia is the southernmost city in the world and the capital of Tierra del Fuego. This was our port of embarkation and a cute little tourist town in its own right. The surrounding mountains are gorgeous, the waterfront promenade serene, and there were enough little bars and restaurants to keep me entertained for the night before we set sail. In fact, you could easily spend three or four nights here at the end of the world, hiking in the Tierra del Fuego National Park, canoeing on the river, sea kayaking around the penguin colony on Isla Gable, horseback riding or four-by-four exploring in the mountains, or boating through the Beagle Channel to the notable Les Eclaireurs Lighthouse.

My biggest dread, which nearly scared me off from taking this expedition, was crossing the infamous Drake Passage. I am highly susceptible to motion sickness, especially on boats, but thanks to the miracle prophylactic that is the scopolamine patch, I made the crossing unscathed and never even missed a meal! While conditions were certainly no “Drake Lake,” we were relatively fortunate to face only 10-foot swells during our two-day crossing. The real heroes on board were the wait staff in the dining room! If you could navigate your way out of your cabin and onto the deck, you’d see the occasional bird such as this wandering albatross. These guys may travel as far as 75,000 miles in a single year.

A Day in the Life on Board 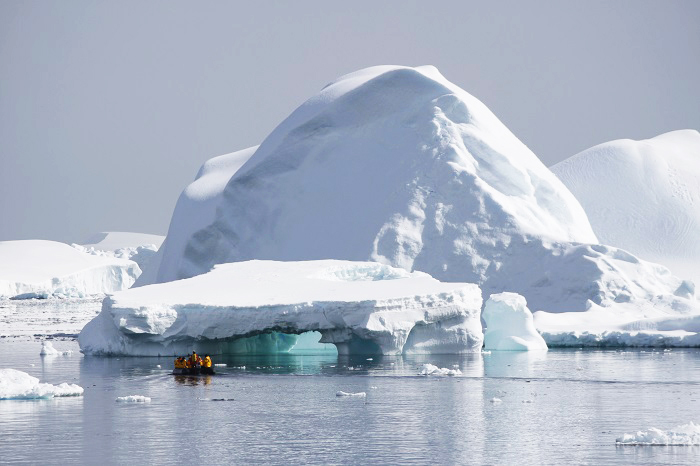 Each day, we went out in the expedition parkas and rubber boots the ship provided on Zodiac excursions from the ship to explore local bays, channels, and landing sites. With wildlife always the highlight of any excursion, we visited penguin rookeries, scouted for humpback and minke whales, and spied a number of southern seal species, including Weddell seals, crabeater seals, and the cunning leopard seal. There were even opportunities for kayaking and sleeping out on the continent. Every day was different, with the ever-changing scenery and variety of sea ice sculptures that shifted in profile and altered your perspective around every corner. Back on board the knowledgeable naturalists gave daily briefings and short lectures in the lounge. 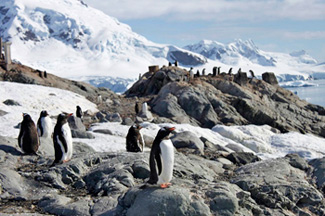 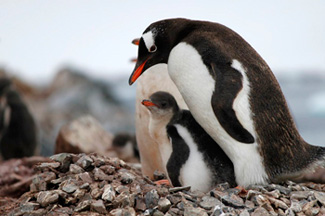 Penguins are the stars of the show in Antarctica. I saw Gentoos and Chinstraps and Adelies and a lone Macaroni and molting youngsters. They are playful and noisy and yes, a bit aromatic too. It was so special just to be able to wander around the rookery and sit quietly and observe these strange and graceful creatures.

We had many excellent sightings of humpback and minke whales, with plenty of fin waving and fluking activity. On this particularly lucky sighting we followed a mother humpback and her young offspring while the youngster frolicked and breached for at least an hour. It was such a remarkable thing to watch–better than any documentary.

Here a minke whale glides past one of our Zodiacs. These guys are curious and fast, but they don’t spend a lot of time at the surface so we’d see them briefly nearby and the next sign of them would be hundreds of meters away.

Seal sightings were pretty incredible too. This guy is a crabeater seal, but I also saw Weddell seals, Fur seals and Leopard seals sunning themselves on the sea ice. Leopard seals fill the ecological niche of the Arctic polar bear here in the Antarctic and have some scary-looking teeth. 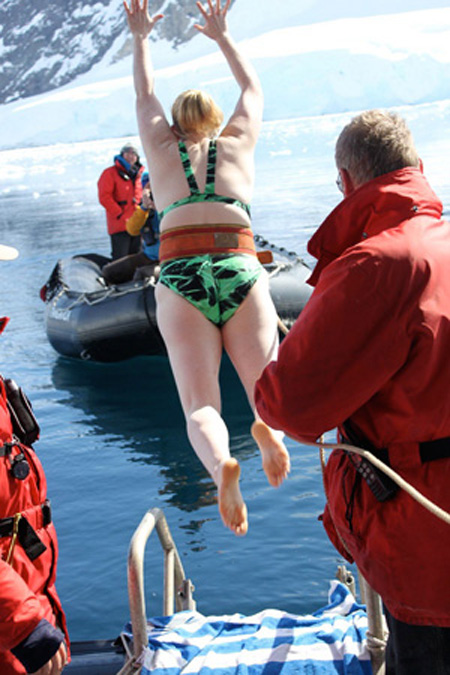 I know it sounds crazy, but the Polar Plunge is one of the most invigorating experiences I’ve ever had. You might think jumping into 0-degree C water sounds unpleasant, but on this incredibly warm and sunny Antarctic day, it seemed crazy not to do it! I’d estimate that about half the passengers on board lined up in their suits and robes for a chance at immortality. (I was second in line so I wouldn’t have the opportunity to chicken out.) You are hooked up to a rope harness so they can reel you back in because after 45 seconds in these waters you’d have no control over your limbs.

A Night on the Snow 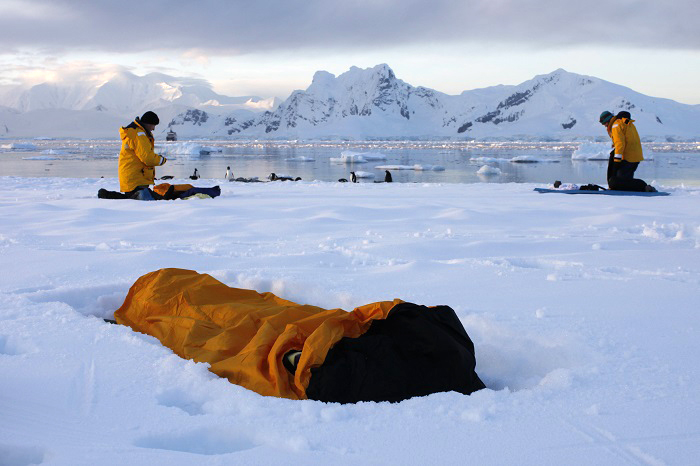 When I saw the option to sleep out ON the Antarctic continent, I jumped at the chance. Joined by a dozen like-minded souls, I stomped out my place in the snow, where the surrounding snow would be my wind break. Then it was a simple warm sleeping bag tucked inside a waterproof bivy sack and laid on top of a rubber mat for insulation. This setup is supposedly a lot warmer than a tent because you have much less air space to fill with body heat. We were treated to a spectacular full moon rising over the mountain before snuggling into our bags to be lulled to sleep by the chatter of penguins on one side and the mating song of a crabeater seal on the other. If I had chosen better socks, I would have had a surprisingly comfortable and warm night out. But as it was, I was awake to capture a remarkable sunrise on film. 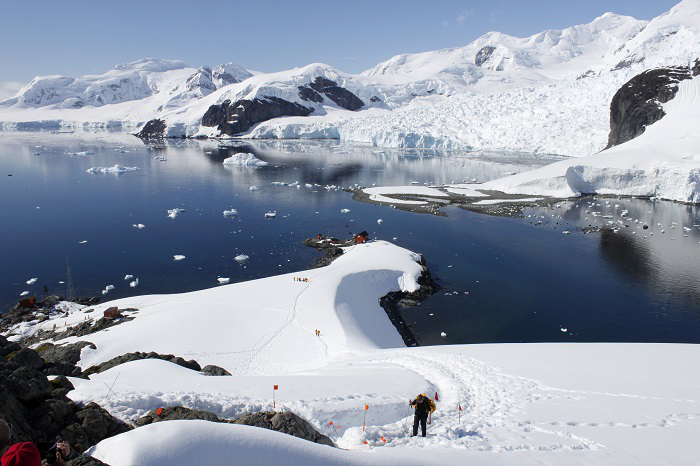 Here I have hiked up to a vantage point above Port Lockroy, the first permanent British base to be established on the Antarctic Peninsula, in 1944. It has been a home to explorers, whalers, scientists, and sailors, and is now a living museum, post office, and gift shop in the hands of the UK Antarctic Heritage Trust. 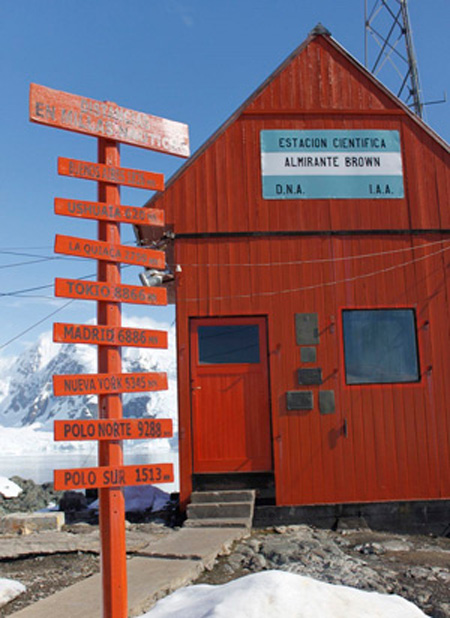 Here at the Almirante Brown Station, an Argentine base and scientific research station, it was pointed out just how far away I am from pretty much everywhere else. There is something of a rivalry between Argentina and Britain for claims on the Antarctic continent. At every place Britain staked a claim and built a station, so did Argentina. There’s a large sign at the port in Ushuaia warning that English pirate ships are prohibited. I camped a night on the snow, but don’t think I’m hardy enough to survive a stint here over the winter, with no visitors or resupply until the next summer.

Becca Glatz creates extraordinary Custom Trips for GeoEx Premier Access. Her travel adventures have included a dinosaur dig in Yunnan, China; roaming on horseback in Mongolia and the highlands of Ecuador; and retracing the footsteps of the ancient Khmer kings in Cambodia.

To find out about which of the many Antarctica cruises is right for you, call one of GeoEx’s specialists at 888-570-7108.