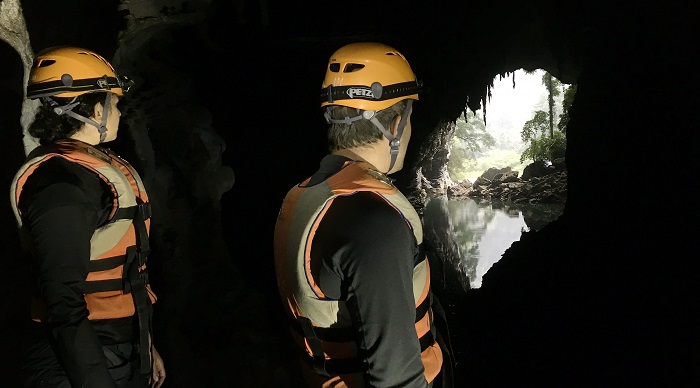 A cave pearl is a small concentration of calcite, found in a limestone cave. It forms over hundreds of years, as water drips down and deposits calcite crystals onto grains of sand. The calcite wraps concentric layers around a nucleus, and the pearl grows marginally larger in the darkened cave as time passes by outside.

This is what my guide conveyed to me, in more basic English, training his headlamp on the little gnarled balls that littered the cave floor. He picked one up and held it in his gloved hand. 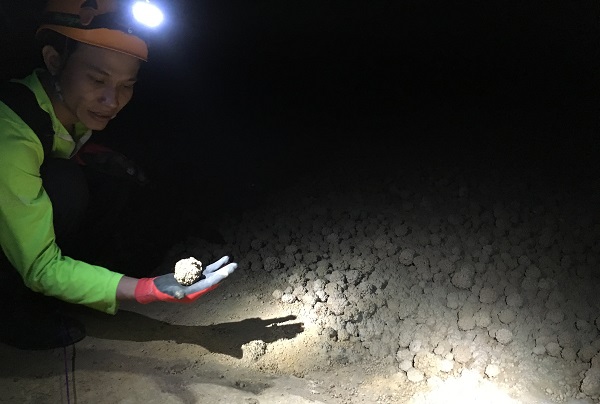 “Can I touch one?” I breathed, reaching toward them.

“No,” he said quickly. “Best to leave them alone.” He set the pearl gently back on the ground, and I withdrew my arm, disappointed. I’d been envisioning a souvenir.

We were deep in Vietnam’s Phong Nha-Ke Bang National Park, exploring the Tu Lan Cave System. I was still marveling at how I’d found myself there, clad in a helmet and headlamp, and streaked with dirt and sweat. I’m not a super-outdoorsy person. I don’t gravitate toward the woods or the mountains to pursue adventure. And yet…

“There’s this cave system in Vietnam,” I heard myself explaining to my fiancé, John. “They only discovered it about 25 years ago, and new caves are still being found all the time. Visitors can explore them now, but you’ve got to trek through the jungle to get there, and swim through some of the caves. And you stay overnight in a tented camp.”

“Can we go?” asked John, his eyes wide with interest.

“Maybe.” I couldn’t get the idea out of my head.

A few months later we were driving through Phong Nha on the way to tiny Tan Hoa village. I’d somehow talked my way into scouting out the area for GeoEx, and I had no idea what I’d gotten myself into.

We pulled up at a small wooden building on the village outskirts. There was nothing nearby, only wide green fields set against the stark karst mountains and the occasional cow. But around the wooden building people were bustling, packing gear into large red bags. Our belongings also went into these bags, to be transported to our camp. We were supplied with gloves, headlamps, life vests, and helmets, and set off with our guide, Victor, across the verdant fields toward the jungle.

I heard the buzz of a motorbike behind me and saw two men zipping down the narrow dirt lane with the large red bags on their backs. “They are part of the porter team,” Victor explained. “They will take our gear to camp.” The men rode up to a stream in the distance, hopped off their motorbikes, walked right down into the water and popped up on the opposite bank. Within seconds they’d disappeared into the nearby jungle.

“They carry our gear on their backs?” I asked, incredulous.

“No other way to get it there,” Victor said simply.

“I told you, you brought too much stuff,” whispered John.

We soon forded the stream and found ourselves at the lip of the jungle, where we paused to don our helmets and gloves. At first this didn’t seem necessary, but the gloves quickly proved essential for pawing our way through the thick vegetation and scrambling over the steep, sharp rocks. In a few places we squeezed through tight crevices, and I bonked my head once or twice, which made me glad for the helmet.

We stopped for an early lunch in a small cave. While our guide and porter arranged a picnic on the cave floor, John and I looked around in awe. The little cave’s formations were great and ghostly, a strange contrast to the sunny afternoon beckoning just outside. 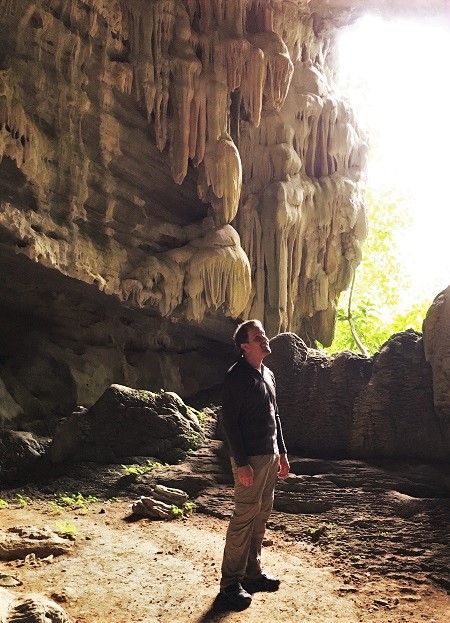 After lunch we pressed on, working our way through the jungle until we reached the mouth of the first large cave. We followed Victor into the darkness, stepping in his footsteps. Our path was cordoned off with ribbons, forming a narrow channel where it was safe to walk.

Victor knelt down carefully and showed us the cave pearls. “Can I touch one?” I breathed, reaching toward them.

“No,” he said quickly, and I deflated a bit. I appreciated his efforts toward preservation, but I wanted to touch those bumpy little cave pearls. I wanted to walk beyond the ribbon. Where was the adventure in this?

“Come this way,” Victor said, and led us to a craggy cave wall. “This is the way out. Watch me first.” He shrugged out of his backpack and shoved it through the wall, revealing a hidden vertical crevice. Then he threaded his body through the tiny space, narrating as he disappeared: “Head first, then shoulders…one leg, then the other…and lift yourself through.” It took three tries before I could fit myself through the hole. With Victor and John each giving encouraging (and contrasting) instructions from opposite sides of the wall, I felt like a jigsaw puzzle piece being crammed into the wrong spot.

Finally I squeezed myself through into a little stone cavern with no discernible way out. “Up here!” Victor called, and I looked up to see him waving down at me through a hole above my head, backlit by the sun. “Climb up,” he beckoned, and I scaled the rocks until I popped back out into the daylight, once more on the top of the world. 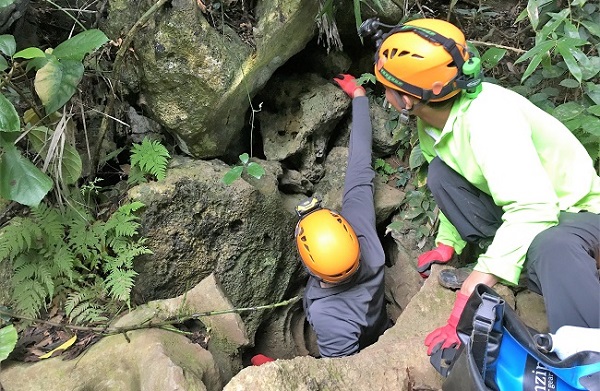 At the mouth of the next cave we stopped to put on our life vests. “We’ll have to swim in here,” Victor informed us, tightening my vest until I was surely two sizes smaller. “Turn your headlamps on.”

In this cave there was no ribboned pathway. We walked beside Victor into the huge expanse, aiming our lamps at the incredible formations that dripped from the ceiling and sprung from the floor. John spotted a bat, hanging casually upside-down. My light swept over what appeared to be a small pile of bones. “What is that?” I asked.

“Looks like a monkey skeleton,” Victor said. John and I turned to one another in surprise—and blinded each other with our headlamps.

“Turn off your lights for a minute,” Victor instructed, and the darkness that enveloped us was the blackest black I’d ever seen. I held my hand in front of my face and wiggled my fingers. I couldn’t see a thing. We’d been swallowed by the cave, concealed completely from the world outside. I thought of Tom Sawyer, lost in the cavern with a burned-out candle stub. I thought of that monkey. I turned my headlamp back on.

As we moved deeper into the cave, the air suddenly turned warm and damp. “We’re getting near the water,” Victor explained. Little bugs started flitting to our headlamps. Behind me, John coughed and spat. “Bug in my mouth,” he said, and as I laughed, I swallowed a bug of my own.

“Turn off your headlamps,” Victor advised, and indeed this provided instant relief. But as we approached the water we needed to see, so we had to turn the lights back on. The bugs dive-bombed us without mercy.

“Whoa! That’s a bat!” John exclaimed. Attracted by the bugs they like to snack on, the cave’s little bats were coming to life, and coming to rescue us. Under other circumstances this surely would have freaked me out, but with moths flocking to my face in great numbers, I found myself rooting for the bats.

The bugs became even more aggressive as we tried to navigate into the water. “Met’s moof!” I urged from behind closed lips, but Victor was temporarily incapacitated with a gnat in his eye. I tried to close all the holes in my face.

Through squinted eyes I could see that we were standing on the edge of a big, dark body of water—a cave lake. Are we really going swim in that? I wondered wildly, then flinched as a bat swept by. There was no time to think about it. Victor gestured for me to jump—and I did.

For an instant I was scared, and then suddenly I was swimming in the pitch-black waters of the cave. I heard a splash and a shout, and John was there beside me. The bugs disappeared almost immediately.

We laughed hysterically, unable to believe what had just happened. Our voices bounced off the cave walls, shouts of triumph and disbelief and sheer giddiness.

And then we were floating in this ancient, living museum. We fell silent. We swam through the dark, gazing at the spectacular formations around and above us. It was another world.

After a few minutes we saw a shaft of light in the distance, and when we rounded the corner the mouth of the cave yawned in front of us, revealing the bright day and green jungle beyond. I realized that I have seen some amazing places and witnessed some amazing things in my life, but this was probably the coolest thing I have ever done. 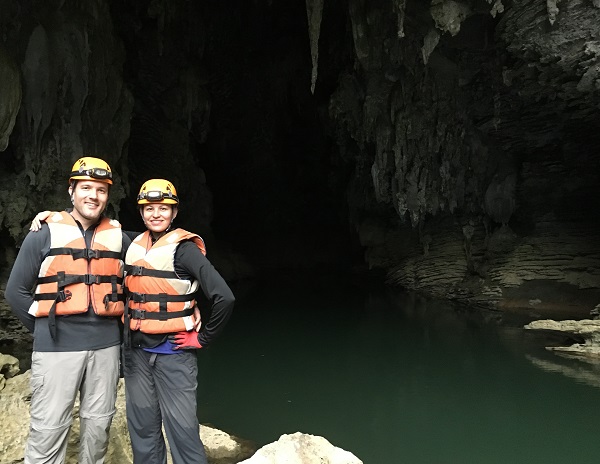 Two days later I was scrubbing the dirt off my sneakers in the hotel sink, wishing I had a souvenir from my adventures in the caves. My water shoes had accumulated an astounding amount of mud, and it was clogged deep in the holes that were meant to allow for drainage. As I wedged my thumb into one of these holes, an object dislodged and made a loud clunking noise as it hit the basin. “What is this?” I wondered aloud, holding it under the faucet until I could identify it.

It was a cave pearl.

I didn’t steal it. I swear.

Errin Mixon, GeoEx Director for Asia, has handcrafted a Vietnam Adventure to feature cave exploring, as well as hiking in the remote Sapa region, a luxury cruise through Halong Bay, and insider experiences in Hanoi. 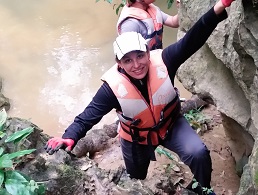 Contact Errin to learn more about this incredible trip by calling her at 888-570-7108 or by e-mailing [email protected].