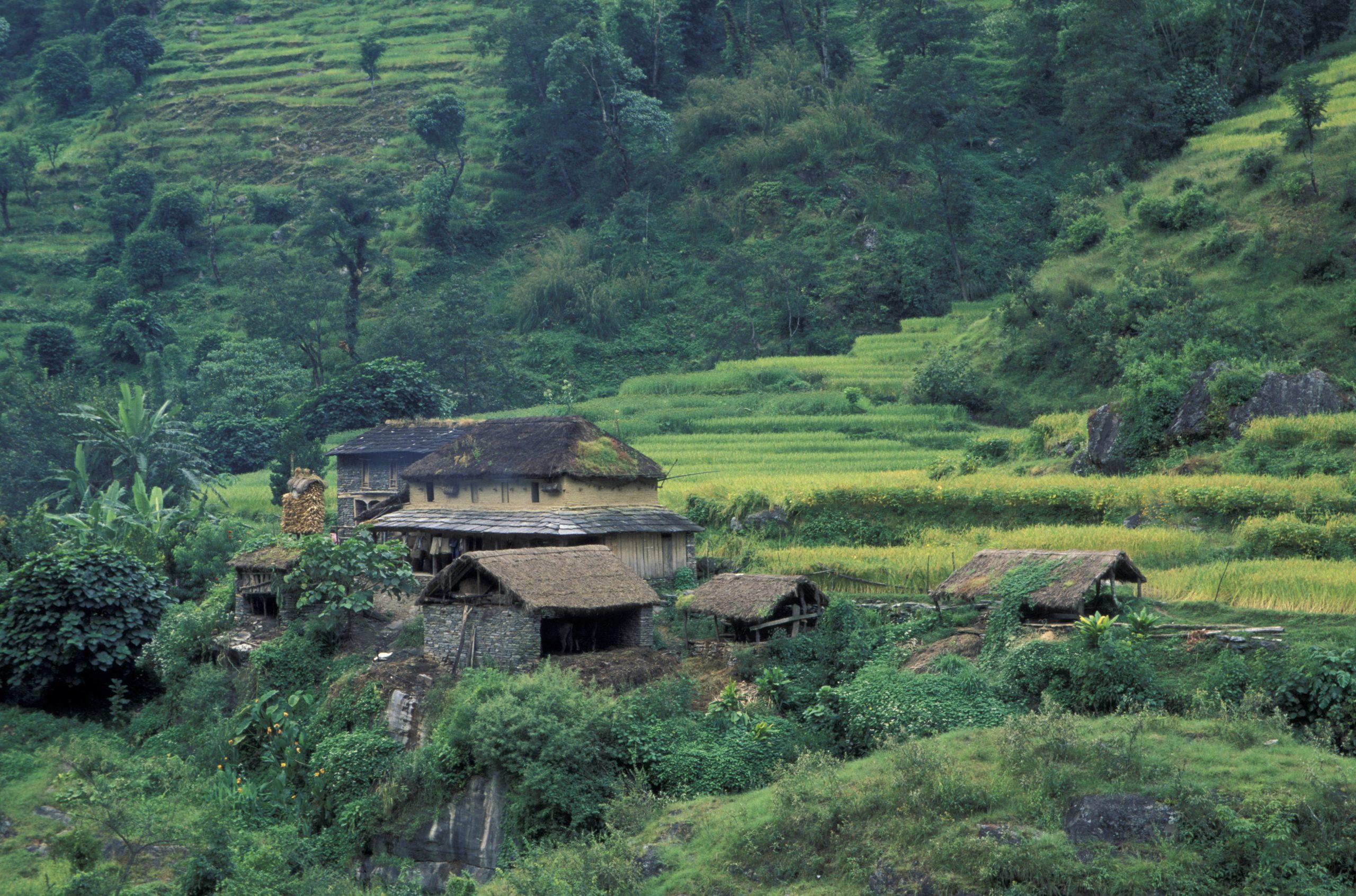 The Arun Valley, slicing through Eastern Nepal, is the world’s deepest river gorge. Back in the 1980s, not many travelers bothered with that remote and undeveloped place. Trekking in Nepal was all about Everest, Annapurna, and the Langtang Himal: places where the mountains had celebrity status, and a hungry hiker could find a good buckwheat pancake.

In the spring of 1984, I was living in Kathmandu on a Rotary fellowship. Having learned a bit of Nepali, and eager to test my mettle, I flew from Kathmandu to Tumlingtar, where our twin-engine plane shimmied to a stop on the grassy runway. From there I set off north, on foot, intent on tracing the Arun along the length of its gorge — all the way to the Tibetan border.

This was in April, and it had been a wet winter. Conditions could change in an instant; my backpack was heavy with gear. After a few hours alone on the muddy, slippery trail, I realized I needed help.

Stopping in a wayside town, I was able to hire a porter: a friendly teenager named Norbu. Norbu — meaning ”wish-fulfilling gem” in Tibetan — was a Sherpa Spiderman: fleet of foot and incredibly fit. He shouldered my huge pack with ease, and we set off together toward the mountain snows.

The trail became drier, higher, and more beautiful, carpeted with brilliant red rhododendron petals. Norbu and I trekked up ridges and down verdant valleys, sharing tales. One brilliant morning, over breakfast, he shyly expressed a wish to visit a nearby village called Bala. His grandparents were the headman and headwoman of the hamlet.  He hadn’t seen them for several years. It would delight them, Norbu said, if we stopped in for a night.

I readily agreed, with one caveat: We couldn’t allow ourselves to be a burden. Eastern Nepal has scant resources, and the long winter was just ending. Food would be scarce. We’d brought rations of noodles and dried meat, and would cook for ourselves.

”But they’ll insist,” Norbu replied. ”You’ll be an honored guest, the first American to visit the village.”

”Well.  Please make sure they don’t overdo it.”

We arrived in mid-afternoon. Bala was an oasis of tidy, mud-walled homes, nestled between terraced hills. Corn and chili peppers hung from rafters. As predicted, Norbu was greeted like a returning moonwalker. I was the exotic alien he’d brought home. Kids ran over to stare at my nose, tug my beard, and pinch the strange fabric of my high-end expedition parka.

Despite my earnest and sincere protests, Norbu’s grandparents – a wizened couple who lived in Bala’s biggest house – insisted on preparing dinner. Norbu suggested, diplomatically, that I stay out of their way.

Supplied with a flask of the local millet raaksi, I climbed a nearby hill and watched the sun fall behind the foothills. The more I drank, the better I felt; soon I was feeling very good indeed. It was incredible that I should find myself in this remote Himalayan village, a guest of honor among the local tribespeople. Sometimes, on rare occasions, a traveler feels this way: that your entire life has conspired to bring you to this moment.

Time passed. I finished the raaksi. As the last rays of light scraped the clouds and faded from the sky, I heard the rhythmic ringing of a cowbell: the signal that dinner was ready.  I picked my way down the hillside, followed a narrow lane between stone walls, and found the house.

There was no electricity. The large single room of Norbu’s grandparents’ home was illuminated with yak-butter lamps. Villagers filled the low wooden benches placed along the mud-plastered walls. In the center of the swept dirt floor, facing the open-pit kitchen, was a single wooden chair, cushioned with a hand-loomed carpet: my place of honor.

I sat down, and the room fell silent. Norbu’s grandmother, wearing her finest Tibetan chuba, turned from the hearth and approached me. She carried a large copper tray, a traditional Nepali wedding gift. Upon the tray was a mountain of rice, served with fragrant daal lentil stew. She’d prepared a side dish of tarkaari — boiled greens and potatoes – as well as a small bowl of spicy achaar. I detected hints of cumin and timur, the tongue-numbing Sichuan pepper. Atop this already bountiful offering was a fried egg, a rare treat in these subsistence villages. But my heart nearly broke when I saw the crowning touch: a drumstick and thigh. The family had killed and roasted one of their few, precious chickens in our honor.

With great ceremony, Norbu’s grandmother set the heavy tray on my lap. All eyes were upon me. I looked around, giddy from the raaksi and the altitude. A hundred thoughts raced through my head: self-consciousness, fascination, a childlike astonishment.

Norbu, seated beside his grandfather, grinned at me. I grinned back. My head felt large and warm. What a place to be. And what were my friends in California up to right now? Eating breakfast? Sleeping? Watching “Hill Street Blues”? That world seemed so far away. Distracted, without thinking, I crossed my legs.

The copper tray overturned, and crashed to the dirt floor.

For an infinite moment, time stood still. The room was a tableau of shocked faces — none more shocked than my own. Had this unspeakable thing actually happened? Had my entire life conspired to bring me to this moment?  I leaped to my feet, incredulous, overcome with shame. ”Naraamro!” I cried, staring down at the steaming mess. ”Maaph garnus! This is terrible! I’m sorry!”

Norbu’s grandfather stood up calmly, and walked toward me. He placed a firm hand on my shoulder, and turned toward his stunned guests. ”Ramro chaa,” he stated calmly. ”It’s fine. It’s good. In fact it’s wonderful. Isn’t it?” He scanned the room. ”Isn’t it?” Tentatively, heads nodded. The guests began to breathe again.

Suddenly, I understood. Here I was: a fabulously wealthy Westerner, an emissary from the most powerful country on Earth. I’d blundered into Bala, and been greeted with reverence — even awe. But in truth I was merely a pale-faced kuhire: a foreign klutz who couldn’t hold his raaksi.

The Joan Osbourne song echoed in my ears:

With my oafish faux pas, I’d shattered the mystique. We were all equals now — no matter how much my Gore-Tex parka had cost.

I left the house, and found Norbu. ”What should I do? Do we leave now?”

”Are you crazy? Don’t even think of leaving. Go to your tent,” he commanded. ”And wait. They’re going to do it all over again.”

And they did — with one enormous difference. This time, we all ate together.

Jeff Greenwald is the author of several travel books, including Shopping for Buddhas, The Size of the World, and Scratching the Surface. He has written for The New York Times Magazine, National Geographic Adventure, Outside, and Salon. He also serves as Executive Director of Ethical Traveler, a global alliance of politically active travelers. Jeff’s most recent book, published last fall, is Snake Lake, a memoir of his experiences and epiphanies during the tumultuous year of 1990 in Nepal. For more on his travels and creations, visit his website.