When to Go on a Safari in Botswana: Green Season | GeoEx

Home » Wanderlust » When to Go on a Botswana Safari: Green Season

When to Go on a Botswana Safari: Green Season

I was 19 the first time I traveled to Africa. From the moment my feet touched down in Harare, Zimbabwe, Africa overpowered me and surpassed any expectation I had. I fell in love instantly, and hard. The sights, smells, people, animals—it was all unlike anything I had ever experienced. After six weeks there, I felt positive that no other African country could match the love I felt for Zimbabwe. Then I went to Botswana.

Here are seven reasons I fell in love with Botswana on a green-season safari:

I will shamelessly admit that I love less-developed countries such as Zimbabwe, Brazil, and Ethiopia. So when I read about comparatively developed Botswana prior to my trip, I wondered if I would like it less for this reason—how could it compare to the raw sense of adventure I had felt in Zimbabwe? Then I went to Botswana and discovered its extraordinary history. Prior to independence in 1966, Botswana was one of the poorest countries in the world. Flash forward to the current day: Botswana has the highest GDP per capita in all of Africa! The current president is also a well-known conservationist; poaching is almost non-existent and more than 40 percent of the country is protected land. Now that’s inspiring! The people in Botswana are proud of their country, and it shines through.

2. The Excitement of Seeing Animals Never Gets Old 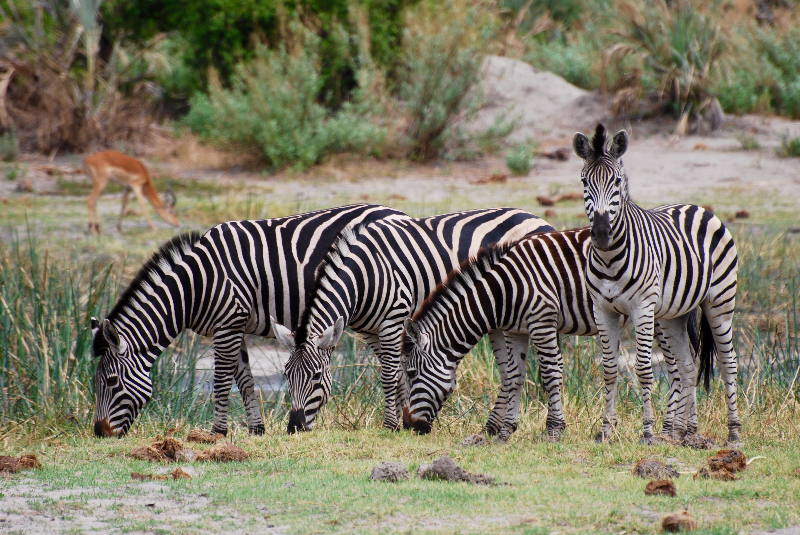 No one says, “I want to go on safari, but I’m not interested in seeing animals.” But having gone on safari before, I wondered if I would feel the same excitement spotting animals that I’d already seen. My aunt, also on her second safari, best answered this question when she spotted a leopard at Gomoti Tented Camp.

On our first day at Gomoti, our guide, Brooks, enticed us with stories of an elusive resident male leopard that had only one ear and was named Goose. (Why? No one knows, but it enhanced the leopard’s allure.) After spending two full days searching for this elusive Goose, we were all on high alert. Countless times we spotted leopard-like trees. 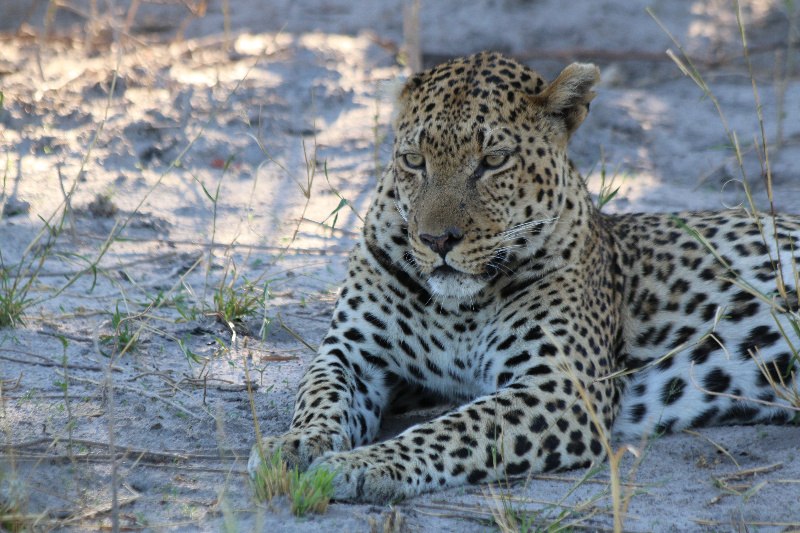 On our last morning, just as the sun was coming up over the mopane forest, my aunt suddenly started jumping up and down in her seat, so excited that she was unable to come up with any words. All she could manage to do was point her finger. We all started frantically searching for what had rendered her speechless—and then we saw him: the legendary leopard! He was casually drinking water, thoroughly unimpressed with our barely containable excitement.

So yes, animal sightings never get old. They just get better. 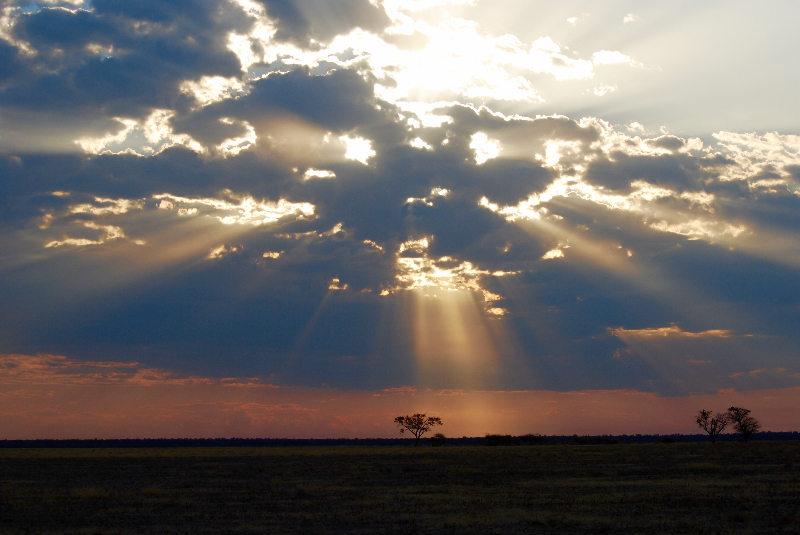 When people think of Botswana, more often than not they conjure up images of the Okavango Delta and its winding waterways. Before working at GeoEx, I didn’t even know Botswana had a desert, let alone a huge desert! But the semi-arid Kalahari has been around for 60 million years, dating back to when the continent was formed. And it’s home to the world’s second-largest wildlife park, the Central Kalahari Game Reserve.

Starting off our trip here was a blast! We saw unusual animals, such as honey badgers, and the sweeping vistas and savannah mosaics captured the quintessential Africa landscape we were all hoping for. Plus the staff was incredible. We all left with a soft spot for this magical place. 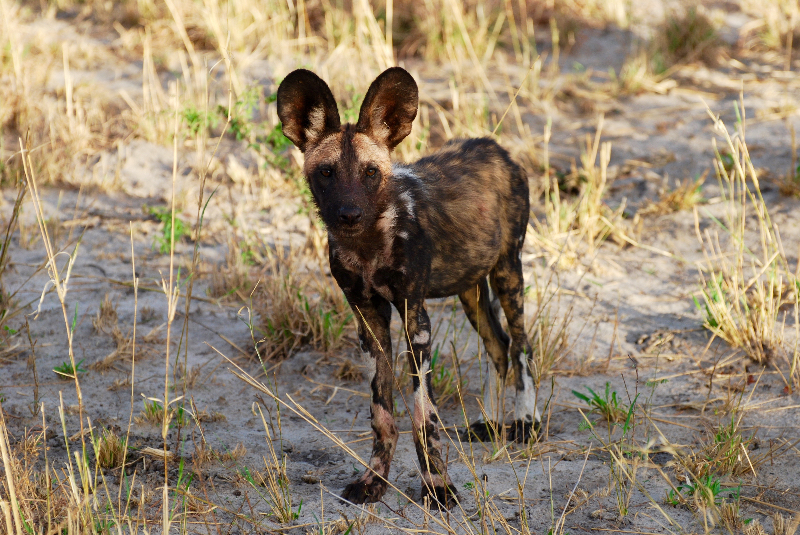 I have no problem saying that I have a favorite safari animal: it’s wild dog all the way. Well, last year it was elephants, and next year it might be leopard, but this is the year of the wild dog. Over our nine days on safari, we saw three different packs of wild dog and I still couldn’t get enough.

No sighting compared to seeing them on foot. As the sun was setting on our last night in the Okavango Delta, we decided to stretch our legs outside the vehicle and enjoy the sunset with a gin and tonic. Clearly wanting to get in the fun, a pack of wild dogs suddenly raced into the clearing—within 20 yards of where we were all staring with our mouths wide open. After lots of bewildered and panicked looks from my fellow travelers and me, Brooks assured us, “Everything is fine. Stay still and enjoy the experience!” And enjoy we did.

A safari in Botswana is an amazing experience whether you’re traveling with a group or taking a custom trip. I was initially nervous about traveling with a group of strangers, but this ended up being a highlight of my trip. There was something special about ending the day watching the sunset together and recounting all our favorite sightings. Reliving them that way doubled the pleasure. 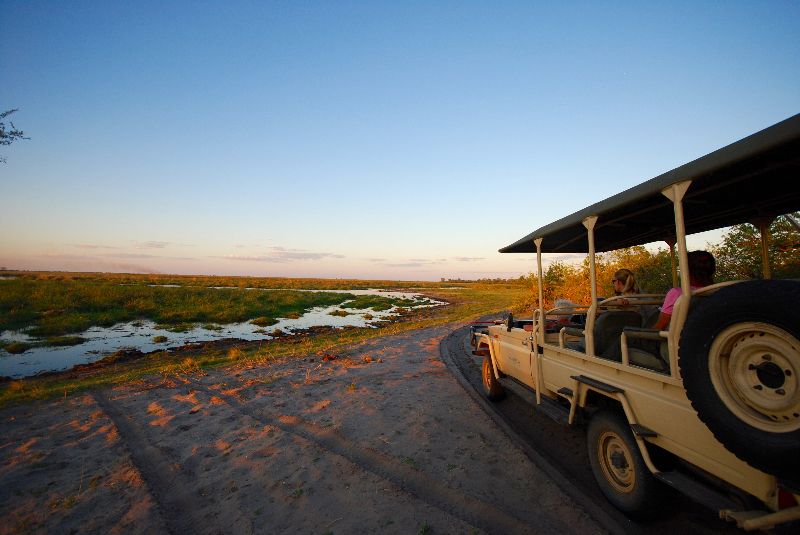 I’m unabashedly a “safari person.” You could stick me in an open vehicle in an African thunderstorm and I’d still be thrilled. Many people think they have to go on safari in the high season because that’s when “sightings are the best.” Well, I’m here to tell you that just isn’t true. I’ve gone on safari in high season, and I’ve gone on safari in green season. On the latter, the birthing of so many species makes for great predator-prey interactions and the fresh green grass draws out a variety of species. I’ve already mentioned my wild dog and leopard encounters, but there were so many more unforgettable sightings: elephant, giraffe, sable, civet, lion, hyena, jackal, and endlessly entertaining baboon troupes. The list goes on and on…. 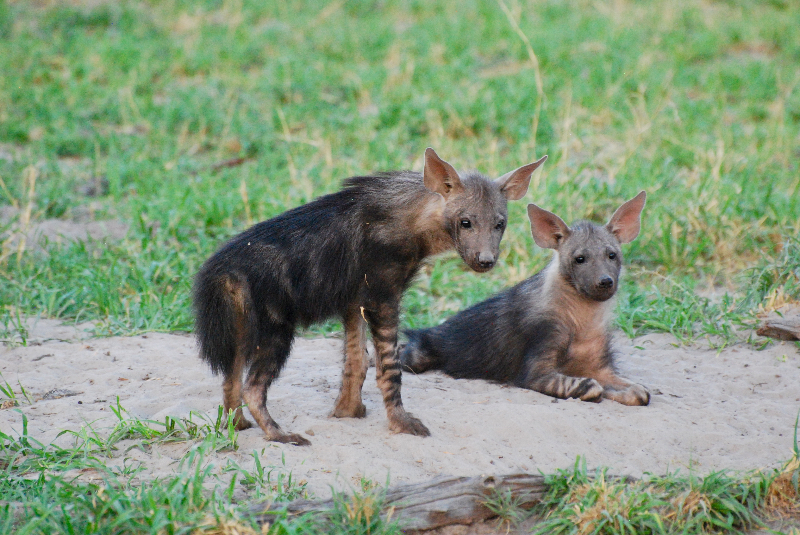 Everyone loves animals. And everyone loves babies. So what could possibly be better than baby animals? This is one of the green season’s best qualities. Lots of safari animals give birth during the green season in Botswana, which meant that from wild dog pups to spotted hyena pups to baby elephants to jackal pups, babies were everywhere! We even saw a baby impala no more than a few hours old! If one thing matches the excitement of seeing different animals, it’s seeing different animals in miniature, cuter versions.

At the last camp of our trip, Linyanti Tented Camp, we set out to find hyenas. Botswana is home to two different hyena species, spotted and brown, and both are found in the Linyanti Concession. After bumping along to the brown hyena den that Brooks had found the day before, we sat for a moment. Then three curious little heads popped out to say hello. We laughed as they wrestled with one another and inquisitively studied our vehicle.

As we sat taking pictures and enjoying their amusement, we noticed Brooks also had his camera out and was snapping away. “Brooks, don’t you see brown hyena pups all the time? You look like a paparazzi over there!” I said.

His response still resonates inside me. “I’ve been guiding for over a decade and I’ve never seen brown hyena pups at their den before. This is why I love Botswana: It surprises you when you least expect it.”

GeoEx’s Kim Keating has a passion for crafting unforgettable safaris for travelers. To learn more about GeoEx Safaris call Kim or another of GeoEx’s Africa aficionados at 888-570-7108. 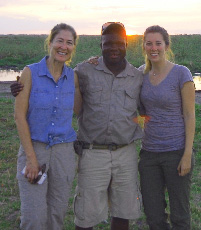