Home » Wanderlust » The Splendors & Surprises of a Trip To Iran

The Splendors & Surprises of a Trip To Iran 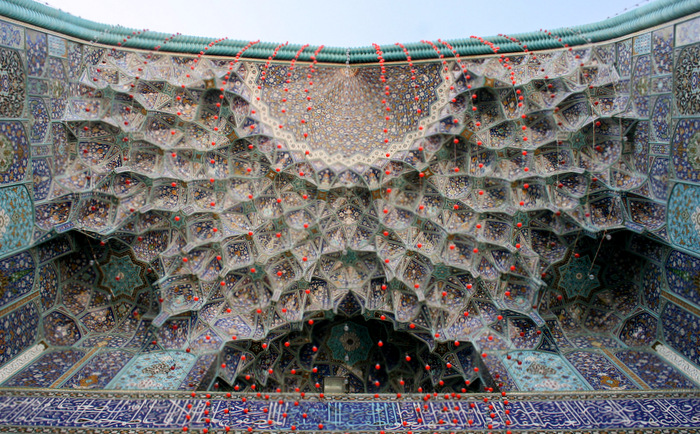 With the start of a new year, many of us are resolving to bring more kindness into the world, even to bridge the cultural divides that exist between many countries and people. Although governments and the media sometimes spread fear and distrust about nations that hold different ideologies, I’ve found over and over that I have more in common with the people in these places than differences, and that traveling opens minds and hearts in a special way. Iran is a great example, and this is a fantastic time to go there, with a new sense of stability on the ground and with visas currently being issued.When visiting Iran as an American, leave your expectations at home, as the experience is more than you can begin to imagine.

Prepare to Be Surprised

Everyone says you’ll be surprised by your trip to Iran (except for those who say, you’re nuts for going—and they’d probably be the most surprised of all). So when I joined GeoEx’s Treasures of Persia journey, I went in expecting to be surprised, but I still wasn’t prepared.

I was surprised by the red poppies bursting out all over the landscape, the snowcapped mountains where I’d expected desert, and the national commitment to mystical poetry and song. The most profound surprise of all was the genuine warmth of the people. Throughout my trip to Iran, from Tehran to Tabriz to the smallest village in the desert, people went out of their way to express appreciation at our visit. In Yazd, a restaurant owner went so far as to place an American flag on our table and blast “The Star-Spangled Banner” from the speakers, causing the other patrons to rise from their seats out of respect. Now, that’s surprising.

On our first day we visited the Golestan Palace in Tehran. Here our guide is explaining the life and times of Nasser al-Din Shah at his tomb in a quiet corner of the palace. The 19th-century Persian king was famous for his courtly visits to Europe, his (large) harem, and his assassination by a revolutionary in 1896. 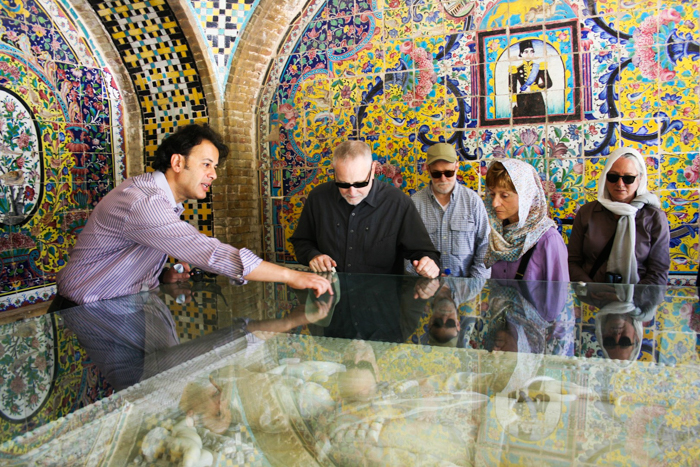 The palace was a pleasant surprise—an equivalent place in Europe would be overrun with tourists and selfie sticks. Instead, it was magnificently quiet; you could hear the babble in the fountains and the chattering of parrots overhead. 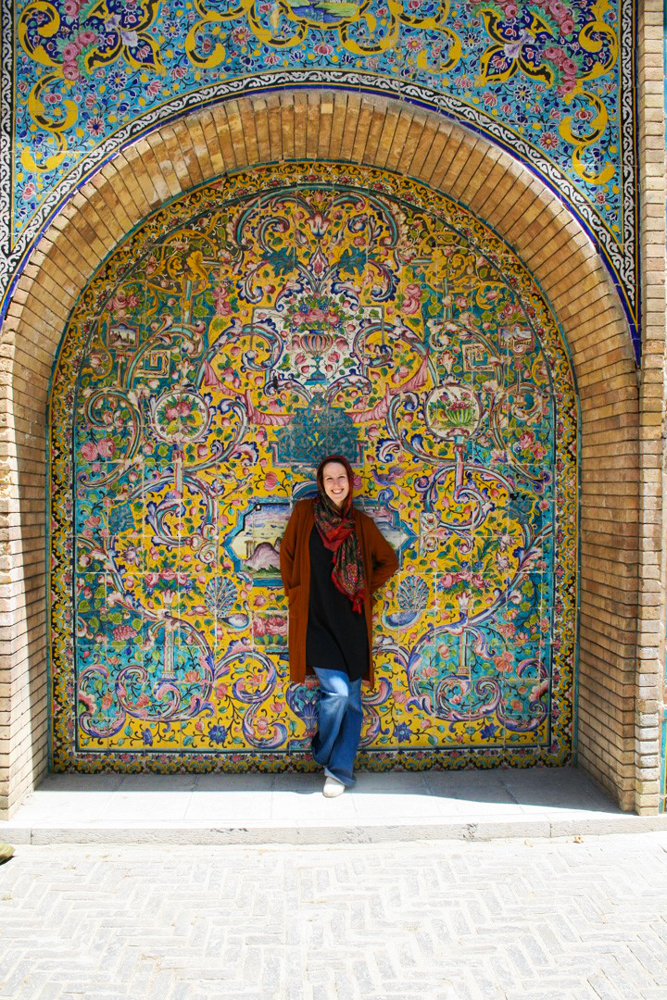 I had my picture taken by a young Iranian couple who were also strolling around Golestan, being tourists themselves. They were thrilled to see a group of American tourists in Iran touring their capital.

One thing that surprised me about Iranian cities was the fun public art. I expected to see lots of sober portraits of the Supreme Leaders, Khomeini and Khamenei, and yes, I did see those. But I didn’t expect colorful murals and whimsical sculptures, and I saw lots of those, too. I think the picture above is actually an advertisement, but it’s a nice reminder of how Iranian cities can be joyful places, not just somber ones. 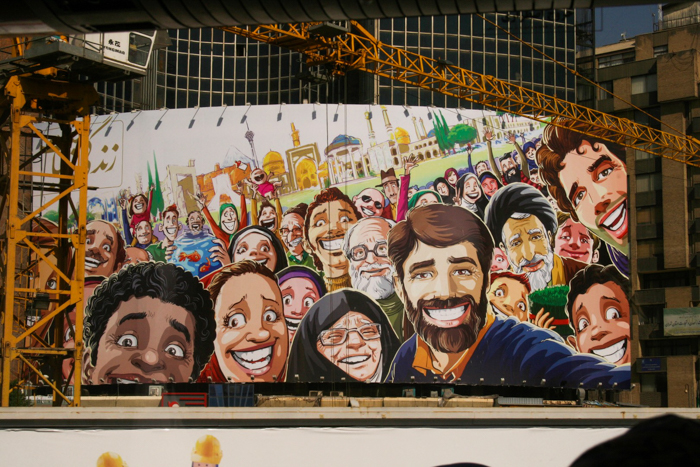 Iran’s Islamic architecture is dazzling, no surprise there. But there are other religions in Iran, and exploring sites sacred to Christianity, Zoroastrianism, and Judaism was a surprise highlight. Saint Stephanos Church is a long drive from the closest major city; perched just across the border with Azerbaijan, it holds court in a canyon of red rock that feels like one of the archives of time. 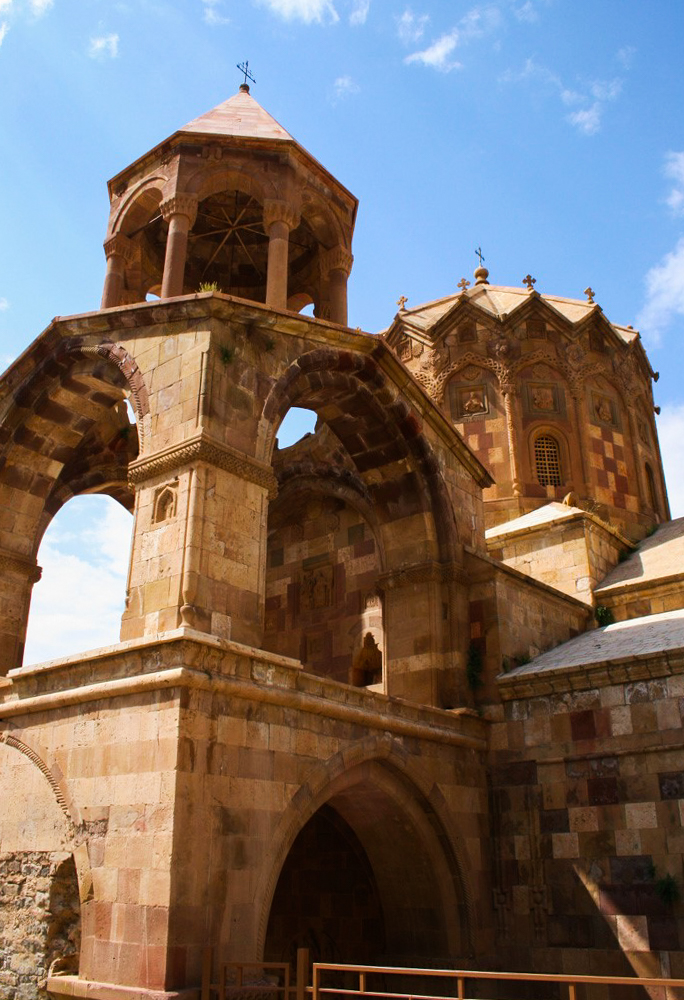 We visited Saint Stephanos on a weekend, and it was busy. At each corner and courtyard of the church complex, we were approached by people who wanted to welcome us and chat with us—or take their photo with us. Kathie is pictured here with a group of gentlemen who wanted to immortalize the visit. 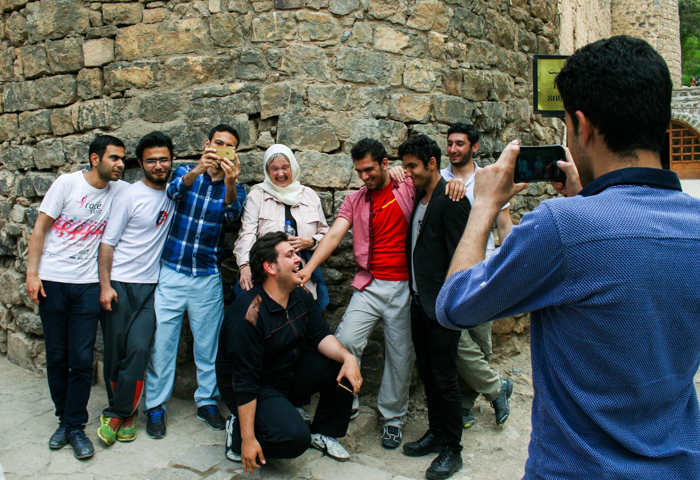 At first I was a bit skeptical as we walked up to Takht-e Suleiman, a windy mountaintop UNESCO World Heritage Site. We’d driven hours through mountain landscapes to get there, and as you approach, you can’t see much except the crumbs of ruins. But the opaque, blue-green pool in the center of the site, formed in a volcanic crater, brought into focus how magnificent and spiritual it was. 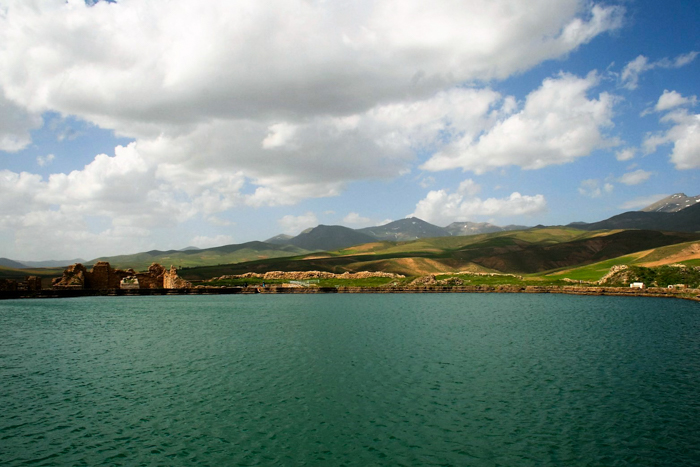 “One of the most sacred places in Iran,” our trip leader, Sylvie, said, and it was pretty easy to see why. 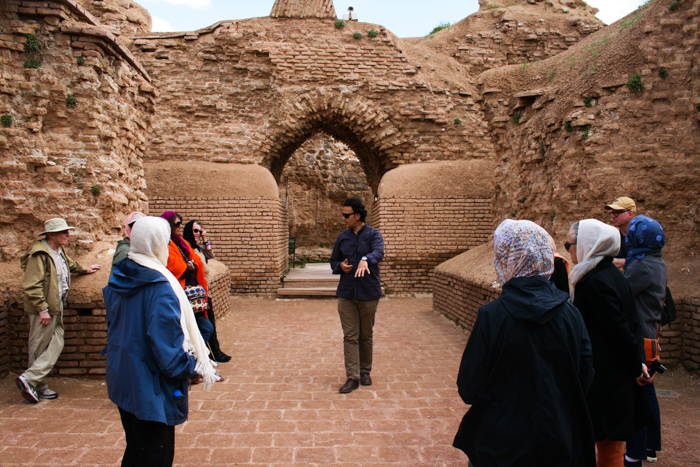 As with so many other places in northern Iran, we pretty much had the whole site of Takht-e Suleiman—all of its chambers, tunnels and temples—to ourselves to ponder and explore. Here, our national guide, Peyman, is explaining the Zoroastrian fire temple that once burned here. 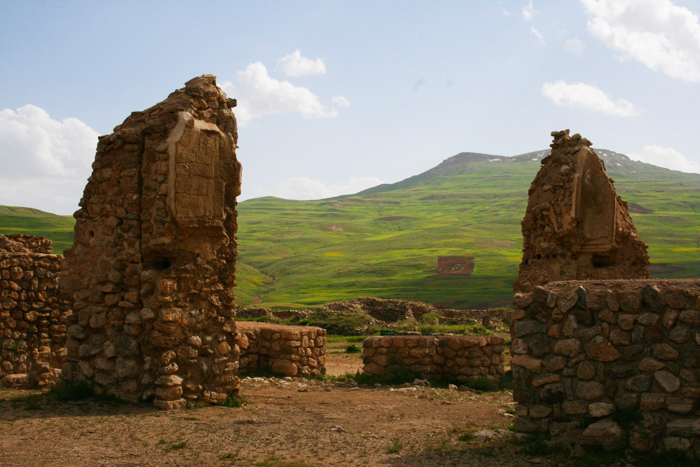 There was just one other group of tourists visiting the ruins at Takht-e Suleiman that day, an older couple strolling with a young man. The woman asked me to take a photo with her. After the young man had taken the picture, the woman squeezed both of my hands in hers and kissed both of my cheeks. I don’t think anyone has ever been so happy to take a picture with me in any other country I’ve visited. 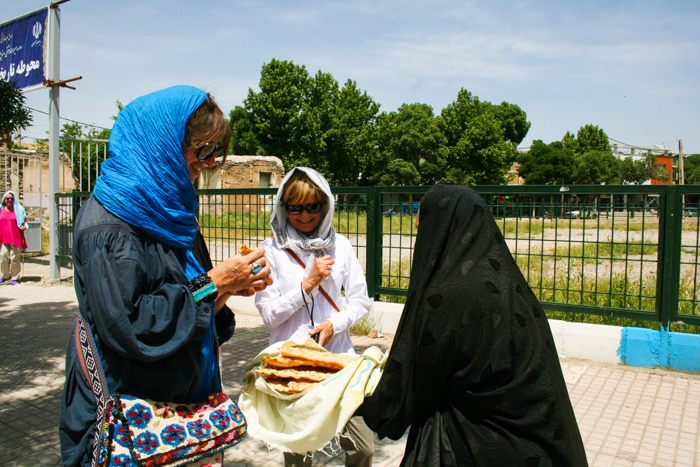 An Iranian woman in Kangavar offered warm bread to some members of our group. At first we declined, trying to adhere to the Iranian custom of taarof, which governs etiquette, but as you can see, eventually the aroma of warm bread overcame us. 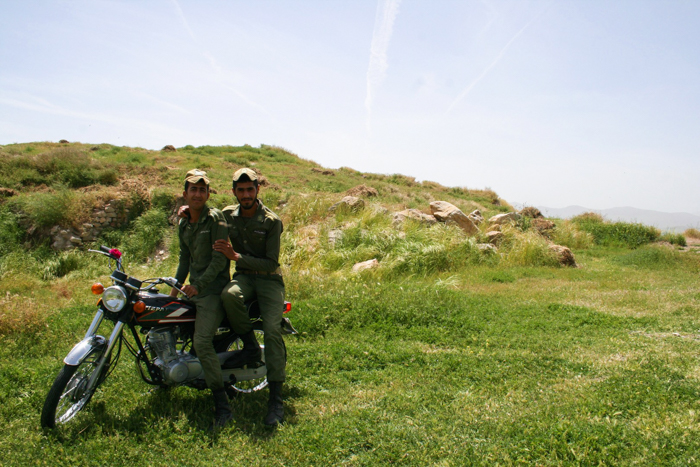 Military service is compulsory for most young men in Iran. These two soldiers serve their time as guards at the crumbling Anahita temple, a pre-Islamic ruin in the town of Kangavar, dedicated to the Zoroastrian goddess of water.

Persepolis! Ancient cities haven’t always been my thing—in the Roman Forum I was preoccupied by the scrawny cats begging between the columns—but this site is magnificent from the very first approach. 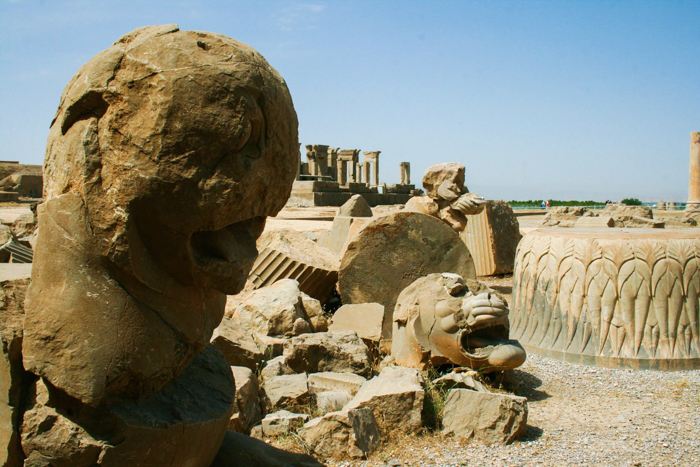 The city was a ceremonial capital for the Achaemenid kings, built on these tremendous stones that heave it toward the sky like an altar, and decorated with astonishing carvings and reliefs. It was more recently famous for being the site of the last Shah’s final big party in 1971, which lavishly celebrated 2,500 years of Persian civilization and provoked the outrage of then-exiled Khomeini. 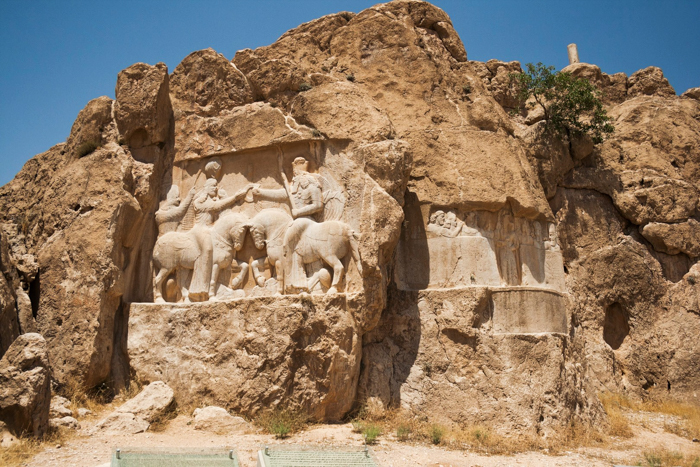 Naqsh-e Rustam is just five kilometers from Persepolis and also a knockout. This relief depicts the beginning of an empire: Ardashir, the first Sassanid king, is receiving a ring of kingship from the Zoroastrian deity Ahuramazda. The empire lasted four more centuries until Islam arrived in Iran.

The highway from Shiraz to Yazd follows historic trade routes, passing the same desert mountains as the camel caravans of previous centuries. 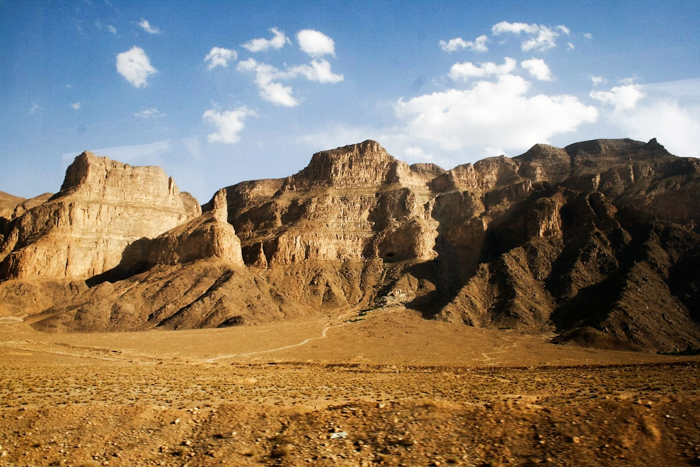 I’m posing here with a gentleman who has greeted travelers to the Towers in Silence, a Zoroastrian ruin on the outskirts of Yazd, for years—maybe decades. “Over the years I’ve come here, he’s gone through three different donkeys,” our guide explained, “but it’s always the same man.” 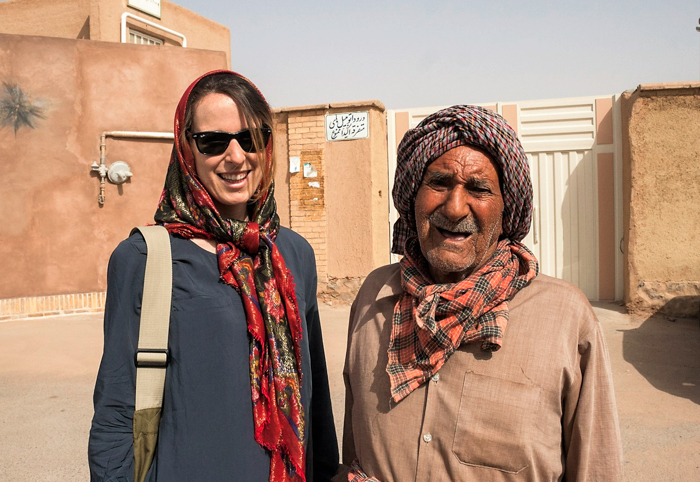 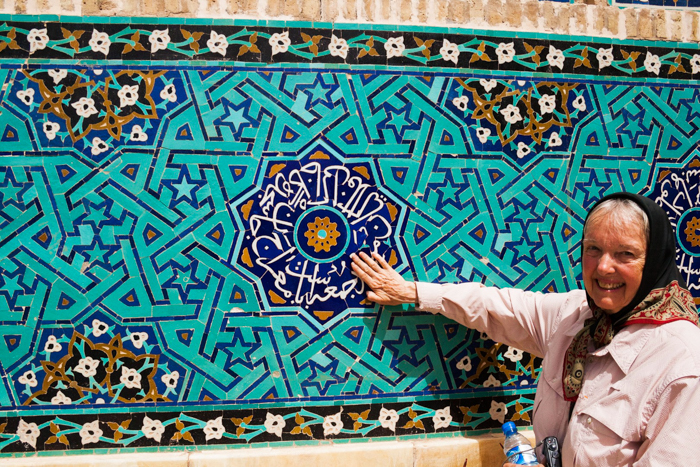 Only 20 columns support the ceiling of the Forty-Column Palace. The other 20 are created by the reflection in the pool at the entrance to the palace. 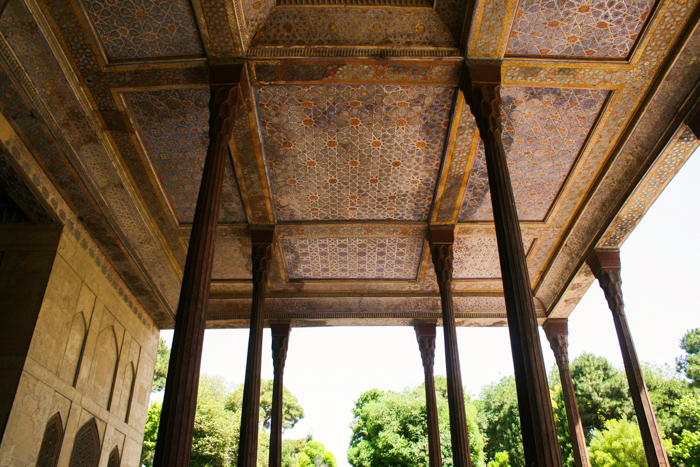 The Forty-Column Palace might have only had 20 columns. What it had in excess was mustaches depicted in its artwork and frescoes—an impressive variety. On the day our group visited, the palace happened to have a temporary exhibit dedicated to this mustache heritage, including a “make your own historical Persian mustache” station that we took full advantage of. 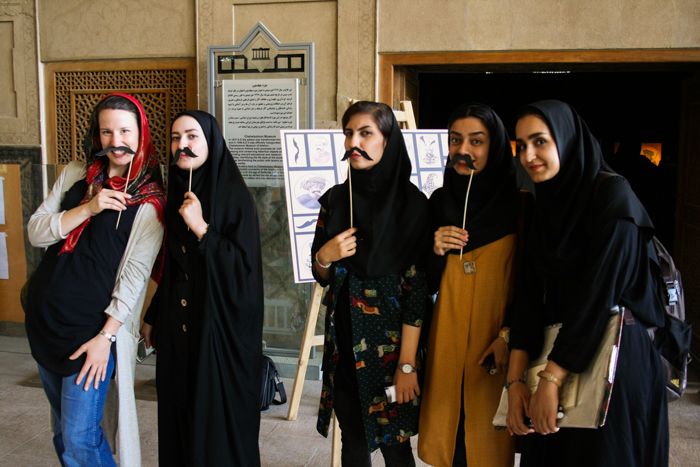 The exterior of the Imam Mosque, in Esfahan, is covered in ornamental red bulbs to honor the birthday of the Hidden Imam, a Messianic leader believed by some Shia to be living in secrecy among the people. 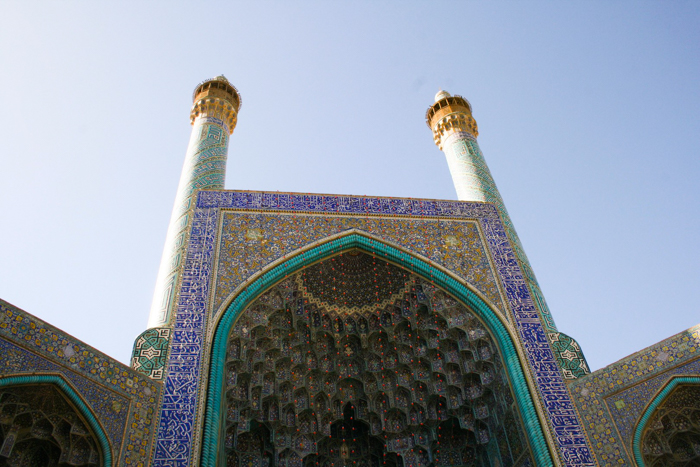 Lots of people have written about the beauty of the Sheikh Lotfallah Mosque in Esfahan. I am happy to confirm that they were all correct. It’s a masterpiece. The mosque was built in the 17th century as a private mosque for the women of the Shah’s family. The pious women were invisible while at prayer thanks to a long, curving hallway that twists away from the entrance doors. 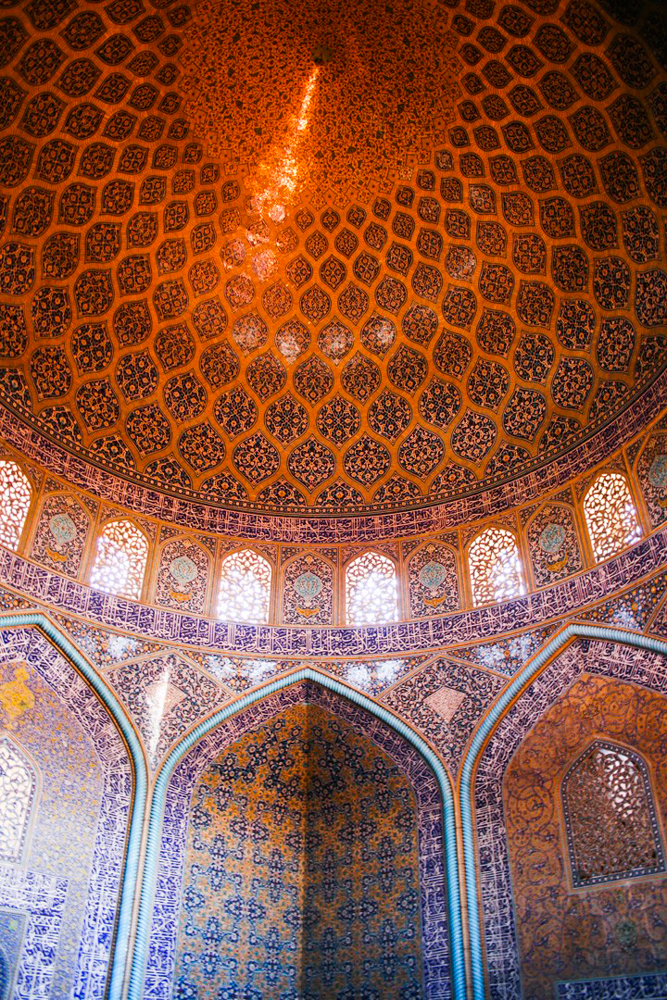 Hidden Gems During Our Trip To Iran

As our trip wound to a close, we stopped in the village of Abyaneh, in the Karkas Mountains north of Esfahan. It’s beloved for its historic red-brick houses and its fruit leather (it tastes better than it sounds). 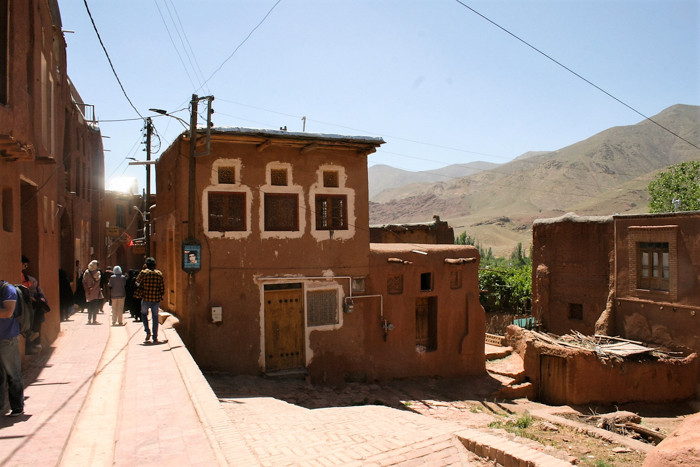 GeoEx’s Jessica Silber is ready to help you book your spot on Treasures of Persia, or plan your private trip in Iran. Give her a call at 800-777-8183 or email her at [email protected]

As per my experience Iranian people are secular to the core.Wherever I went no one asked about my religious belief they don’t bother about your religion, they only asked where do you come from.And they have highest regards and respect for foreigners. They will go out of their way to help foreigners. .Most of the people have great sense of humor.

Beautiful country and wonderful people.I traveled to Iran in 2000 and got lot of help love and affection from Iranian people.I wish I could travel again but now it is hard to get Iranian visa from Canada.