Home » Wanderlust » From Morocco, with Love

From Morocco, with Love 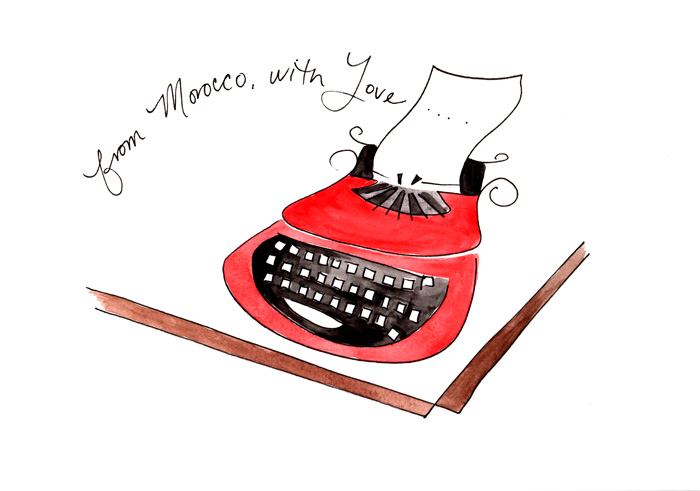 My love letter from the Sahara begins in Paris.

It is March and just after dark on the Île Saint-Louis. My friend Christina and I have arrived at a literary salon in a swanky apartment with high-beamed ceilings and low lights. The evening’s theme: letters written by hundreds of women a dozen years ago to a man featured as an eligible bachelor in Marie Claire.

The man is a Parisian installation artist. He kept the letters, and he has gathered philosophers, artists, and writers to fill this living room and engage in expansive dialogue about them.  About Love.  He tells us he will be creating an exhibit with the missives. He pulls them from his leather attaché case and reads excerpted declarations of desire and confessions of passion. The artist’s friend translates most of the conversation into English, shaping abstractions in the air with his long fingers.

The letters were written by hand in an era before the prevalence of texting and email, and the salon discussion—fueled by pastel macaroons and Champagne—traces the morphing shape of desire through the ages.

As the night progresses, the translator stops translating, the discussion heats up, and I wind down with the help of jetlag and a fading sugar rush. In the back of the room, I nod off, dreaming that Paris writes me a letter.

I would expect Paris to write a gray and rainy letter in the spring. But this week, she’s using blue-sky paper and puffy, white-cloud ink. After dreams of quills and inkwells, I wake up in the not-so-swanky room Christina and I rented in the 12th arrondissment, feeling inspired and hopeful. After a café au lait, I feel inspired, hopeful, and ready to reply to Paris…preferably after a trip to the patisserie.

We begin the long walk toward the Seine. We pause at Notre-Dame with croissants before crossing the Pont au Double to the landmark bookstore Shakespeare and Company. We climb the stairs, past the inviting spines of books and uninviting signs prohibiting cameras.

At the top, I stop. There, squished in the narrow, upstairs hallway stands a tiny booth with a chair, table, and typewriter inside. The booth’s ceiling is just high enough for someone to sit upright.

A single sheet of blank grid paper curls out of the typewriter carriage. I accept the silent invitation and squeeze my 6-foot 3-inch self into the little booth—not much harder than squeezing around the bathtub where we’re staying.

I type “Once upon a time,” but there is no ink left in the ribbon. I lean forward and can just make out where the keys hit the paper’s grid lines. Then I scan up the page. Goosebumps stipple my arms. Another, inkless writer typed a phrase just before my own: from Morocco, with love.

Of course, the letters are invisible unless you hold them about six inches from your face. I pull the sheet from the roller and show her.

She looks at the paper, then at me. She smiles. “That’s a good sign.”

Especially since we are on our way to Morocco to write.

I take the prophetic slip of paper with me.

If Morocco were to write me a letter, it would smell like the tanneries, taste like date milk with orange blossom, feel like the cool zellij tile around a fountain, sound like the evening call to prayer, and look like a donkey. 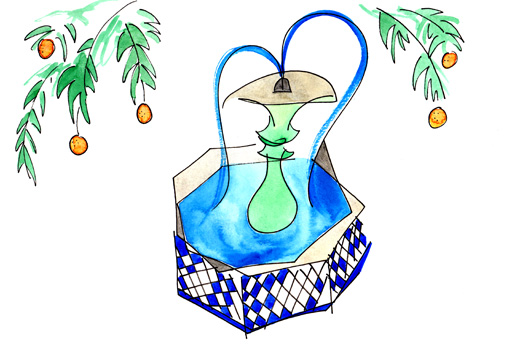 I should say: If the city of Fès were to write me a letter. 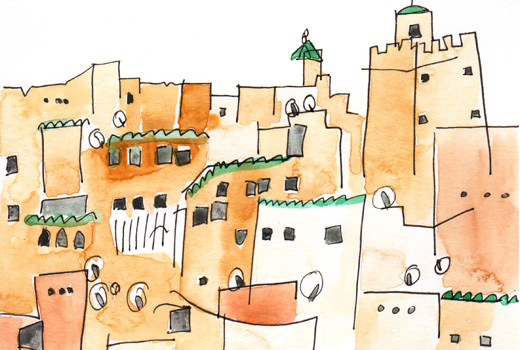 Dear Very Tall Madame,They say you should not have expectations when you travel. I disagree. Here are a few suggestions:

Expect small children to point at you and old women to frown.

Expect men to accost or ignore you, depending on whether they believe (and hope) in the stereotypes of
Western women or whether they are good men with wives at home.

Expect to wonder what the woman thinks, who sits all day, draping crepe-thin dough over a domed grill.

Expect to see the street drains run with the color the dyers are using the day you walk past, trying to keep your shoes from turning blue or black or red.

Expect to wonder whether the donkey feels the rash his saddle has caused or if his raw skin has gone numb.

Expect to feel a sense of timelessness when you stand on a riad rooftop, looking out over a city that has hardly changed in a millennium, except for the satellite dishes.

Did I say expect? I meant anticipate.

We meet a writer named Sid. He shares dinner with us, quoting poetry over revolving courses of bright vegetables served in small dishes. After a dessert of dates, we read poetry, write poetry, transform into poetry.

The week becomes words—words spoken, written, wrangled. Words sweet and spicy as oranges dusted with cinnamon. Words dark as unlit alleys at the base of steep houses. Words beating rhythm in time with the coppersmiths of Seffarine Square. Words energizing as spiced coffee. Words gathering like storm clouds over the Atlas Mountains and growing heavy enough to spill across pages and screens.

I begin to wonder how I will reply to this land.

When we head to the desert, Sid joins us. We three travel to Erg Chebbi—a cluster of buildings on the lip of the Western Sahara. From the terrace of Dar el Janoub, we can walk across a bit of hardscrabble, pass a line of palms, and stand ankle-deep in warm sand within minutes.

We’ve brought our sunglasses and poetry collections. We’ve also brought a couple of overlander Spaniards we found along the way. We ran into them two days in a row, while stopping for lunch on the road from Fès. The two friends—both named Juan and dressed in safari gear—have loaded their Land Cruiser with Rioja and carry it discreetly around this conservative country in a goatskin canteen.

We are all thrilled we found each other.

“Destino,” says one of the Juans, clapping his hands.

In the late afternoon, we climb into their Land Cruiser and drive to a nearby village, where local musicians play Gnawa songs until the sun begins its long descent into sand. On the return drive, the vehicle’s shadow stretches the length of a palm tree across the desert. We are invisible inside it—invisible until I look closer and see our narrow silhouettes laughing in the window frames.

Back at the hotel terrace, Sid pulls out a bilingual collection of Pablo Neruda, and Dos Juans solve the slight language barrier; with rosy bottles of Volubilia Gris, we take turns reading the poems in Spanish and English. Though no one says it, we know this gathering of five friends and strangers is travelers’ magic, found at the coordinates of openness and grace, and guaranteed to grow our hearts.

Later, as night deepens, we walk out to the crest of a dune to watch the stars. Sid quotes an ancient Urdu ghazal:

What is the second step of desire, Oh Lord?
Already with the first step,
I have reached the desert of possibility.

“Destino,” one of the Juans says again.

Nothing, says the other, as he walks out into the night.

And then there is silence, because nothing more should be said in a place of every possibility.

I keep waiting for a letter from the mellow desert—so unlike Fès, who’d slapped one to my forehead upon arrival.

When dawn shoots across the dunes the next morning, I am already walking toward the sun. For this, I have to be alone.

I stand still as the crescent shadows shift. I stand until I hear the desert start to speak—to write—through me. It is a brief but lifelong letter, and I sign it in the cinnamon sands with the valediction I’d already received: from Morocco, with love.

When I look up, our letter rises all around—dune after dune in every direction; I’ve walked until the entire horizon is arcing sand. 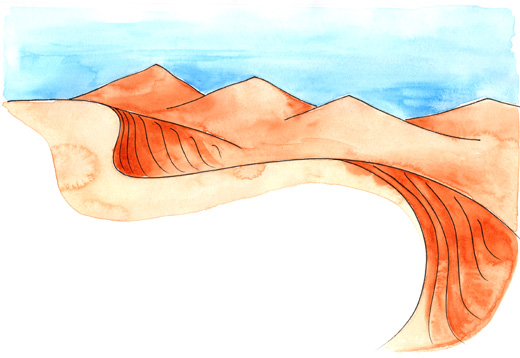 I see what the women in France had wanted when they wrote to a man they did not know.

I see that receiving can be its own reply.

I see the heart of every letter, every language: the desire to connect—across humanity, landscape, and time—with something beyond words.

To explore the options for discovering Morocco, call GeoEx destination specialists at 888-570-7108.