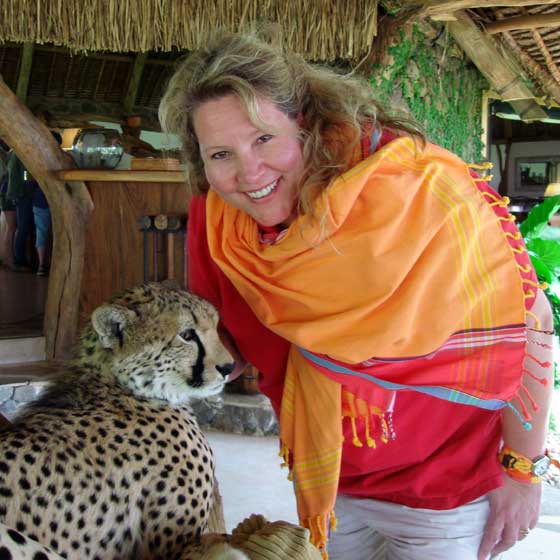 Sleeping atop remote Mt. Nyiragongo in the Democratic Republic of Congo is just part of a day’s work for Kate, who arranges otherworldly adventures that few travelers have even considered. She contends that, literally and metaphorically, sitting on top of the mountain provides the best perspective on the world below. She’s been honing her craft for decades and exults in each new challenge, earning her such accolades as a Condé Nast Traveler Top Travel Specialist for nine years running.

Kate designs exclusive travel that doesn’t stray into elitist tourism. She’s set up soccer matches for families with local schoolchildren. She’ll schedule a privately curated tour of Johannesburg’s premier contemporary art galleries followed by a foot tour of street art. “The benefit of working with travelers repeatedly,” she says, “is that they become friends who trust me to extend their comfort zones.” She has been leading GeoEx’s customized journeys team, and today with GeoEx Premier Access, attends to the most exclusive private travelers.

Kate’s mission is to tailor every trip to meet and exceed the dreams of each client, providing unparalleled experiences, such as:

A History of Excellence

Shortly after joining GeoEx in 1989, Kate led one of the first groups of top executives to visit China after the Tiananmen Square protests. In 1992 she helped launch GeoEx’s Southeast Asia programs when Vietnam and Cambodia were just opening for tourism, and in 1996 she spearheaded the launch of Africa offerings in seven countries. Overseeing the Africa team, Kate established GeoEx’s presence on the continent, created best practices that have become a model for other operators, and designed compelling, action-packed itineraries in uncharted expanses.

The daughter of a world-renowned biochemist, Kate first observed a person’s power to affect global change when, as a teenager, she attended a global health conference with her father. “The most rewarding facet of my work is when guests are touched and transformed in the field, for example, when they emerge from trekking to see gorillas in DR Congo’s Virunga National Park inspired to aid conservation efforts there.”

Kate has long been working closely with the Disney Company, managing numerous international location expeditions in Nepal, Bali, and East and Southern Africa for the creation of Disney World’s Animal Kingdom, as well as other projects.

“Kate catered our trip to exactly what I wanted….excellent recommendations.” – Ginny C.

Travel is different now.
JOIN OUR LIST
Get the latest intel, insight, and inspiration from GeoEx delivered to your inbox.