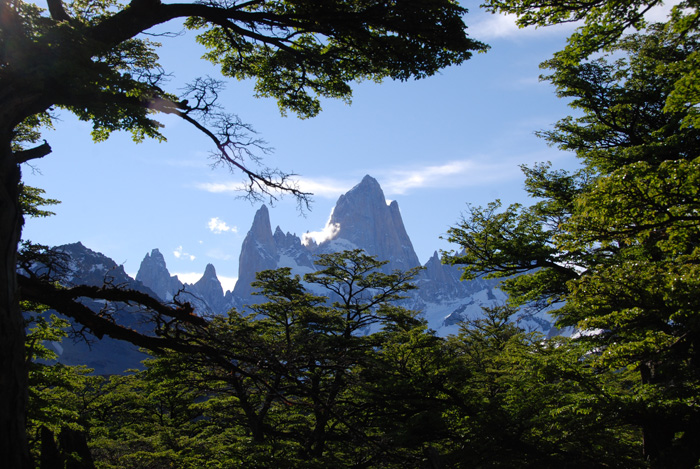 On the day that I drove in to El Chalten, Argentina’s trekking capital, the gateway to Los Glaciares National Park, the weather was so perfect that all the peaks one could hope to see on a visit—Cerro Torre, Guillaumet, Mermoz, Poincenot, Rafael Juarez, Saint Exupery, De L’s—were visible from 100 km away, laid out in full relief before a blue bird sky. Mountaineers, climbers, and mountain lovers have come to El Chalten only to see nothing of the iconic range that towers over it, the peaks completely socked in by clouds. I love mountains, particularly sheer, vertiginous, dramatic ones; they give me a potent mixture of intimidation and excitement that is a key element of my lifeblood. So I should have been reveling in my extraordinary fortune, my heart bursting at the overwhelming beauty. Instead, I looked at this postcard-perfect scene and felt it to be surreal, impersonal; I needed to get closer to the peaks. 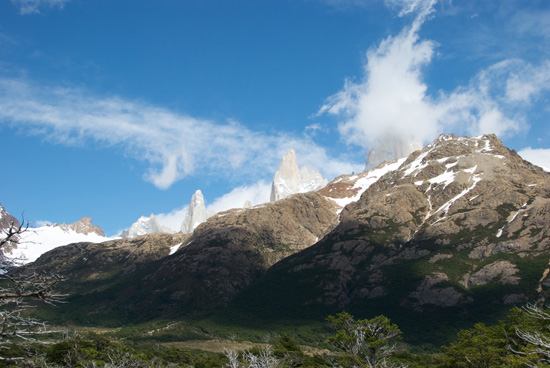 The hike to Laguna de los Tres gets you as close to the Fitz Roy range as you can get as a day-hiker, and is a non-trivial 14 miles round-trip from El Chalten. I left at 8 a.m. and drove along the mile-long stretch of paved road through El Chalten, adorned on both sides with small businesses: Mathilda’s for sandwiches, Waffleria for waffles and hot chocolate, Yaten for a massage, Prana for a vegetarian meal, and more. The buildings are all one or two stories tall, with painted signs and bright exteriors providing a cheerful burst of color in the floor of the valley. At the north end, the road turns to gravel as it skirts the Rio de los Vueltas river and points you towards the snow-covered, broad peaks far in the distance. As the car skirted counterclockwise around a ridge of peaks, the perspective shifted and allowed Fitz Roy, Poincenot, and Madsen to come into sight, the light catching the iron blush on their granite faces. I turned onto a road thickly enclosed in shrubs and beech trees before coming to a stop at the Hosteria El Pilar hotel. Inside was a crackling fire in a central wood-burning stove, lace half-blinds over the windows, and big, old wooden floorboards. The cozy interior tempted a casual morning of coffee and chat, but there was a larger objective afoot. 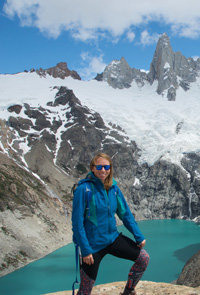 I started out in the forest on a steady uphill. The beech trees created a thick mosaic canopy that shielded the view of the mountains, creating a game of hide and seek with the peaks, as I craned for a view at every small opening. At the first mirador, or vista point, I could see Fitz Roy drifting amidst a wispy cloud, while Poincenot stood clear and bold to its side. From this perspective I could see the glacier that cascades down from Mount Madsen, perching improbably on steep slopes, seeming on the verge of calving and tumbling down in truck-sized chunks of ice. After an endless, gradual ascent, I came across mercifully flat terrain, a brief respite before the switchback that loomed ahead. The trail grew progressively steeper with each switchback until at times it was just tumbles of cascading rocks that were flat enough to step on. My muscles got tighter with each step; a man twice my age carrying a baby on his back passed me. The sun was shining and I focused on the pale, sandy gold granite under my feet and continued to climb at my slow pace. 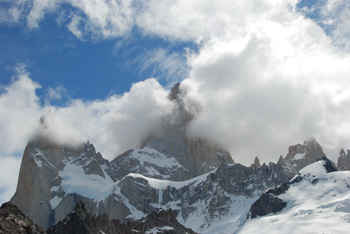 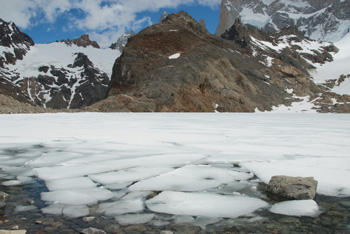 A final broad, steep hill gave way to the crest that looks onto Laguna de los Tres. Fitz Roy was totally obscured in thick clouds and I couldn’t help but feel, after all the miles and switchbacks I had just put behind me, disappointed. Giving patience to my own mountainous expectations, I reveled in what I could see: Madsen was blanketed in snow, its dark, craggy peaks jutting out at the summit. Laguna de los Tres was iced over, the edges cracked away to reveal perfectly clear, still water with rocks frozen in place. The southern peaks of the range were all visible, rising from layers of snow and ice at their bases that looked as if they’d been frozen in the midst of movement; every now and then bits of ice would actually give way in thunderous cracks followed by cascades of debris that would splash into the lake below. That lake was the richest aquamarine color I’ve ever seen, so saturated that it looked like if you submerged a foot, the color would drip off your toes. The climbers approach to the Fitz Roy range was still completely blanketed in snow, and you could see the zigzagging footsteps of those who had ventured to climb the peaks. After taking in my surroundings, I sat on my perch watching Fitz with anticipation, waiting for the clouds to part. There was much to feast my eyes on, but I wanted to see the big tombstone-like face in its entirety, as close as I would get…at least on this trip. 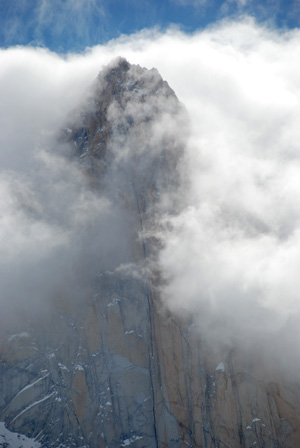 Clouds had been toiling and roiling over and around the peak since I had reached the laguna. They curled up and down and over the peak, caressing it, avoiding it, descending upon it, and then rising again. It was a tumultuous dance of current that could not be pinned down to moving one particular way or another. With no warning, Fitz suddenly emerged framed in pillows of clouds, grand and mysterious, and then quickly disappeared once more. Knowing that I wouldn’t have the gratification of the sky parting and granting my perfect view and photograph in just a few minutes, I found an ergonomic rock and reclined there to watch the scene unfold, hypnotized by the game the clouds played.

The movement was endless, unpredictable, and cast the peaks in different lights and angles. Fitz was majestic in its brief appearances from the clouds; one moment they would encapsulate the peak in entirety and the next they’d rise, making it look like it was being delivered from the sky. My disappointment at the clouds dissipated as I realized that they were revealing more than they were obscuring. They were unveiling the peak piece by piece, and by doing so, allowed me time to study each element: the stark line of Fitz’s north slope, the very cap of its peak, the east-facing slope with a dark crack cutting through it, the precipitous drop between Fitz and Poincenot. The rays of sunshine that intermittently burst through the clouds illuminated the blue of the crevasse in the ice field, the splashes of burnt orange iron on Fitzs face, the uneven crest of the peak, the water dripping down in dark fingers, the gloss of the snow fields, the reliefs and cracks in what had first appeared to be sheer, polished granite.

I hadn’t moved an inch in hours, yet I had been taken on a journey of light and shadows, my sense of awe rising and falling in rhythm with the clouds. The crowds around me dispersed and a red fox came to look for scraps left by the tourists and finally it was quiet in this mountain sanctuary. I rose at last to start on the long hike back, but now instilled with an infatuation for these mountains so great that I was scarcely able to turn away. For the seven miles home I would frequently stop, turn around and gasp, my heart bursting with the overwhelming beauty. 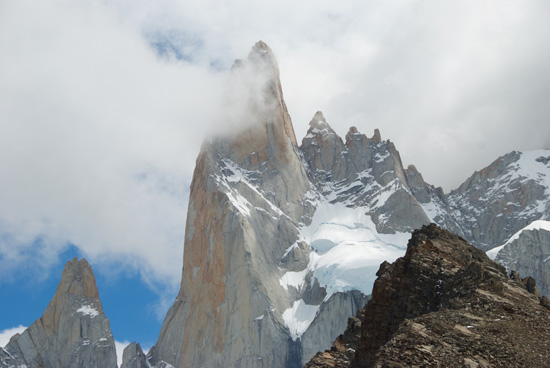 Discover your own majestic journey to Patagonia with GeoEx. 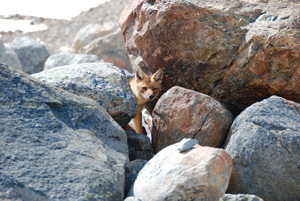