Home » Wanderlust » Finding Myself While Teaching Abroad in London

Finding Myself While Teaching Abroad in London

I wasn’t supposed to be in London.

I was supposed to have a baby. He would just be starting kindergarten by now. He would be learning to write, making new friends, dipping his feet into the Pacific for the first time. He would be lighting up my life. But after four years of doctors, tests, and counseling and five rounds of IVF, he never came into being.

I was used to trying hard to get things. My New England roots had nurtured a work ethic that allowed me to get a tenured English teaching position, run marathons, save enough money to travel the world. But no matter how hard I tried at having a child, my body just wouldn’t respond. The doctors said something about my ovaries just not getting fired up. What do you do with such words? No one tells you how abandoned you’ll feel by God, by the universe, by whatever luck allows some people to have what they want and not others. I felt like I’d failed my husband, my family, and myself, and no amount of work would make it right.

After years of mourning this dream to have a child, I pursued, or perhaps escaped into, another dream: to teach a Campus Abroad summer course in London. Trying to resurrect some life in myself and in the world. 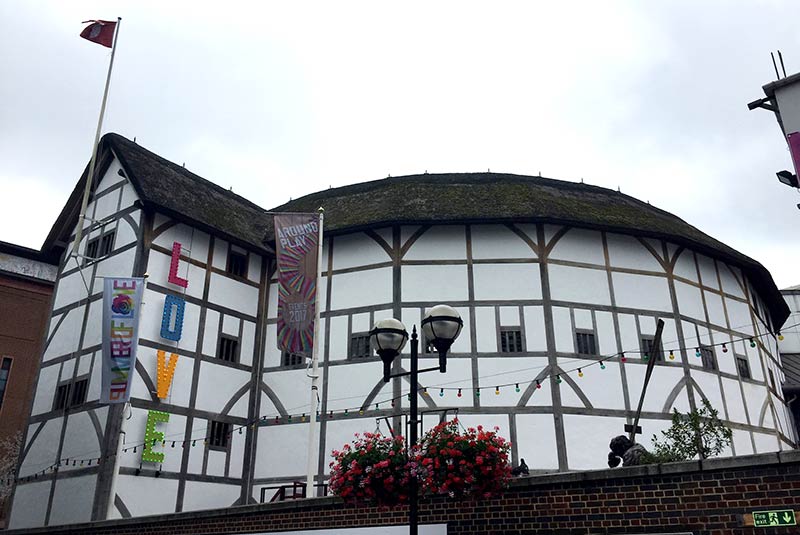 In the summer of 2017, I, along with my co-teacher Anthony and 23 students, lived and breathed British literature for four weeks in an 18th-century London building, replete with fireplace, chandelier, and floor-to-ceiling windows overlooking Bloomsbury’s Bedford Square, right behind the British Museum. Most of these first-generation California community college students had never been out of the state. Now they felt like posh literary characters fleshed from a Virginia Woolf novel. In the afternoons we walked the town, gawking over the glass of the dim-lit 1623 Shakespeare First Folio, smelling Charles Dickens’ mahogany writing desk, tasting the thick, clotted cream smeared on scones à la Austen. The students ate every morsel, washing it all down with warm, milky tea.

On one of our final days, we found ourselves crammed on the wooden benches of the Globe Theater for a performance of Much Ado About Nothing. We had the worst seats in the house. Half the stage was completely out of sight and a three-foot-wide wall of a column loomed right in front of us. In true 16th-century fashion, we would be hearing the play more than seeing it. One grumble after another arose from the disgruntled students. Much Ado About Nothing indeed. 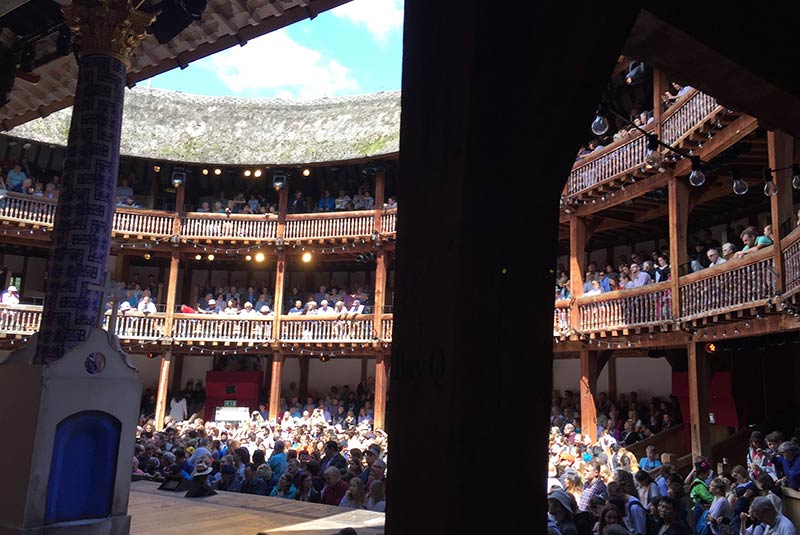 But when the orchestra fluted tunes of anticipation and the groundlings applauded for the first act, I glanced at my students. Expecting the expressions of ennui and annoyance that were all too familiar in the classroom back home, instead I saw them suddenly transfixed, eyes wide, beaming smiles of wonder and delight. As the play progressed and the dialogue that had been simply static words on a page was brought to life, they grew more and more animated as well.

At intermission, we all stretched our legs, and Anthony and I munched on local cheddar and sipped pints of Fuller’s Ale that we had packed in my purse picnic style.

“How did we end up here?” I said to Anthony as I stared up at the mystical paintings on the ceiling of the stage, then over the theater’s thatched roof into the overcast London sky.

Just then, Shimin, one of my meeker and more reticent students, approached with a suitcase-sized backpack hauled over her shoulder.

“Sorry to interrupt, but I’ll have to leave early to catch a flight to Barcelona for the weekend. I know I have my presentation on Pride and Prejudice with Emily Monday morning, but I might be a little late if my 6 am return is delayed.”

“Have such an amazing time!” I replied. While I would usually be concerned if a student was dismissing classes and assignments, now I couldn’t help but be proud of her adventurous spirit. I remembered my own first study abroad experience in Cambridge, England, and how I had attempted a whirlwind day trip to Paris before there was the Chunnel or cell phones. I almost got off at the wrong train stop, could barely speak French, and ate my way through patisseries where I could just point. I had never felt more alive. It was as if a light switch had been turned on inside me, and I was so excited to see Shimin light up as well.

As the trumpets signaled the second half of the play and we all filed back into our seats, Anthony counted heads. “Where’s Sean?”

“Oh Lord, here we go again,” I said. Sean was known to wander off on our walking tours or slip out stealthily during a museum visit, so I assumed he had left and was concerned he wouldn’t be able to complete the play analysis due the next week. But about thirty minutes later, Anthony elbowed me, pointing to the center of the standing-room-only crowd. There Sean was, belly laughing, braces glimmering in the open air. The same Sean from Taiwan who had been struggling to understand Shakespeare in class was now swept up by the performance, shoulder-to-shoulder with everyday Brits, fellow fans connected in the raucous chorus of sheer joy. Anthony and I looked at each other in disbelief and started laughing as well. 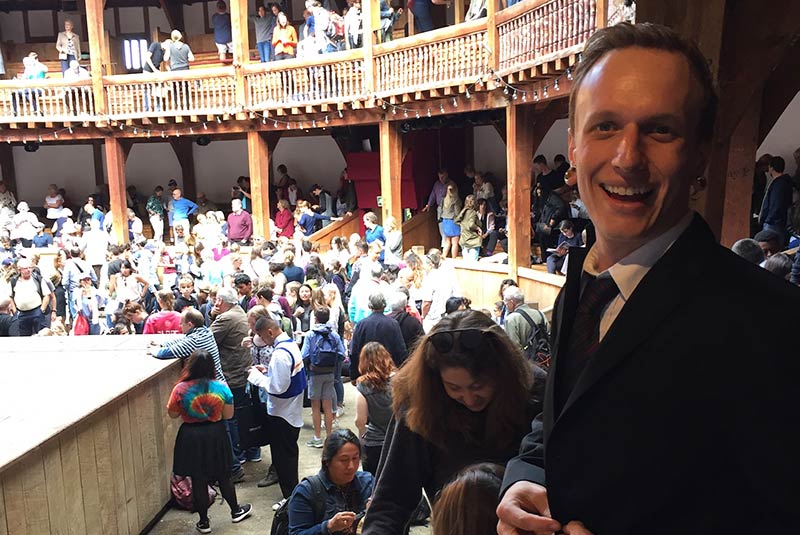 The climax of the play hit a crescendo, and the whole audience fell silent. I held my breath as poor Hero was rejected at the altar, accused of being unfaithful to her betrothed Claudio. Even her father abandoned her when he thought she was impure, calling her “a rotten orange.” I knew her pain all too well. After so many years of being prodded and pricked and poked, I too had been deemed rotten. My husband, wanting a fruit more ripe and fertile, decided to pick from another tree. Sometime after we parted, I heard that he and his new wife were expecting; the news left a sour taste in my mouth and stomach for years. But Hero “dies to live” and in the end is redeemed and resurrected.

As the misunderstandings and miscommunications cleared and Benedick ended the play with “Strike up, Pipers!” the orchestra boomed a triumphant blast of musical sunlight. We rose from our seats and erupted in applause, our palms turning sore as we elicited bow after bow from the actors to all sides of the theater.

Michael, an arty English major with quarter-size holes in his ear lobes, turned to me, his excitement almost bursting the suit and tie he had packed just for this occasion. “This has been the best week of my life,” he said.

The best week of his life. I let each word sink in to my body.

After a pause, I replied, “I saw King Lear at the Royal Shakespeare Company in Stratford when I was your age. I cried when Lear rediscovered his daughter Cordelia in the end.”

Rediscovered his daughter: Those words reverberated within me. Maybe, I, too, was rediscovering the child I had so longed to have—right there in front of me, in the spirit of Michael and Sean and Shimin and all my other students.

More importantly, perhaps what I was truly rediscovering was myself. In a flash, I realized that I had wanted a child to stave off my mortality. My eventual death would mean no longer being on the planet, and I had believed that having a child would leave some sort of legacy of my existence in the world. I would not just die and be forgotten. 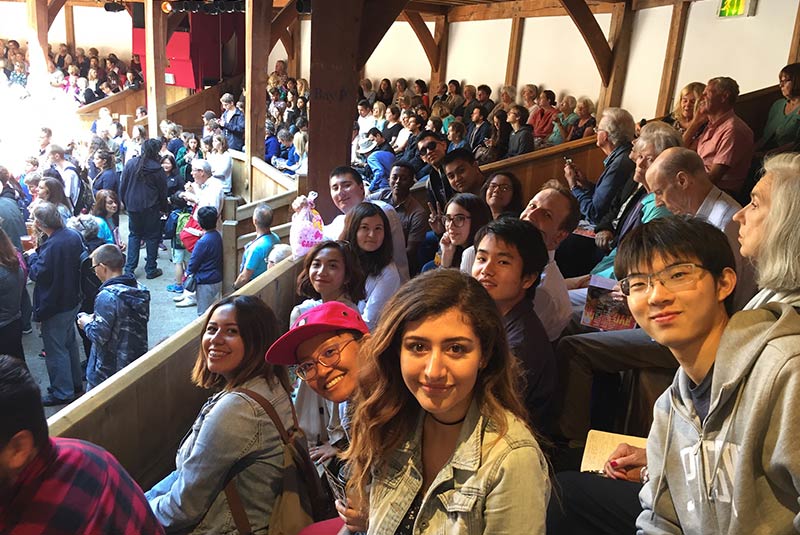 But suddenly, in that moment in the Globe, I began to understand that the only way to counteract death is to truly be alive today, to live every minute to the fullest, to see the world, to connect with another, and in that way to light up inside.

As the audience began to exit the theater, I took a deep breath, felt the weight of my feet on the wooden planks, and looked up into the now clearing London sky.

And then it hit me: I was exactly where I was supposed to be.

If you’re interested in setting out into the world and connecting with people in other countries, explore GeoEx’s captivating travel destinations or give us a call at 888-570-7108.