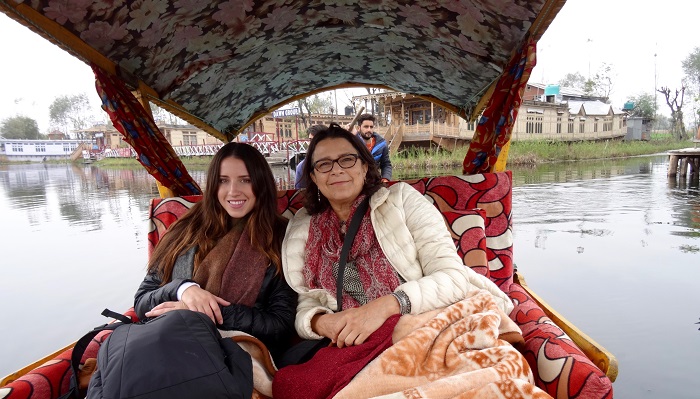 GeoEx Asia expert Sara Barbieri recently returned to India on a scouting trip, but this time she was joined by her 23-year-old niece. Together they traversed the length of the country, from Kerala in the far south to the Kashmir Valley in the far north. Sara shares impressions and photos, and reflects on seeing India through her niece’s fresh eyes.

It turned out that my niece, Samantha, had been dying to go to India. “It’s not a typical place like Europe,” she effused. “The culture is a world apart from ours.” Sam had never been to Asia, let alone on such a crazy, jam-packed itinerary. So off we went, my 23-year-old niece and I. Door to door, it was a 26-day journey/adventure/preposterous undertaking that I would do again in a heartbeat. We experienced such joy traveling in India. Sam embraced every experience, allowing herself to be enchanted and sharing her infectious smile—thereby enchanting those in her path. Her auntie was so proud.

Swept Up in Kolkata Colors

We began in Kolkata (one of Sam’s favorite places on the trip—mine too). It was 6:30 a.m., but we were up, bright-eyed and proverbially bushy-tailed to follow our guide Manoj into the yellow and orange swirling chaos that is the Kolkata flower market. From the moment we stepped out of the car, we were swept up in a stream of vendors carrying enormous loads of marigolds and other blossoms. Sam wondered aloud if one of the flower-sellers would adopt her so she could sit with them and be part of the glorious frenzy. 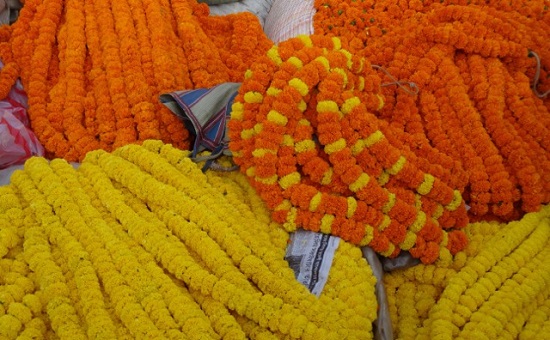 A Flight of Festivals

In India it seems that just as one festival ends, another begins. We experienced this firsthand in Kumartuli, a must-see district of Kolkata where statues of Hindu gods and goddesses are created from straw and clay. We arrived on the tails of the Durga Festival and days away from the Kali Festival, so we were able to see both the remaining Durga statues and the newly minted, or nearly minted, Kali statues.

We watched a statue of Durga being drawn toward the Hooghly River for her immersion in the sacred waters, the final chapter in the Durga Festival. The gnarly lion at her feet is her “vehicle”. These days there is a crane standing by to scoop the remnants from the waters in order to be kinder to the environment. 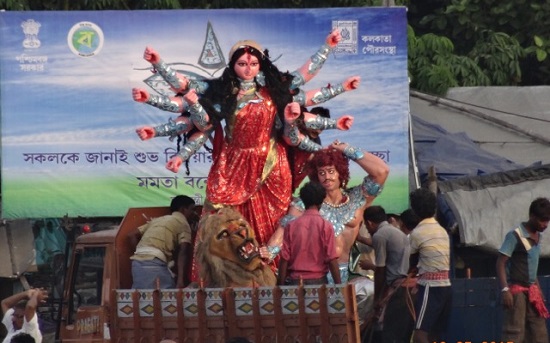 It was fascinating to see the fairly complex process of making the straw figures, followed by the layering and shaping of the clay, and then the final step of painting. The neighborhood was equally fascinating, replete with the quintessential organized chaos that is India. What better way to spend an hour or so? 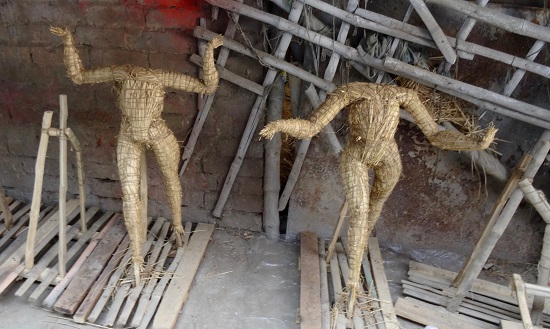 Finding the Mystical in Chettinad

From Kolkata we headed down to Tamil Nadu, India’s southernmost state. One morning in the city of Chettinad, we came across an easily overlooked gem, an unassuming Ayyanar shrine. We leisurely followed its path through a green glade lined with extraordinary clay representations of horses and the occasional elephant (the conveyance of the Ayyanar, as he does his duty patrolling and protecting the village). The path culminated in a peaceful, sunlit shrine dedicated not just to the Ayyanar, but also to fertility, which was used regularly by local women to pray for a child. There was a serene and mystical quality to the place (my photos do not do the horses or the shrine justice). Being there was one of my favorite moments on the trip. As shown in the photo below, two sisters and their brother very sweetly traipsed along with us through the shrine, giving Sam a flower garland to wear as a crown. The tiny gentleman next to me (apparently, at 5 feet, 9 inches, I am a giant) is the shrine’s gentle caretaker who lovingly maintains the area. 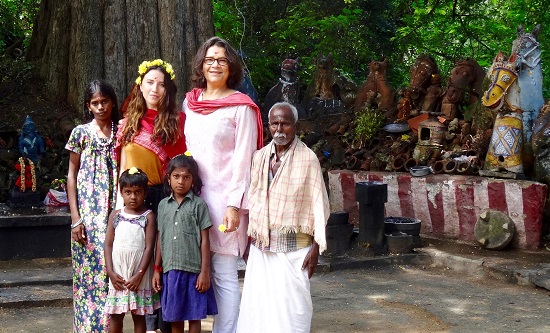 These are just a few of the horses that line the long path to the shrine. As you can see, they were originally painted and the newer models show some of the colors and patterns that once adorned all the horses. 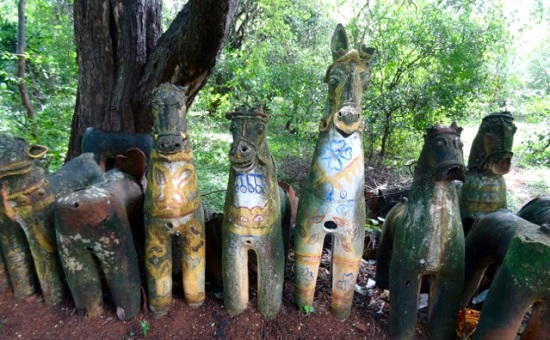 At the renowned site of Mamallapuram, you learn firsthand about monolithic versus structural architecture, and, very conveniently, you also begin to see the shift from Buddhist to Hindu design elements. In the photo, Sam is in front of the rock-cut Bhima Ratha, dating from the late 7th century. The building, carved from a single piece of granite, represents a ratha, or chariot, and is dedicated to Vishnu. 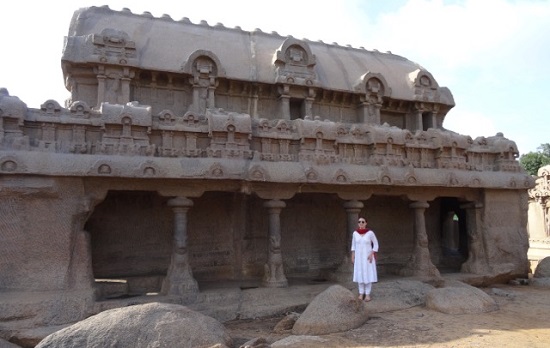 Temples abound in Tamil Nadu, and the experience of seeing them is inextricably connected to the culture of the region and its deep-seated devotion to spiritual life and beliefs. But the temples are not all serious and subdued by any means. To the contrary, everything about the temple environment is perpetually in motion, it’s shot through with kaleidoscopic colors, amazing history and soaring architecture, and just about everyone is friendly and thinks visitors are cool, especially if they’re Sam. Yes, Sam delighted this cluster of youths at the glorious Brihadeeswarar Temple, built in the Dravidian style of architecture during the Chola period. The temple celebrated its 1000th birthday in 2010! Makes me feel positively young. 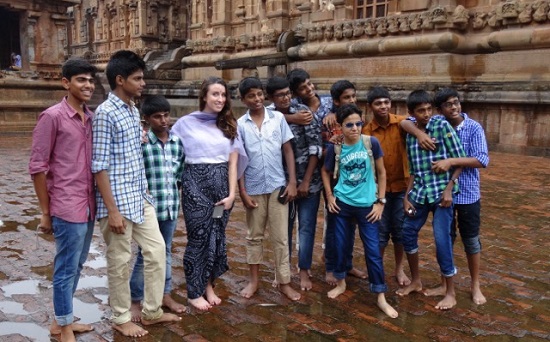 We weren’t sure which of us were the paparazzi, but it didn’t matter. 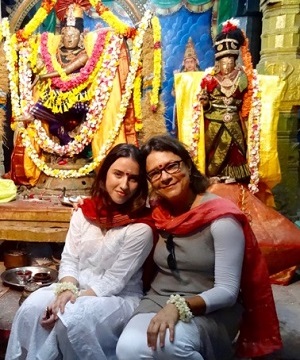 We couldn’t get enough of being blessed and receiving our tilak, mostly red, but sometimes white. At the Shiva temples one may also receive two parallel, horizontal white lines on the forehead, a sign of Shiva’s blessing.

We bought packages of bindis (the decorative form of a tilak) at the impressive Meenakshi temple in Madurai. Meenakshi is an avatar of Parvati, Shiva’s wife, and at this particular temple, Meenakshi takes center stage in the inner sanctum, rather than Shiva. The temple makes sure that every now and then Shiva and Meenakshi spend the night together, behind closed doors. It’s true.

The photo to the right shows Auntie and Sam just recently blessed and hoping for good karma.

“Oh, this is the most beautiful place I have ever seen,” Sam exclaimed looking out the window. We had driven from the heart of Tamil Nadu into Kerala and were now climbing into the tea plantations of Munnar. “Really?” I replied, thinking back to the incredible scenery I’ve been lucky enough to see across Asia. But then as we continued winding through lush green hillsides, I had a significant change of heart and a brief moment of humility: the landscape did indeed wow me. It was rainy and very misty and quite beautiful. 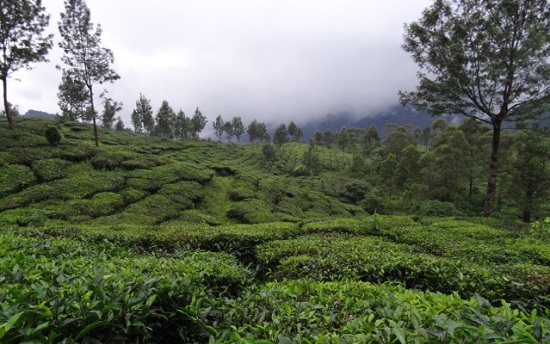 Kettuvallam Cruise on the Kerala Backwaters

One of the best ways to experience the beautiful lagoons, canals, and lakes of Kerala is aboard the local houseboats, known as kettuvalloms. It can be downright luxurious. Here is Sam on the backwaters, or is that Angelina Jolie? 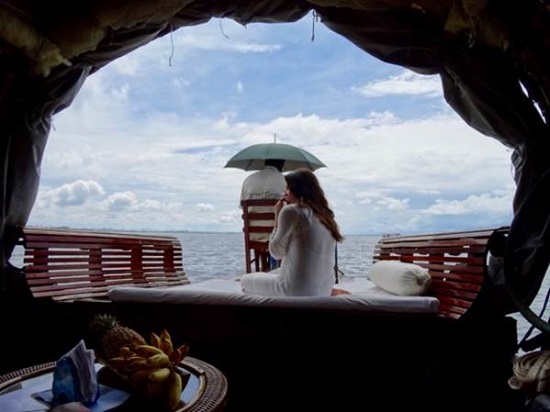 Bidding farewell to southern India, we shot up to Srinagar, the largest city of the far northerly Kashmir Valley, where it was already winter. Even under steel gray skies, houseboating on Dal Lake had the power to enchant. There we are in the ubiquitous shikara (the wooden boats symbolic of  Kashmir) en route to our delectable accommodations aboard the Sukoon, where, between the décor and the personal service, we felt like princesses. 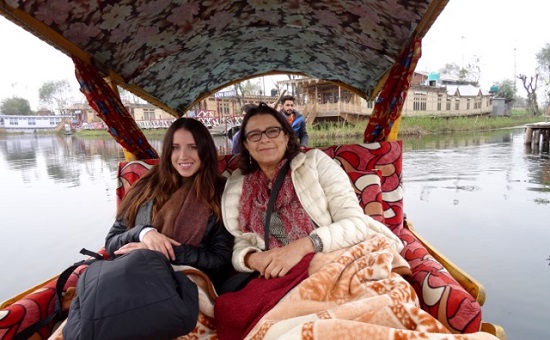 Following our visit to Dargah Hazrat Sheikh, the very famous Sufi shrine about an hour from Srinagar, we took a moment to savor the aroma and admire the bright colors of the local sweets. 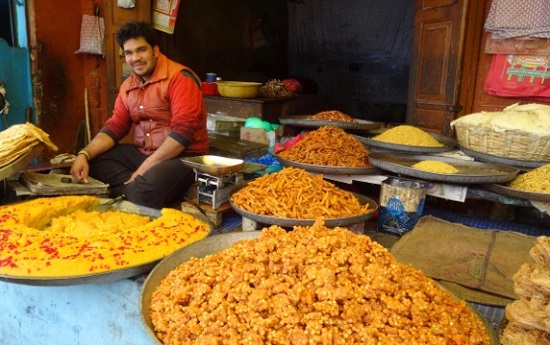 Sikh Traditions at the Golden Temple

Our next stop was Amritsar in the Punjab state, where it was still summer-tending-to-fall. We first saw the Golden Temple (a.k.a. Harmandir Sahib) late at night, in time for the daily ritual of putting the sacred text or Sri Guru Granth Sabhin to bed. I do not overstate when I say the temple, shining like a beacon, mesmerized us and we were eager to return for a daylight exploration the next morning. 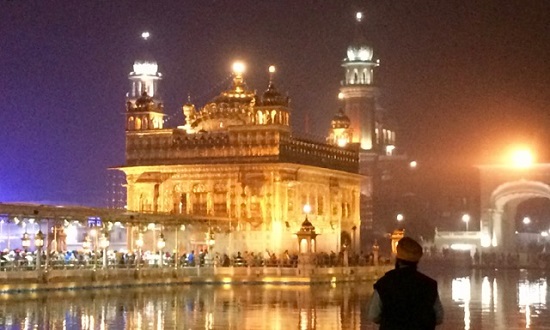 When you arrive at the temple complex, there is a vast courtyard that you enter first. If you are a man, you grab one of the triangular orange scarves provided and cover your head, and if you are a woman, you will be brought a scarf to do the same. Then you walk through a pool of water as an act of purification, at which point you may enter the temple. Beautiful live music is played by musicians within the temple all day, until the book is put to bed each night. Also at all times, while the book is in the temple, there are specially designated individuals reading the book from beginning to end and then starting again.

The langar or community kitchen at the Golden Temple offers meals to any and all, serving as many as 40,000 people on any given day. Sam and I each took a turn stirring an enormous pot of dal lentils and feeling, just for a moment, part of the inspiring volunteer endeavor. 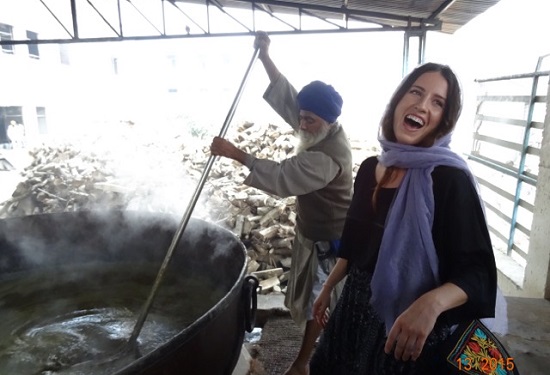 The temple uses three types of fuel (wood, gas, and electricity) so that should one source of fuel not be available or functioning properly at any given time, they can continue to offer meals. The chapattis are both made by hand and cooked in the traditional manner and are also prepared on a modern electric chapatti maker. There are no sign-up sheets, no particular times you are supposed to appear; there is simply a constant flow of volunteers who make this kitchen function. And anyone can volunteer. I’m hoping to improve my chapatti-rolling technique next time I go. 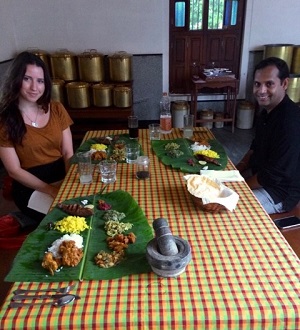 Speaking of food, the cuisine in India is varied and delicious. Sam fell in love with the dosa, a crêpe inextricably linked to south Indian cuisine that’s made from fermented rice batter and black lentils, and often filled with potatoes, served with sambar and coconut chutney. So large, so yummy. I never thought a fish curry would really appeal to me, but the dish is divine. In Kerala, the traditional plate is a banana leaf and you eat your meal with your hands. At the beautiful Visalam, we had such a lunch, and each of the mounds you see on the leaf had its own unique spices and delicate to bold flavors.

Don’t tell our Keralan guide Rishi, who is a dream, but I think my favorite dessert, and Sam’s too, was the baked mango and yogurt concoction we had at one of the famous bakeries in Kolkata. I think it’s called Aam Doi and it is to die for. You could make a case for going to Kolkata just to partake of this sweet. 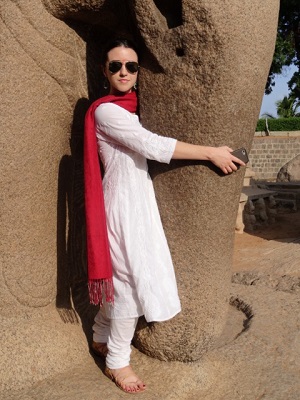 Here, Sam hugs the elephant trunk of a life-sized sculpture located at Mamallapuram.

Sam wanted to and often did hug animals, especially cows, in our path. The car echoed with squeals of delight at every, and I mean every, cow, dog, or monkey that we saw.

On our final drive from the Ananda Resort back to the Dehradun airport, there were a series of macaques parading, sunning, and scurrying about along the road, and every one elicited trilling delight, as though she were seeing a macaque for the first time.

To explore the options for your own India journey with GeoEx, give Sara or one of her colleagues a call at 888-570-7108.