GeoEx’s extensive experience and longstanding relationships in Cuba (we first took travelers there in 2000) go a long way in opening doors to GeoEx travelers. Our trip leaders have been guiding people through Cuba for years. They understand the nuances of the place, are practiced at getting our guests into restaurants and other spots when other people can’t, and are comfortable making on-the-fly adjustments as the country changes. Meet some of them below. 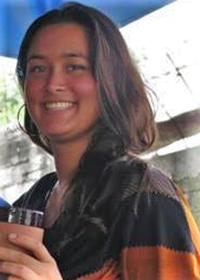 Audrey Brown
GeoEx Cuba Trip Leader Audrey Brown first fell in love with Cuban culture 10 years ago in Paris, after a chance introduction to Cuban salsa dancing. Soon after, she traveled to the island for the first time as study abroad student, deepening her love for its infectious musical rhythms. In 2014, Audrey returned to Cuba to work full time as tour manager and consultant. Over the past 4 years, she has had the pleasure of leading more than 50 trips and 800 people across the island. She is eager to help others experience this elusive country that, despite its proximity to the US, has yet to share its warm and fascinating culture with many Americans. It brings her tremendous joy and honor to help create authentic and accessible glimpses into the whirlwind experience that is Cuba.

Tony Pandola
GeoEx Cuba Trip Leader Tony Pandola has over five years of leading trips in Cuba. Tony still loves introducing travelers to the island’s most interesting and little-visited corners, adeptly navigating the country’s regulations and smoothly adjusting to last-minute changes. “It’s been wild seeing the country evolve over the last years, especially recently,” Tony explains. His studies in US-Latin America Cold War relations at the University of California, Davis, help him frame Cuban history for his guests, while they explore the nation’s new direction.

Fluent in English, Spanish and Portuguese, he has lived, worked, and traveled in Latin America for more than 10 years, indulging and further developing his appreciation for the history, culture, music, and people. His experience runs the gamut from leading and managing adventure trips from Mexico to Patagonia to developing and directing an academic exchange program in northeast Brazil. Outside of Latin America, Tony has also led trips throughout Europe, Southeast Asia, and the US. He’s an avid musician, writer, cyclist, and mountaineer, originally from Lake Tahoe, California, and currently based in Berkeley.

“Tony was outstanding in every respect. He consistently anticipated needs and followed through. When unforeseen things happened, he remained cool. He stayed fresh and enthusiastic every step of the way. His knowledge of the local scene and ability to lead is exceptional. He was thoroughly professional and fun to be with. Tony, the Cuban people, and GeoEx’s emphasis on education are what made the trip outstanding.” – Laurel S. 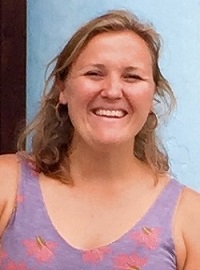 Joslin Fritz
GeoEx Cuba Trip Leader Joslin Fritz An international trip leader for the past eight years, Joslin has focused primarily on leading in Cuba since 2012. “My first trip to the Caribbean island made such an impression on me that I’ve come back again and again,” she says. “I am continually amazed by the ingenuity and entrepreneurial spirit of the Cuban people, and strive to create meaningful cultural exchanges for each of my groups.” Her favorite parts of Cuba are the remote and beautiful Baracoa, in the far east, and the culturally vibrant capital, Havana. “I know that the landscapes, architecture, culture and most importantly, people, will capture your heart as they did mine. I look forward to meeting you in Cuba!”

When not in Cuba, Joslin can be found leading in other countries, including Ecuador, Bhutan, Vietnam, and Cambodia. She also works as a river guide in Canada and Alaska. Originally from Boston, she has returned to the east coast after living in Seattle for the past few years.

“Joslin could not have been more perfect. Her personality was ideal for our group. She was enthusiastic, engaged, receptive to our many questions, and just fun to be with. Joslin seems very well liked around Cuba—she was greeted warmly by diverse types of people as we made our way through days of touring. She was also ever-vigilant about our food allergies, which was likewise appreciated.” – Gail & Jim L. 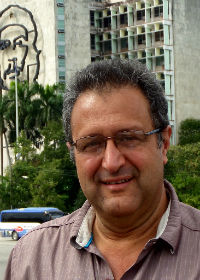 Alfredo Valverde
GeoEx Cuba Trip Leader Alfredo Valverde was born in Costa Rica, but moved to Los Angeles with his family at age ten. He holds a degree in English Literature and also studied Latin-American history, art and literature at the University of Costa Rica and UCLA. At age 30 he returned to Costa Rica for business, expecting to stay a few months. “But something happened; time slowed down for me. All of a sudden, I was much more aware of my surroundings: the mountains, jungles, rivers—but especially the people; they were so willing to spend time with you and each other, kid around and talk about whatever.” He began doing the same, and his “inner Latin American” awakened.

He began leading groups to Cuba in 2011 and felt an immediate connection. “In spite of the country’s controversial political system and lack of resources, I was fascinated by their architecture, landscape, music, socialist culture, adaptability, kindness, creativity and defiant spirit. The Cubans were survivors, just as I had once been.”

Since then, Alfredo has led close to 100 groups to the island, establishing close relationships with new and older generations of Cubans. “I’ve been fortunate to have received a privileged insight into Cuban society,” he says. “My mission as a tour director is to share that insight with my groups—but most important, to make the Cuban people feel comfortable about sharing their own stories with our travelers.”