As a young girl, I had always hoped to visit Russia someday. I was a ballerina with a crush on Mikhail Baryshnikov. I also had a matryoshka doll—the painted wooden figures of multiple sizes that split in half and nest inside one another—that I loved. Russia seemed so far away and very exotic.

When the time finally came to take the Trans-Siberian Express across Russia, I was beyond excited. I looked forward to discovering this mysterious country, to meeting some of its people, and to seeing its scenery. I thought going by train would be a relaxing way to travel—I had never spent a night on a train before in my life!

As soon as I boarded the elegant Golden Eagle, I knew for certain that I was in for a treat—even if I never left the train. I was warmly greeted and shown to my cabin to find a large window (where I would sit for hours watching the landscapes pass by). An attendant was available 24 hours a day to provide tea or coffee in beautiful pewter or glass mugs (I bought one as a souvenir), and there was a television for watching DVDs (available in the train’s library), a private en-suite bathroom (stocked with shower gels, a bathrobe, slippers, and a hairdryer), and nightly turndown service that included a note about the following day’s activities. I immediately felt spoiled. 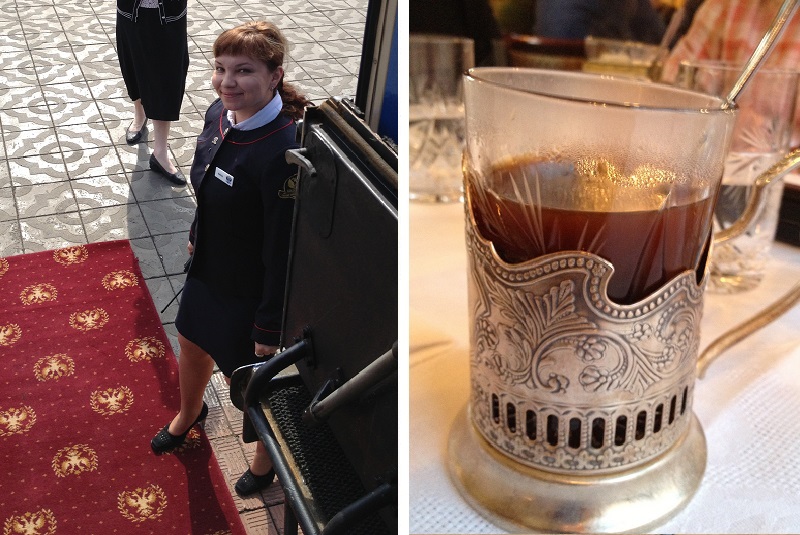 I’ve traveled quite a bit in my life, usually moving from place to place every day or two, having to switch hotels and coordinate logistics to do so. What a revelation it was on this journey across Russia to cover that enormous distance without ever having to repack my suitcase or adjust to a new bedroom! Instead, I sat back with my tea and watched towns and trees go by, chatted with other travelers over pre-dinner cocktails in the bar car, ate delicious meals (thankfully, there were usually more active touring options to counter-balance the calories!), and studied the Russian alphabet and some useful Russian words (pectopah means “restaurant”) during onboard language classes. 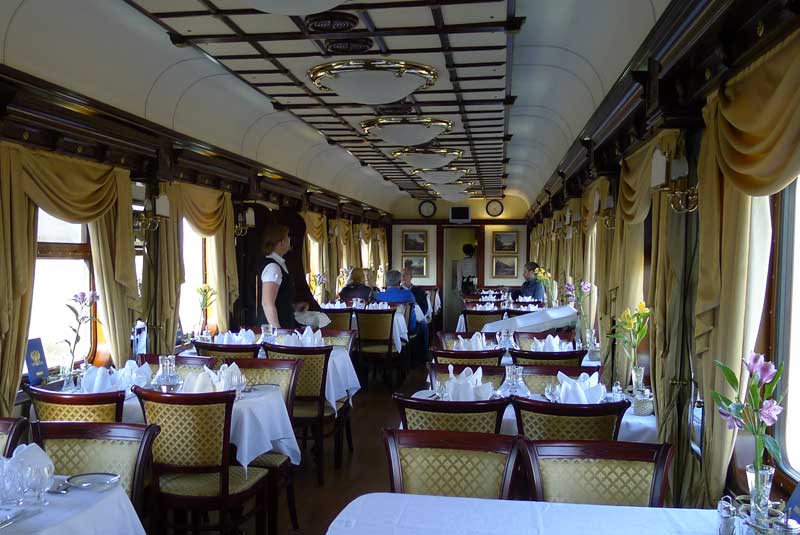 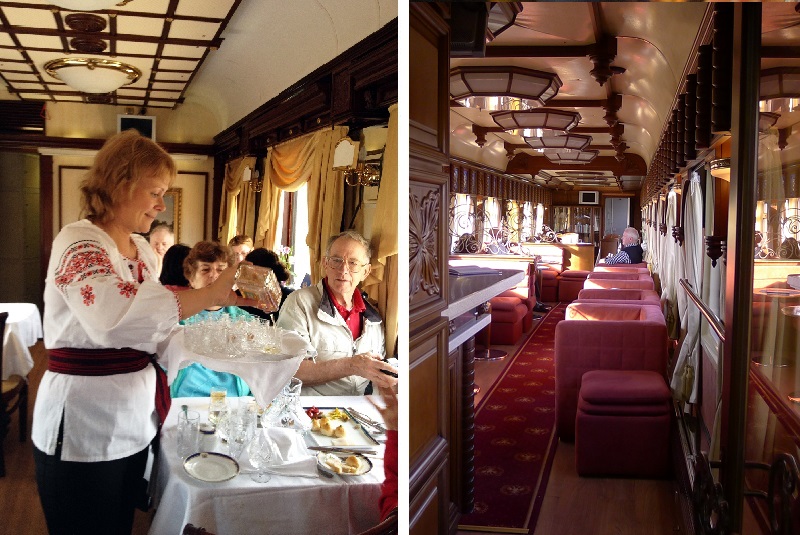 The landscapes were much more diverse than I expected. The forests were filled with beautiful white-trunk aspen and birch trees as well as evergreens, and there were grasslands, low mountains, rolling hills, sparkling lakes, quiet villages, wetlands (that I’m told bloom with wildflowers in late summer), and, of course, the immense Lake Baikal, where we feasted on fresh fish at a lakeside picnic amid falling flurries of snow: May in Siberia! 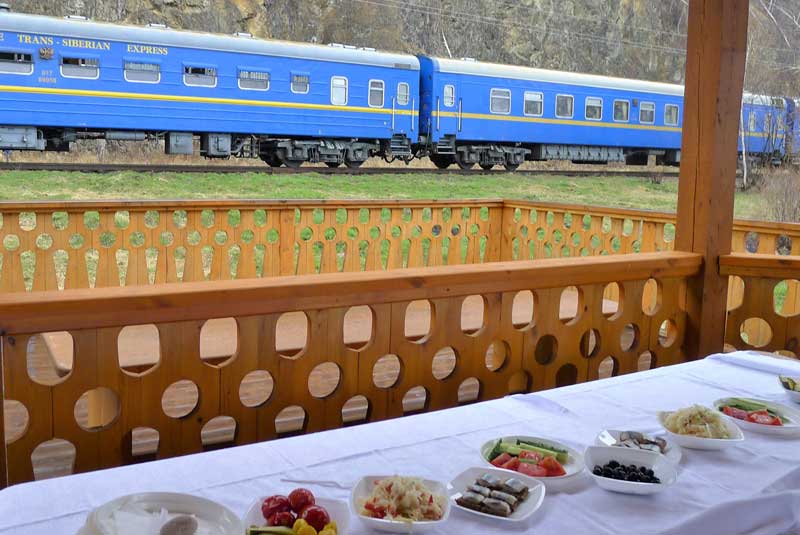 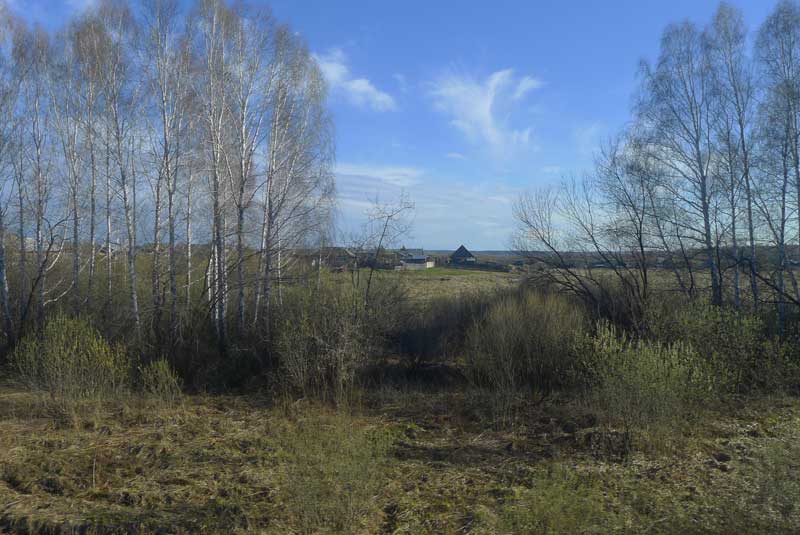 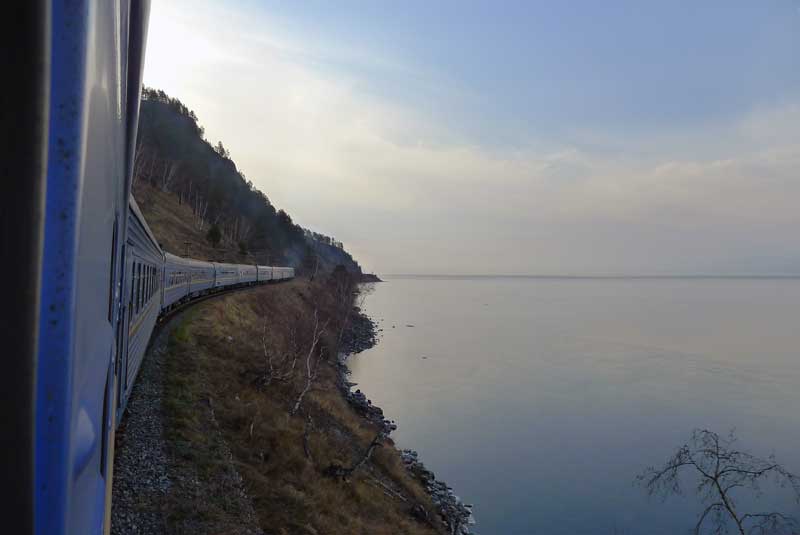 After starting in Moscow, the train stopped in many other interesting places, including Kazan (with its own impressive Kremlin), Yekaterinburg (whose famous monument commemorates the assassination of the royal family by the Bolsheviks), and Irkutsk (a sophisticated city in the middle of Siberia with beautiful old wooden buildings, fascinating history, and a bustling market). I was surprised by how passionate our local guides were about showing us their hometowns. They were friendly, enthusiastic, and warm—the opposite of what I expected based on the Siberia movies I’ve seen! They made the places we were visiting really come to life. 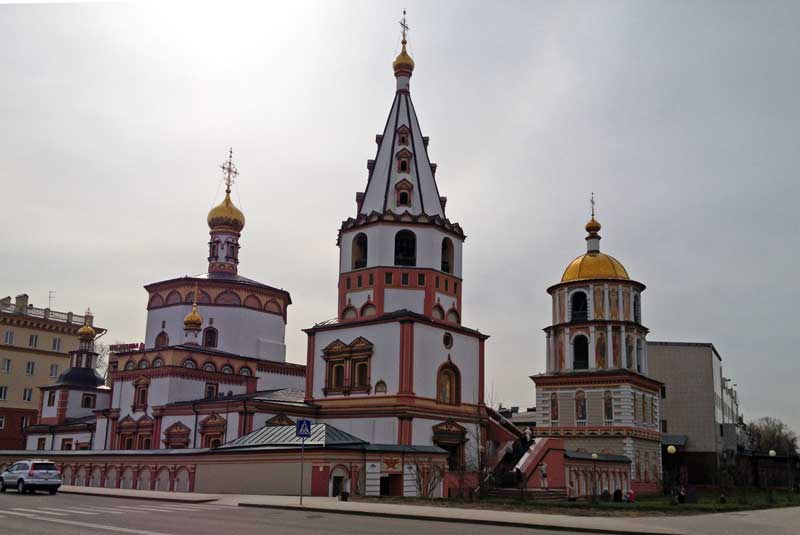 Our time in Novosibirsk coincided with Victory Day (May 9), a huge public holiday and celebration of the Red Army’s offensive against Nazi Germany. While I was roaming the square and listening to the band, a group of local college girls approached me to practice their English. It felt wonderful to connect with these women, so different from me but also so much the same. It reminded me how small the world is and how taking the time to speak with people from other countries can reshape your perspectives. 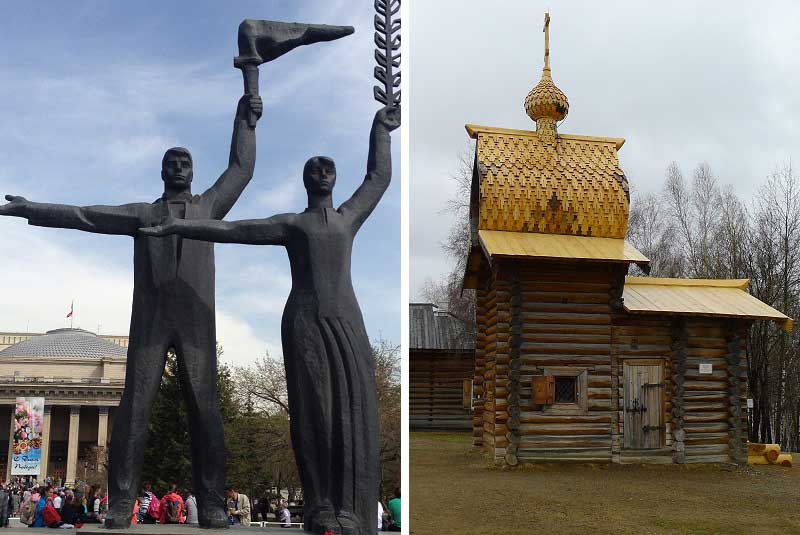 Feeling the Passage of Time

The Trans-Siberian Railway was constructed between 1891 and 1916—an amazing feat of engineering then that leaves some smoothness to be desired now. Traveling on it can be noisy and “clackety,” and since the train travels mostly at night, your sleep can be interrupted by the sounds and by the motions of the train starting and stopping. I found them to be part of the experience’s charm, almost like a soundtrack to the journey.

Another theme on the journey was changing my watch. Travelers who do the full Moscow-to-Vladivostok Trans-Siberian journey span 5,772 miles and cross eight time zones! I was only able to go as far as Irkutsk, so I didn’t have to contend with quite so many—sadly, that also meant I missed out on time in Mongolia, where the train headed next—but traveling on the Trans-Siberian in the eastward direction, as I was, I “lost” an hour every few days When you go west, you “gain” those hours instead! 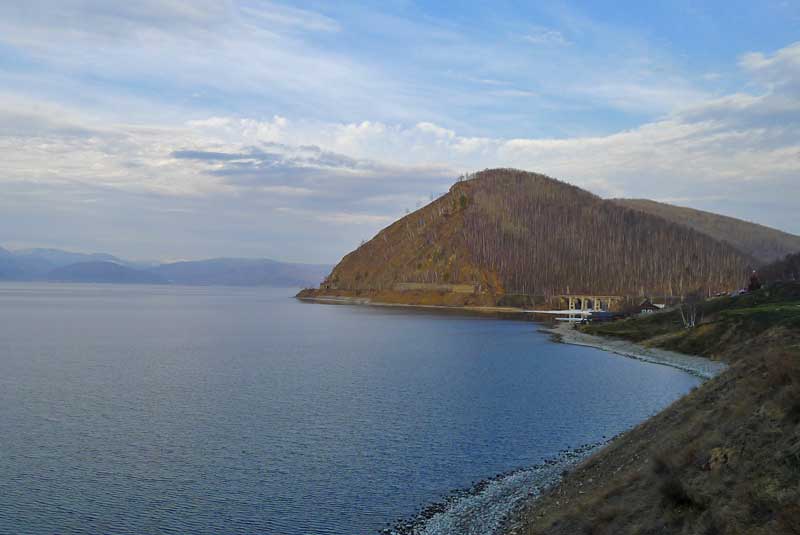 What I learned from my pre-trip and on-trip research is that each season offers something unique. Traveling in May and the beginning of June shows Siberia in early spring, with millions of birch and poplar trees sporting new bright-green leaves and a still-mostly-frozen Lake Baikal. In June, July, and August, the short Siberian summer is in full swing, with long days, warm temperatures, lots of flowers, and the opportunity for a refreshing (i.e., chilly) dip in Lake Baikal. In September, early fall is in evidence with pleasant temperatures and some of the birch and poplar trees starting to turn bright yellow. 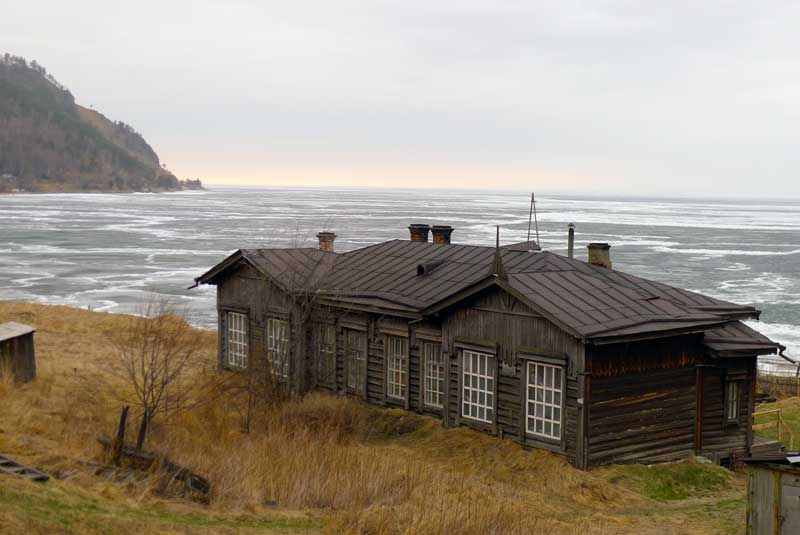 And believe it or not, you can even go during winter in February and March. I’m told that everything is covered in snow and it looks like a fairytale—especially the towns of Suzdal and Vladimir, which the train doesn’t visit at other times of year. It is very cold (average lows of minus 10 degrees Fahrenheit in Irkutsk), but the train is nice and cozy, and guests are provided with a pair of warm felt boots. Plus, the winter season gives you the chance to go ice fishing, dog sledding, and snowmobiling on Lake Baikal.

I ended up traveling in May, but truth be told, I would have been happy to go any time of the year to make the little girl in me pirouette for joy at finally visiting Russia. I’m sure she’d be delighted to know that I came home from Siberia with a new, beautifully hand-painted matryoshka doll, understanding much better after the journey where the pieces come from and how they fit together.

GeoEx’s Sabrina Middleton has waddled with penguins in Antarctica, cuddled koalas in Australia, hiked to Machu Picchu, gone swimming with sea lions in the Galápagos Islands, and much more during her 22 years with GeoEx. 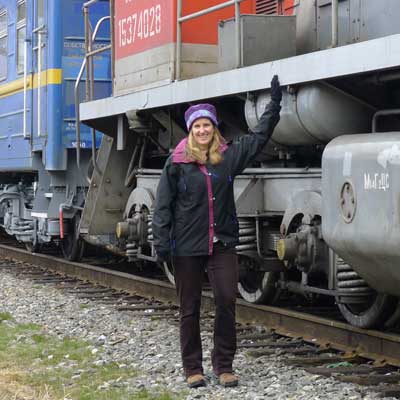